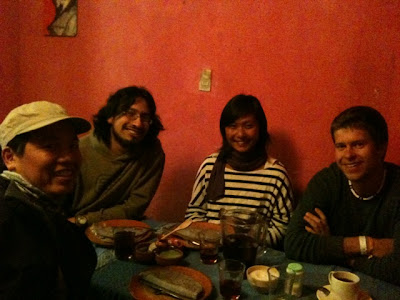 In San Cristobal it just so happened that I met a number of people and it was a good time to be social.

There was Gloria, a homeopath psychologist from Guadalajara that was vacationing and exploring the spiritual side of life. There was Lukas, a guy from the Check Republic that was heading to Quetzaltenango, Guatemala to study Spanish for a number of months. There was Sue, a Korean German girl that was taking time to travel between jobs and going to explore the ruins in Palenque and Tikal. There was Amaya, a Dutch girl that was studying in San Miguel Allende but taking an excursion to San Cristobal. There was Christian, a local social anthropologist and instructor at a local language school that gave me a tour of the city, introduced me to a really great huaraches restaurant and screened some documentaries for me about Chiapas. There was Art, a guy from Hawaii that works half of the year to save enough money to travel for the other half. There was Candy and Arecelli, two local girls that while working would joke and sing and just have a good time.

I may have spent a few days or a day or an evening or a meal or maybe just an hour with each of these folks. But the time was sweet. I think that I learned something from each person and encounter. I hope that I may have enriched their lives in some way.

It's funny how people from all over the world can be so different, but when put into the right circumstances can share so much in common... travelers.