Crossing The Darien Gap from Panama to Colombia UPDATE as of April 2015. The roll-on roll-off ferry service Ferry Xpress to cross from Panama to Colombia has suspended their service.

The Darien Gap is a 30 mile stretch of land that lies between Panama and Colombia. It is thick jungle that is pretty inhospitable to most human beings. There are some indigenous people, guerrillas and drug runners that do inhabit the area.

There was one group of adventure motorcyclists that crossed through the Darien Gap in 1995 on specially modified motorcycles. Their journey is documented at Outback of Beyond.

I looked into option 1 and it didn't really appeal to me. It was not really cost effective and some of the logistics and paperwork seemed problematic.

Option 2 was a real option. I actually rode from Panama City on the west coast to Portabelo on the east coast to investigate this option. By phone a guy named Captain Jack said that there were three sailboats leaving over the next few day. When arrived to check it out, it wasn't true. It is somewhat late in the sailing season and there were not any sailboats leaving until after Christmas. Also, if I waited and elected for this option I would have to complete the paperwork myself.

This left me with Option 3. I contacted a company called Girag and inquired about cargo flights. Each day Girag would tell me that there might be a flight and they would let me know. However, they would only give me about an one hour advance notice. Not a lot of time to pack, ride and prep the bike for shipment. After a few days of missed connections and flights I made it work.

I was in the town of Portabelo on the eastern side of Panama checking into the sailing ships. After finding out that there were not any sailboats leaving this week, I sent an email to Girag inquiring if they had any flights available. I received an email at 3pm stating that I would need to turn over my bike before 4pm to prep it for a flight leaving the next day at 7am.

I sent an email back that I was on my way, even though I was on the other side of the country.

I hopped on Emi and rode. The ride across the country is only about 1 hour in good weather. Luckily the weather was holding up.

Until about 45 minutes into the trip... then it started to rain... and then the traffic slowed down. I rolled into Panama City at about 4:30pm, but still had to cross the town to the airport on the other side of town. I rode through the rain and reached the dock of Girag at 5pm. When I arrived the door was locked.

I looked around the dock and eventually found someone. I mentioned that I was told that I could turn over my bike for preparation for shipment for the 7am flight. To my surprise... they said okay! 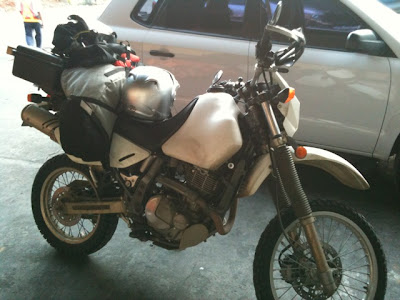 I unloaded all my bags, disconnected the battery and siphoned out most of the gas. I completed one page of paperwork and turned my baby over to Girag.

I then caught a ride over to the passenger terminal to book a ticket with Copa Airlines to transport me.

The ticketing agents were not very helpful. I believe that it was the end of the day, they were ending their shift and they did not want to book a last minute flight. I did understand that it was probably one of the busiest times of year for them, right before Christmas. They shuffled me between the ticketing counter and the departure counter. Each desk telling me that the other would help out. Each desk telling me that there were no flights available over the next few days. They also told me that I could not buy a one way ticket to Colombia, that I was require to buy a round trip ticket or show proof that I would be leaving the country.

Eventually, one of the ticketing agents said that I should show up early in the morning and try to fly standby. I resided to spending the night in the airport and trying my luck the next day.

I found a cafe to eat dinner. I was fortunate in that the cafe had internet access. I used my iPhone and Kayak.com to check for fights between Panama City and Bogota. Turns out that there was one seat available on the second flight of the day at 7:45am. I booked it. 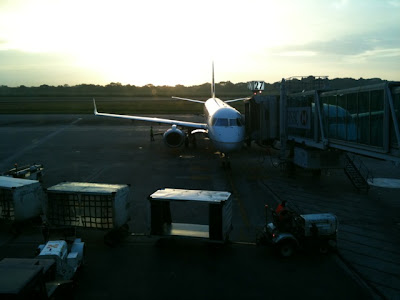 I spent the night in the airport... woke up early the next morning.. boarded my flight... 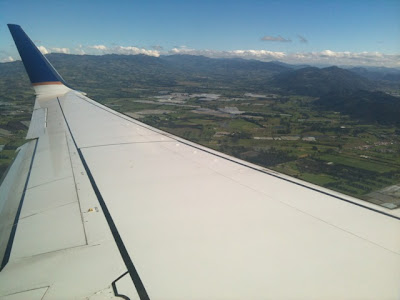 I caught a free shuttle to the cargo terminal and found the Girag office. They told me that the cargo flight had not yet arrived and that I should return at about 4pm. I took this as good news. They had a nice little lounge with a cafe and some vending machines. I bought some food, found an ATM in the FedEx office and withdrew some Colombian Bolivars and kicked back and rested in their lobby. 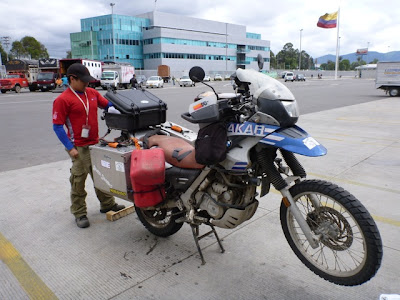 While waiting I came across another adventure motorcyclist name Ken who was riding a BMW Dakar. He had arrived the day before, but had just received his bike and completed the paperwork. He was on the receiving dock inspecting and prepping his bike to ride. We talked a little and exchanged info. 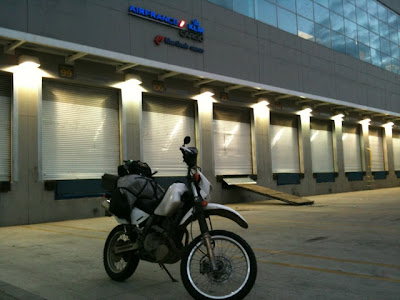 At around 3:30pm Girag notified me that my bike had arrived. They handed over the keys and bill of lading. I went to the customs office to complete the paperwork. I was done within 30 minutes. I went back to Girag to take delivery of my bike. When they pulled my bike up to the unloading ramp I inspected it. There was some cosmetic damage to the sides and the handlebars seemed to be misaligned. They probably dropped Emi on her side. I reconnected the battery and started her up... she seemed to be okay. I torqued the handlebars a little and got them back into shape. Emi is a tough girl. I signed the paperwork and rode my bike down the loading ramp onto the dock.

I grabbed my bags from the Girag office and I was ready. I asked a local motorcyclist who was hanging around the dock if he could show me the way into Bogota. He obliged and I rode into town. I found a hostel called the Platypus which I planned to make my home for the next few days.