The Señoritas of Puebla, Mexico

Puebla is a beautiful city with very friendly people. From the staff at my hotel, to the man at the candy store, to the people that I often stop to ask directions, they've all been wonderful.

One night I went out to dinner with some other travelers Brock and Leila. We were walking along one of the corridors that border the zocalo (central plaza). There are restaurants all along the corridors with outside seating. As we were walking by this one table I got the feeling that I was being watched. It's the thing to do at the zocalo of course. So I looked around and there was a table of five señoritas looking at me. I overheard one say, "Yo quiero una photo" (I want a photo). I think that she was thinking that I wouldn't understood what she was saying. I turned back, gave her a quick glance and smiled. This only encouraged her. She stood up and said with a big smile, "Photo, por favor".

So I turned around and walked back to their table. They were really excited.

Each of the girls had a camera and wanted a photo with their own camera, so we took five photos. Then I gave one girl my camera and she snapped this shot. 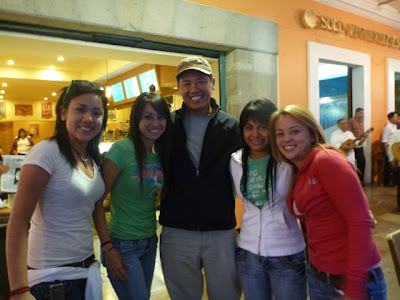 Cute señoritas, yes. The one in the green was the instigator.

Brock and Leila were kind of surprised. They actually thought that I knew the girls. Believe it or not, this happens to me every couple days. It's tough, but someone has to work on international relations with Mexico. I'm here, so I may as well do it.
By Troy - October 09, 2011