It Happened... An Accident

It was Saturday morning. After spending a few wonderful days in Puebla I was planning to visit a small town about 20KM from Puebla called Cholula. I had made contact with a Peace Corps Volunteer named Jan that had agreed to be interviewed for my media project.

I packed up my things and headed out from the hotel. I had a map that would lead me to the site. I was traveling down the road following traffic. The bus in front of me suddenly decided to move from the right lane, the lane that we were in, to the left lane. I quickly found out why. In the middle of the road was a taxi at a complete stop. I tried to slow down then swerve to miss it. I was able to avoid a direct hit, but I clipped my lower leg on the bumper.

The bike and I went down.

Thankfully, the traffic behind me stopped.

My first reaction... I was pissed. Why was this taxi stopped in the middle of the road. My second reaction... I humbled myself. I realized that I was in Mexico and needed to collect myself and assess the situation. I've lived in and traveled through many countries before. When doing so, I'm always aware that I'm just a visitor and must play by their rules/laws. I knew that I'd have some explaining to do. I quickly realized that I needed to move my bike and get off the road. Before this could even happened there were two traffic police officers on the spot. They told me not to move the bike, they wanted to take some pictures. And, they asked me if I was okay.

Oh yeah, I think that the adrenaline was pumping through me. I hadn't even really stopped to make sure that I was okay. I walked to the side of the road and did a quick body check. Everything seemed to be okay, except that I had some scrapes on my leg and it felt a little numb. I could walk okay. I've always had a pretty high tolerance for pain though. I was riding ATGATT (All The Gear All The Time). A motorcycle acronym that means helmet, jacket, pants, boots and gloves all designed for motorcycle riding. All the gear held up and wasn't even scraped. After a few minutes and a complete body check I felt like I was okay to sort out the mess.

The police had already taken their photos and had picked up Emi, my bike, and moved her to the sidewalk. The taxi driver was out of his car and had looked at the damage to his car. The police officer asked me for my drivers license and insurance. I had both. I provided him the International Driving Permit that I had purchased from AAA in the states because it contains translations in Spanish. I provided him a copy of my Mexican insurance that I bought online from www.mexisurance.com and underwritten by Qualitas. As soon as the officer realized that I had my paperwork in order he was quite helpful. He pointed to the Qualitas logo and said "no problema". I was thankful that I had purchased it and that it was from a reputable and known company. I'd heard that auto insurance was not required in Mexico, but if you do have an accident and you don't have it, you might spend some time in a Mexican jail for a few days.

The police officer filled out some forms. I started talking to the taxi driver. He pointed out two spots that he felt I damaged. I wasn't going to admit to anything, but I was pretty sure that one of the spots was from a previous accident and not caused by me. Anyways, the officer said that we could all go to his office and work this out with the insurance. It would take about 45 minutes. My first thought was, I don't really want to go to a police office. My second thought was, I want to take care of this as soon as possible and get going. I overheard the taxi driver say something about "en effectivo" to the officer. "En effectivo" translates to "in cash". The officer turned to me and said that we could either go to his office or this could be handled "en effectivo". I said, "Cuanto seria (How much)?" The taxi driver said, "Quinientos Pesos (Five hundred pesos)." I did a quick calculation and 500 pesos is about 40 US dollars. I said, give me a minute and let me see. I didn't really need a minute. I knew that I wanted to settle this now and in cash. I walked away a little distance and searched through my wallet to find the cash. I returned and said, "esta bien (okay)".

The police said okay, then we will not need all your paperwork. He gave it back to me. He did ask me to sign their report and write on the report that I agreed to pay the sum of 500 pesos for the damage that I caused. I signed. I handed over the money. And the taxi driver looked like he had just won the lottery.

The police officers asked me where I was going. I told him. He said that he would show me the way. I was a little skeptical, but hey, I'm a law obeying non-citizen. He drove a little distance then pulled over to the side. He got out of this car and then gave me some directions. The last thing that he said was, "Bienvenidos a Mejico (Welcome to Mexico)". I actually found some humor in it and laughed to myself. Yes, welcome to Mexico... the adventure begins...for real, now. 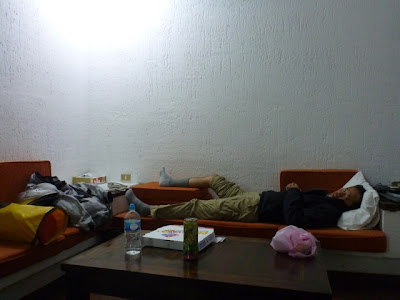 So, I did make it to Cholula. Emi seems to be fine, barely a scratch on her. Me, I'm a little banged up. I decided to take a few days to allow my leg to recover. 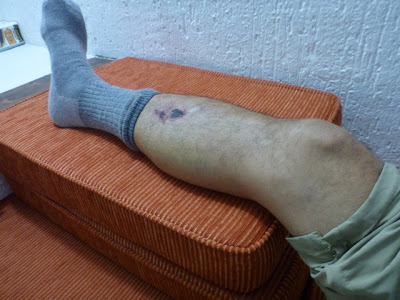 After reflecting on this experience I've come to a few conclusions.
1. God was watching out for me. Yes, I'm a believer. And, I believe that he saved me. The accident could have turned out much worse. I could have hit the car directly. I could have hit the street much harder. I could have been hit by the traffic behind me. I could have injured my leg much worse. I've had a number of people praying for me back home and I believe that prayer works. God is amazing. He has a plan for my life. For some reason, He kept me alive to live out that plan. If you're a none believer, that's fine. But if you knew the God that I know, you'd know that he is pretty awesome.

2. I made a few judgement errors. I was in a bit of hurry to make an appointment, when I should have been taking my time. However, I wasn't speeding. I was navigating with a map, when I should have studied the map more thoroughly ahead of time to familiarize myself with the route. I had a space cushion, but could have created a larger cushion. What typically causes an accident is a series of events. I believe that these were the series of events that led up to the accident. Hopefully I've learned my lesson, I'll be mindful of these series of events and prevent them from happening again. 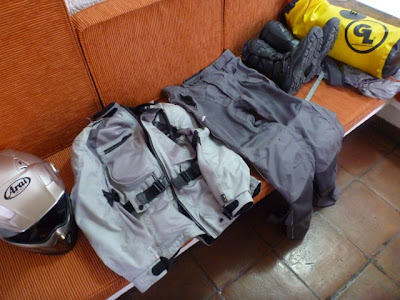 3. ATGATT! I ride with All The Gear All The Time protection designed for motorcycle riding. The Gaerne G Adventure boots were the last item that I purchased before I left on my trip. I believe that they saved my leg from a much more serious injury. The Olympia jacket and pants held up well. They didn't even have any scrapes on them. Also, I'm using soft luggage on my bike, a Giant Loop Great Basin Bag. The bag made contact with the ground, but barely had a scrape. I think that it may have even prevented damage to Emi. Good stuff.

4. The locals were great. The two police officers were very professional. First, they asked me if I was okay. They helped me move my bike. They helped facilitate the settlement. And they even provided me directions. I'm wondering if they will share those photos with me. I didn't take any. They'd be great to add to the blog. There was a bystander that stopped and asked if I needed a translator. There was a shop keeper that came out and made sure that the police were being helpful. I must say, that even the taxi driver was pretty understanding. Thanks, good people of Puebla, Mexico!

5. Up until now, everything had gone smoothly. The boarder crossing was easy. The towns and sites were fantastic. The rides were amazing. The lodging was great. I'd been taking some chances with some food, but even that wasn't causing any problems. I've always told myself and others that trips that go according to plan are rarely memorable. When I've taken an organized trip like a cruise, I usually can't even remember what I did the week after it is over. No, adventure is unpredictable, sometimes dangerous, sometimes bad things happen... but it's always memorable... and worth it. You just have to work your way through it... and live to tell the tale.

Now I'm taking a little time to relax, recover and reflect. My leg is better, but not totally healed. I do have health insurance so I may have my leg checked out if it isn't better in another day.

I just wanted to let ya'll know that I'm okay... and that the adventure will continue.