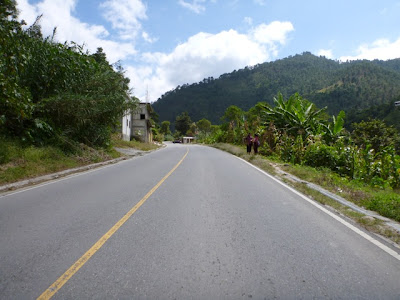 It was time to leave San Cristobal and Mexico and move on to Huehuetenango and Guatemala. I headed south on Hwy 190 which turned into CA1, the Pan American Highway. This road would take me across the border and into my next country, Guatemala.

When i arrived in Cuauhtemoc, I went to the Banjercito (bank) first to clear my motorcycle permit. I passed by Aduanas (Customs), but they waived me through. Finally I passed by the Migration (Immigration) to clear my tourist visa. I was the only one in line and it probably only took 10 minutes total.

Then I went La Masilla and the Guatemala border. I had purchased Guatemalan Quetzals the day before. I went to the Migration first and got my passport stamped. He didn't charge me anything. I passed by the Aduanas and completed some of the motorcycle paperwork. The officer created an invoice that I took to the bank next door to pay. After getting the receipt, I went back to the Aduanas where he completed the paperwork and provided me a temporary license and registration sticker. It took maybe 30 minutes total. Again, I was the only one in line. I looked around the town of La Masilla for a motorcycle insurance office or salesperson, but everyone kept telling me that insurance was not needed. I'm a little reluctant to ride without it, but I'm on the road.