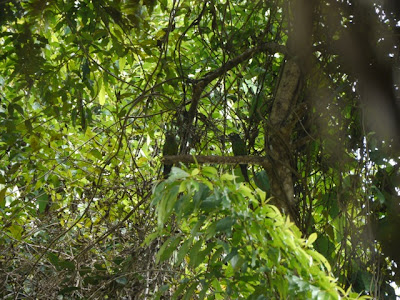 I woke up at about 6:30am to sounds of the rainforest. Wind was rustling through the trees and parrots were cackling in the background.

After breakfast, Sophie and Rudy were leaving, so I saw them off.

Then Clever, my guide, and I set off in the canoe to do a little fishing Amazonian style. 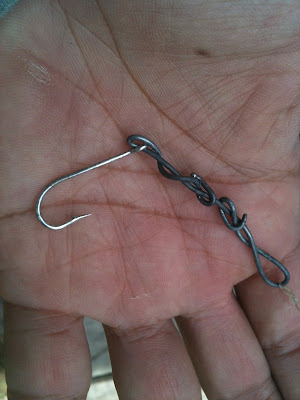 You take a hook, secure it with some 10 guage wire, tie it to some 20 lb test fishing line and tie it to the end of a 5 ft long pole made out of a tree branch.

Then attach a raw piece of carne de res (beef) to the hook and drop it in the water. With the tip of your pole you then stir the water and make a little noise. This technique is contrary to any fishing technique that I've every heard of, but... 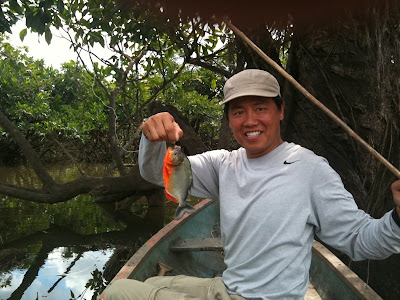 It works great for catching piranha! The 10 gauge wire works as a leader and pro vents the fishing line from being snapped by the piranha's bite. 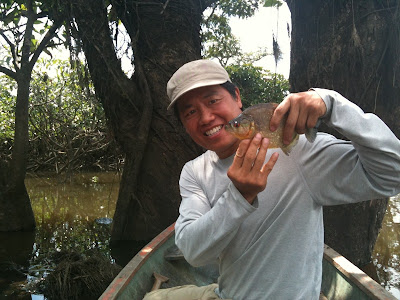 There are red piranha and white piranha...and they both have very sharp and menacing teeth. The sound attracts them and the beef entices them. The don't put up much of a fight in the water, but once you pull them out of the water...watch out...they shake and squirm. If they happen to fall off the hook and into the boat you have to watch your toes. 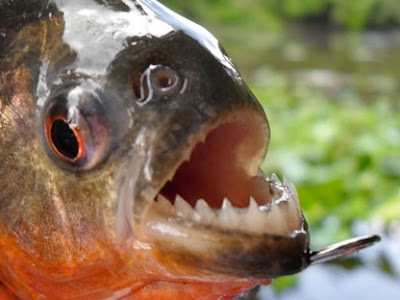 Once these little buggers lock on to something they really hold on.

I caught about half a dozen and released them all. Supposedly the piranha are not very tasty to eat. After I had fed them enough steak for lunch I returned to the lodge for lunch myself.

I laid around a bit in a hammock waiting for Jorge, my guide, and a new group of travelers to arrive at the lodge. 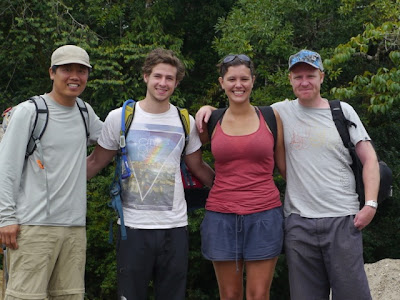 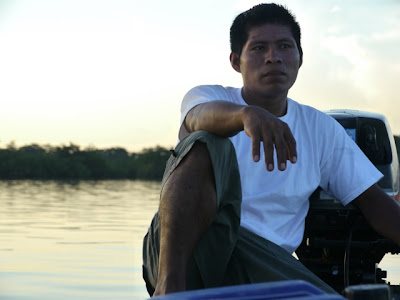 In the afternoon we went out on the motorboat looking for an anaconda. Clever was driving the boat from the back. 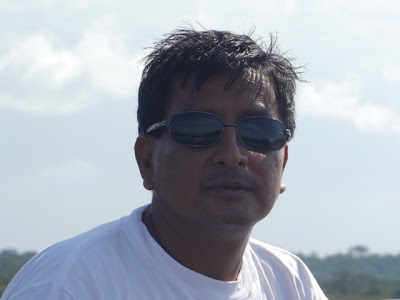 Jorge was navigating from the front.

We got a tip from one of the other guides that was cruising the river that there was a large anaconda perched on its nest. Jorge got the directions and we were off.

By the time that we arrived there were already 3 or 4 boats rapidly approaching the nest. The snake slid into the water and disappeared. With the snake gone, the other boats cleared out and headed in a different direction. We were all a little disappointed that we didn't get to see the snake.

Jorge wanted to show us the nest, so we approached the area quietly by paddling. 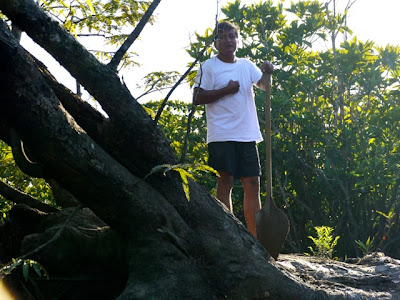 When we arrived at the nest, Jorge looked around a bit, got out of the boat and stood on the nest. He started explaining about some of the characteristics of the anaconda...how the snake builds the nest, where it stays during the day, where it stays during the night, how it hunts, what it eats. On a sunny day an anaconda will sun itself on its nest or a tree. It will hunt in the mangroves. It eats whatever it wants, but typically eats fish, birds, small mammals and cayman. 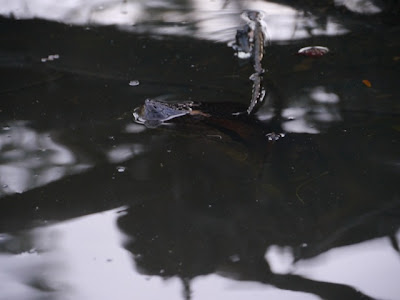 While he was talking he spotted this. 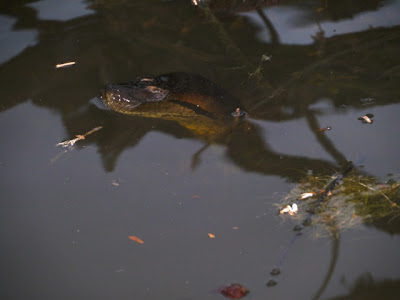 Which eventually turned out to be this... the anaconda. It had retreated to its nest and was sticking its head out to see what was going on. Just its nose at first, then its head. I snapped a few photos, then it disappeared again below the surface. Catching a glimpse of the anaconda was great. The way that we snuck up on it... or the way that it snuck up on us... was even better. We decided to leave the snake in peace.

We continued on our little animal watching excursion. 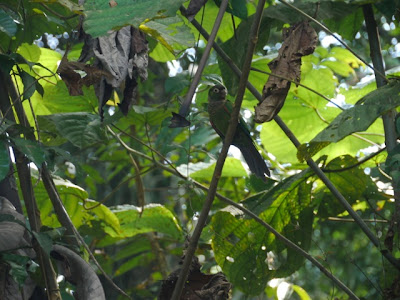 We saw some green parrots... 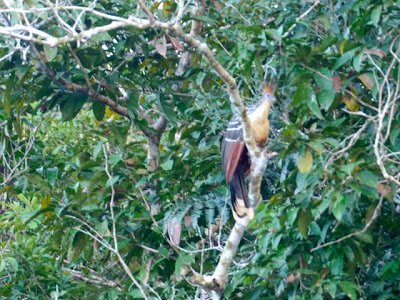 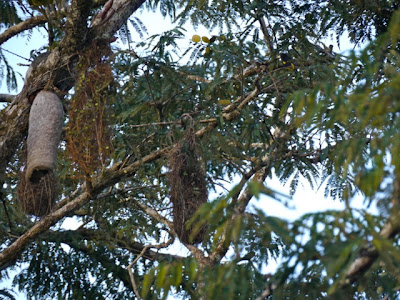 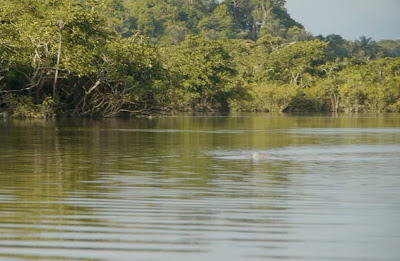 On the way back to the lodge we saw a gray dolphin. See the ripple in the water... it's a dolphin. 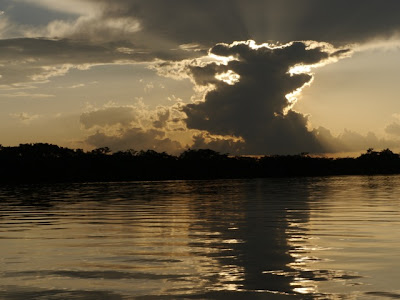 It was getting late so we caught this sunset, then returned to the lodge to have dinner.

After dinner, we went for a walk into the rainforest in the dark. 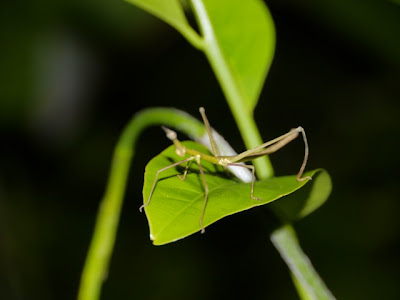 We found the littlest of creatures stirring about... like this walking stick... 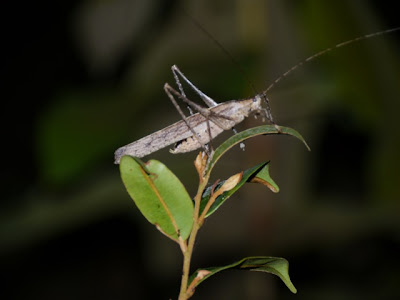 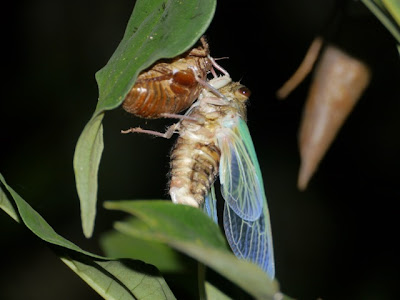 And a Cicada going through metamorphosis.

We heard some night monkeys up in the trees, but it was difficult to get a clear view of them in the dark.