Santiago, Panama... A Toilet and A Little Luck

The next day I set off from the town of Volcan to Panama City. It would be a full day of riding in the rain. I stopped in the town of David for lunch at a McDonalds. Then rode on...

I eventually ran out of sunshine. It started to rain. Not a drizzle, not light raindrops... it was pouring rain, the wind was blowing sideways and I was getting pounded. I wasn't anywhere near a town with a hotel, so I kept riding. Then it turned dark. I slowed down to about 20mph and let traffic pass by. There were a number of cars that were simply pulling over to the side of the road. I didn't feel that it was safe to park on the side of the road on a motorcycle, so I kept riding.

Riding in the rain and dark is no fun.

I finally came across a gas station. The owner said that there was a town about 20 minutes up the road.

While we were talking another adventure motorcyclist on a Kawasaki KLR pulled up to get fuel. He was coming from Chile and heading to Mexico. We talked for a while. Ends up that he was a filmmaker from Chile named Miguel Sanchez. We exchanged information. He said that when I make it to Chile he would connect me with some places to stay. I made him the same offer about Texas. Anyone want to host a fellow adventure rider and filmmaker?

A little after 7pm I could tell that I was nearing the town. I could see street lights glowing in the horizon of the night sky. 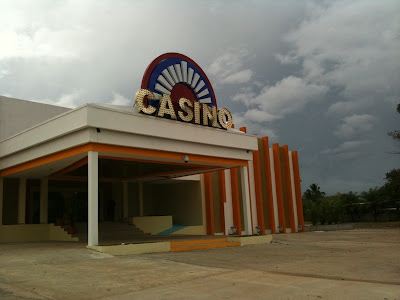 Just on the outskirts of the town I came across this casino. (Photo taken the following day) 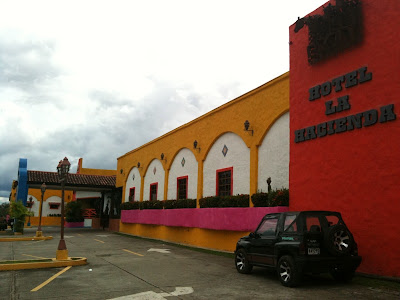 With an adjoining hotel. (Photo taken the following day)

I pulled over to check it out.

The rooms for a night were $70. A bit more than the inexpensive hostels that I'd been staying at that typically run $7 to $10. But I did promise myself that I'd treat myself to a nice hotel in each country that I visited. OK, I had just stayed at a reasonably luxurious hotel the night before, but after riding through the rain I needed a little comfort.

And... If I was lucky I might be able to make a little money at the casino.

I checked into the hotel. 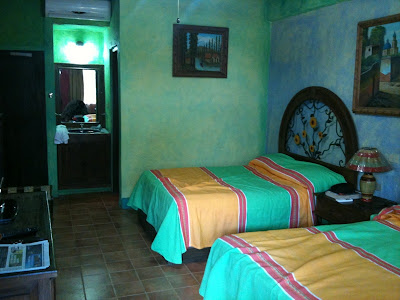 The room was nicely appointed. It had kind of a Southwestern American decor theme going on. 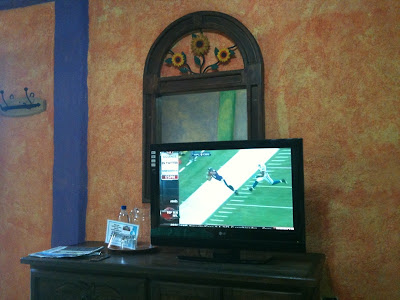 It had a wide screen tv, cable and ESPN. All the comforts I needed.
And check out this video of the toilet. Cool yeah?

I thought that it was worth the full price of the hotel just to put it to use.

After unpacking, hanging my clothes to dry out and resting a bit... I decided to try my luck at the casino.

It was a small casino with all of the games in one room. There were mostly electronic slot and poker machines, a roulette table and few blackjack tables.

I played blackjack for a while. The minimum bet was only $2, so I thought that I could play a while without loosing a great amount of money.

All in all not a bad evening. I found a comfortable hotel, I tested out a cool toilet and I ended up winning a few chips.
By Troy - December 24, 2011