I did a little dual sport riding the other day. 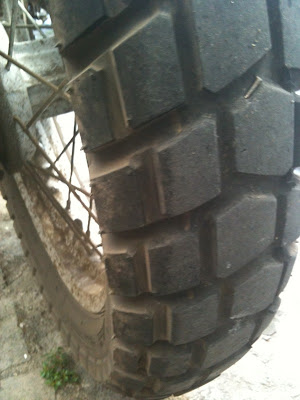 When I returned to the hotel I noticed this... a nail in my rear tire. You'll notice that the tire is still fully inflated. I didn't know if the nail had not penetrated all the way to the tube or if the Slime that I put inside my tube had protected and sealed the leak. It was late in the day, so I decided to wait until the next day to attempt the repair.

The next day the tire was still holding pressure. I've repaired a flat tire on my motorcycle before, so I felt comfortable repairing it. But I wanted to see if there was a llanta taller (tire shop) nearby that might be able to help. I asked the owner of the hotel and he indicated that there was not a taller in Alegria, but there were a few tallers in the town of Berlin about 5 km away. I headed down the road.

When I arrived in Berlin the first shop that I found was closed. I rode around a little bit looking for another. I saw a young guy on a little Suzuki 50cc motorbike. It was what one might call a pit bike in the states. I asked him where I might find a taller. He gave me directions... una cuadra alla y dos cuadra alla, alli por el banco. I told him that I was not familiar with the town. He said that he'd show me they way.

He push started his bike and we were off. We got a few looks as we roads through town because my bike dwarfed his... a rider in full moto gear on a Suzuki DR650 following a kid on a Suzuki 50cc wearing shorts. We arrived at the shop in just a few minutes.

Issrak was the jefe (boss) of the shop but he had a bunch of kids hanging around, learning the trade and working. Issrak was a big strong guy... the type of guy I like working on my bike. 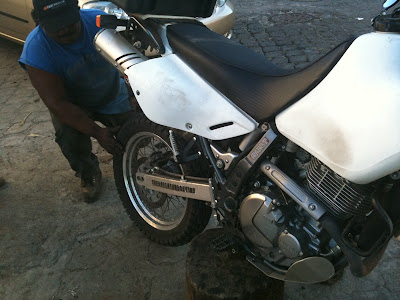 First he removed the rim and tire from the bike. He propped up the bike on an old tree stump. 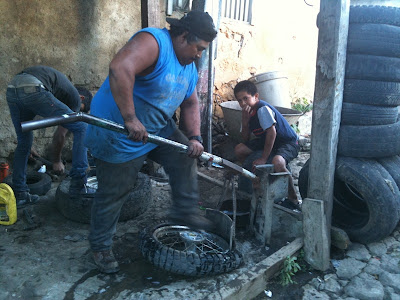 Then he removed the tire from the rim. Notice his little apprentice attentively watching. 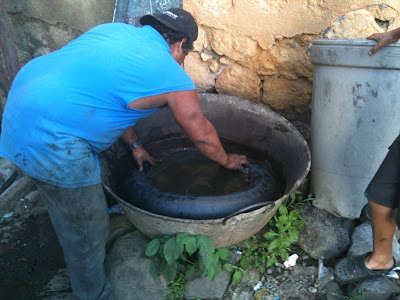 Then he removed the tube from the rim and checked it for leaks in a tub of soapy water. Good news... no leak. 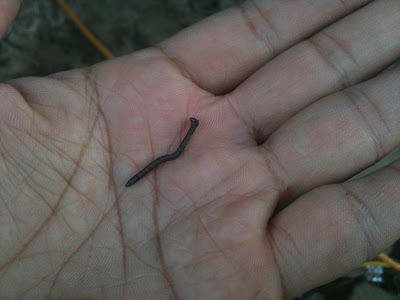 This was the culprit. Issrak removed the nail from the tire. Apparently the nail just went in sideways and penetrated a knobby. 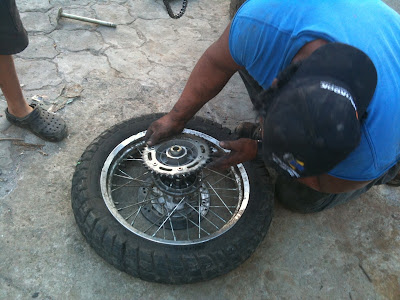 He then reset the tube, tire, rim and sprocket. 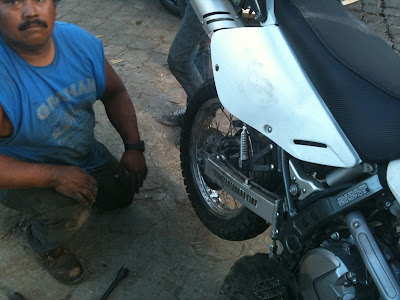 Then he put the tire back on the bike. The whole process from the time that I rode up to the shop to the time that I rode away probably only took 15 minutes. Great service. When I asked him how much he would charge me he said US$2. I was shocked. I just shook my head and gave him US$5.

In the states to repair a tire would probably have cost $50 and I would have had to leave it in the shop for half a day. This little trip to Issrak's shop saved me quite a bit of time and worry. It probably would have taken me a hour and few few bruised knuckles to change the tire myself. T

I'm simply amazed at the quality, speed of work and honesty of the mechanics and fabricators that I've come across in Latin America. Buena Gente (Good Folks).
By Troy - November 29, 2011