I heard that Playa Espino was one of the best beaches in El Salvador. When I told Roberto from the Hotel Entre Piedras in Alegria that I was thinking of going there, he looked a little puzzled and genuinely concerned. He said that the beach is nice, but the hotels are not of the same quality. A polite way of saying that they would suck. And he mentioned that the people there may not be very helpful. A polite way of saying that it might be a little unsafe.

Upon arriving in Puerto Triumpho I took a quick ride around the town. It pretty much lived up to my expectations. It felt like people were checking me out... and not in a good way. I decided that I'd seen enough and that I'd take my chances in Playa Espino.

It was about 10 km back along the coastal highway, then about 25 km over some hills and to the beach.

When I arrived in Playa Espino I couldn't easily recognize the beachfront area. 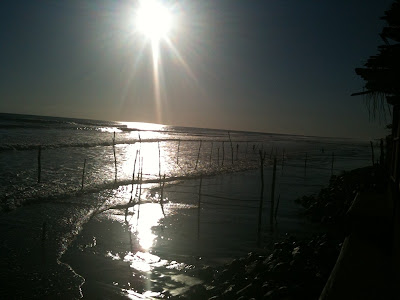 I eventually found it.

I rode around the town a bit, down some dirt roads, up some sandy paths. I found a restaurant at which to eat and to take a break. I asked the waiter where I might be able to find a hotel. He pointed me in the right direction.

All the hotels were along one street so I decided to ride down the street and inquired at each hotel what amenities it contained and what was room charge. Most of the the hotels were pretty basic... bed, fan, bathroom attached or unattached and ranged from $10 to $25. One room was offer to me for $15, but it didn't contain a bed. None of the hotels really appealed to me and many appeared unsafe. 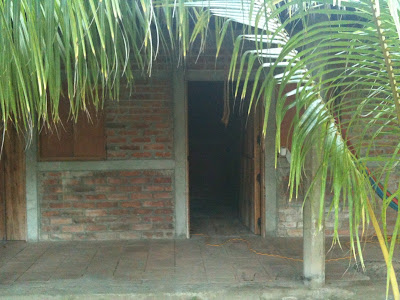 I eventually came a cross a pretty basic hotel room with a bed, sheets, fan and external shared bathrooms for US$10. It was getting late so I needed to make a choice. Of all the places that I looked at it this place appeared to be the most secure. However, I didn't know if the gate with with lock and cable was to keep people out or keep people in. 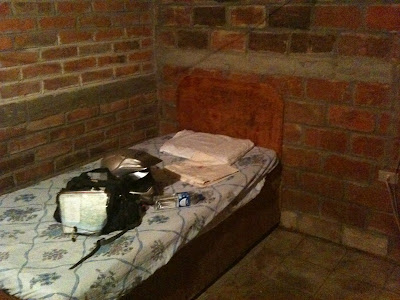 Here's the room... a bed, sheets, one electrical socket for the one light and solid brick walls. Nothing else. The bathroom was an external shared bathroom. I just figured that I'd do without a bath for a day.

I've stayed in some pretty sketchy hotels before. But when required I can adjust to just about any situation. 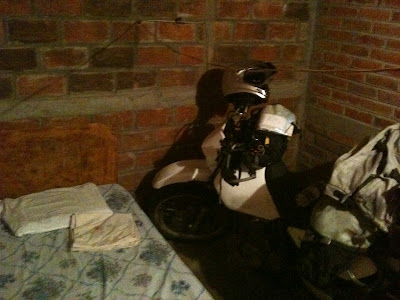 First, I moved Emi and my bags inside the room. No worries about theft. 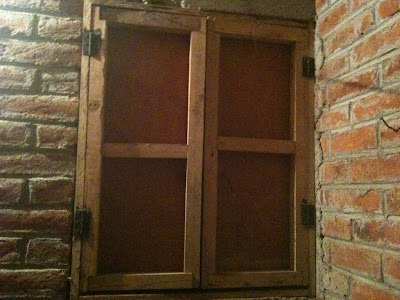 Second, I sealed off all the windows and locked them. This would limit the ventilation, but hopefully reduce the amount of insects that would enter the room. Also, reducing the risk of theft. 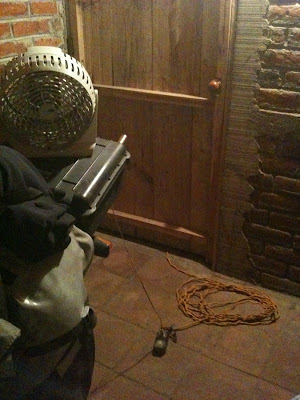 Third I asked the owner to bring in a fan. Partly to create some ventilation, but also to ward off the mosquitos.

Fourth I put on insect repellent on my exposed skin and even my clothing. Hopefully reducing my chances of becoming dinner for the mosquitos. 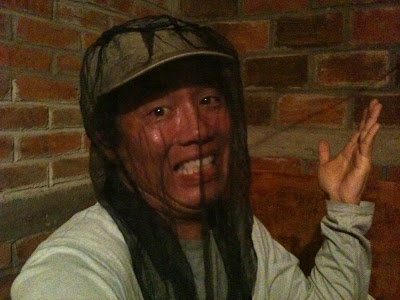 Fifth, I decided that I'd wear my mosquito net hat to sleep. Heck, I decided to wear all my cloths to sleep to ward off bugs. 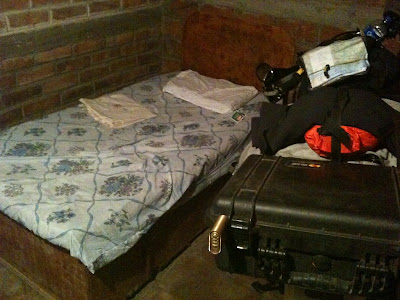 So I hunkered down for the night and expected that it would be a hot night with some bugs buzzing around my head and possibly other surprises.

In other words, I wasn't planning on getting much rest. I kept telling myself that it was only for one night. And, to get me through the night I kept thinking about the great time and hotel I had just the day before in Alegria.