I got up early to start my journey. I had packed my things the night before so it was relatively easy loading my bike. Plus, the fact that I had lightened my load by 18 lbs made my task even easier. I stopped at a gasolinera on the edge of town to fill my tank. And then I headed south. 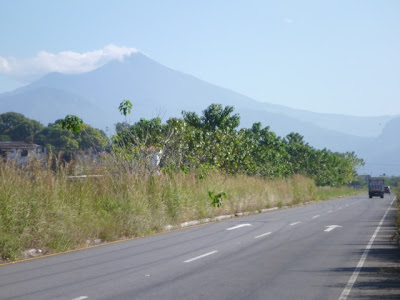 The road out of Antigua offered some nice views of the surrounding farmland and volcanos. My lightened load definitely made the ride more enjoyable. I don't know if it was loosing the weight physically or mentally that made me feel lighter and more free. 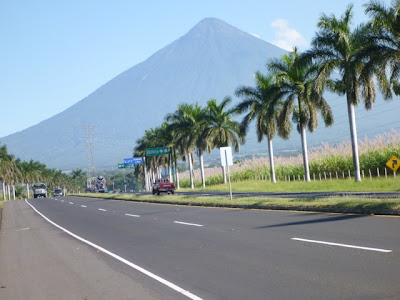 I took the bypass road around Esquintla that was smooth and fast and lined with palm trees. 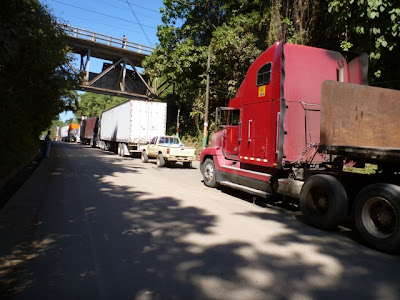 Around the town of Chichimulilla a bridge was washed out and the traffic was backed up for perhaps a quarter of a mile. It's amazing how a closed road can create a micro economy. When a road is closed and a line of waiting cars develop, the locals around the area set up roadside stands and sell all kinds of items to the road crews and the waiting motorists. I think it's pretty cool...problems creating opportunities. 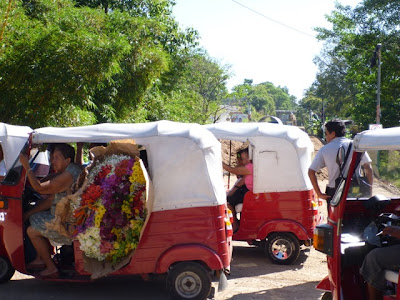 I followed a tuk tuk to the front of the line. However it appeared that the tuk tuks were backing up as well. 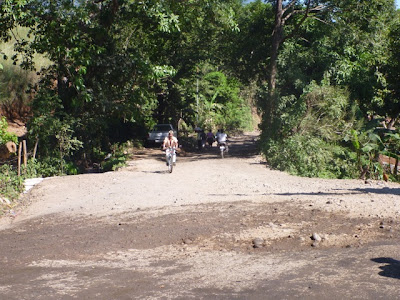 There was an alternative route over a dirt and rock road. The ground was wet which made riding it a little tricky, but it was passable. After making my way around to the other side there was no other traffic. I rode on. 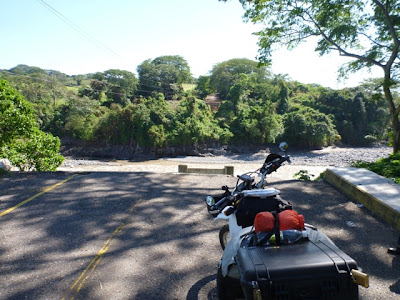 I came across this bridge. There was a section about 100 feet long that had collapsed into the water. Looking over the edge of the collapsed section I estimate the the drop was about 50 feet. OK, I guess there are some routes that even Emi and I cannot pass. I asked a man sitting along the road how to get across. He indicated that there was an alternate route about 1 km back. I backtracked a bit and found the route. 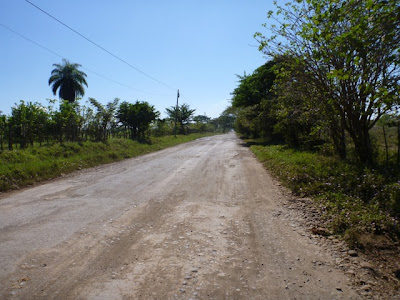 It was a dirt and gravel road that was in pretty good condition. I stopped at one of the roadside stands and bought three bananas for one quetzal for breakfast. And then rode on. 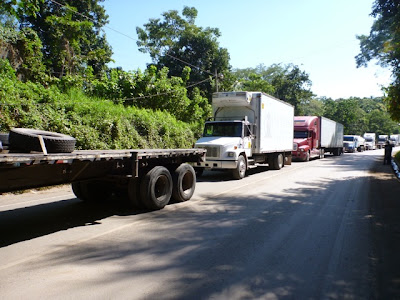 As I neared the border there was a line of large trucks waiting to cross the border. I rode pass them all to the front. Not that I'm a line cutter, but it is a pretty common and accepted practice that motorcyclist pass the auto traffic and move to the front of a line.

As I neared the Guatemalan border office a number of handlers approached me offering their services to help me work through the paperwork process. I politely declined their offers. Some of them were pretty insistent, but I felt comfortable figuring it out myself.

I waited in a short line at the passport control office. When it was my turn the agent checked my passport, stamped it and instructed me to pass by aduanas (customs) to check out my bike.

There was another line at aduanas. There was a stack of papers that indicated that there were about 30 people ahead of me. In preparation for the border crossing I had made photocopies of my passport, drivers license, moto title and Guatemalan permiso (license) the day before. I put my papers at the bottom of the stack and sat back to relax. I started chatting with the other folks waiting in line. Most of them were truck drivers. They all seemed to know each other and were joking around. It's the way of life here. If you have to wait for something, just make it social. I joined in on the conversation. After waiting maybe 10 minutes, the truck driver that seemed to be the leader of the group grabbed my papers from the bottom of the stack and moved them to the top. He said that they would let me go next. Nice!

The agent picked up my papers, checked a few numbers and gave me an exit stamp. It total it was probably only 15 to 20 minutes. I went to a nearby vendor stand and bought a few peeled oranges and gave them to the truck drivers to share for letting cut the line. I really appreciated their help, it probably saved me 2 to 3 hours of waiting.

I moved on to the El Salvador side of the border. There was a border agent standing by the road. He checked my passport and instructed me to pass by the office. At the office there was a small formality of writing down my info. Guatemala, El Salvador, Honduras and Nicaragua have a C4 agreement that allows free visa movement between the countries. I then moved to the El Salvadoran aduanas to register my bike. The agent was pretty helpful. I did need one photocopy of my canceled Guatemalan permiso to receive an El Salvadoran permiso. The photocopy tienda inside the office was closed for lunch. I didn't feel like waiting, so I went outside and down the street a little to make a copy. I returned to aduanas and the agent seemed genuinely surprised that I was able to get a photocopy so soon. He processed my paperwork and I was on my way. There was one last check as I crossed over the border. It seems that the municipal town of La Hachadura charges $5 to pass through their town. Fair enough, I paid the fee and was on my way.