I was planning to travel from Havana to the east side if the country to Santiago de Cuba, then to the far east coastal town called Baracoa.

When I travel I often enjoy taking various forms of transport. In Cuba there is a train which travels across the country, but has a reputation for being delayed, canceled, slow, irregular and unreliable. The locals that I met advised me that I should not take the train. They recommended that I fly or take the bus. To me, the train sounded like the perfect way to start an adventure. 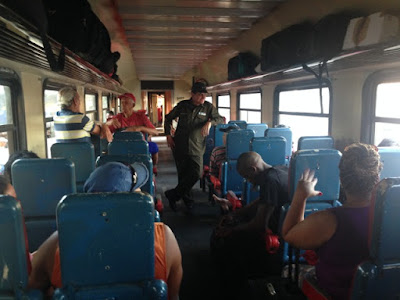 Well the train did live up to its reputation and it was delayed about 2 hours. 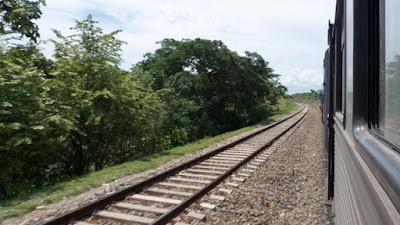 Once I got on board I settled in for a long ride. 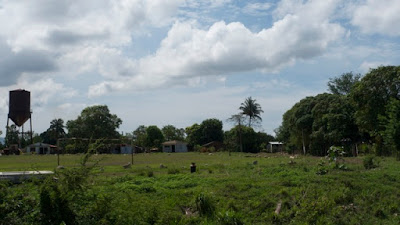 The train ride itself was rough and shaky, but it was a nice way to allow the scenery roll by and gently ease into the countryside. 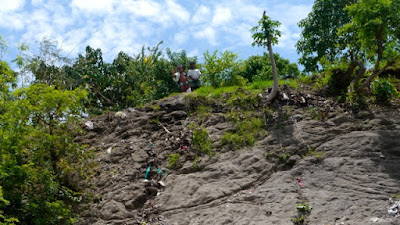 As we passed by small villages the kids on the hillsides would wave at us passengers. 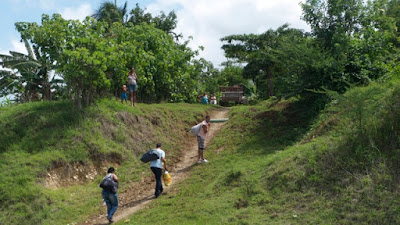 We would occasionally make brief stops at some of the small villages and a handful of people would deboard the train. Friends might help them unload their baggage or goods. Wives and children greeted their family members. 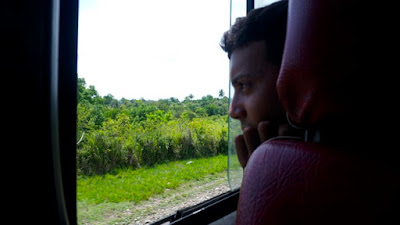 I met this young soldier that was traveling east back to his hometown. He was interested in what I thought of Cuba. I mentioned that I had just arrived and really had not formulated any opinions. He seemed just as engaged in watching the countryside roll by as me. 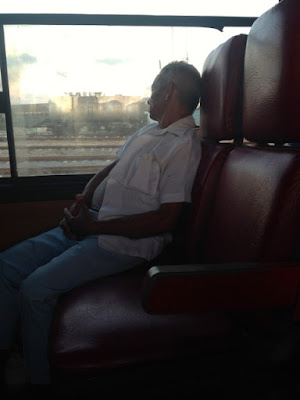 This old man seemed to be looking back in time. 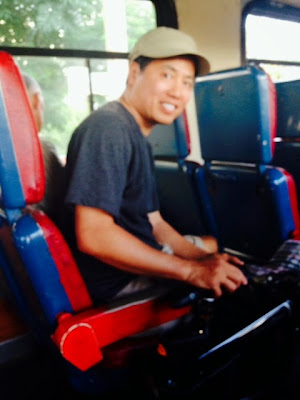 I was looking forward.

I think that we arrived 4 hours later than we were scheduled, not bad.

The rest of the way to the east coast I would need to take a bus. 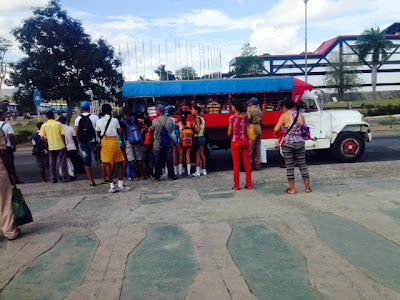 There are different types of buses in Cuba. There are the local buses (seen above) that are called gua gua. 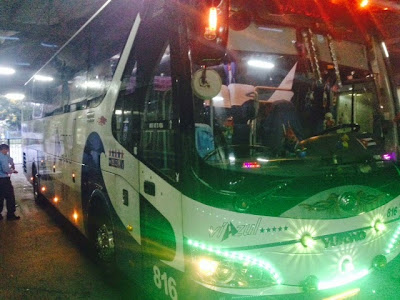 And then there are the luxury tourist buses call Viazul. Since I had just traveled rough for 16 hours via train, I thought that I'd treat myself to one the luxury Viazul buses. I bought a ticket for a bus that would leave later that same evening.

I arrived in Santiago de Cuba a little past noon and the bus would not leave until after midnight. It was an overnight bus. So I had some time to burn. I checked my bags into to Viazul baggage hold area and went exploring. 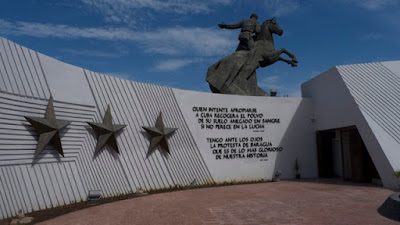 The first thing I noticed was this huge statue. There was a lady sitting near the top of the statue and I approached her and asked her about the statue. She said that area is known as the Plaza de la Revolution and the statue was of Antonio Meceo. She said that there was a museum underneath the statue. I wound my way around the building and found the entrance. I inquired about the entrance fee and was told by the staff that unfortunately the electricity was not working so I could not enter the museum. A sign of things to come. 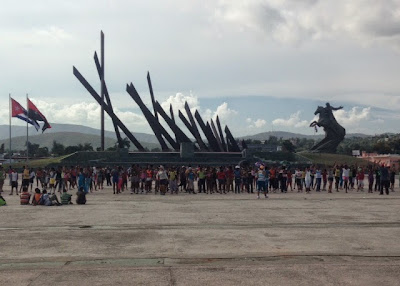 Oh well, I decide to just walk around. Out on the plaza there was a huge group of people gathered and practicing choreographed dance moves. I walked in front of the group and snapped a photo. 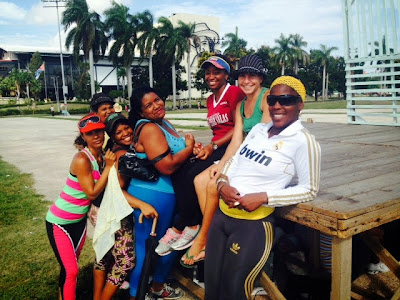 Soon, I heard the familiar call... Chino…. Chino…. Chino. It happens to me everywhere in Latin America. A group of women were gathered by a stage and waived me over. I struck up a conversation. They shared that they were practicing for a huge dance competition that would occur on Saturday as part of the city celebration. They asked me to come and watch them. I told them that I was only passing through on my way to Baracoa. They saw me snap a photo of one of the groups that was practicing and asked me to take a photo of them. They rounded up there group. People seemed to appear out of nowhere. 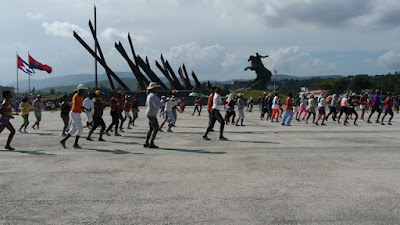 There were probably 100 plus people. They started dancing and I took some photos and video. 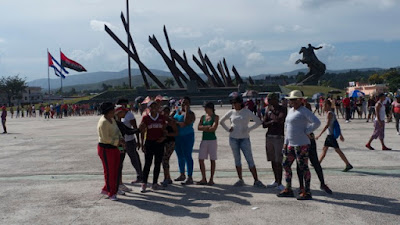 Then, all of the sudden, this one guy approaches me and says, "no photos". I was getting tired of watching the group anyways so I took this as my opportunity to leave. 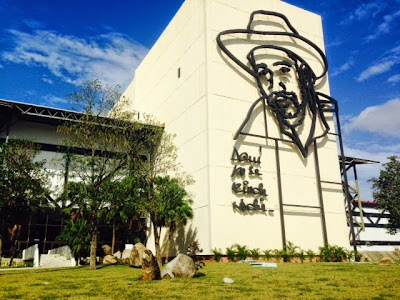 Next to the park I saw a rather large building with a giant face on the side. I walked toward the building and found out that it was the Teatro Heredia. I inquired if there were any shows in the evening, but the guard said that there were not any events going on during the week, only during the weekend. However, there was a gallery exhibit inside the theater that I was able to view that was dedicated to revolution inspiring poet Jose Marti. 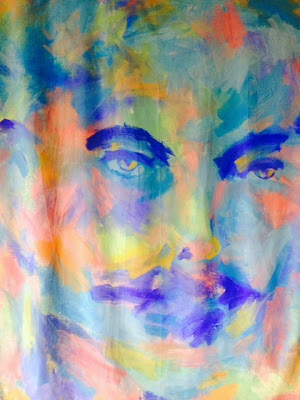 I left the theatre and continued with my exploration. I walked through an in closed area that looked like it was being prepared for a food festival. At one end of the grounds I saw the familiar lights and stands of a baseball stadium. 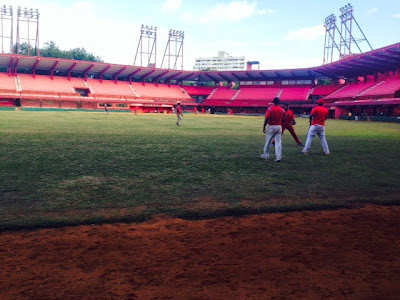 As I walked toward the stadium I saw a few players walking in a side door. I followed them. There was a full scale practice going on. Just as I was about to walk on the field. A voice from behind me called out. I turned and an elder gentleman waived me to come over. I greeted him with a smile. He asked me what I wanted. I told him that I was a big fan of baseball and just wanted to watch a little of the practice. He warmed up. We began talking and he shared with me that this was a practice for the Seleccion Juvenile (National Youth Selection) team. In the USA we do not have a Youth Selection, but the closest thing would be Olympic Team or Major League Baseball try outs.

I hung around for a while and watched the guys practice. They were pretty good. It's pretty common knowledge that baseball is the national sport of Cuba. And if players were permitted to freely travel or leave the country, I'm guessing that a number of players on the Cuba Youth Selection team would probably be drafted into the MLB. They are that good. 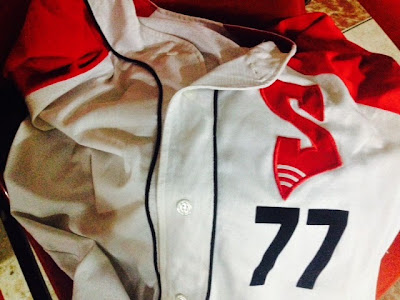 As in stood there a little longer one of the players approached me and inquired if I wanted a playera (t-shirt). I said, "sure". I saw him run over to one of the coaches and chat a little, then he disappeared off the field. A few minutes later he reappeared with something clutched in his glove. He pulled the item out of the bag and it was, not just a t-shirt, it was brand new jersey. I was a little shocked. 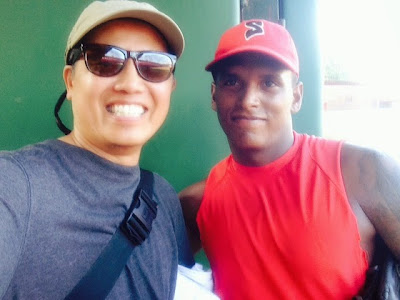 I took the jersey and took this selfie with my new friend number 77 Roberto Castellano. 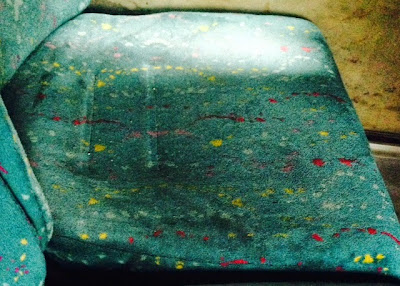 It was getting dark so I returned to the bus station. I found a "caja" box of food from a street vendor and ate my dinner. I watched a little tv in the waiting room of the bus terminal, then boarded the bus around midnight. To my disappointment the Viazul was not so luxurious. The first seat that I sat in was wet, so I moved a few rows back. The second seat as wet too. In the middle of the night, in the obscure darkness of the the cabin of the bus I could not be bothered. I was traveling with a plastic bag, placed it under my butt and settled in for the overnight journey.