In Santiago I picked up some parts for Emi... extra spark plugs, chain and some lube. I still was unable to find new sprockets. I checked three Suzuki dealers, but none of them had the parts in stock. I'm thinking that I may order them online and have them delivered somewhere along my route.

I was hoping to make it to Tierra Del Fuego before the winter sets in. It is usually okay in March, but the weather starts to change in April, so I hear. Cold and rain... I can tolerate it... snow and ice... I think not.

There had been some road blockades and gas shortages in the southern part of Chile due to some protests. I wasn't sure if I would be able to travel through the Lake District where the problems were taking place... but I sort of had a plan. 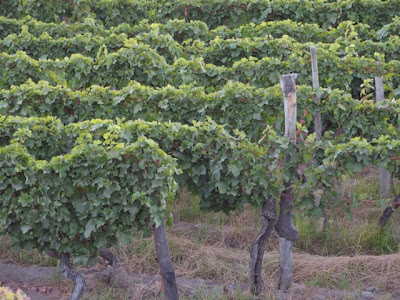 Unfortunately, I got a late start. I headed south through part of the Chilean wine country. As I rode along the highway through the vinyards I could smell the grapes. Intoxicating. I really wanted to stop and visit some of the vineyards, but I needed to make some distance. I'll have to come back when I have more time. 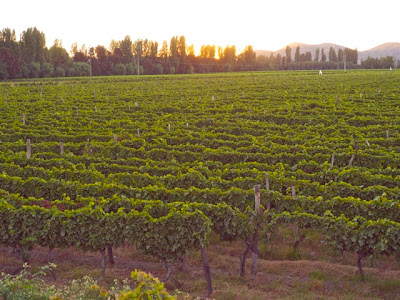 I rode until the sun began to set. Then I pulled into a town called Linares. Nothing of great interest around... so I asked a police officer where I might be able to stay the night... I was hoping to camp. 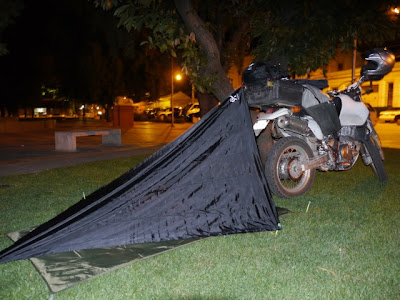 He said that it would be okay to camp in the park in front of their office. Sounded good and safe. It was late, so I didn't put up a fight... I just put up my makeshift tent...a ground cover and an lean-to cover hooked to the back of Emi... and laid down for the night. 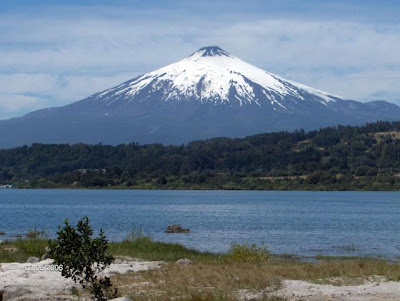 I got up early the next morning and rode to the town of Pucon. Pucon is known as a adventure tourist town that is overshadowed by a volcano and surrounded by hot springs. Many people climb the volcano, mountain bike the hills and paddle the rivers. In the winter there is skiing. I didn't feel like I had time to enjoy it all. I was being called south. However, in the evening, I was able to visit the hot springs. 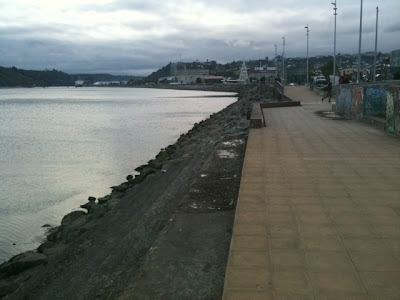 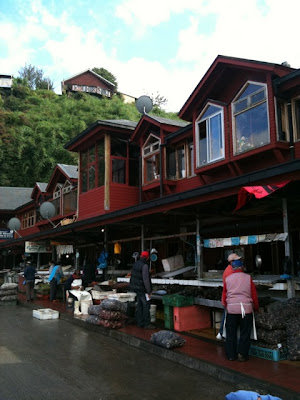 Puerto Montt is a seaside town that has an active seafood market and... 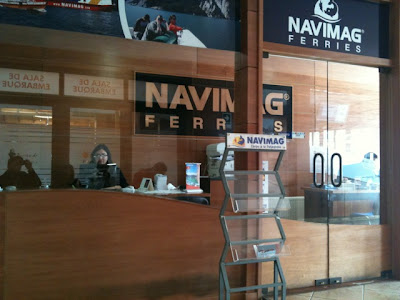 This...NAVIMAG! NAVIMAG is a ferry that travels from Puerto Montt (Central Chile) to Puerto Natales (Southern Chile). For some reason I like saying NAVIMAG... it just rolls off my tongue. 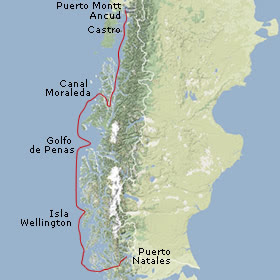 The journey takes 3 nights and 4 days and is suppose to be pretty scenic. BBC Travel and Leisure sites the NAVIMAG voyage as one of the most beautiful ferry rides in the world. I thought that I should check it out... it might actually be good, save me some time, save me some wear and tear on Emi and most importantly... get me around the gas shortage areas in the Lake District. I'm hoping that I can revisit the Lake District later... after the protests, blockades and gas shortage situation are resolved. I can't take credit for this idea... my friend Rodrigo suggested the route.