I woke up rather early at about 7am. When camping and sleeping outside my body usually adjust to the cycles of nature. I wake when the sun rises and sleep once it gets dark. It rained a little bit during the night so I needed to allow my tent to dry before I packed it up. I decided to take another visit to La Posa Azul. I hiked the quarter mile through the forrest. It was amazingly quite from man made sounds, but nature was doing it's thing. I could hear birds, frogs, insects... it was peaceful and a little disconcerting that I was the only one around. I arrived at the spring and shoot some photos and video. Of course the images will not do justice to the real thing, but you'll get the idea. I took one last swim or bath.

I returned to my camp and packed up my things. I passed through Gomez Farias and arrived at the Centro Interpretativa Ecologico (CIE). There was a group of the staff out front assembling bird feeders. Nice! 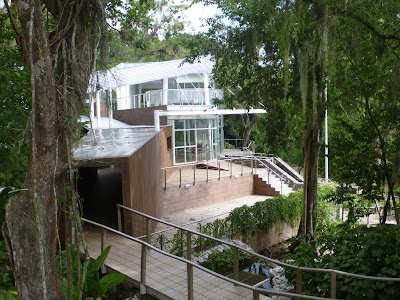 As I dismounted from Emi, a Gentleman named Jean Louis greeted me. He said that I could lock up my things, but he would also make sure that his staff would watch my bike. Emi would be alright on her own. 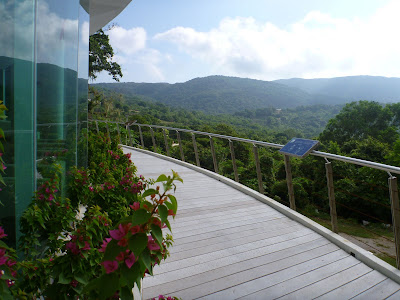 He and a guide named Oscar showed me around the center. A two on one personal tour. It was amazing. Everything at the center was designed with green building principle. They had designed in water collection, solar electricity, solar windows, recycled materials, etc, etc. The center is in the middle of the forrest so all around I could see orchids, insects, birds, butterflies and even a six foot boa constrictor. The reserve also has armadillos, jaguars, ocelots and black bears. I didn't get to see any on this visit, but perhaps next time. The biosphere has something like 500 of the 600 species birds that exist in Mexico. If you like experiencing nature this is a must see. 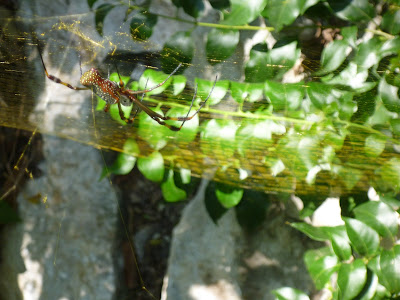 After walking around a bit a film maker named Noe Vargas showed me a film he made about El Cielo and the interconnection with Ecology. I enjoyed it and it was actually pretty well made. I could sense his passion for the subject.

After going through the center I went back up to the administrative offices to say goodbye to Jean Louis. We ended up talking a while and he shared about his life, his work and his passion for ecology. We went out for lunch and continued the conversation. 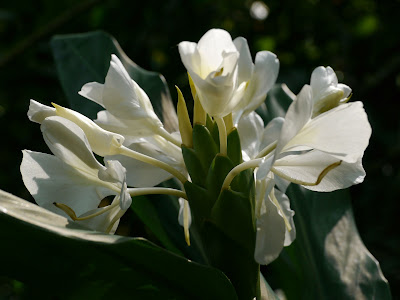 After lunch we said goodbye. As soon as you can you should visit El Cielo and the CIE. It's a great biosphere center with extremely friendly people. It is certified under the Man and Biosphere program of UNESCO. It is definitely worth the visit.

For more info check out www.elcielobiosphere.org
By Troy - September 26, 2011