While staying in Rapid City, I researched its history.

To the west and north of the Black Hills and Rapid City, dinosaurs remains have been found in great abundance in the basins of Wyoming and on the Northern Great Plains. 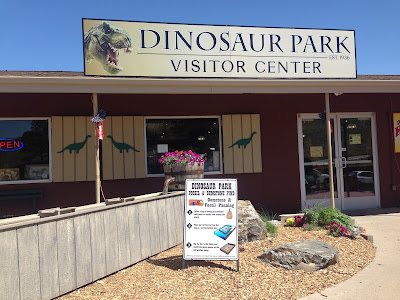 I heard that there was a Dinosaur Park in Rapid City, so I thought that I should check it out. I found the visitor center and was told that the Dinosaur Park was up the hill. So I started climbing... 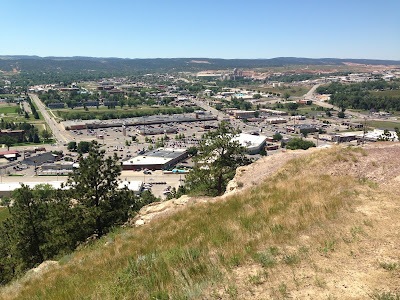 I climbed up the hill and at the top I discovered that there was a great view of of the north side of Rapid City... 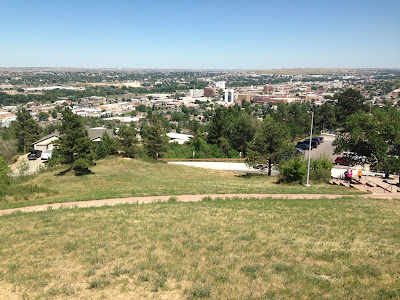 ... and the downtown area of Rapid City. 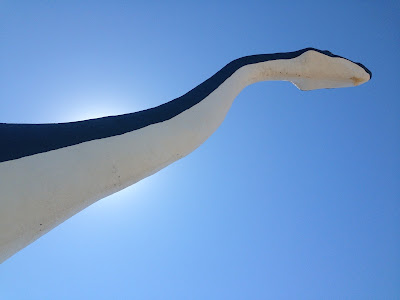 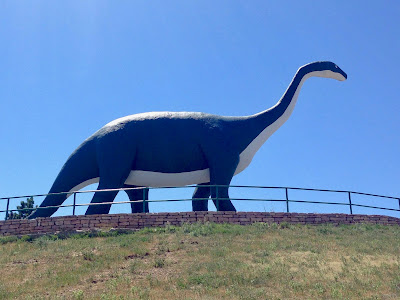 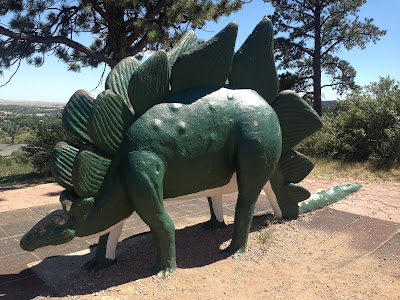 I was disappointed to find out that the Dinosaur Park did not contain any real dinosaurs, fossils or remains. 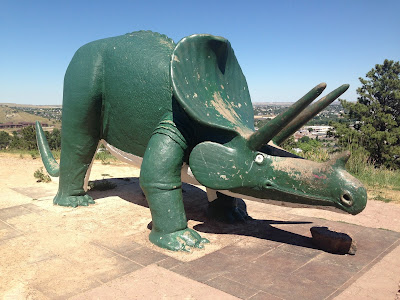 It only had these concrete reproductions of dinosaurs. 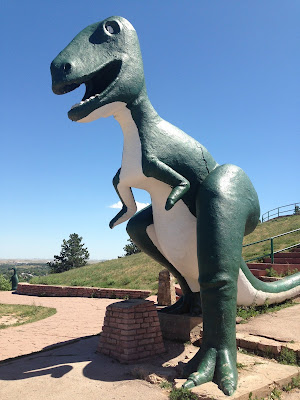 And some of them didn't even look real. I thought that it was funny that I had been drawn into this tourist trap. Well, at least it had a good view of the cityscape. 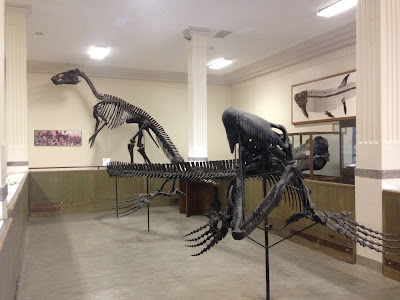 My search for dinosaurs continued after I heard that there were real dinosaur remains at the Museum of Geology. I searched for the museum with my GPS and followed the directions. I was surprised when I wound up on the campus of the South Dakota School of Mines and Technology. I eventually found the building that housed the Museum of Geology and entered. To my surprise there was a pretty decent collection of reproduced dinosaur skeletons. 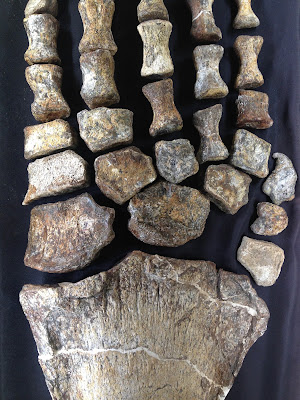 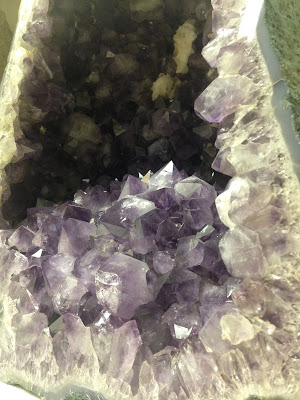 And a fairly large collection of rocks and minerals.

Sometimes you have to visit a few tourist traps before you find the real gems. 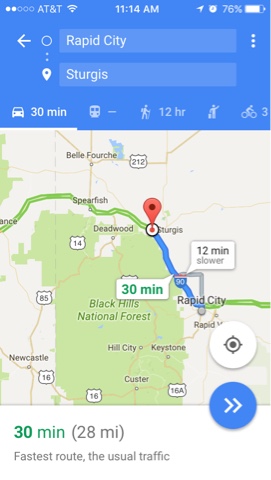 There are really two big attractions in the Black Hills area of South Dakota. The first is Mount Rushmore. I'd say that it is a very family friendly attraction. The second is the small town of Sturgis. It attracts a different demographic. 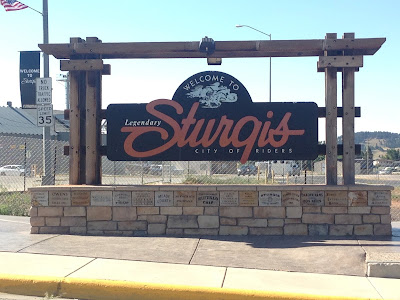 Sturgis... the City of Rides. 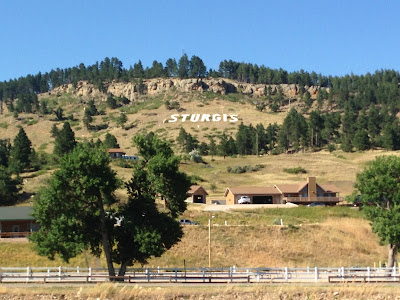 Sturgis is a small town in western part of South Dakota. The population is about 6,627. It was originally named Scooptown, because many of the residents that worked and lived in the nearby mines and Fort Meade "scooped up" their pay in the town. It's name was later changed to Sturgis in honor of the Civil War Union General Samuel D. Sturgis. 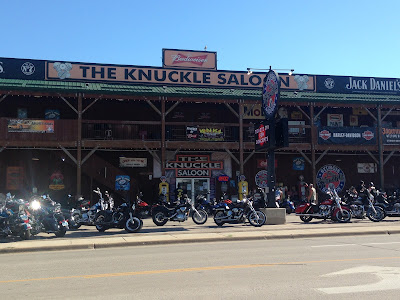 The town is notable as the location of one of the largest motorcycle events in the world called the Sturgis Motorcycle Rally. 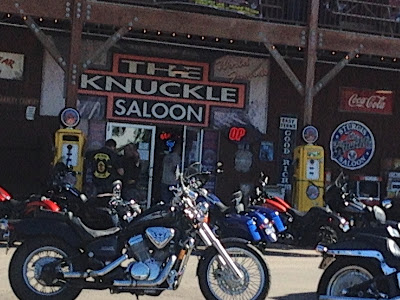 The rally is held annually and takes place for ten days usually during the first full week of August. Motorcycle enthusiasts from around the world flock to this town during the rally. 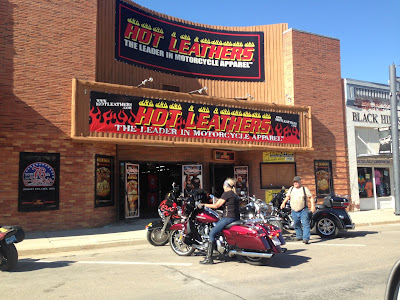 The rally began in 1938 by a group of Indian Motorcycle riders and was originally held for stunts and races. Attendance has historically been around one half million people, reaching a high of over 700,000 in 2015, and generating around $800 million in revenue. 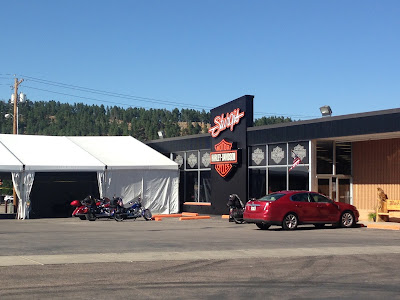 I was passing through the town about two weeks prior to the rally. The huge crowds of Indian and Harley Davidson motorcycle riders had not yet arrived, but the venues were prepping for their arrival.

I ride a motorcycle, but I've never ridden an Indian or Harley cruiser style motorcycle. Still, it would have been cool to see some of the crowds and activities of the rally. 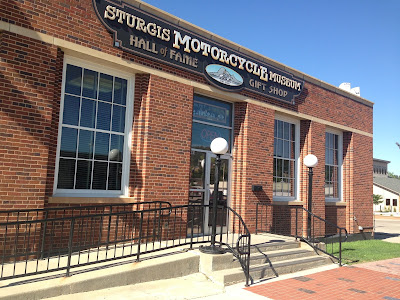 I stopped by the Sturgis Motorcycle Museum and Hall of Fame, but I was disappointed to find out that it was closed for the day for some reason.

When the rally is not going on, the town of Sturgis seems like a nice quiet small town. I'm sure that it takes on a whole different persona during the motorcycle rally. I think that I drove around the 4 to 5 square blocks of the town in about 30 minutes. Then I continued with my journey westward. 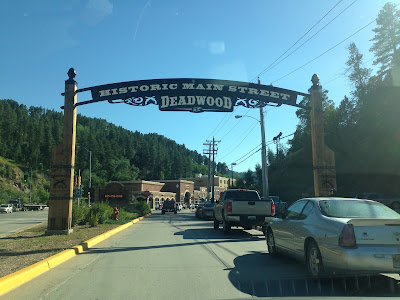 My next stop was the historic town of Deadwood. Why would anyone name a town deadwood? Supposedly, the the town was named after the dead trees found in a nearby gulch. 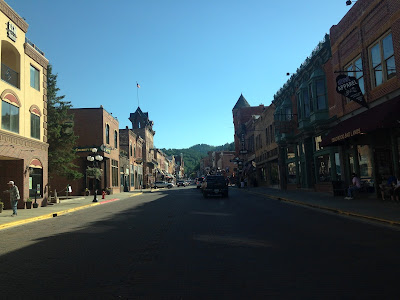 The settlement of Deadwood began illegally in the 1870s on land which had been granted to American Indians in the 1868 Treaty of Laramie. The treaty had guaranteed ownership of the Black Hills to the Lakota people and land disputes were endemic, having reached the United States Supreme Court on several occasions. However, in 1874, Colonel George Armstrong Custer led an expedition into the Black Hills and announced the discovery of gold on French Creek near present-day Custer, South Dakota. This announcement triggered the Black Hills Gold Rush and gave rise to the new and lawless town of Deadwood, which quickly reached a population of around 5,000. 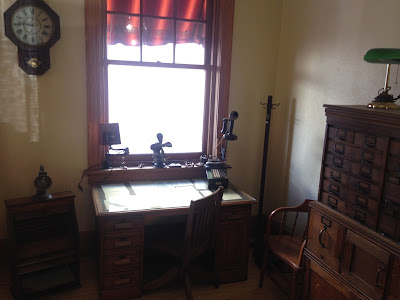 Inside the old railroad building there was a museum and tourist information office. I gathered some information about the town. 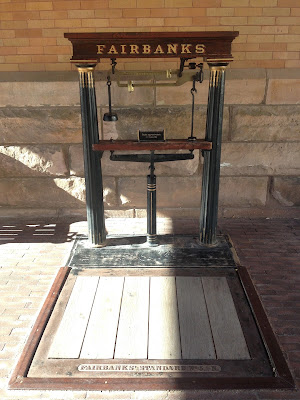 An old freight scale outside the railroad station that probably was used to measure cargo. 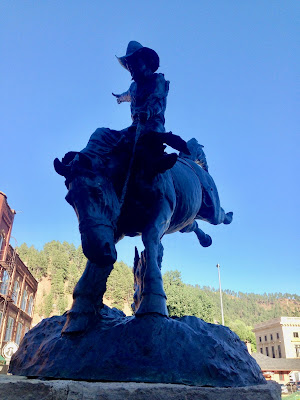 This town was founded as a frontier town by cowboys, gold miners and merchants. 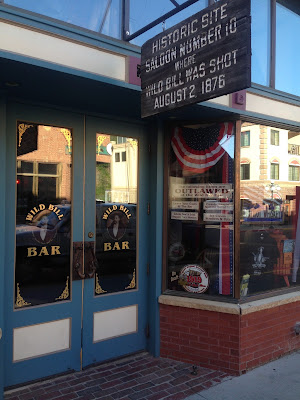 Now it seems to cater mostly to tourist trying to experience a little taste of the old west.

Wild Bill is probably the most famous Deadwood resident, even though he was only in town a few short weeks. James Butler Hickok arrived in Deadwood, along with Colorado Charlie Utter and Calamity Jane, in July of 1876. He was a well-known gambler and gunslinger, participating in many shootouts before coming to Deadwood. He was killed on August 2, 1876 when Jack McCall shot him from behind while playing poker. When he died, Wild Bill was holding a pair of aces and eights, that series of cards became known to poker players all around the world as the “Dead Man’s Hand.” 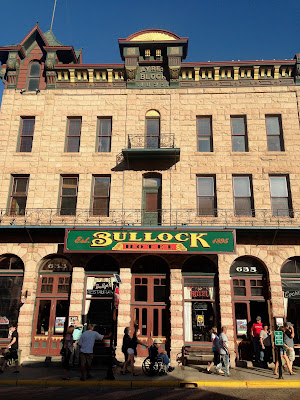 There were a number of classic hotels around the town that contained restaurants, souvenir shops and casinos. 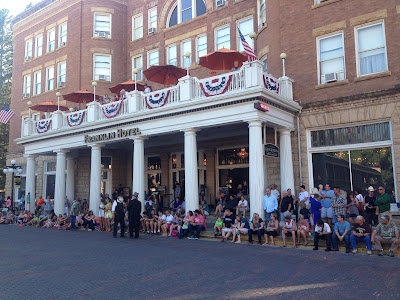 In the afternoon a crowd materialized in front of the Franklin Hotel and then a gunfight broke out. 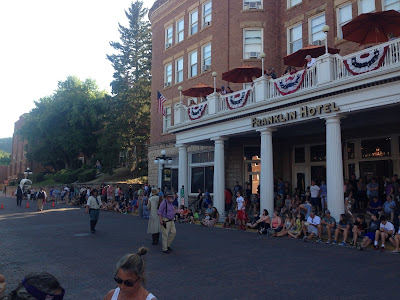 It appeared that there was a dispute over some gold mining rights. 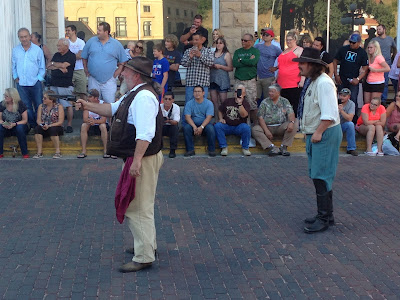 In actuality, it was all just a performance by the local theatrical group for the tourists to enjoy. The gunfight started in the streets, then moved to a saloon, then moved to the theatre. A clever technique to round up tourists and encourage them to buy a ticket to the local theatre. I did not not get roped in nor follow the gunfight to the theatre. 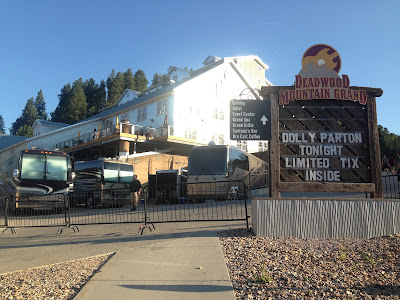 There was another big event going on in town. It just so happened that Dolly Parton was in town and performing at the Deadwood Mountain Grand Hotel. The lady at the tourist information office mentioned to me that Dolly Parton was probably one of the biggest musical stars to ever play in Deadwood next to Willie Nelson. Tickets were going for $150, so I decided to pass.

I'm not a big gambler, but I decided to try my luck since I was in the historic town of Deadwood. I jumped into one of the hotel casinos and played a few hands of blackjack. I ended up winning about $50. And fortunately,  I did not get shot in the back.