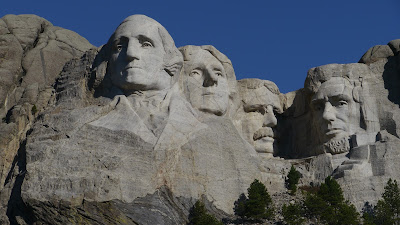 When visiting South Dakota, a visit to Mount Rushmore should be on anyone's list. 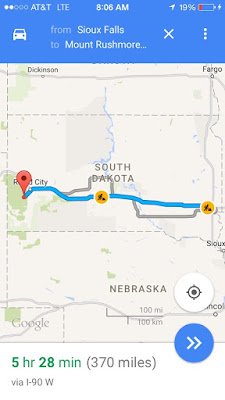 Because I spent most of the day driving the scenic route, I arrived into Rapid City late. The sun had set. The sky was dark. It was already past 7pm. I searched online for information about visiting the Mount Rushmore National Memorial and found out that there was a lighting ceremony in the evening during which they light up the side of the mountain and the monument. It was already late, I was tired, but I decided that I should try to check it out. 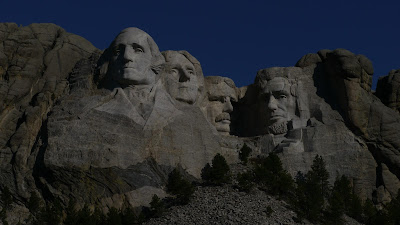 From Rapid City to Mount Rushmore I drove on a road that twisted through a forrest and up into some hills. I arrived at the park a little past 8pm. It was free to enter the national monument grounds, but there was a charge for parking of $10. The parking pass would be valid for multiple visits for up to a year. I found a parking space easily, exited the parking garage and walked into the venue. There were a large number of people leaving the grounds. I was walking against the crowd and I was a little concerned that I had missed the lighting ceremony. I reached an observation deck where there was a crowd of people standing around. I inquired what was going on. A lady that was wrangling her kid told me that everyone was just waiting for the lighting ceremony to begin. She explained that she and her family had be waiting since 5pm. I could tell by her exhausted kid that the whole family had had a long day. I was glad that I had arrived in time. I was equally glad that I had not been waiting since 5pm.

I walked around the observation deck for about 5 minutes, then the program started. There was audio projected through some loud speakers and one by one the faces of the presidents were illuminated. I could not hear the audio program clearly, so I just observed the light display and took a few photos. I had planned to revisit the park the following day during daylight hours. I exited the park grounds and returned to the winding road. I must have taken a wrong turn and ended up getting lost. I ended up driving around the backside of the mountain. After about an hour and a half I arrived back into Rapid City. A long full day. 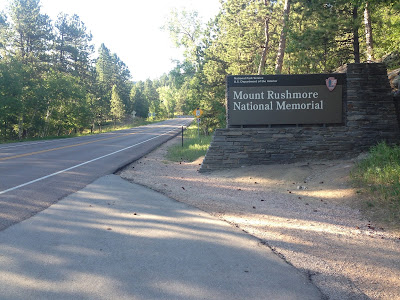 The next morning I got an early start. I picked up some breakfast then headed back toward Mount Rushmore. 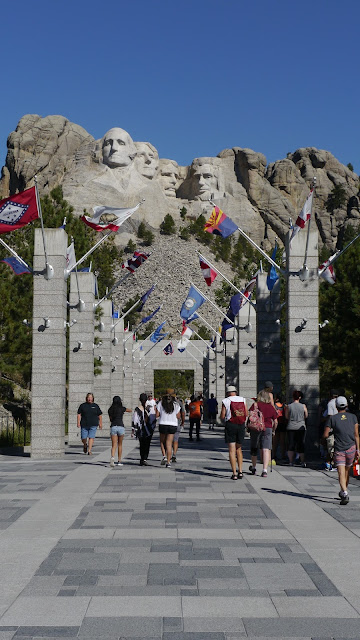 Mount Rushmore has become an iconic symbol of the United States. It attracts over two million visitors annually. It is a recognized monument all over the world, but few Americans actually have the opportunity to visit the memorial because it is located in a somewhat remote part of the US. Upon entering the Mount Rushmore National Memorial grounds I passed by two rows of columns with flags from each of the 50 states. The Mount Rushmore National Memorial is a sculpture by Gutzon Borglum carved into the granite face of a mountain . The memorial features 60-foot sculptures of the heads of four United States presidents: George Washington (1732–1799), Thomas Jefferson (1743–1826), Theodore Roosevelt (1858–1919), and Abraham Lincoln (1809–1865). 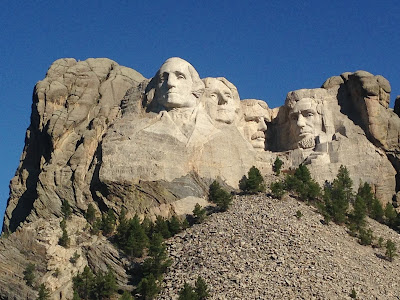 South Dakota historian Doane Robinson is credited with conceiving the idea of carving the likenesses of famous people into the Black Hills region of South Dakota in order to promote tourism in the region. Robinson originally wanted it to feature American West heroes like Lewis and Clark, Red Cloud, and Buffalo Bill Cody, but artist Gutzon Borglum decided the sculpture should have broader appeal and chose the four presidents.

Construction on the memorial began in 1927, and the presidents' faces were completed between 1934 and 1939. Upon Gutzon Borglum's death in March 1941 his son Lincoln Borglum took over construction. 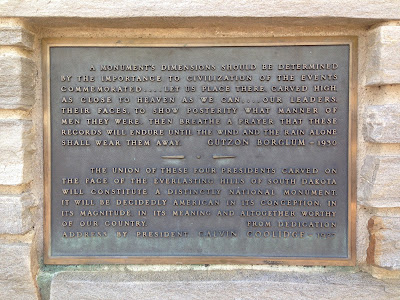 In a garden area of the memorial there was this inscription...

"A monument's dimensions should be determined by the importance to civilization of the events commemorated... Let us place there carved high as close to heaven as we can... our leaders, their faces, to show posterity what manner of men they were. Then breathe a prayer that these records will endure until the wind and the rain alone shall wear them away." - Gutzon Borglum 1930

"The union of these four presidents carved on the face of the everlasting hills of South Dakota will constitute a distinctly national monument. It will be decidedly American in its conception, in its magnitude, in its meaning and altogether worthy of our country." - President Calvin Coolidge 1927 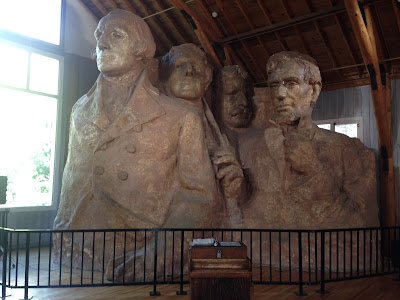 After checking out the main memorial I walked around the grounds and found the museum. The museum contained a number of displays that explained the history, construction and symbolism of the memorial. 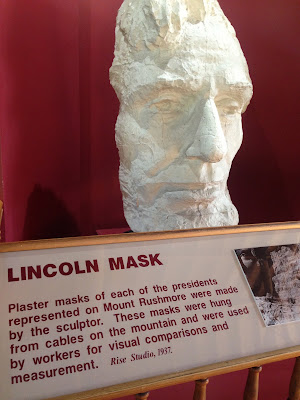 Models masks were produced prior to construction. 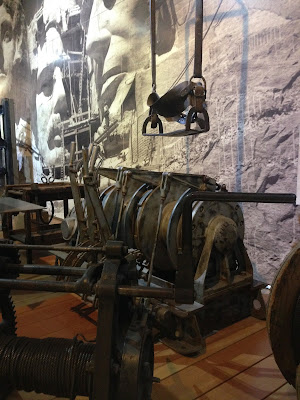 Most of the equipment and tools used were manually operated.

I realize that in our modern society, it is easy to find affiliation and direction through memes and tweets. However, I think that I prefer to derive my inspiration from quotes that have stood the test of time. 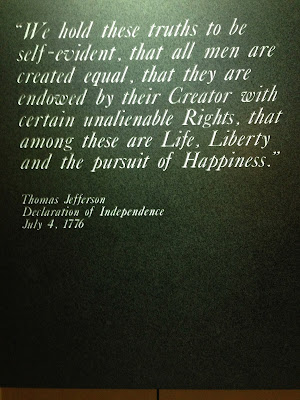 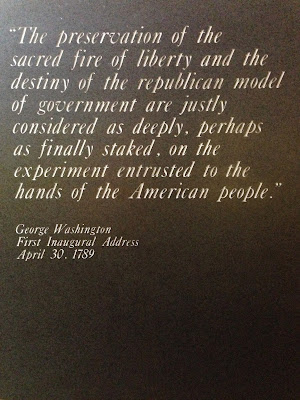 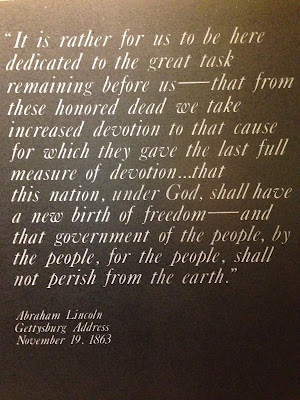 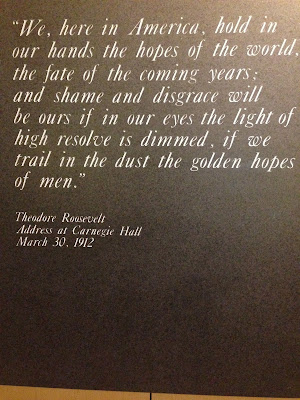 Since I was a kid, I always wanted to visit Mount Rushmore. I always imagined that it would be big. But I never imagined that it would be soooo BIG. The size and scale of the sculpture was impressive. Learning about the artist, his philosophy and his creative process was amazing. Some might say that it is a unique treasure for the USA. Others might say that it is an obtrusion on Native American land. I would leave that argument for a historian. I would say that, after the Great Depression, Mount Rushmore served as a reminder of our ideals, optimism and ability. It still stands as a record... "until the wind and the rain alone shall wear them away." 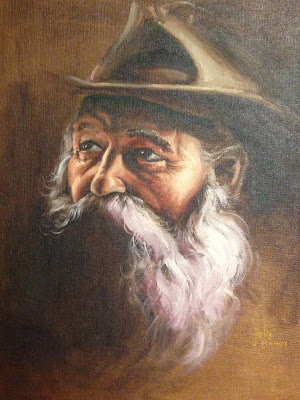 Nearby Mount Rushmore there was another notable monument created by the Lakota Tribe and sculptor Korczak Ziolkowski. 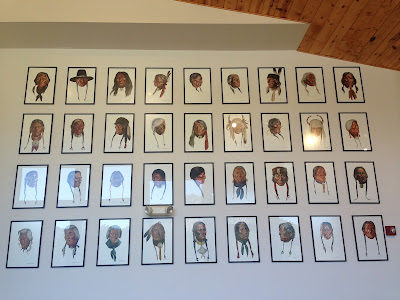 Korczak Ziolkowski won a sculpture contest and became famous after the 1939 New York World's Fair. The resulting fame, as well as his familiarity with the Black Hills, prompted several Lakota Chiefs to approach him about a monument honoring Crazy Horse.

Crazy Horse was a Native American war leader of the Oglala Lakota. He took up arms against the United States Federal government to fight against encroachments on the territories and way of life of the Lakota people

Chief Henry Standing Bear of the Lakota wrote to Korczak Ziolkowski, saying, "My fellow chiefs and I would like the white man to know the red man has great heroes, too." 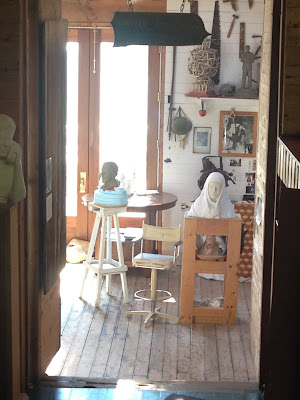 Ziolkowski met with the leaders shortly afterward and began planning a monument. 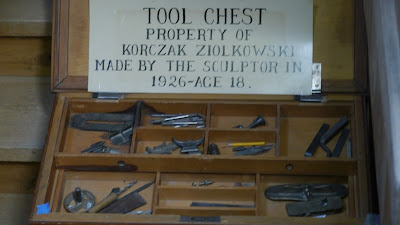 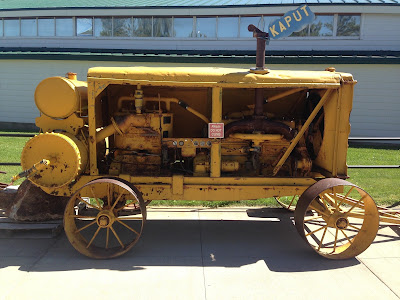 Gas generator used to power tools used during the construction of the monument. 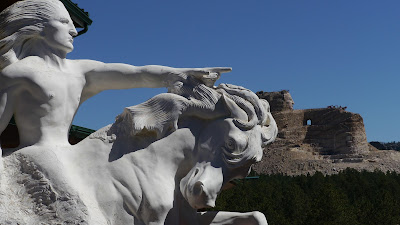 The Crazy Horse Memorial is still under construction. The finalized sculpture will depict Crazy Horse, an Oglala Lakota warrior, riding a horse and pointing into the distance. 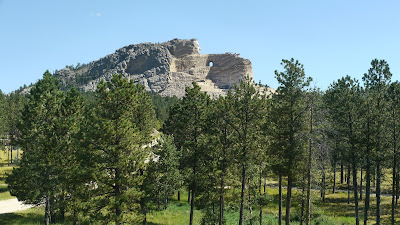 The memorial consists of the mountain carving, the Indian Museum of North America, and the Native American Cultural Center. The monument is being carved out of Thunderhead Mountain on land considered sacred by some Oglala Lakota. 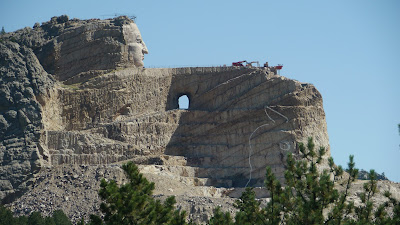 The monument has been in progress since 1948 and is far from completion. If completed, it may become the world's largest sculpture.

I did not know much about the Crazy Horse memorial until I visited it. One observation that I made was that the memorial is privately operated by the Lakota tribe and Ziolkowski family. While the monument itself was still under construction, the museum and gift shop were in full operation. I kind of got the impression that there was more effort being put into promoting the idea of and selling products about the memorial than actual work being put forward into its construction. I could be wrong, but it was just my feeling. But who can fault the creators for trying.