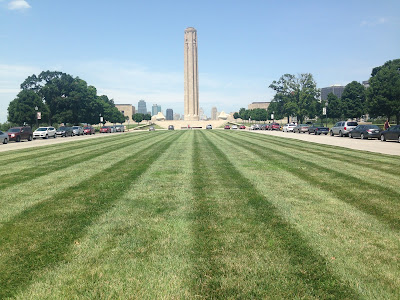 After spending a couple of days fishing on the Roaring River I continued north on the highway towards Kansas City. 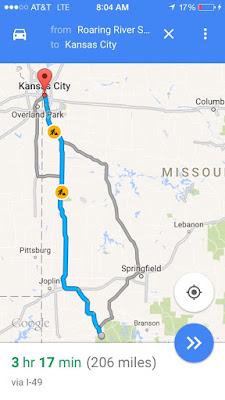 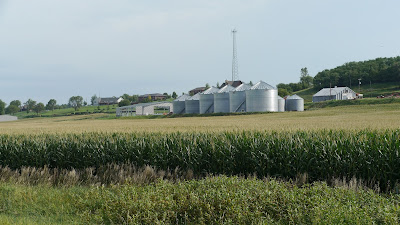 As I drove north the highway was bordered by both small and large farms. It appeared that the crop of choice in this area at this time was corn. The midwest is known for farmland and for producing an abundance of the grain that is cultivated in the US. A breadbasket of a country is a region which, because of the richness of soil and advantageous climate, produces large quantities of wheat or other grain. Thus, the midwest is often thought of as the breadbasket. 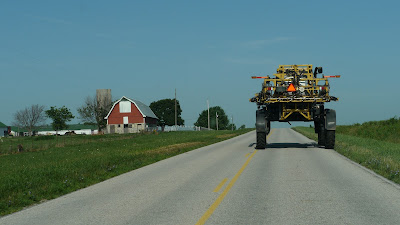 I'm not sure what this piece of farm equipment is used for, but it was huge. The wheels were at least 8 feet tall. I was very tempted to try to drive my car underneath the apparatus. My better judgement prevailed and I drove around it. 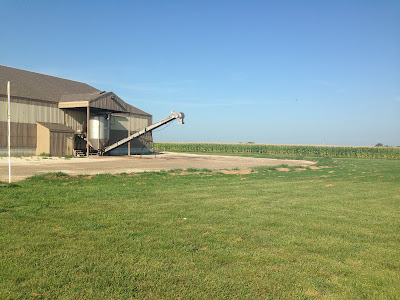 I passed by this corn field and granary. It just seemed like an icon image of the midwest. 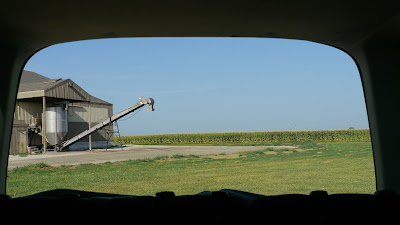 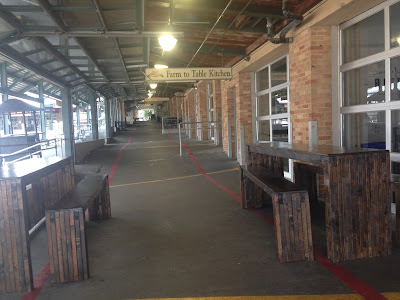 After driving a little over 3 hours I arrived into Kansas City. I was hungry so I sought out a place to eat. My GPS indicated that there were a grouping of restaurants at the Kansas City River Market. I found the market, parked my car and set out on foot. There were a number of great looking ethnic restaurants and shops at the market, but for some reason almost everything was closed or closing. I was a little bewildered and disappointed. I eventually found a small cafe and ate a sandwich... I thought that it was a very midwest thing to do. 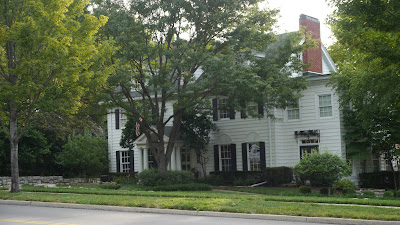 I always feel better after eating. With a full stomach, I felt like exploring a bit, so I returned to my car and drove around. I passed through some nice neighborhoods. One thing that I discovered that I never knew about Kansas City was that the city actually sits on the border between Kansas and Missouri. Half of the city resides in Kansas and half of the city resides in Missouri. 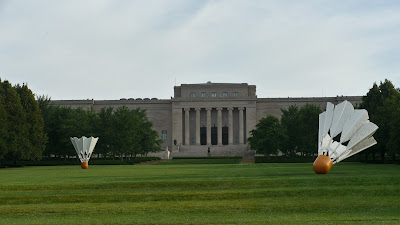 Close by the downtown area I passed by the Nelson Atkins Museum of Art. Unfortunately I checked the hours of operation and the museum was closed. There were these oversized badminton shuttlecocks scattered about the front lawn. Unexpected... odd... cool. 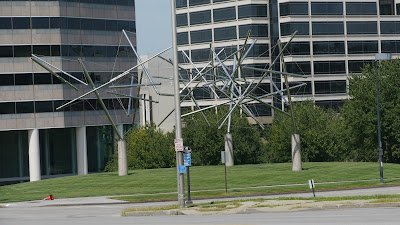 Around the museum area there were a number of modern installation art pieces.

I eventually found my way to the Liberty Monument and National World War I Memorial. 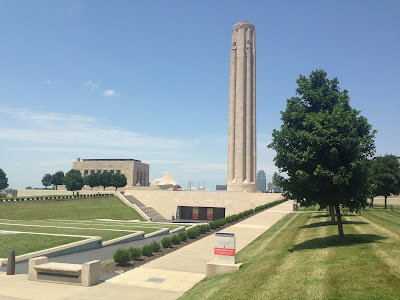 The Liberty Memorial is a memorial to service men and women who served in World War I. The memorial was designed by Harold Van Buren Magonigle in the classical Egyptian Revival style of architecture. The foundation was constructed using granite, and the exterior ground level walls are made of bedford stone and limestone. The design and construction had a certain heaviness. At night, the top of the 217-foot (66 m) tall memorial tower emits a "flame affect", steam illuminated by bright red and orange lights. This effect creates the illusion of a burning pyre and can be seen for some distance. 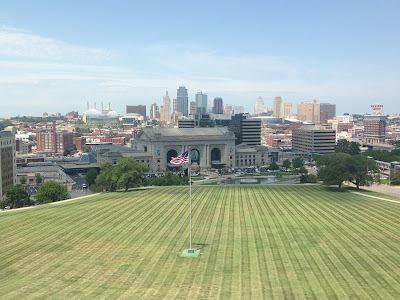 On the far side of the memorial there was a good view of the cityscape. 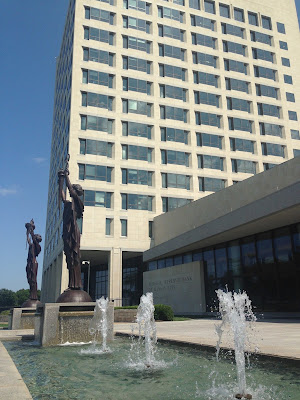 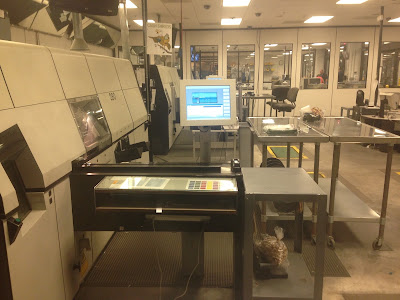 Inside the building you could see a workroom where they actually controlled the printing of money. 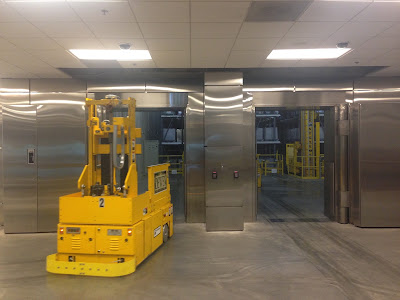 There was also a vault were the Fed stored money and gold. I tried to convince one of the robots to make a deposit of money into my car, but the dumb technology did not understand my instructions. 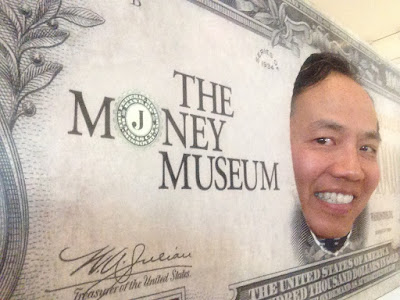 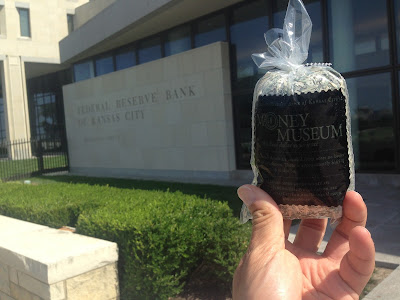 I left the Federal Reserve Bank and was given this bag of money for free. The money was shredded, but still. 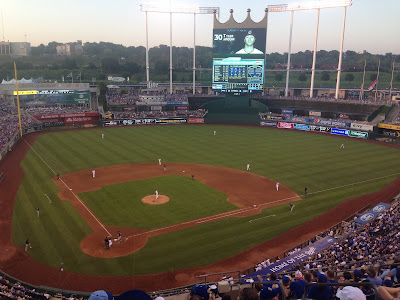 I did not really have plans for the evening, so I searched online for things to do in Kansas City. I found out that there was a Kansas City Royals baseball game happening. It was already around 6pm, but I checked online and was able to buy a ticket in the nose-bleed section for about $9. Not bad for the opportunity to watch the MLB reigning world champion team.

In the US, baseball is known as the national pastime. Previously, baseball was a sport that every kid played. Now there are so many sports and activities that kids can play that baseball is one option that is less and less often played. I played baseball growing up as a kid. I still love the game. I love the sport, the history, the strategy, the nostalgia... everything. I'm a fan of baseball and an admirer of old baseball stadiums. So... take me out to the ballpark!

I drove to Kauffman Stadium, parked my car and entered the complex. I've been fortunate enough to watch baseball games in various cities in some of the classic parks - Yankee Stadium, Shea Stadium, Dodger Stadium, Candlestick Park, Arlington Stadium and of course the Astrodome. This would be a treat.

Kauffman Stadium is an open air stadium, often called "The K". The venue was named in honor of the Royals' founding owner, Ewing Kauffman. The stadium was built specifically for baseball during an era where building multi-sport "cookie-cutter" stadiums were commonplace. It is often held up along with Dodger Stadium in Los Angeles as one of the best examples of modernist stadium design. The stadium is the sixth-oldest stadium in Major League Baseball at 44 years old.

In the eighth inning Kansas City got hot and scored seven runs. The inning was topped off with a grand slam by Jarrod Dyson for the win. The final score was Indians 3 v Royals 7. Awesome comeback. Amazing evening! 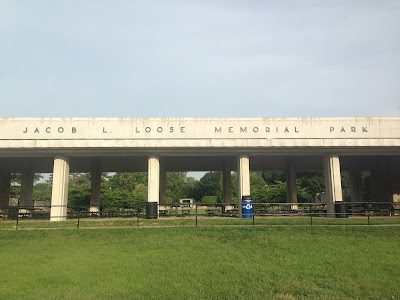 The next day I got an early start and found the Jacob Loose Memorial Park and Garden. 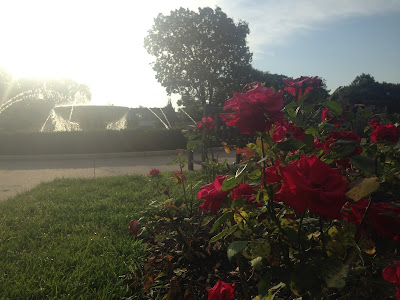 It was primarily a rose garden and had a nice water fountain. 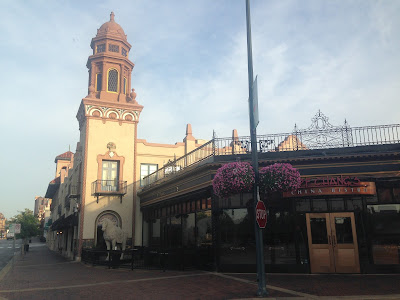 I also discovered the Country Club Plaza. It was not really a country club. Nor was it a traditional plaza. It was an outdoor shopping area. 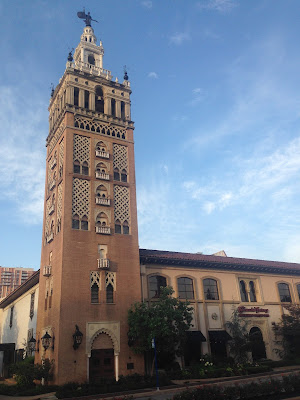 Before the turn of the 20th century, the Brush Creek Valley was little more than a watering hole for those on their way to somewhere else. Jesse Clyde (J.C.) Nichols changed the face of the land forever, transforming a swampy, unappealing tract of land into the country’s first shopping center, the Country Club Plaza. 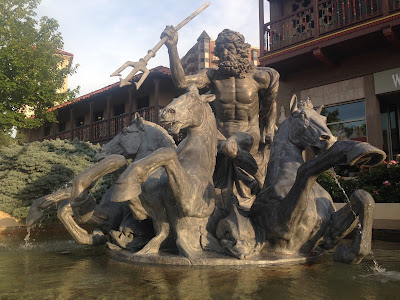 Remembering his travel experiences in Europe and the Southwest, Nichols chose a Spanish theme for the Plaza that included courtyards and stucco buildings with red tile roofs and ornate towers. 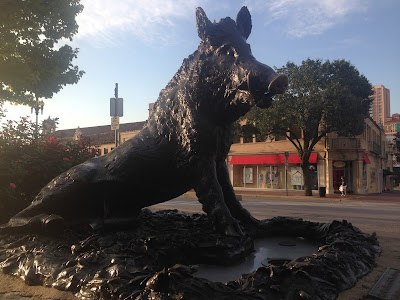 He hand-picked works of art to adorn the Plaza’s streets and sidewalks; antique sculptures, columns, tile-adorned murals, wrought iron and fountains were all meticulously placed by J.C. himself. 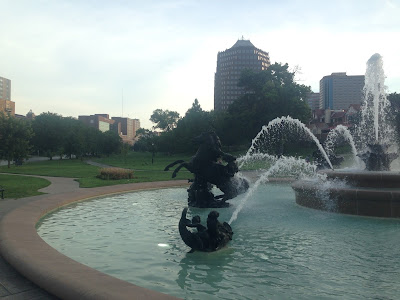 Word of mouth about the Plaza quickly spread throughout the city and the region, enticing early tourists to what is today one of Kansas City’s most cherished destinations. 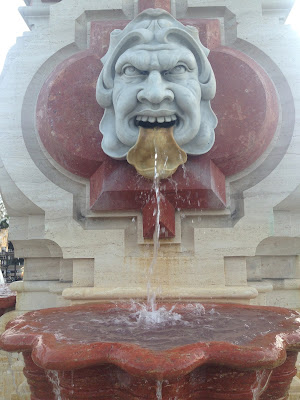