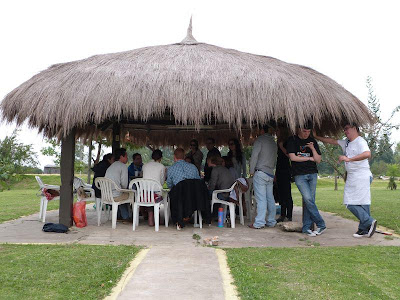 While in Asuncion I attended a barbecue / potluck hosted by a group of friends from Asuncion Couchsurfing. Couchsurfing is an online community for travelers. The event was held at a country club outside under a little bungalow structure. I had connected with some other travelers named Jamie and Sebastian and invited them to join. 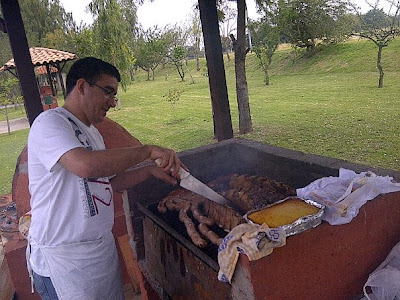 The event was a combination of an asado (bbq) and a pot luck. There was meat which was grilled over coals in an open pit. Lucio was the pit master. And then there were a number of side dishes that everyone else brought to share. 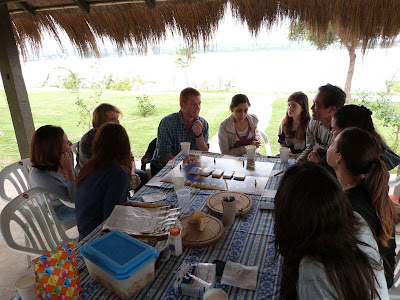 While the meat was cooking, we divided into teams of two and played a trivia board game. Luckily the questions were general in nature and not focused on any one specific country or topic. It was interesting and at times challenging because all the questions and answers were in Spanish. Some things may have been lost in translation, but overall I think my team did pretty well. 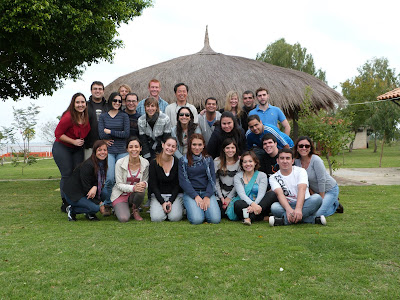 And at the end of the event we took the obligatory group photo.

During the event, I was a bit surprised that no one really talked about the current political situation. Everyone seemed to be enjoying the day, enjoying friendships and enjoying life.

As a tourist destination, in comparison to some of the other countries in South America, Paraguay many not have many quaint colonial towns, or mountains ranges, or wild jungles, or vast desserts. And it may have some political problems.

But Paraguay does have some of the most resilient, genuine and friendliest people that I have met in all of my travels in Latin America.