Asuncion... A Walk Around the City

I do not think that Asuncion is generally thought of as one of the great cosmopolitan cities of the world. However, I found that it is a place that has a unique character of its own. There is the downtown area... which consists of principally governmental and historical buildings. And then there are the Suburbs... where people live and shop and enjoy life. 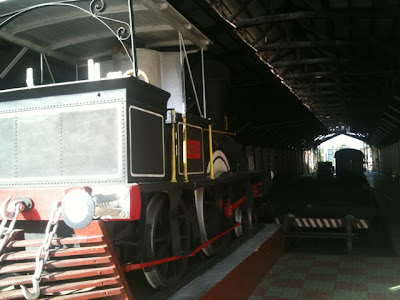 In the center of town there was an old train station that was no longer functioning. The Asunción - Encarnación railway line was the first of its kind in South America. The station now serves as a museum and as a remembrance of the importance that the railroad system once had in Paraguay. 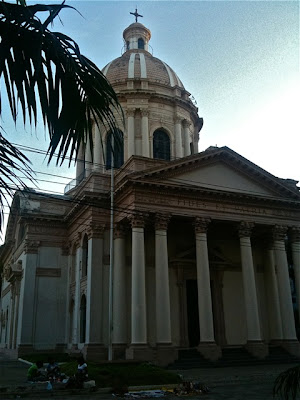 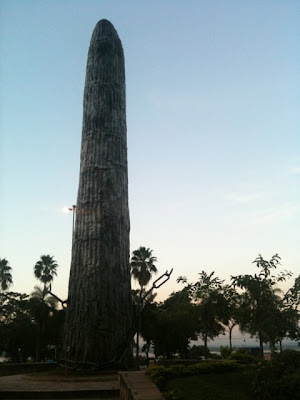 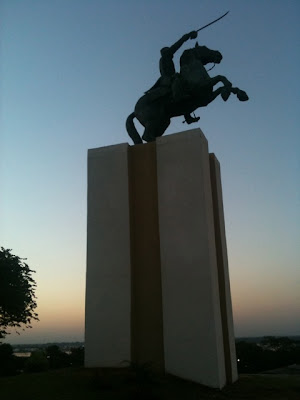 I believe that this was a statue of General San Martin, the liberator of South America. 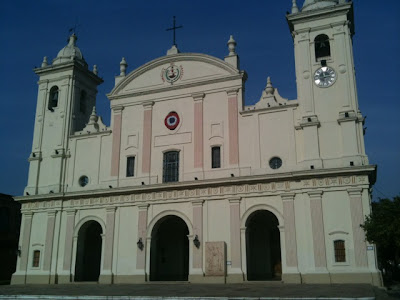 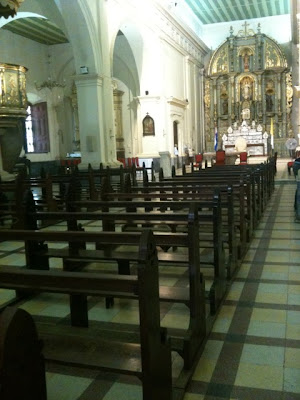 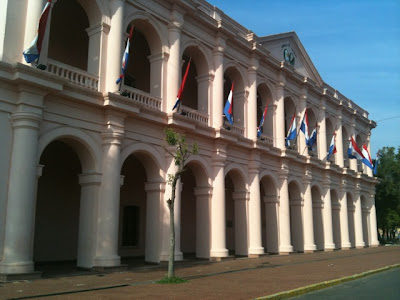 El Cabildo... is the former congressional building which is now a museum called the Museo del Congresso Nacional (Museum of the Nacional Congress). 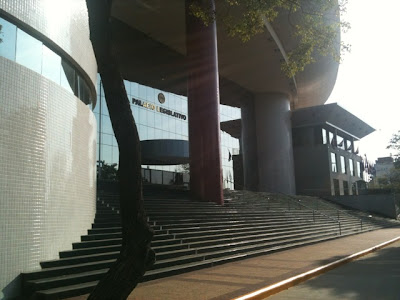 If you follow current events... about a month prior to my arrival in Paraguay this building was were another historical event in Paraguay's chronology occurred.

Basically... on June 22, 2012, the National Congress conducted a vote and impeached the President.

At the time, I was in Bolivia applying for an entry visa for Paraguay. It would have been very interesting to have been standing on these steps just a month prior.

Political Backstory: In the 2008 general elections, the ruling Colorado Party was highly favored. Their candidate was Blanca Ovelar, the first woman to appear as a candidate for a major party in Paraguayan history.

Lugo won with nearly 41% of the vote, compared to almost 31% for Blanca Ovelar of the Colorado party. Lugo's victory ended 61 years of conservative rule by the Colorado party. With much optimism, the Fernando Lugo administration highlighted the reduction of corruption and economic inequality as two major priorities.

Outgoing President Nicanor Duarte Frutos hailed the moment as the first time in the history of Paraguay that the government had handed power to opposition forces in an orderly and peaceful fashion. Lugo was sworn in on August 15, 2008.

Since 2008, unlike other South American countries such as Venezuela, Ecuador and Bolivia, Lugo's leftist agenda remained largely unimplemented.

Political instability in the past year, fueled by disputes within Fernando Lugo's own cabinet, had led to a decline in Lugo's popularity.

In addition, Lugo's administration came under criticism after 17 people died during armed clashes between police and peasants when the police were enforcing an eviction order during a land dispute. Eight police officers and nine farmers died.

On June 21, 2012, impeachment proceedings against President Lugo began in the country's lower house. Lugo was given less than twenty-four hours to prepare for the proceedings and only two hours in which to mount a defense. Impeachment was quickly approved.

A following vote in Paraguay's Senate, also controlled by the opposition, ended with the removal of Lugo from office. Vice President Federico Franco assumed the duties of president.

Lugo's supporters quickly gathered outside Congress to protest the decision as a politically motivated coup d'état. Lugo's removal from office on June 22, 2012 was considered by some neighboring countries, especially those currently governed by leftist leaders, as a coup d'état.

So one month after the impeachment of the President by the Congress I walked in front of these governmental buildings in relative peace. 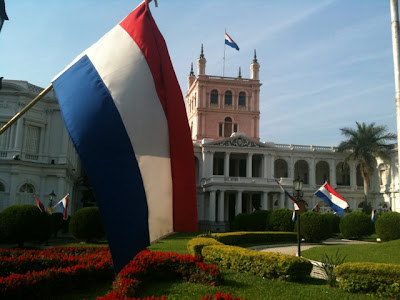 I passed by the Palacio del Gobierno (Governors Palace) were the president normally resides. At the time of my visit, it was still a little uncertain who was occupying the palace. 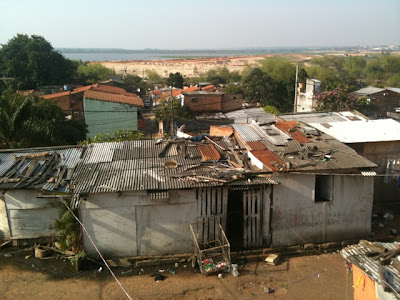 I passed by these Favelas that are located east of the Palacio del Gobierno. The Favelas were slowly being dismantled and the inhabitants were being pushed out. Something blue. 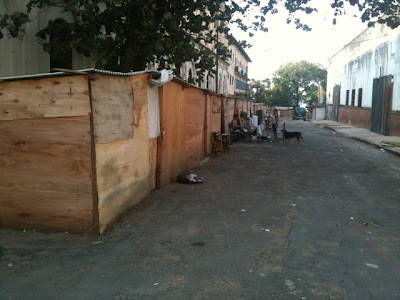 However, it appeared that the inhabitants simply moved around the corner. It created an interesting contrast in which one could see the modern Congress building, the beautiful Palacio and the Favelas all with one or two square blocks. 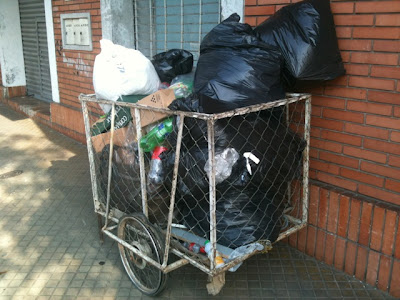 This is a trash and recycling cart. One interesting aspect about poverty in this city is that it has led to the development of cottage recycling industry in Asuncion. There are people that push these carts around and collect recyclable goods. Some homeowners and businesses even separate the recyclables to make the collection of the goods easier. Is it a good thing or bad thing. I am not one to judge. It is just the way things are. One man's trash can be another man's treasure. 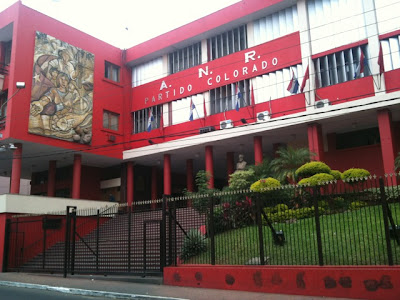 As I walked back to my hostel, I passed by the office building of the Colorado Party. It was huge... encompassing a whole city block... almost a monument in and by itself.

I believe that there will be new elections in Paraguay next year. It will be interesting to see what will occur. I can only hope for the best. Paraguay is a lovely country. 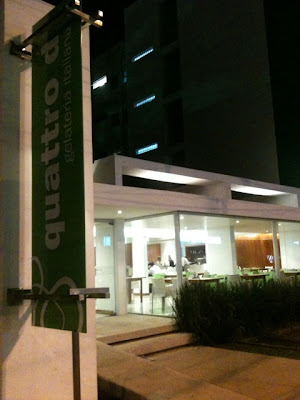 Later in the day, I hopped on a bus and visited the suburbs. I visited a shopping mall and had dinner. After dinner I thought that I would treat myself  to a little dessert. I heard about an ice cream store that supposedly had some of the best ice cream in Asuncion... Quattro D. 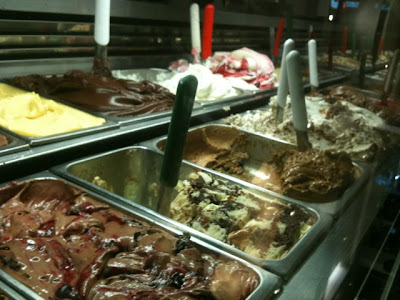 And, it did not disappoint. They had a number of artisan ice creams. Lastly... something sweet!