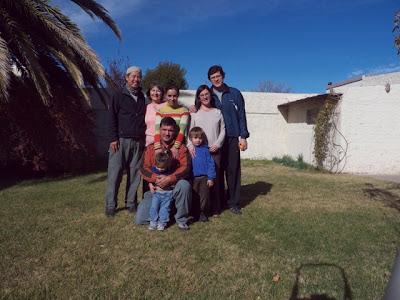 I traveled to San Rafael to visit a friend and fellow adventure motorcyclist named Alejandro whom I had met while traveling from Peru to Chile. Alejandro's family welcomed me with open arms. Upon my arrival I had the chance to meet his mother Rita, his girlfriend Noelia and his cousin's family. Alejandro is a chemical engineer by profession and works at a local university. Rita is a retired teacher. Noelia is an art instructor. And his cousin and wife are both physical education instructors. The kids are just kids, they like to play. The first thing they introduced me to was a nice lunch. 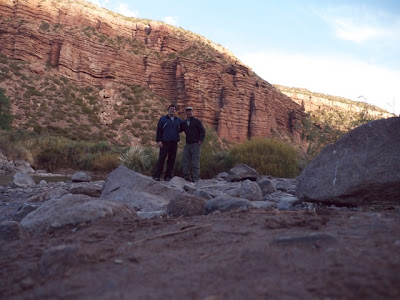 In the afternoon, Alejandro took me to a place called Valle Grande. It was a beautiful area which contained a lake and river surrounded by a mountain range. 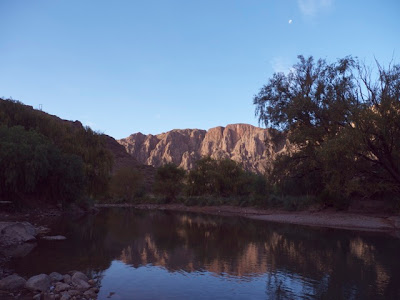 Supposedly in the summer the place is swarming with tourists from all over Argentina. 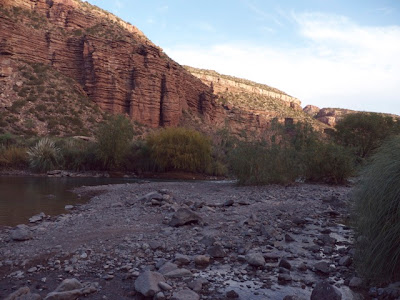 But, luckily at this time, it was quite and peaceful and simply stunning. 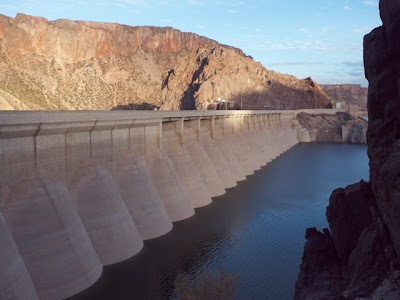 The lake was formed by a dam. 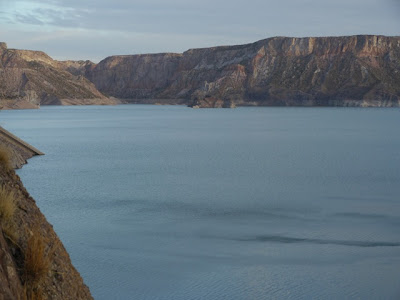 It created a reservoir that was used for boating, fishing and water sports. 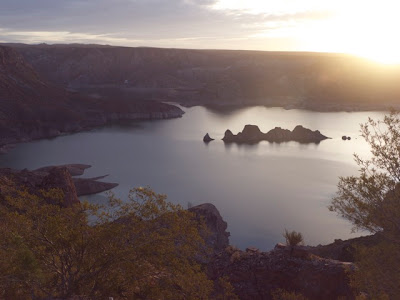 And was pretty nice to just stare at and take in it's beauty. 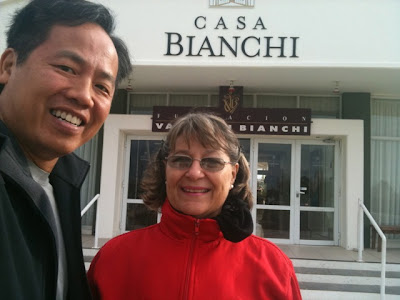 The next day Alejandro had to work. So Rita took me on a little tour of the town. The first stop was a winery call Bodega Valintin Bianchi. 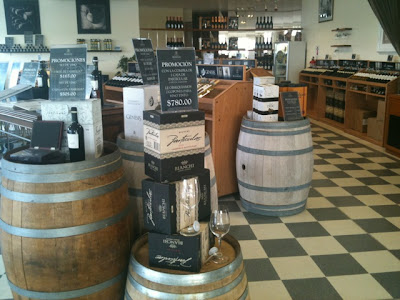 They had a very nicely laid out display of their varietals. 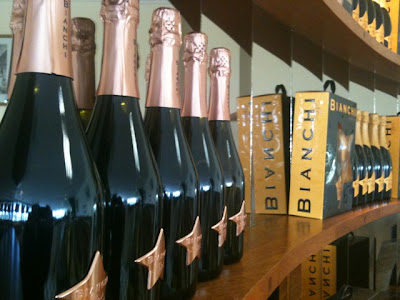 They are probably most famous for producing sparkling wine (champagne). 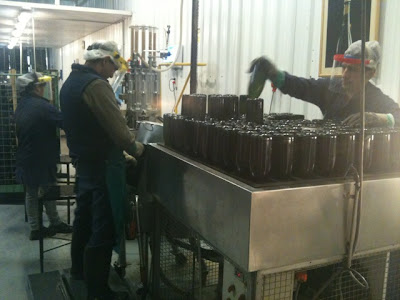 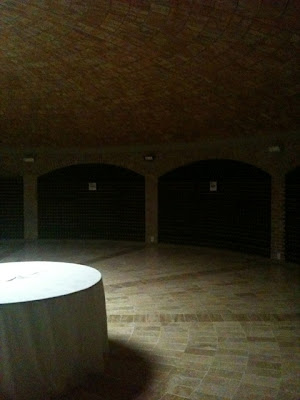 Rita had visited the winery previously. She knew about a special cellar in which the Bianchi family kept a private collection of wines and champagnes. She asked the guide if we could view cellar and as a favor the guide allowed us to view it. The cellar was dark, circular and filled wall to wall with the family's finest collection of wines. 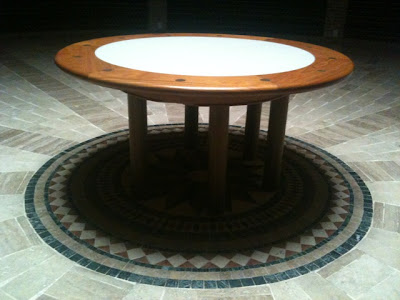 This table was built on commission by the founder Valentin Bianchi. The table has six legs representing the six children of the family. 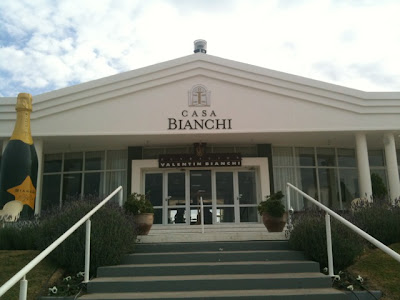 At the end of the tour we had the chance to taste some of the champagne. I tasted a little bit, but it was still pretty early in the morning to be drinking champagne. So instead I bought the bottle that appears on the left for later consumption. 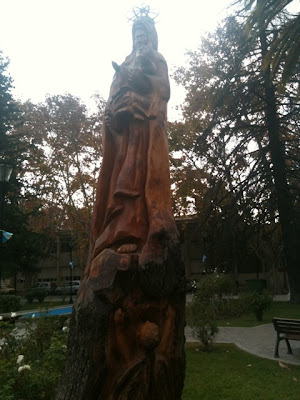 Next, we walked around the town a bit and through the central park. The town converted old dying trees in to pieces of art by carving statues such as this one. 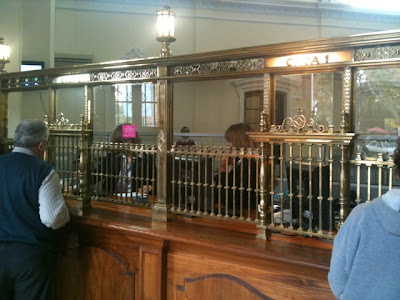 We passed by this old bank which has been converted into a municipal building. 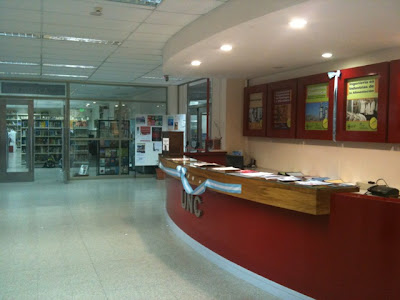 And, we visited the university at which Alejandro works. 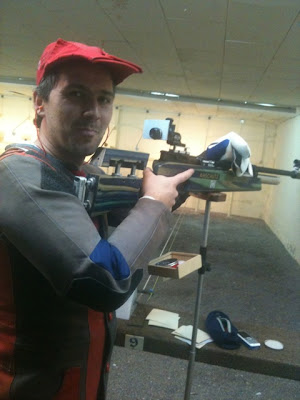 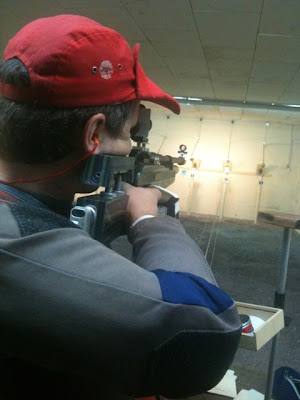 This style of marksmanship requires the use of special air rifles, suits, hats, glasses, gloves and shoes. 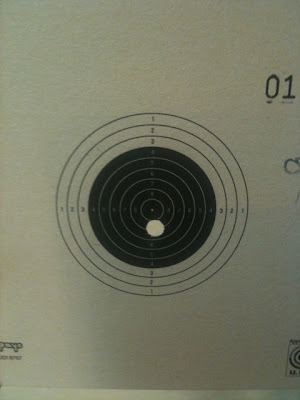 The target is 10 meters away and contains concentric circles. The largest circle is only about 2 inches wide. Points range from 1 to 10. 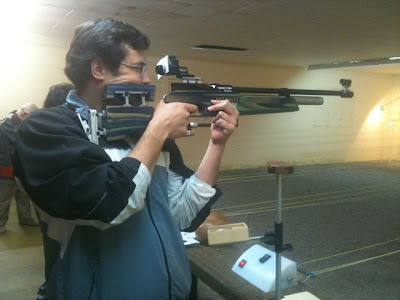 It turns out that when Alejandro was young he was one of the top marksmen in San Rafael and in Argentina. He would compete in olympic style events and according to his friends he won quite a few trophies. 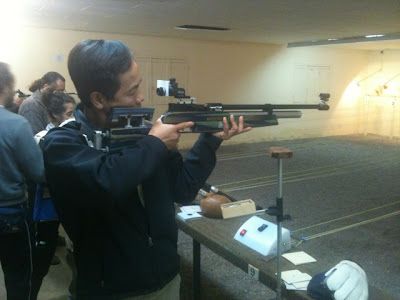 Adrian let me take a shot. The action on these rifles is incredible. To fire the rifle only a gentle touch is needed, similar to the feeling of a feather touching your skin. 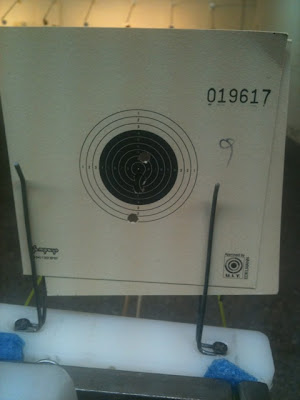 My first shot hit the outer ring... 1 point. After I realized how delicate the trigger mechanism was, I took another shot. My second shot hit a 9. Not bad for a first attempt with an olympic rifle. Guns and shooting... it is in my blood as a native Texan. 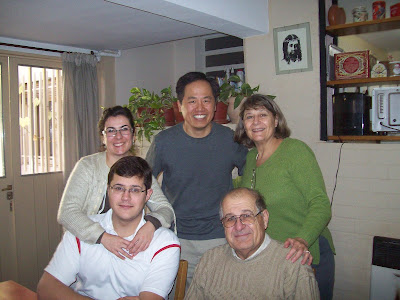 Over a few days Alejandro and his family showed me incredible hospitality. They provided me a bed on which to rest, filled me with food, took me to a winery, introduced me to olympic marksmanship, took me to a friend's birthday party and showed me the best of San Rafael. During an excellent asado (BBQ) meal, I had the chance to meet Rita's brother and sister. Her brother gave me some great advice on places to visit in northern Argentina. Alejandro augmented this info with some route suggestions and a map. Alejandro also helped me wash and complete some maintenance on my motorcycle. I do not know if I will ever have the chance to truly return the kindness that I was shown. I hope that I do. 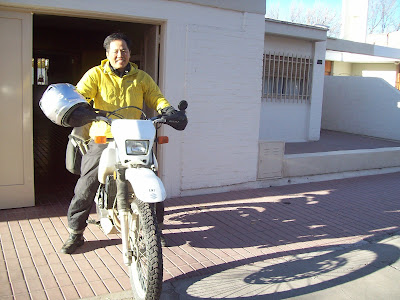 I must say that I was happy to visit Alejandro and his family, but I was sad to leave. They truly made me feel at home. Alas, the weather was starting to turn cold. I needed to head north before the cold, rain and snow set in.

I rode off into the cold, but with a warm heart.