Out fished by a kid with rocks 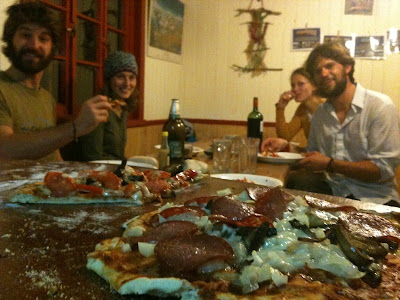 I was staying in the town of Puerto Varas and hanging out with some folks... Brian and Emily from Montana, Friedenka from Germany and Ryan from California.

The areas where each of them live are great outdoor and fly fishing areas. We started talking about fishing and they decided that it might be interesting to try their luck and accompany me on one of my little fishing excursions.

I usually ride my motorcycle to find some remote areas to fish. But these folks were traveling independently and didn't have any personal transportation, so we decided to go somewhere close by that we could reach by bus.

We decided to try the Maullin river near the town of Llanquehue. It was only a short 10 minute bus ride and cost $1. I mentioned to the bus driver that we were interested in fishing the Maullin and asked him if he could drop us off near a spot along the river. He did.

We walked a little bit and found a spot near a bridge.

The river was running pretty swiftly and at it's deepest the river was probably 25 feet deep.

We fished a while and Ryan caught a small rainbow trout and released it.

I wasn't having any luck.

After a while I decided to walk across the bridge to see if I could spot any fish in the river.

Sure enough I could see a few fish between 12 to 20 inches long swimming in some deep water in the center of the river. The fish were probably 50 feet from the bank of the river and 20 to 25 feet down. It would be a challenge to catch the fish where they were located.

A little further down the bridge there were two kids. One skinny kid and one chubby kid. The chubby kid had a plastic coke bottle that he had turned upside down and was banging it on the ground. From the distance I could not tell what they were up to, but I thought that it would be fun to check out.

As I neared the two kids, I figured it out.

The chubby kid had a coke bottle full of worms and he had it turned upside down to get the worms out. The skinny kid had a can with fishing line wound around it with a hook at the end. They were going fishing.

I greeted them as I approached.

They saw that I had a fishing rod and reel and asked if I'd caught anything. Somewhat embarrassed, I said no.

I examined their setup. The chubby kid had the bottle of worms. The skinny kid had a can with fishing line wound around it. At the end of the line he had a treble hook - a hook with three hooks. He was attaching the worms to the treble hook. I've seen similar setups in many places. It's all one really needs to fish. A can, a line, a hook and some bait.

The thing that I noticed that I found interesting was what the kid was using for weight. He had a plastic bag that he had filled with rocks that he had attached to the line. Amazing!

Obviously he had local knowledge. He knew that he needed weight to sink his bait to the bottom of the river.

I realized at that moment that I was witnessing pure genius in action. I had no doubt that these two kids were going to catch something.

I watched as the kid finished baiting his hook. He then lowered the line down over the side of the bridge and into the water.

In the states and in many places it is illegal to fish off a bridge. I suppose for safety reasons for both the fishermen and the passing cars.

Of course, whose going to stop two kids fishing with with a can, line, hook, worms and rocks.
I wished the kids well and moved on.

I walked down the bank to meet the others. They were packing up to leave. I told them about the two kids. I mentioned to the others that I was sure that they were going to catch something.

No more than a minute later there was a fish flying by my head. I looked up and saw the kid up on the bridge...and a fish dangling on his line.

The kid had caught a fish. He had it suspended out of the water and he was hauling it over to the bank of the river. I asked if he wanted me to unhook it. He said no. Once he got the fish over land he pulled it up over the side of the bridge.