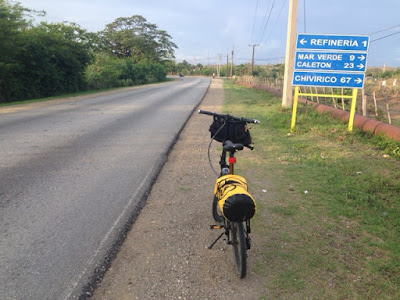 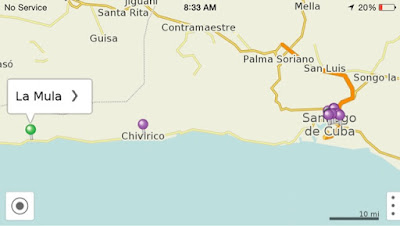 The plan was to ride to a town called La Mula where there was a Campismo or if I got tired I would stop in a town called Chivirico.

Leaving Santiago de Cuba I passed through an industrial area which I believe was an oil refinery. When I passing through the town of Mar Verde I passed by a local guy out riding his bicycle. He seemed to take interest in my unusual bicycle setup. For about 1km he followed closely behind me, but never passed me. After a while he caught up to me and began to ride beside me. We began to talk. He was a young guy that worked as a machinist at the refinery. In his spare time he enjoyed riding his bicycle in the countryside. He had bought a frame, aquired some forks and handlebars and fabricated many of the other parts like the hubs and cranks. I shared that I was trying to ride across the country. He decided that he would accompany me for the day. Just like that I had a new friend and bicycling partner. 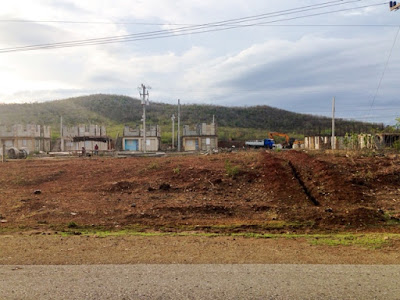 We passed this development on the outskirts of Mar Verde. It looked like a new housing development project for workers. 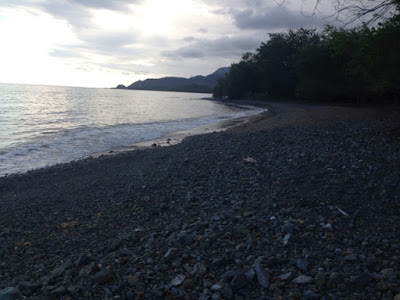 We rode along the southern coast for about 50km. There were a number of mid-sized hills. I only had to get off my bicycle and push once. I think that having a riding buddy encouraged me to ride over some of the steeper hills that I normally would have walked. It also helped me to push through the pain in my butt that I was experiencing due to a little saddle soreness. 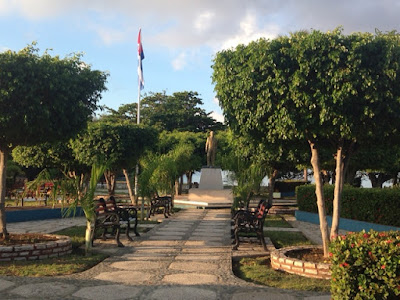 After riding for about 4 or 5 hours we eventually reached the town of Chivirico. I decided that I would look for housing and stay the evening in this small seaside town. There was a nice little park in the center of town. My bicycling friend decided that he would turn around and head back home. He would probably cover the distance we had just rode at a quicker pace in about 1 or 2 hours. 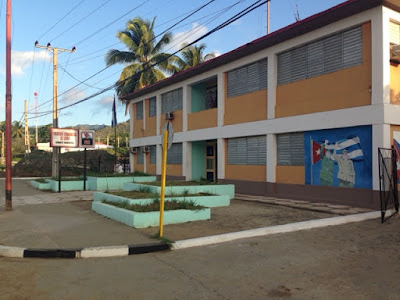 Across from the park was the Communist Party office. 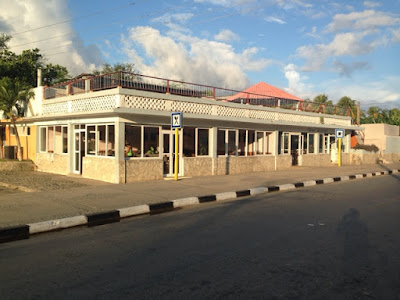 And just down the street, I located one of the four cafes in town and asked for a bocadito (sandwhich) and refresco (drink). I was served a sandwhich which I believe was bread with either pig ears, pig intestine or both. It wasn't exactly what I was expecting, but I ate it. There were some locals standing around and watching as I ordered it. I couldn't not eat it. It went down slowly even with the help of two glasses of refresco. I was still hungery and went next door to eat at the sit down cafe. There I ordered a plate of pollo guisado and arroz (stewed chicken and rice). It went down a little easier.

After my meal, I went back to the park to relax a bit. While I was resting I met two other travelers. They were an Italian couple that has been traveling around the Caribbean as crew on a sailboat during the sailing season. Now that the huricane season was approaching, the sailing season was ending. They were thinking of moving to the north east coast of Brazil to open a hostal or B&B. We had a pleasnt conversation in Spanish about traveling, sailing and operating B&B. I shared my experience with airbnb and they were contemplating using it. 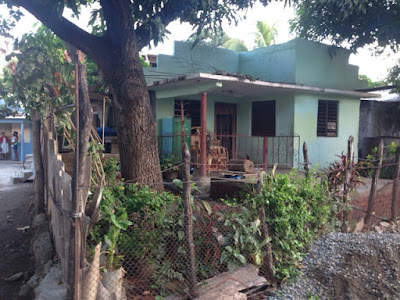 The Italian couple put me in contact with a local jentero (fixer) who helped me locate a casa particular. The place wasn't great, but the hosts were nice, accommodating and it was a place to sleep for the night. 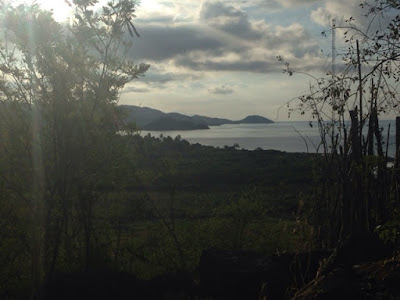 The next day I got up early and began riding. The weather was cooperating. 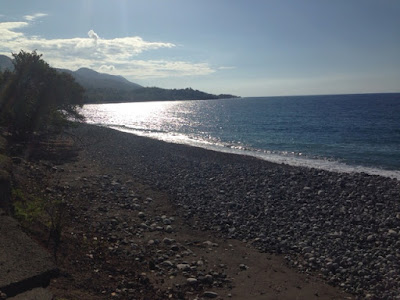 It was a nice sunny day with a few clouds to provide cover. 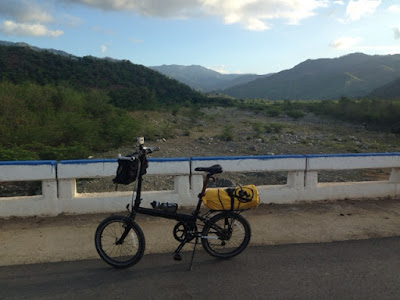 On the right was the Sierra Maestra mountains. 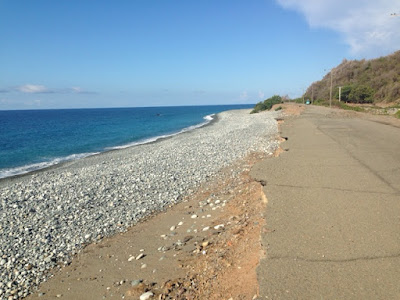 On the left was the coast and the broken and crumbling carretera. 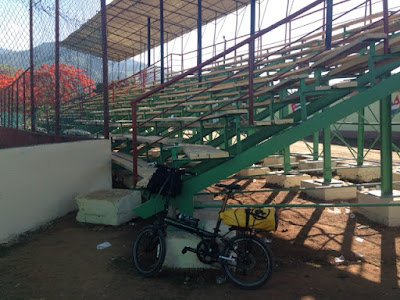 I passed through this town with a beautifully built baseball field. 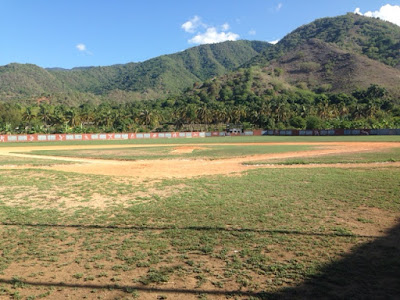 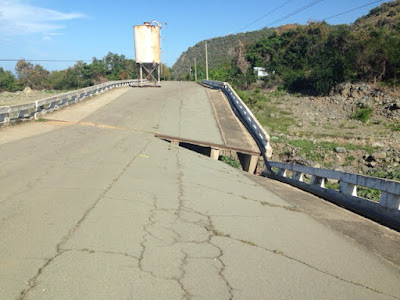 I continued riding. There were definitely some signs that the infrastructure and in particular some bridges were in need of repair. This bridge was cracking, broken and tilting. I still rode over it with no problems. But this may be one reason why there was such little traffic on this route. The whole day that I rode I recall one motorcycle passing me and two pickup trucks going the opposite direction. Just one of the reasons one does not need to worry about auto traffic in Cuba. 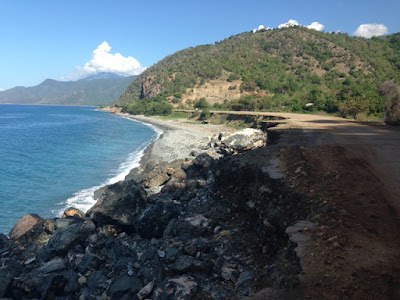 Another beautiful view of the ocean, mountains and the crumbling path less traveled. 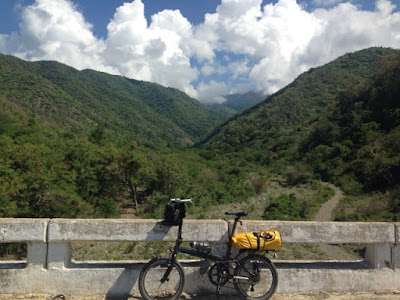 This part of the Sierra Maestra is know for being the area where Fidel and Raul Castro and Che Gavarra camped out while plotting the Cuban revolution. 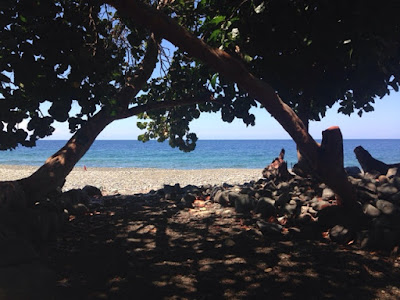 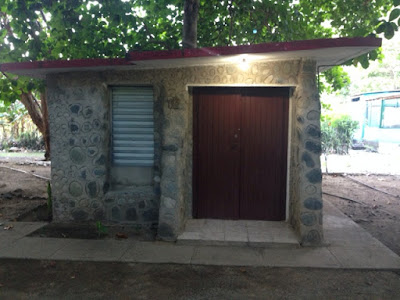 My little tiny house kept me dry from the afternoon rain showers. This particular Campismo was pretty lively with Cubans hiking, swimming and roasting whole pigs over campfires. I rested in my hammock and enjoyed reimagining my ride over the past two days.