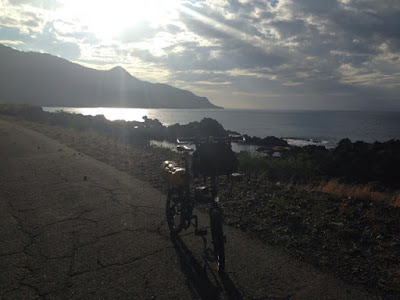 From La Mula I got an early start. The morning sun was hitting my shoulder and every once in a while I would look back to see the sun rise higher in the sky. 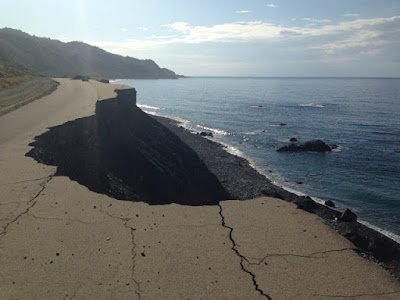 It was nice too look back and see how far I had ridden, but also needed to avoid a few obstacles in the road by looking forward. 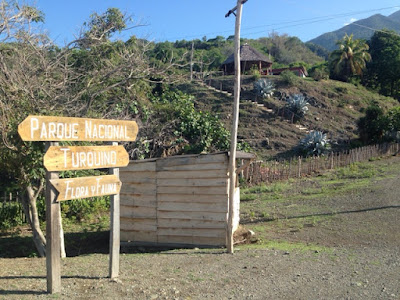 I passes by this national park called Turquino, but I did not stop. It was still early and it appeared that the administration office was not open yet. 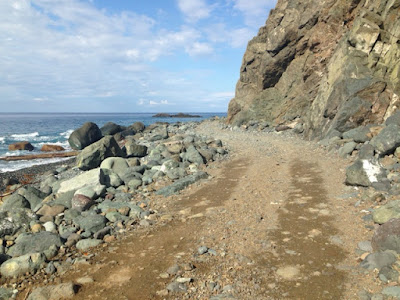 At some point the asphalt road turned to dirt and gravel. This area was probably the most rustic and beautiful part of my ride so far. I had shear rock cliffs to my right and crashing waves to my left - sometimes only 10 feet away. 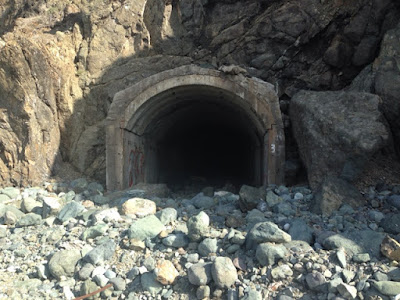 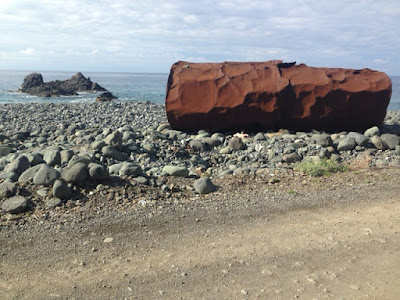 30 feet off the shore was a jagged series of rocks. They looked like the spine of a dinosaur or a sea monster porpoising toward the shore. I imagined that any boat that was unlucky enough to strike the rocks would be sliced open. There was this 20 foot long rusted metal container lying on shore which perhaps feel victim to the rocks. 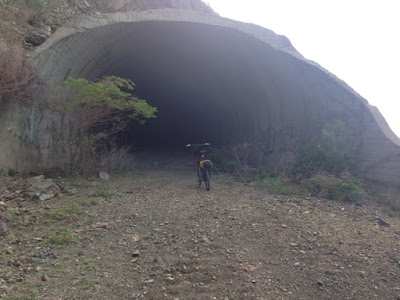 I found another tunnel which was larger and deeper. I was very tempted to explore it. This is one of those times when I had to use my judgement. I could explore the tunnel and it might be fun. I could explore the tunnel and I might never come out. I had been riding my bicycle all morning for about 5 hours and only saw 3 cars. And those 3 cars were heading in the opposite direction and I saw them over 3 hours ago. I realized that I was all alone and if I needed help it might not be hours, but days or weeks before anyone might be nearby. I elected to continue riding. Live to tell the story. 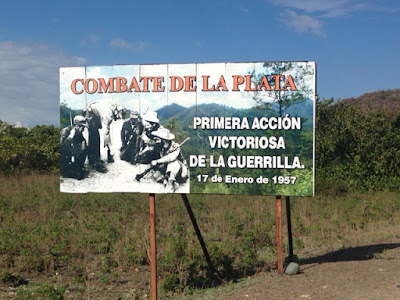 This area called La Plata was were Fidel, Raul and Che had one of their first victories over Bautista during the revolution. 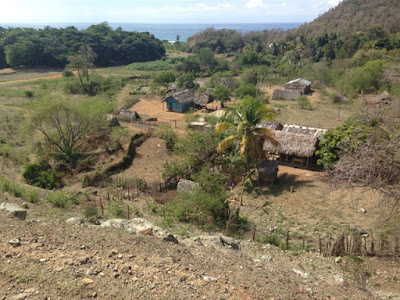 This area was pretty remote. The houses were still built of rough wood with thatch roofs. The people were living off the land and sea. People were thin. It seems that the first victory may have occurred in this area, but it appears as though the revolution may not have fully delivered on its promise to the people of the area. 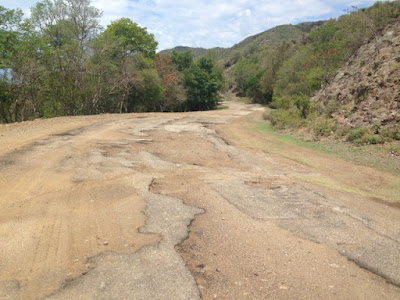 The roads were either dirt... 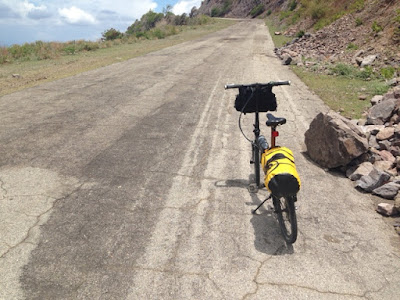 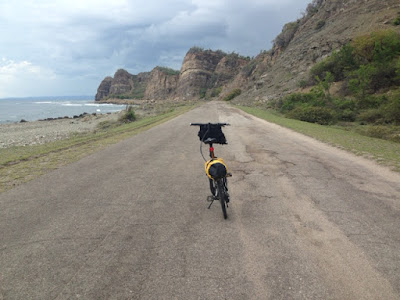 I had this dirt road all to myself for hour after hour, so I would ride right down the middle not worrying about any traffic. 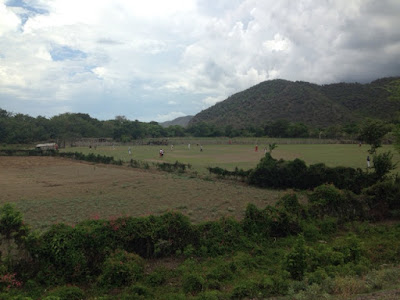 As I kept riding, I eventually reached an area that was more developed with farmland. I was starting to get tired. This ride was mostly level, but there was about three hills that were a decent challenge. 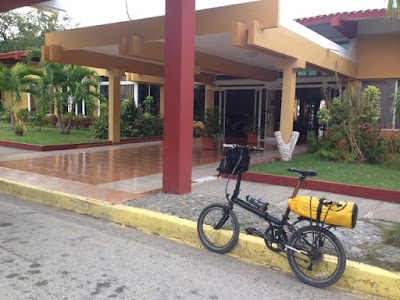 I finally reached a small town called La Marea. On the outskirts between the town of La Marea and Pilon there was a resort called Hotel Marea de Potillo. Just for kicks I thought that I would inquire how much a room might cost. When I asked the front desk clerk I was surprised to find out an all inclusive single room was 32cuc. This would include the room, all meals, all drinks and use of the facilities. This sounded too good to be true, so I decided to stay. 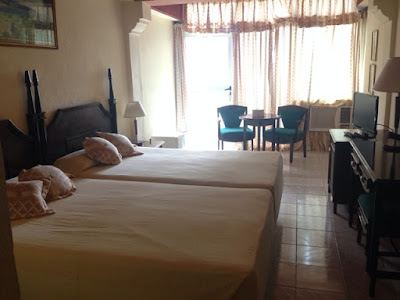 The room was nicely appointed and spacious. 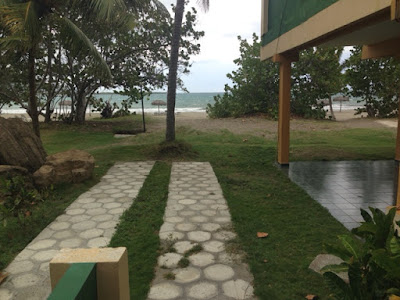 There was a back door to my room that lead to the beach which was about 100 feet away. 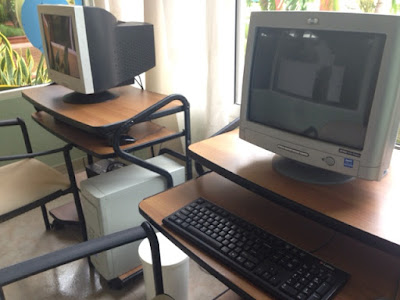 There was a little computer and internet room. 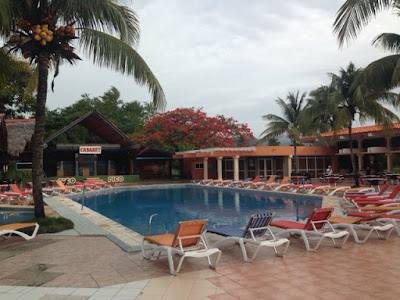 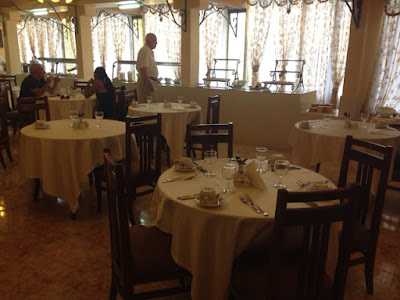 There were three meals a day in the dining room and they were always an all you can eat buffet. 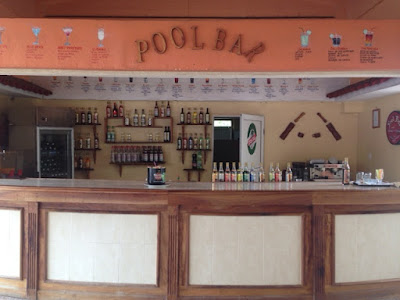 And there was a bar open until 2am with free drinks.

I thought that I had reached paradise.

Well, the door to the beach did not open. That's okay, I would just exit through the front door and walk around the corner. The snack bar had a menu with about 10 items, but the only thing really available were hamburgers and fries. The free drinks were pretty watered down. And the food... well... it reminded me of a day when my primary school cafeteria served food that none of the kids wanted to eat. The food was pretty bad.

I still ate, drank and took advantage of the hotel facilities. While traveling I try to not dwell on the things that do not meet my expectations, but revel in the things that are in front of me.

I rested in my comfortable bed and air conditioned room, ate all that I could to regain some weight and energy, and just enjoyed watching some CNN, US baseball and a few movies. I would stay for two days, then I would move on.