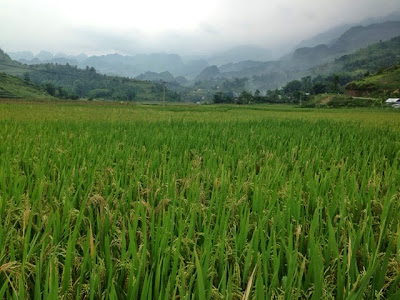 I woke up later than I wanted to, perhaps I was tired from the long ride from the previous day. I picked up some bread from the little bakery and headed down the road.

My objective for the day was to reach the town of Dong Van which is the northernmost town in Vietnam and a place where there is a colorful market on Sunday that is attended by many of the various hill tribe people. It is not well known by the backpacker crowd, and I actually discovered that it is not known by many Vietnamese. But my Vietnamese friends in Hanoi told me about it and encouraged me to try to visit it.

I encountered a million shades of green. 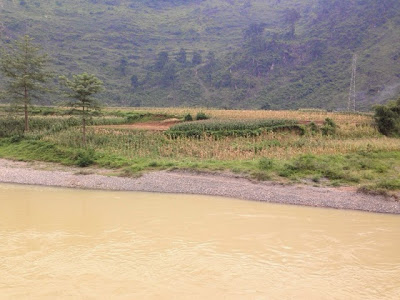 I passed over a muddy river. There was farmland all around. 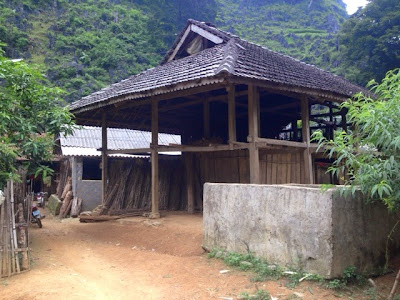 Away from the city I passed by village after village. The houses were no longer made of brick, but were made of wood and bamboo and elevated on stilts. 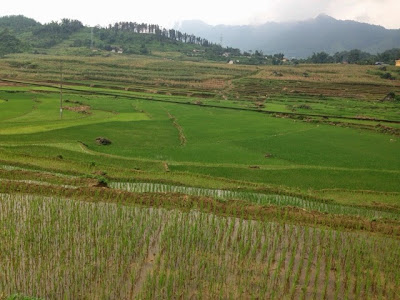 Rice fields as far as the my eyes could see. Some were deeply seeded and lushly green. Some were newly planted in orderly rows. 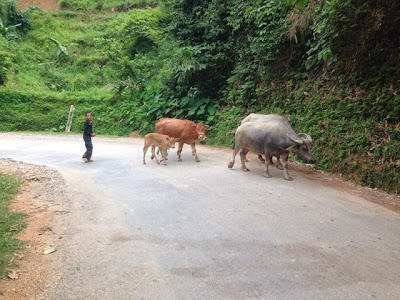 When riding around the corners I traveled slowly because on the other side might be an ox, a cow or a kid. There was enough space for us all to share the road.

A panarama photo of the long and winding road. 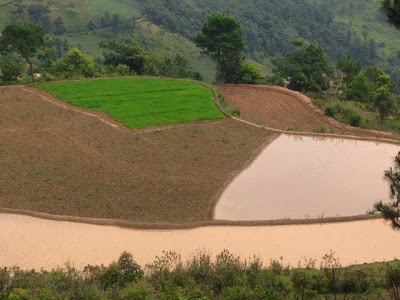 A combination of dirt, water and rice seedlings would hopefully yield a good harvest. 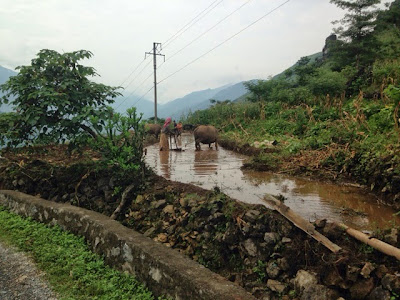 Around this bend was a mother plowing a small patch of a rice field with a traditional wooden plow attached to an ox. It doesn't get any more real than this. Her two children were trying to help round up two smaller oxen, but they seemed to be playing more than working. One girl that was probably 6 years old was trying to lead a small ox out of the field so that her mother could plow the field. The ox started to pull away. The kid held on to the rope, but slipped and fell into the muddy water. She lifted herself up out of the muddy water up and began to laugh. The other kid then chased the ox out of the patch. It was work, play and family all in one. 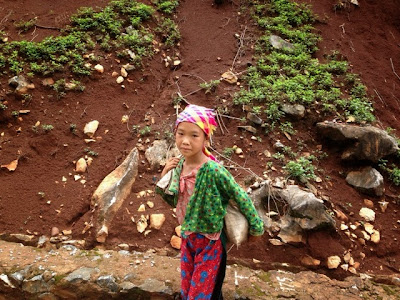 I encountered this little girl and her sister carrying something to the fields. It seemed the further into the mountains I traveled the more colorful the people's clothing became. 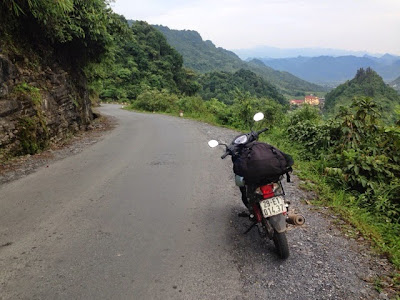 I was trying to ride swiftly because I did not know how long the Sunday market would last. But at the same time I wanted to stop and take a few photos of the beautify scenery and the twisty road. Truly it was a motorcyclist's dream. 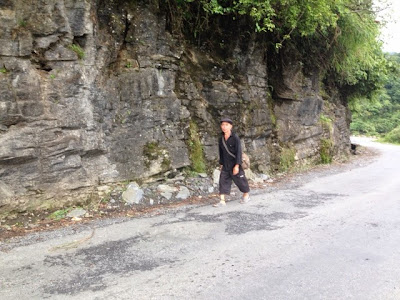 While I was stopped on the road taking the previous photo, this man wearing the traditional clothing of the people in this area walked by. I waved hello to him and he waved hello back to me. I held up my camera to show him the photo that I had taken. He smiled with an assured smile as if to say... yes I live hear and yes it is beautiful. 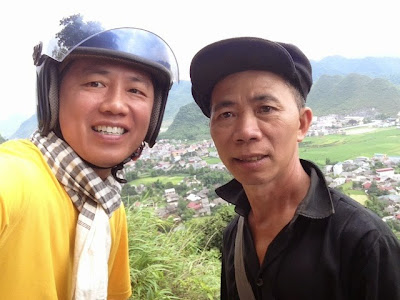 I then asked him if I could take a photo with him. He nodded his head in approval. I reversed the camera on my iphone and snapped this photo. I showed him the photo. He smiled, then continued walking on his way. 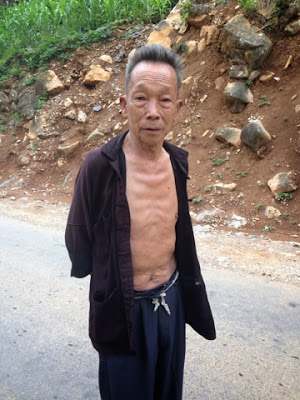 Then this gentleman walked by with a look of curiousity. 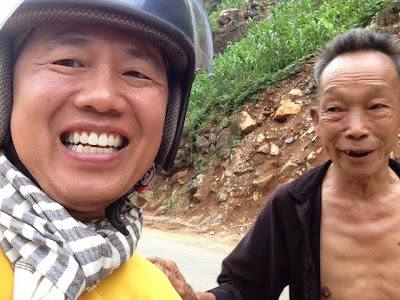 I motioned for him to step close to me. He was skeptical. But then I stepped close to him and snapped this photo. I showed him this image and he burst out laughing. I don't know if it was the image  of himself, the image of me or the image of this odd pair from opposites side of the world standing next to each other that was so funny. We both had a good laugh. He was walking in the same direction as I was riding so I motioned to him to ask if he wanted a ride. He nodded in agreement. I did not know how far he wanted to ride, but luckily it seemed that the road was going downhill. After rounding a few corners I saw a mid size town. I assumed that he was heading into the town. 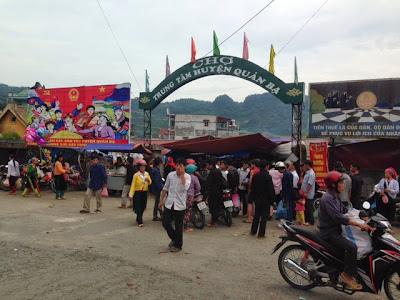 I did not know exactly where my new passenger and friend wanted to go, but I just assumed that he would tap me on the shoulder when we arrived. He actually knew exactly where he wanted to go. He started to motion to me to turn right, then left, then right, then straight. I saw a gathering of people ahead of me in an area that looked like a market. When we arrived to a clearing I slowed down to a stop. There was a crowd of people staring at us. I'm guessing they the sight of a foreigner giving a local a ride to the market was just not a common experience. My friend jumped off, we exchanged smiles, then he disappeared through these gates into the market. I thought about following him in, but it was already getting close to noon time and I did not know how much further I needed to ride. So I turned my moto around, wound my way through the town and back onto the mountain highway. 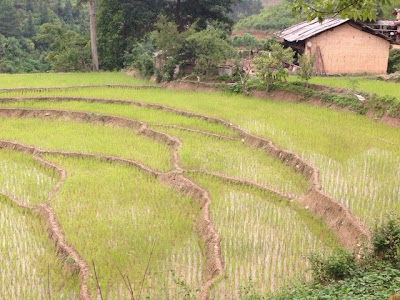 For about another hour of riding, I was surrounded by fields of plenty. 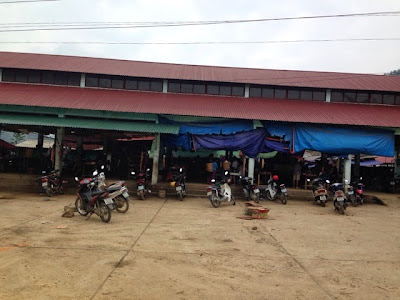 At around 1 o'clock I finally reached Dong Van. 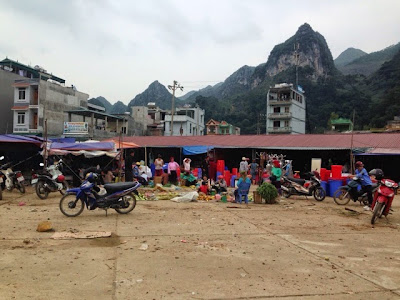 The Sunday market had already come to a close. I had an indication that I might be late because as I was entering town, I saw many people leaving town. Oh well. Sometimes you roll the dice and you end up rolling snake eyes. There were a few people still lingering around. 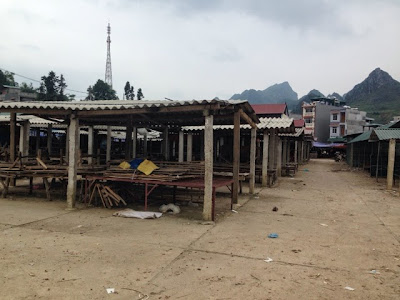 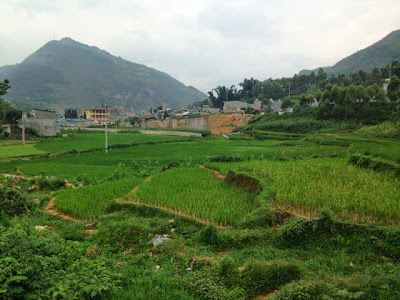 It has still be a beautiful ride of 10 hours the first day and 6 hours the second day, in order to see... nothingness. 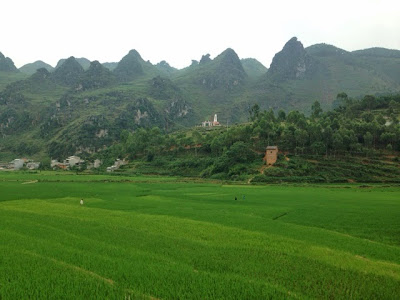 It was just a reminder that an adventure should really be about the journey and not only about the destination. 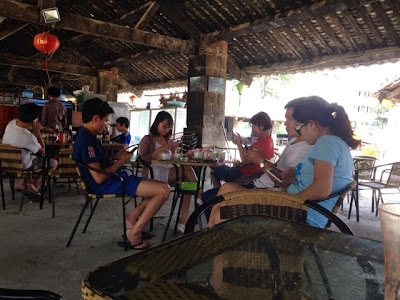 I found a little open air cafe to get a drink. At the table next to me was a group of Vietnamese travelers that had probably come from a big city to see the market. There was five of them sitting at a table, none of them were talking to each other, they were all deeply engaged with their phones or tables. What a shame. I finished my drink and decided to take a spin around the town. 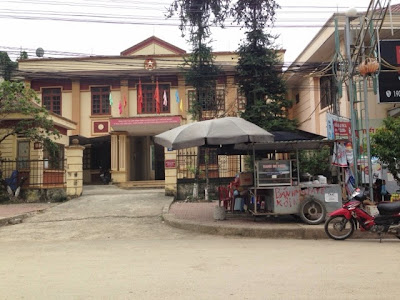 There was a police station. 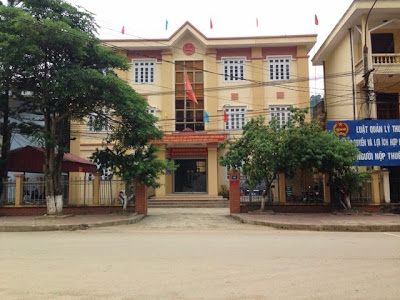 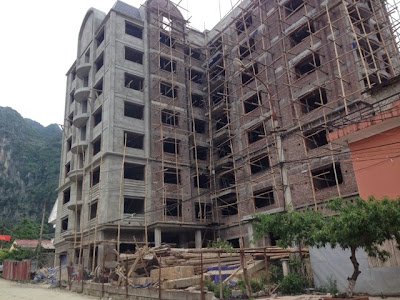 And there seemed to be quite a bit of construction going on. I don't know if the central government had identified Dong Van as a future potential tourist spot or if private investors were looking to jump on an early opportunity, but there was construction of new buildings everywhere. I'm guessing that in 3 to 5 years this place will be completely different. 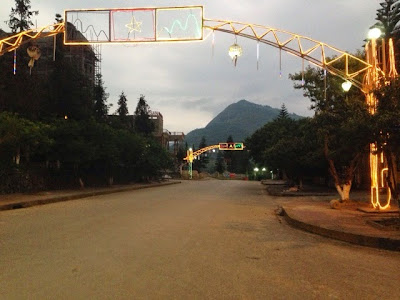 The sun began to set. I decided that I should look for a place to stay. I found a hotel. When I was checking in the clerk mentioned to me that I needed to check in with the police station and pay 250,000 dong because the town was situated so close to the Chinese border. I told her that I had a legit passport and visa and should not need an additional visa. She said that I did. We went back and forth about this for a while. I was actually concerned that if I got stamped with a second visa that it might void my original visa which was a 3 month single entry visa. She eventually mentioned that I could check in to the room, clean up, rest and then check into the police station later. This sounded good to me, all except checking in with the police and paying 250,000 dong.

So I checked in to the hotel and just kind of forgot to get the second visa.

The next day I rode around the hill country taking photos, then I would start to make my way South and West.
By Troy - July 11, 2014