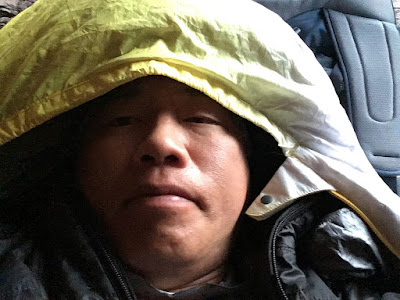 It was a cold night, but a cozy night as I stayed warm in my new sleeping bag and protected under my rock tent/shelter. A few months back I won this Therm-a-rest Parsec 20 degree down sleeping bag in a contest on Trailspace.com. During this past summer in Texas the temperature hovered around 100 degrees for over 100 days, so I did not have much use for a 20 degree sleeping bag. But I'm glad that I had it on this chilly night, I was completely warm. 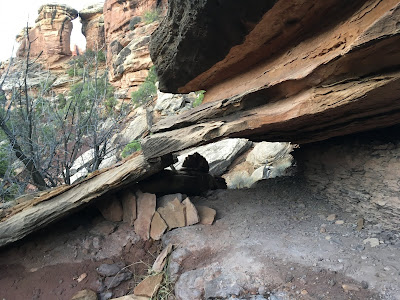 I packed up my backpack and bid farewell to my temporary shelter which had served me so well. I left no trace so that the next inhabitant, human or animal, might enjoy it as I had. 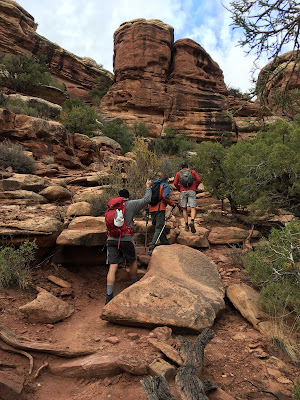 We then hiked about 2 miles to return to the trailhead and our van. By the time that we reached our van it was only noon, so we unpacked the food that we had stored in the van and prepared a quick lunch. We then set out to visit some historical sites within the Canyonlands. 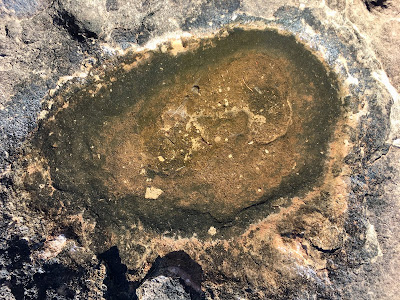 The first location that we visited is called Pothole Point. It consisted of some slick rock with a number of natural potholes. These depressions fill with water when it rains and create a microcosm which sometimes support life. Snails, fairy shrimp and horsehair worms lay eggs that survive the heat of the summer encased in dried mud. When the rain comes, they hatch within days and start a new life cycle. We didn't see much life, but there were a number of potholes. 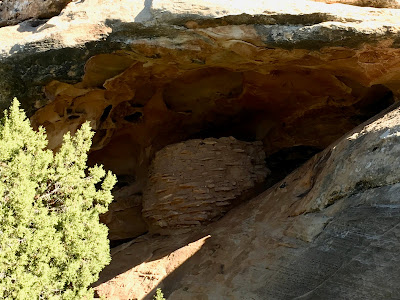 The next site that we visited is called the Roadside Ruin. It is an ancient ancestral granary built over 700 years ago of stone and dried mud by the Puebloans of Mesa Verde and Chaco Canyon. 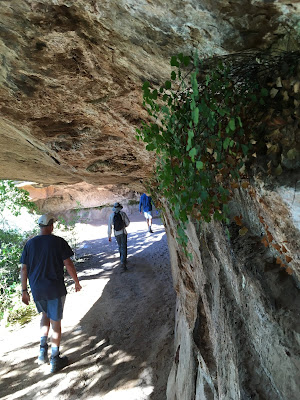 Another site that we visited was the Cave Spring Trail and Cowboy Camp. 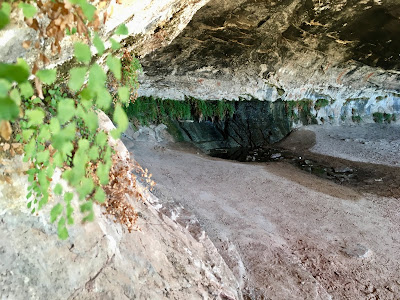 The Cave Spring Trail took us to a fairly large natural cave from which a tiny fresh water spring emerged. To most people the spring might look like nothing more than a puddle of water and mud. But to the early inhabitants of this area, the spring probably meant the difference between life and death. There really are not many sources of water in the high desert, so I can only imagine that this little spring was a valuable resource. 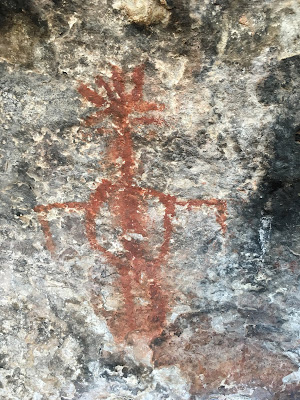 On the walls of the cave there was some rock art such as this anamorphic object. 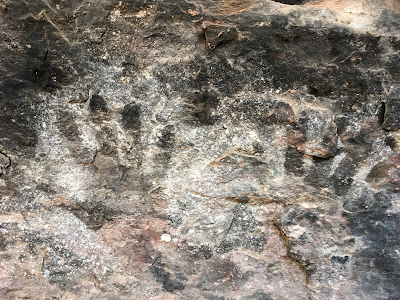 Also, there were these hand prints/shadows. 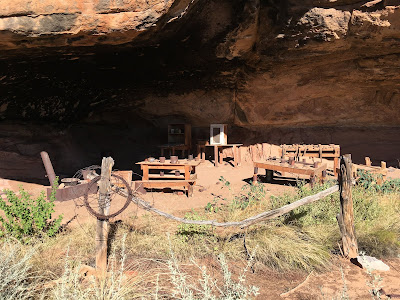 Not far from the spring was a preserved cowboy camp. 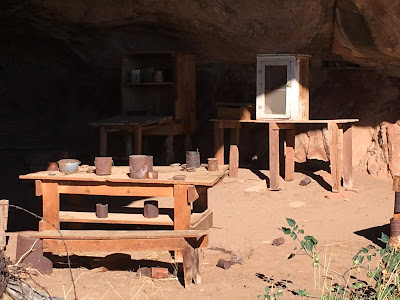 Scattered around the camp there were an assortment of tools of the trade for cowboys - tables, pots, pans, stoves, lassos, barbed wire, skinning and tanning tools and some random leather objects. 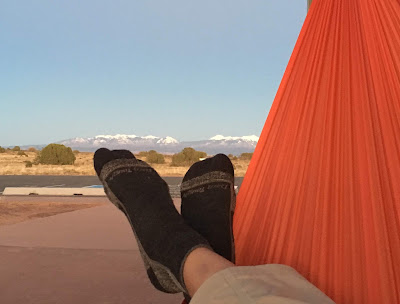 We returned to Dead Horse Point State Park to camp for the night. I strung my hammock up on the campsite shelter. 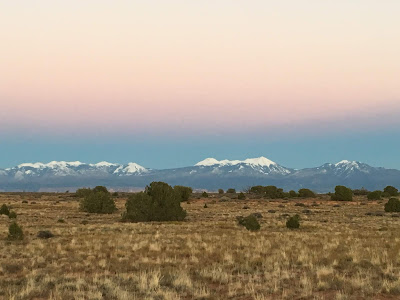 We arrived just in time to catch dusk overshadowing the La Sal Mountains. 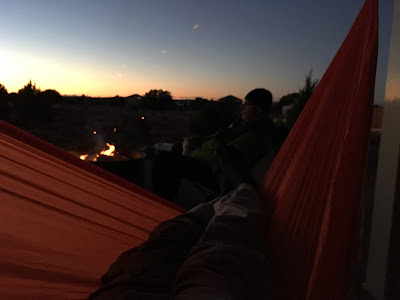 After dusk, I turned around in my hammock to catch the sun setting over our campfire. 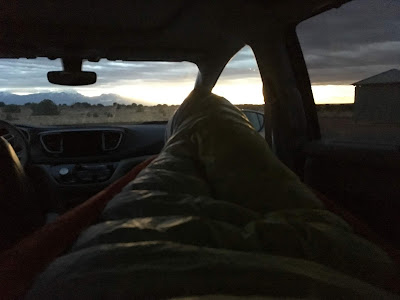 When we were driving back from Canyonlands to Dead Horse Point State Park we passed through Moab and had a chance to look up the weather report. The forecast predicted no rain, but temperatures dropping to 29 F (-2 C). I decided that instead of setting up my hammock under the campsite shelter that I would set it up inside of our van. I like to think that I adapt to any environment and situation. Ingenuity! 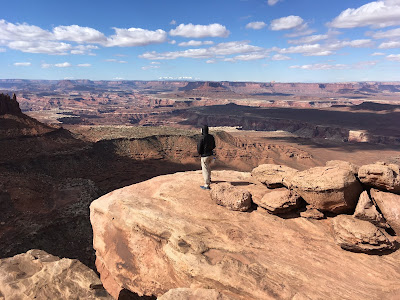 The next day we decided to visit the Island in the Sky District of the Canyonlands. 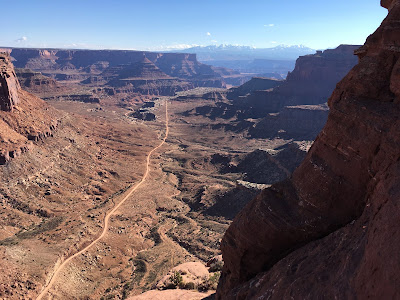 Island in the Sky is the easiest area of Canyonlands to visit in a short period of time, offering many pullouts with spectacular views along the paved scenic drive. 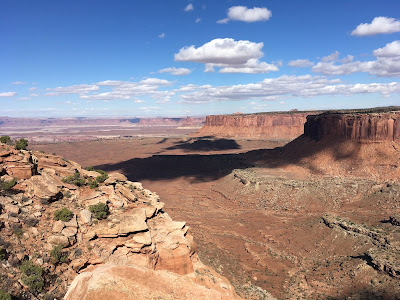 The Island in the Sky mesa rests on sheer sandstone cliffs over 1,000 feet (304 m) above the surrounding terrain. Every overlook offers a different perspective of the landscape. 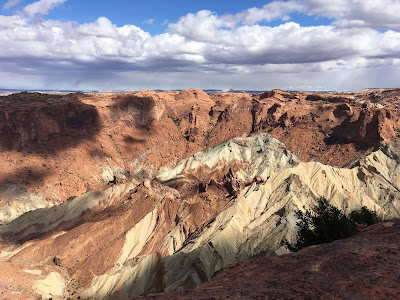 One theory was that the upheaval is a salt dome, an anticlinal structure which occurs when a salt diapir is pushed up by the weight of overlying rocks.

The other theory is that it is an eroded impact crater left by a meteorite. In the 1990s, a team of geologists and seismologists from NASA and the University of Nevada at Reno performed a detailed study that included seismic refraction and rock mapping. The results of this study support the meteorite theory. 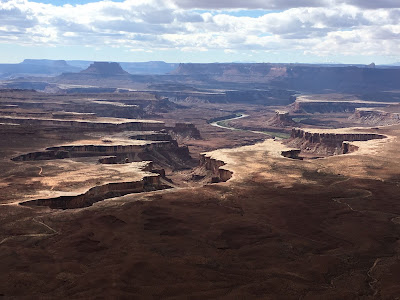 It is possible to hike into the canyons of Island in the Sky, but it is a long way down and a long way up. We decided that we had had enough hiking and just wanted to admire the view. 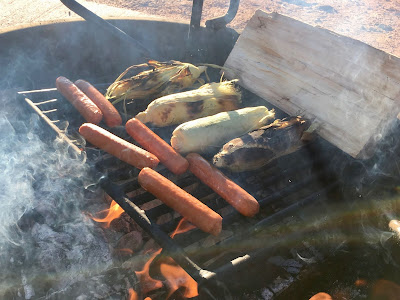 We returned to our campsite at Dead Horse and cooked a dinner over our campfire. This dinner was nothing fancy; just some sausage, corn and some mashed potatoes (not pictured) 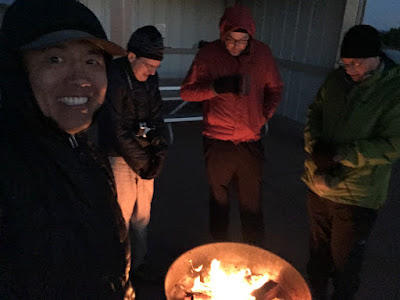 After dinner we gathered around the campfire and stoked the flame. It would be another cold night, so no of us stayed up late. We all retired to our respective sleeping bags to prepare for the cold. 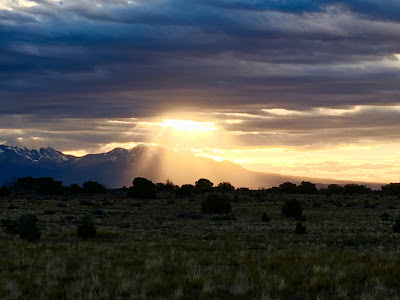 The dawn of a new day meant that our camping trip was coming to an end. 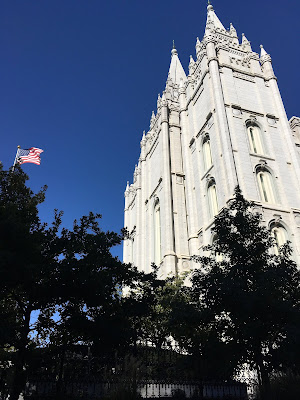 We drove into Moab to clean up and shower. Then we drove four hours to Salt Lake City. We still had some time to burn, so we decided to pass by the famous Mormon Tabernacle. We were allowed to walk around the grounds and enter many of the buildings, but we were not actually permitted to enter the Tabernacle because it is considered a temple. 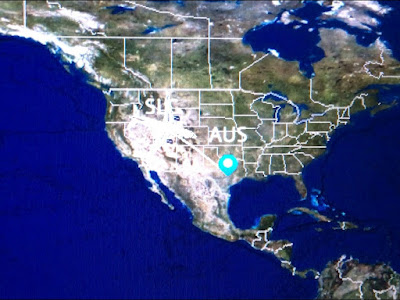 After a little sight seeing in Salt Lake City we boarded a plane and flew home.