Half Way to Havana - My Near Death Experience Part 2 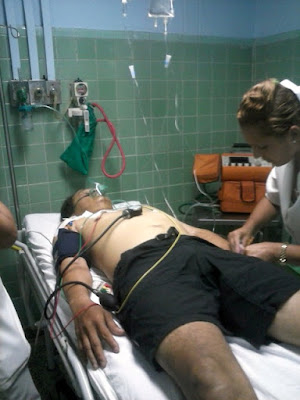 On the Emergency Room Operating Table
Photo taken by Jorge

Blood was rushing to my head. I was feeling a little nauseous from the vibrations of the ambulance ride. I remember being wheeled into the hospital on a stretcher.

There was a nurse walking beside the stretcher. She asked me what had happened. I turned to answer her… and immediately vomited. I don't really know if I vomited on the nurse or if I missed her. I apologized anyways.

I wiped some vomit off of my cheek and then started to convey my story once again. While I was being wheeled through the hospital I realized that I was in a hallway or more specifically on a walkway outside of the actual building. To the right side of me I could see palm trees in the patio area. I was thinking, "oh, that's kind of nice." Then I was thinking… Hmmm, I wonder what kind of hospital this might be.

I've been in a hospital in a developing country before. Once when I was motorcycling in Guatemala I crashed and separated my shoulder. I rode for one and a half hours to reach a city and a hospital. When I saw the doctor he put some tape on my shoulder, wrapped my arm in my own bandana and told me to rest it for two weeks. He didn't tell me that I had separated my shoulder. It wasn't the best of advice or healthcare. To this day I still have a separated shoulder.

I remember that the hospital in Guatemala had an open air type of architecture too. There were doors wide open. Hallways with breezes running through them. The rooms had windows that were open and sometimes without screens to keep the bugs out. In the US this might seem quite strange. Most hospitals in the US are enclosed, sterile and air conditioned. I speculate that in tropical climates that it is better to make the structures open to increase the air circulation.

I focused back on my current situation. I was trying to gauge my surroundings and take in the atmosphere of the hospital. I remember passing by many windows. Some of the rooms looked like patient rooms and some of the rooms looked like administration rooms with shelves and cabinets. I passed by a person lying on a stretcher by the side of the walkway. The man was groaning. There didn't seem to be anyone helping that person. I looked around me and realized that there were probably 3 or 4 people escorting me through the hospital. I felt empathy for the man lying on the stretcher all by himself. The nurse began hooking up a series of wires to me. She explained that these wires were to take an EKG (electrocardiogram). I knew what it was. I was kind of surprised that they called it the same thing in Spanish as in English… an EKG.

I turned to ask the nurse where they were taking me… and suddenly felt another round of projectile vomit launch from my mouth. The nurse jumped back and away. I heard her say "Dios Mio" (My God). I felt sorry for the nurse because she had to clean the vomit off my face and shirt. I decided that it would probably be better for me to keep quiet and just let these people do their job.

I was wheeled into the emergency room and was transferred on to another stretcher. Some technicians pulled some curtains around my stretcher to create a privacy wall. I could hear the person next to me yelling and he sounded in much worse condition than I. There was a flurry of activity. There was somebody taking my blood pressure, there was somebody stripping off my shirt, there was somebody emptying my pockets. And there was a group of people huddled together having a very animated discussion while passing a piece of paper amongst themselves. Jorge, the owner of the casa particular, was in the middle of the group.

The nurse with the EKG equipment appeared again and started connection electrodes to various parts of my body. I've had an EKG in the US and the electrodes were fastened to my body with little sticky pads. This EKG machine had suction cups and it kind of amused me.

When I was a kid I played racket ball with my friends. Once I split a racket ball open into two halves. The two halves made great suction cups. I took one of the suction cups and stuck it on my forehead. Then I ran around the house showing my family and acting like I'd been struck in the head with a racket ball. I thought that it was pretty funny. It was pretty funny when I finally took off the ball and learned that the suction had worked so well that it had created a perfect circle on my head by sucking the blood to the surface of my forehead. I had a circle on my forehead for about three days. I had to borrow some of my mother's makeup to cover up the circle. Funny how you think things like this when you are lying in an emergency room. I was wondering if the little EKG suction cups would leave little circles all over my body.

As the nurse was connecting me to the EKG machine. Somebody was asking me questions. I started to respond, but the only thing that came out of my mouth was some projectile vomit. This time I turned right and sprayed the nurse and the EKG wires. I could tell that she was pissed. I wanted so bad to tell her that it wasn't personal. I just could not control myself. She had to disconnect all the EKG electrodes and clean them.

A lady in a dark suit approached my left side. Maybe she had witnessed that my preference for spewing vomit was to the right, so she was playing it safe. She introduced herself as Barbara and that she worked in the International Section of the hospital. It was her job to look after all the international patients. I could tell from her uniform that she was not a medic, nurse, technician nor doctor. I assumed that she held more of an administrative or "government" role. I had a feeling by the way the other medical professionals interacted with Barbara that, while she spoke very gently with me, she held some real power. I conveyed my story to her. I added some parts explaining that I was legally in the country, that I had permission from the Treasury Department of the US Government to visit Cuba and that my passport and all my documents were in a pouch attached to the side of my hip. My security pouch was promptly removed and held for safe keeping.

I asked her what the group of people were discussing. She then signaled for a doctor to approach. The doctor approached and introduced himself as Dr. Pavel. He explained that they were monitoring my situation. He said that my vital signs were not regular. He said that it appears that I had become dehydrated which led to a blot clot which reached a blockage in my heart and cause a myocardial infarction - a heart attack!

He continued and said that there was a procedure that they wanted to conduct called a Thrombosis (Thrombolytic). He explained that for the Thrombolytic they would make a small incision near my collar bone into an artery, insert a tube, inflate the tube, then inject a strong anticoagulant to help dissolve the blood clot.

He said that someone needed to sign the piece of paper to authorize the procedure and guarantee payment for the cost of the medicine - $70. They were trying to get Jorge to sign the paper. I said that I had just met Jorge. He should not be under any obligation to authorize or pay for any of my medical expenses. I asked Dr. Pavel to allow me to read the authorization and I would guarantee payment for the drug.

I read through the authorization form and signed it. I thought that it was a worthwhile expenditure. ;)

Immediately the medical team went into action. They did a little prep work. Sterilized the surface of my skin near my shoulder. Gave me a local anesthetic. Then just as the doctor had explained, he made a little incision in my skin, inserted a tube, inflated the tube, then injected some liquid. The incision did not hurt at all, but when they injected the liquid into my artery it felt intense. I was awake throughout the procedure and able to talk to the doctor. After the procedure, the doctor sewed some stitches to close the incision. Then I fell asleep.

About two hours later I was awaken. The nurse was taking my vital signs. The doctor was asking me how I felt. I noticed a dramatic improvement. The nurse said that my vital signs were back to normal. I felt completely awake and aware. I was provided oxygen through a mask. There was an intravenous therapy connected to my shoulder. I believe that they were using the same incision from the operation. I felt alive… well pretty alive.

I was transferred out of the emergency room and into an intensive care room. Dr. Pavel told me that I would need to stay in the intensive care room for a few days for 24 hour observation. Barbara told me that once I was stabilized that I would be moved into the International Section of the hospital which would be a little more comfortable. I was just along for the ride. 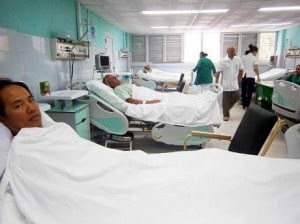 I found the whole experience very interesting. I mean really… How many foreigners, and especially US Citizens, get the opportunity to see the inside of a Cuban hospital? Moreover, How many people get to experience first hand the inner workings of the Cuban Healthcare System… and live to tell about it?

This is Part 2. Continue reading Part 3, I share my observations about spending a week in the Cuban Healthcare System.