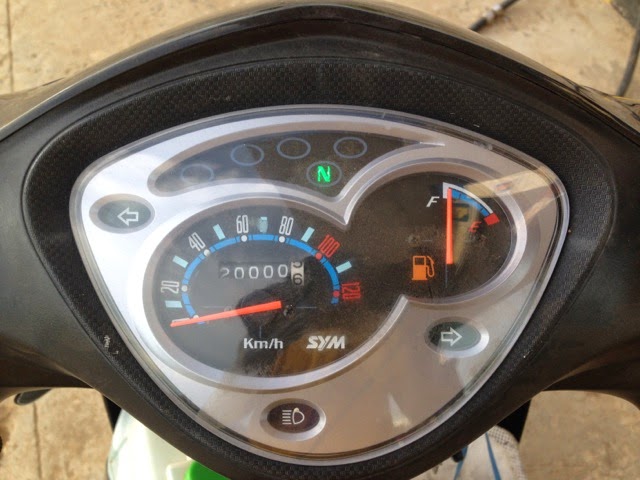 The great thing about motorcycle maintenance on the road is that I often ask if I can observe and assist with the diagnosis and repair… which means that I learn something new about motorcycles every time. I look at this as a positive and not a negative. Also, I enjoy the interaction with the people that I meet. It become less like a transaction and more like a cultural exchange.

The convenient thing about motorcycle maintenance in Vietnam is that there are usually one or many xe may shops (motorcycle shops) every few kilometers. So, I hopped on my motorcycle, traveled down the road and pulled into one such shop.

Like many of the shops in Vietnam, the store front was open and facing the road. This shop was actually spilling out onto the road. There were three guys hacking on motorcycles, there were tools and pieces of metal scattered on the floor, there were containers of old oil laying around and there were three of four motorcycles in various stages of repair or disrepair. I did not get warm fuzzies about the condition of the shop, but sometimes beggars cannot be chosers.

One of the young mechanics approached me and asked me what I needed. I said, "xin chao". This means "hello", but it also lets people know that I'm a foreigner, because Vietnamese people say hello differently. Then I said, "lam on" and pointed to my speedometer. This means "please", check out my speedometer.  The mechanic understood immediately. My Vietnamese language and pantomiming abilities were improving every day. 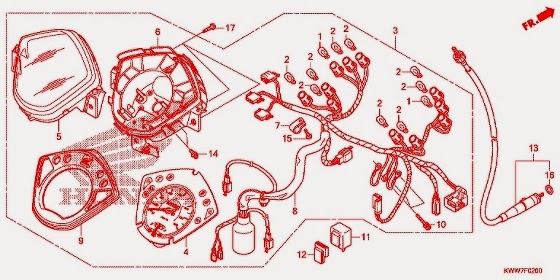 This is a schematic of my motorcycle's speedometer housing. There were a number of mechanical and electrical pieces that could have been broken. I have found that on the road mechanical pieces are usually pretty easy to fix, source, replace, weld, grind, bend or bang into usable condition. Electrical pieces are usually more difficult to fix, source and repair.  I was hoping that the problem was not with the speedometer housing. 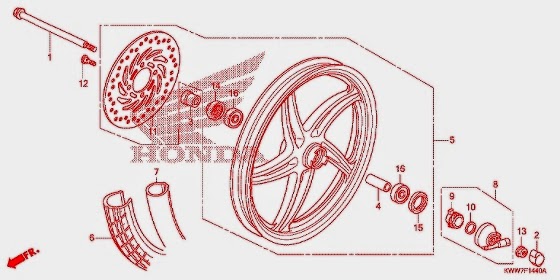 This is a schematic of my motorcycle's front wheel. It might look complicated, but I was actually surprised by its simplicity and how few pieces where involved in the entire wheel hub. The speedometer measures speed via a connection to the front wheel hub (see parts 8,9,10). When the wheel spins, part 10 rotates with it. When part 10 spins around, it turns a cable that is connected to the speedometer. The speedometer measures the revolutions of the cable and in turn displays the speed.

The mechanic removed my wheel and manually spun the speedometer cable. The speedometer needle moved. Thus, we deduced that the problem was not in the speedometer housing, but that the problem was in the wheel hub. There were really only three pieces within the wheel hub that related to the speedometer. We examined all three pieces and they appeared to be in reasonable condition. There was one piece that was a little bent, part 10. We carefully repacked the wheel hub to see if it was just a misalignment or misconnection. We ran a test and the speedometer moved for a while, but then stopped working again. We disassembled and reassembled the wheel hub again. Same result. I inquired if he had a spare part to replace the bent part. He did not. Then a second mechanic approached us and started to disassemble the speedometer housing. I was a little concerned because to gain access to the speedometer we had to remove the whole front fairing, mirrors, light, brackets, etc. After running a few tests, we all concluded that the problem was with part 10. Unfortunately the shop did not have the spare part, nor did the mechanics have an idea of how to fix the issue. This whole procedure took maybe one hour. I was a little disappointed that we were not able to fix the problem, but I was happy that we had at least diagnosed the problem. I asked him how much I owed him for his time. He shook his head, "no" or "nothing". I thanked him and paid him 20,000 dong or US$1 for his time. I figured he could at least buy a beer or a drink. The mechanic was reluctant to take the money, but I forced it upon him and he eventually accepted it.

I still wanted to fix my speedometer, so I traveled down the street to find another xe may shop.

I came upon another shop that was open and sparkling. It was so clean, that I thought that perhaps it was new and still not open to the public. There were tools in tool chests, parts on shelves, spare oil for sale, an actual motorcycle lift and the floor was spotless. I crossed my fingers and hoped for the best. The strange thing was that there was nobody in sight. I looked around and shouted, "xin chao!" I repeated this a few times. As I was about to leave, a man approached on his motorcycle and said "hello, can I help you?" At least I was guessing that is what he was saying. 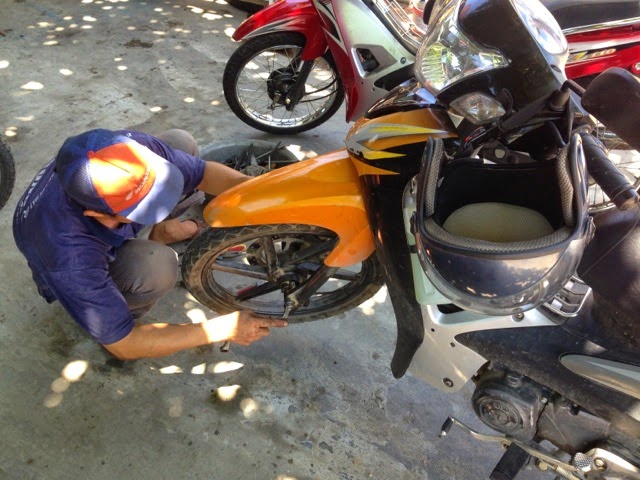 I went through my routine… xin chao… lam on… point to the speedometer. He looked at me, smiled, then nodded his head that he understood. He walked up to my moto and spun the wheel. I pointed to the speedometer, then to the wheel hub. He understood perfectly. I motioned if I should move my motorcycle into the shop. He shook his head... No. I left my motorcycle where I had parked it. He pulled out his wrench and removed the wheel. I pointed to the part that was bent, part 10. He looked at the part, then walked into his shop. I thought, "Yes, he has the part!". He returned with a pair a pliers. He took the pliers and bend the piece back into shape. He then placed the part back on the hub. It did not fit perfectly, so he removed it and bent the part so that it would fit better. He then reassembled the wheel hub and tested it. It seemed to work. Yes!!! He then reassembled the entire wheel and reattached it to my motorcycle. The whole process took maybe 5 minutes. 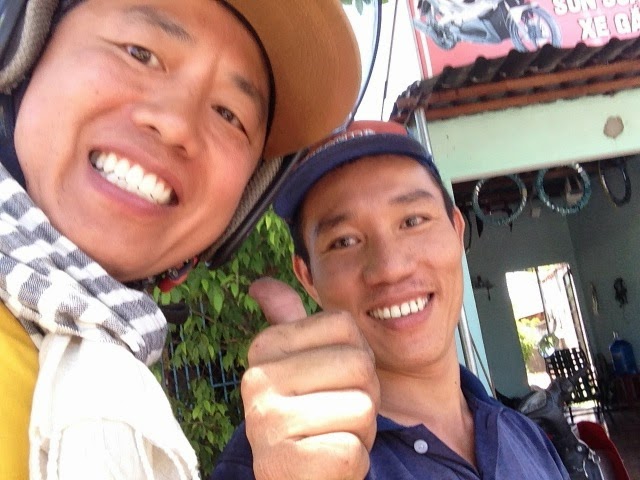 I did a little test ride to confirm that everything was functioning properly. All seemed to be working fine. I inquired how much I owed him. He said, 30,000 dong. I paid the man. Best US$1.50 I ever spent for a motorcycle repair. Once again… clean shop = good mechanic = good service.

I got back on my motorcycle and headed down the road. The adventure would continue...
By Troy - September 26, 2014