This adventure started somewhat haphazardly and spontaneously. In March, our springtime, I was thinking of what I should do during the summer. The Summers in Texas can be brutally hot, ranging from 95 to 105 degrees Farenheit (35 to 40 Celcius). I'm a native Texan so I can tolerate the heat. But then I thought that it might be nice to escape the heat and try a change of scenery. As time pased, nothing really materialized, the spring crept into summer, and I really didn't have anything lined up. But then there was a catalyst. 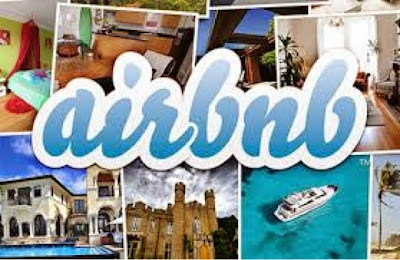 I periodically rent out my guest room or entire house on airbnb.com to earn a little extra travel money. About four weeks ago I received an inquire about renting my house for a weekend from a nice couple that were planning to visit Austin to evaluate if they wanted to move to the city. It just so happened that the particular weekend that they requested my place wasn't available, but I mentioned to them that I might consider renting my house out during the summer. Well, one thing led to another and we eventually agreed upon a time period and price that would work for both of us. But since I rented out my house... now I really needed a place to live.

I quickly came up with a short list of possibilities... Western America, Eastern Europe, The Baltics, South East Asia, East Asia and The 'Stan's. I actually had one friend invite me to join her and a group on a tour of North Korea. It sounded interesting, but it didn't come together in time for various reasons. I put out some feelers about Europe and it just didn't feel like it was the right time or place.

So about three weeks ago one of my other friends sent me a message that he was quitting his job and was interested in traveling. He dropped a few suggestions of places he wanted to visit and we both just gravitated toward South East Asia (SEA). So two weeks ago I booked a flight using airline mileage, and now the adventure begins... SEA to shining SEA.

With only two weeks to plan this trip, I decided that it would not really be worth the anxiety to plan it. I just decided that I would go quick, go light, pick up things along the way and simply have a flexible budget to make it happen.  I'll write a post about what gear I'm taking later. 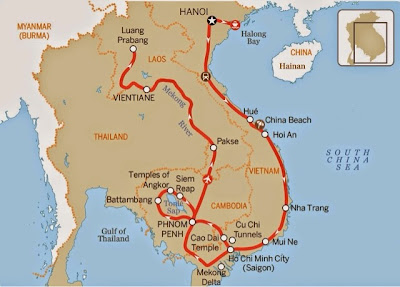 I did find this map online and the route looks like a good meandering line to follow.

So yesterday was the day... 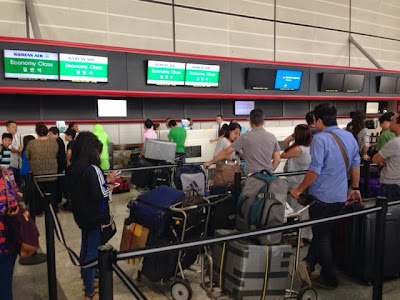 I departed out of Houston. The airline that I would be flying was Korean Airlines. 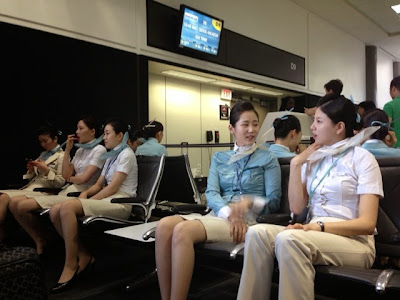 At the boarding area I sat down next to a group of the flight attendants. All of them were very pretty, dressed in uniforms, wore pastel colors, had the same hair styles and honestly it reminded me of what it must have been like to fly in the golden era of airline travel. One of the attendants mentioned to me that the direct flight to Seoul, Korea was a new route and the plane was new too. 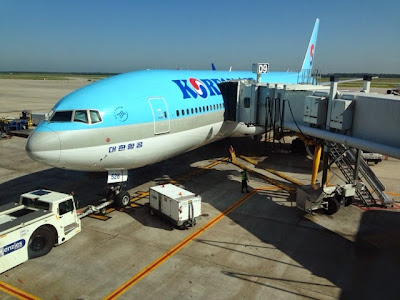 Even the plane was dressed in pastel blue. 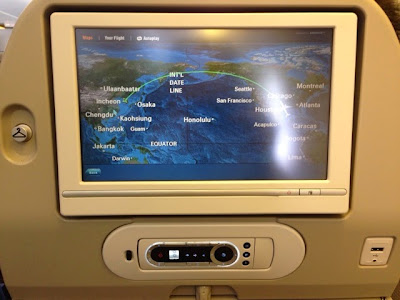 The plane did appear to be new on the inside. The first class had fully reclining beds, the business class had reclining chairs and the economy class where I was sitting... well we had this private entertainment system. It did have some nice amenities like a little knob to hang a piece of clothing or purse. And it had a USB port to charge electronics. 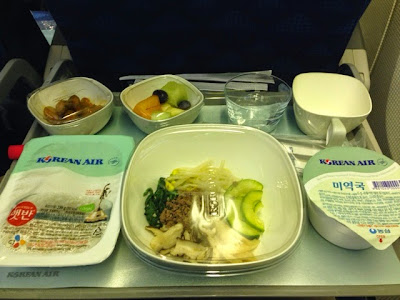 The food was pretty unique. They offered me a choice of beef with rice, chicken with potatoes or a Korean meal of bibimbap. I chose the bibimbap. 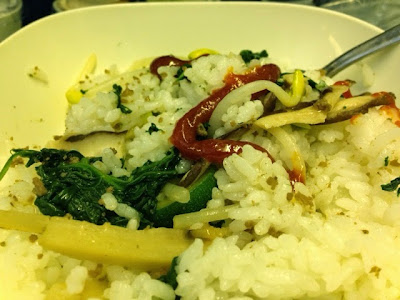 Korean bibimbap consist of beef, vegetables like mushrooms, greens, bean sprouts, rice and of course I had to add the hot chili paste. It was not the best bibimbap that I have eaten, but it was a nice change from the regular airline meal. 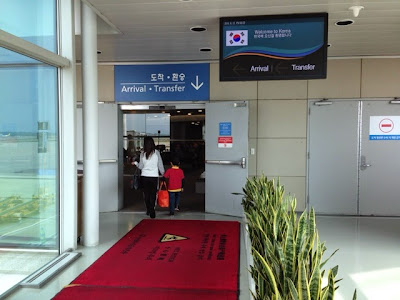 I landed in Seoul, Korea some 14+ hours later. 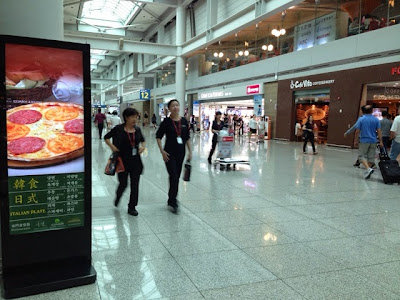 The Seoul airport was like most other modern airports. They did seem to have an abundance of electronic displays. 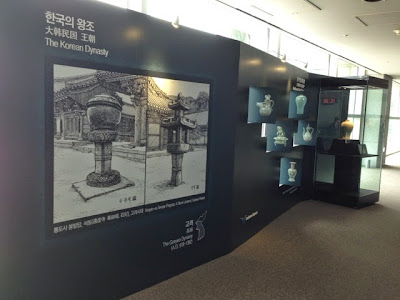 They also had this nice display about Korean art. 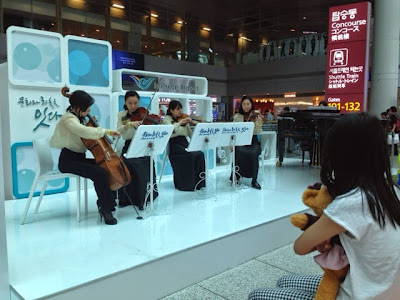 There was a string quartet playing orchestral music. 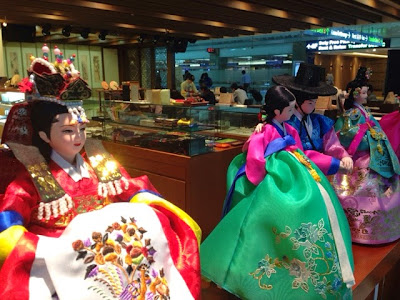 And there was this cool Korean Cultural Experience Center where people waiting for their flights could learn, interact and practice some traditional arts of Korea. 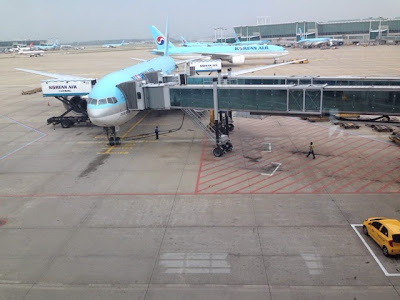 I was just connecting in Seoul to my final destination and after about three hours of waiting it was time to board a second plane. 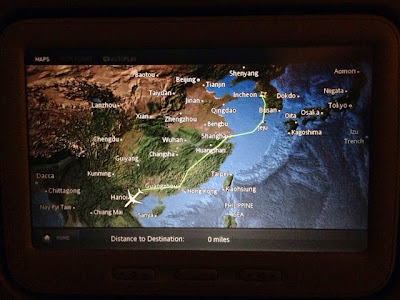 My destination was Hanoi, Vietnam. 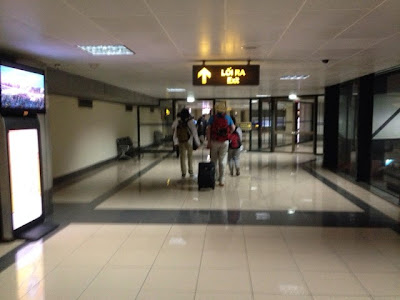 Once I landed in Hanoi I walked through the terminal. I bypassed baggage claim because all I had was a carry-on backpack. 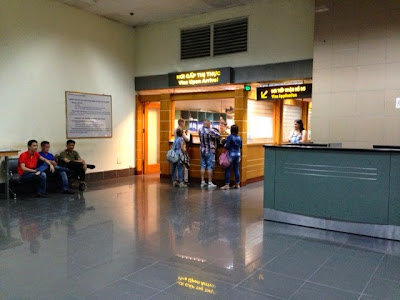 I had purchased a special Visa in Advance letter that allowed me to pick up a visa upon my arrival. It was super easy to do. I basically went to this website a few days in advance, filled out a form, paid a fee of $25, then 24 hours later they sent me a invitation letter that would allow me to buy a proper visa. I proceeded to this desk to the left of the immigration area and turned in my letter with a passport photo. 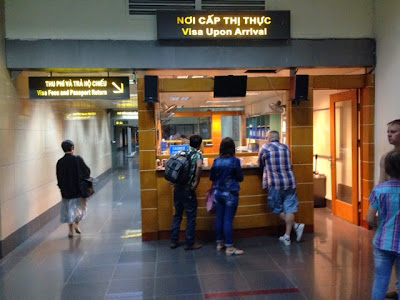 Then I walked around the corner to this station where I paid $45. And after about five minutes I received my stamped visa. Right after I took this photo a military guard told me that I could not take photos in this area. 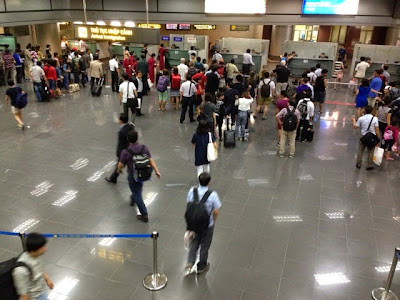 I still had to wait about ten minutes in line to pass through immigration. It was fast and efficient. 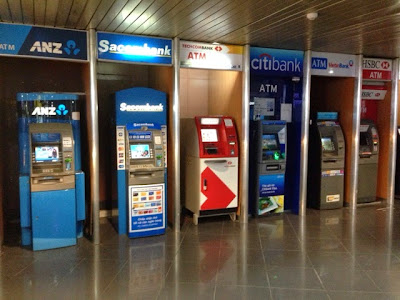 Once through immigration, I bypassed customs because I did not have anything to declare. I did stop off at this row of ATM machines to pick up some local currency... the dong. 20,000 dong = US$ 1. 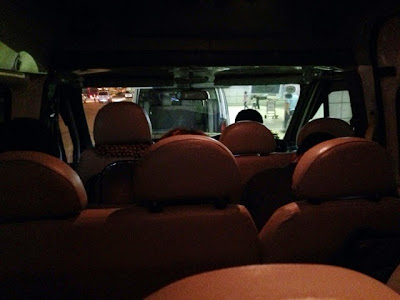