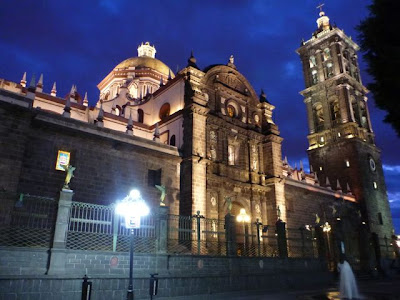 I traveled to Puebla after spending a few days in Xalapa. This is what the sky looked like when I arrived. The photo is unedited.

The ride to Puebla was straight, then mountainous, then foggy, then rainy. I don't like to ride in the rain, much less fog, so I took a break at a roadside stand and ate a jamon y queso pastre (ham and cheese pastry) that under normal circumstances I wouldn't touch. I asked the señorita to nuke it in a microwave in the hope that it would kill any bacteria. I said a little prayer putting God to the test that he would protect me and my stomach from all that was bad. He seemed to be protecting me from my own foolishness. I rode on and on... then the weather cleared up. It ended up being a beautiful sunny day and about 80 degrees. As I neared the city my spirits were lifted by the sun and my clothes had been blown dry by the warm air.

Puebla is definitely not off the beaten path, but it is significant to the founding of Mexico and has some amazing historical sites and architecture. I thought that I should check it out.

I arrived into Puebla at about 6pm and pulled up to one of the first hostels that I could find that appeared to have a parking garage. It was called Hostel Santo Domingo. The staff were really friendly and let me park my bike in the back. The hotel was only about two blocks from the zocolo (central plaza) and main shopping area. 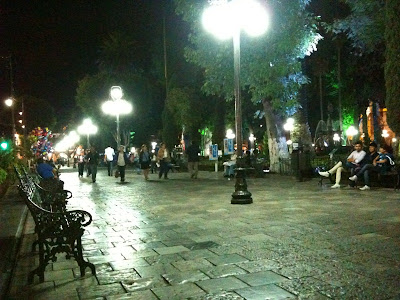 I really didn't do much during the first night other than walk around the plaza and have a big naranjada (orangeade) and a cemeta (Mexican hamburger).

I went back to the hotel, watched a little Mexican tv and fell asleep.