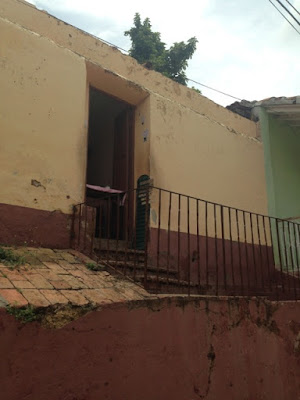 After an interesting first day and evening in Trinidad, I slept well. I decided to forgo the breakfast offered in my casa particular. Instead I wanted to walk around the streets and see what I could find. There was the normal hustle and bustle of people going to work, kids going to school… and then I saw a line forming at this doorway. There are bad lines and good lines. This appeared to be a good line. There were about 10 people winding their way up this small staircase waiting for something being distributed through the doorway. It stuck me as a little strange, because the venue did not look like your typical Cuban ration store or dispensary - it looked like a house. I observed as person after person would patiently wait, pay some money, then walk away with a little morsel in their hand. 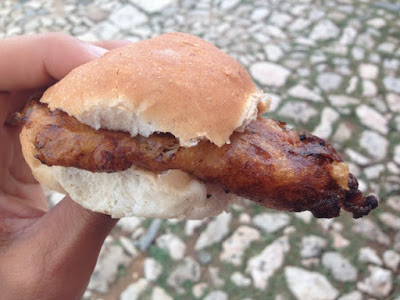 This is what the people were walking away with… a fish sandwich. Sometimes it is advisable to follow the wisdom of the crowd. So I patiently waited my turn. One of the locals behind me in line seemed a little perturbed that a tourist was invading his favorite breakfast spot. I just ignored him. I waited like everyone else, paid my money (10 Pesos), then after a minute or two was given this tasty treat. The bread was soft and tender. The fish was crisply deep fried. The proprietor sprinkled a little of her secret sauce on top. It was like a hot juicy tasty explosion going off in my mouth. After devouring my first fish sandwich, I returned for a second. Luckily by this time the line had subsided. 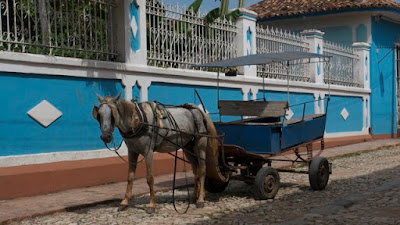 There were a number of local taxis to shuttle one around the town, but I opted to walk. 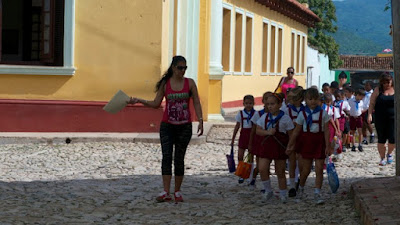 While walking, I spotted this teacher leading a group of students orderly through the streets. 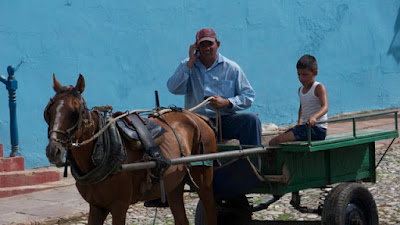 When modern technology and antiquated technology mix. A father and son set off to work. 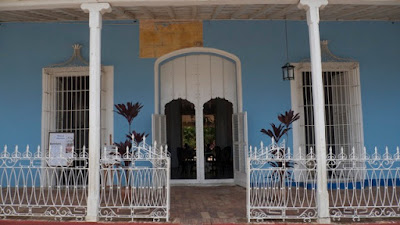 Trinidad had a number of museums located around the Plaza Mayor. I'm not sure if they were developed to document and preserve art and history or make a buck off of the tourists. Most of them charged a few CUCs or $s to enter. 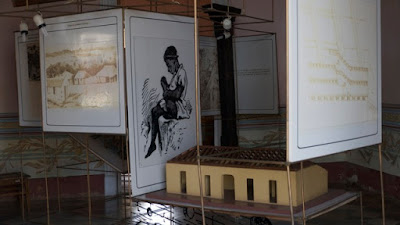 This museum was the Museum of Colonial Architecture. It contained a number of displays about some of the significant buildings that were built and preserved around the city. 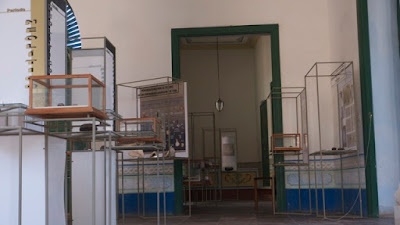 Inside there were mostly photos, drawings and a few architectural models. 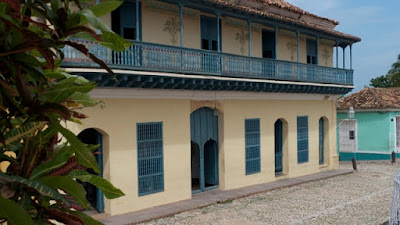 This museum was called the Romance Museum. I asked around what was inside. I let me imagination run wild and thought that perhaps the museum contained some artifacts from a mysterious wild romantic relationship. 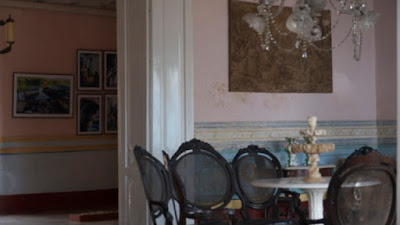 What I found out was that the house was once owned by a sugar baron named Nicholas Brunet. The items inside the house did not really belong to the baron's nor to his family, rather they were gathered from around the country and assembled into a collection. Thus, I was a little skeptical if this was truly a museum to preserve some history or make some money. There were a few rooms that displayed classical colonial style furniture and furnishings. Some were authentic and some were reproductions. Sometimes in Cuba it is hard to tell the difference between what is real and what has been reconstructed. 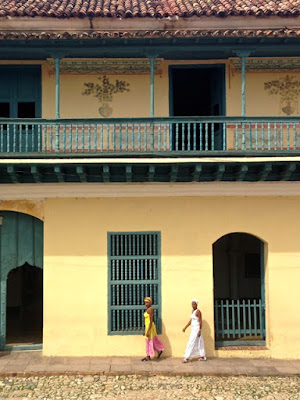 I thought the most striking thing about this museum was when these two tall thin elegant ladies, one dressed in bright colors and one dressed in all white, walked in front of the canary yellow colored building. 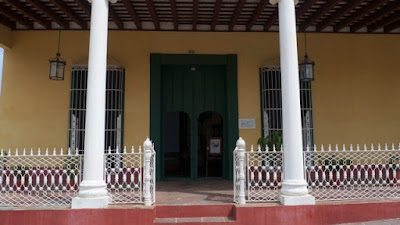 There were other museums like the Galeria de Arte Universal that took a different approach. 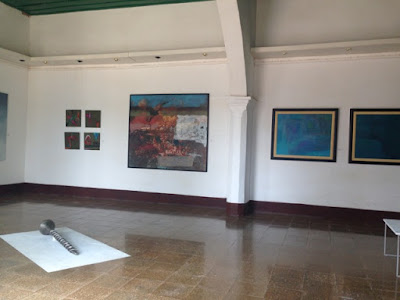 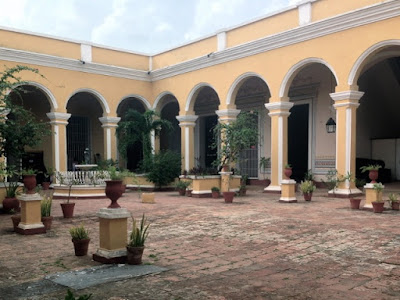 One of the more interesting museums that I saw was the Palacio Cantero. It was one of the largest and most impressive of the houses surrounding the Plaza Mayor. The house is now used as the Municipal History Museum (Museo de Historia Municipal) which details the history of Trinidad. 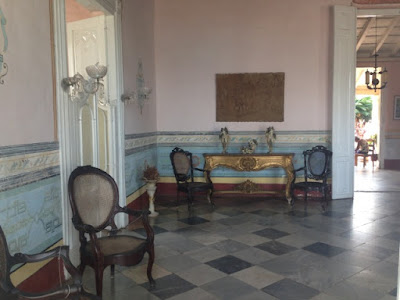 Grander than most buildings nearby, it featured a spacious entrance hall that opened on to a large galleried courtyard. 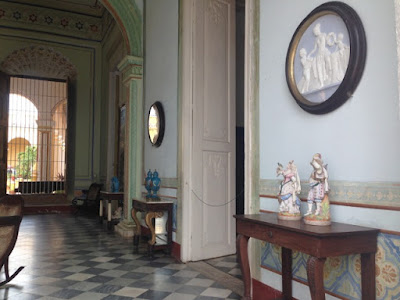 Original frescoes survived on the plasterwork of the main hall. 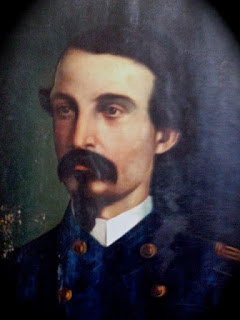 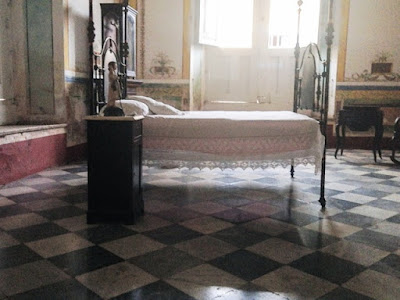 In 1842 Justo German Cantero y Owar-Anderson, a local doctor, married Pedro Iznaga's widow, Maria Monserrate, and it was the home of the Cantero/Fernandez de Lara family until the late 19th century. 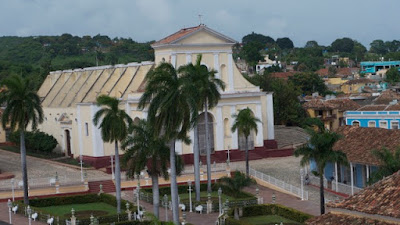 Accessible from the courtyard, there was a narrow staircase that led up a tower that provided good views over the Plaza Mayor. 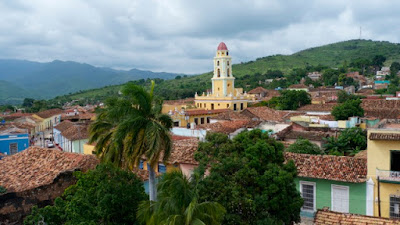 One could almost see the entirety of Trinidad. 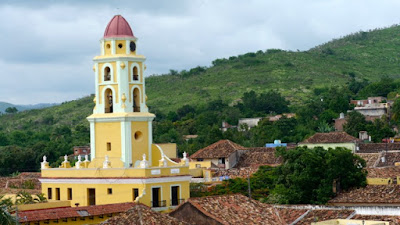 From this vantage point, there was a clear view the Convento de San Francisco de Asis. Built in 1813 by Franciscan monks, the building became a parish church in 1848, and in 1895 was converted into a garrison for Spanish troops. The church fell into disrepair, and in 1920 much of it was demolished, leaving only the bell tower and a few nearby buildings. 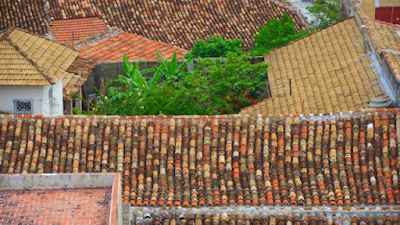 The rooftops of the neighboring houses formed a patchwork of colors and textures. 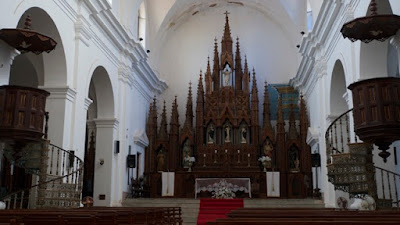 Above the plaza to the north-east stands the Iglesia Parroquial de la Santísima Trinidad (Church of the Holy Trinity). Construction began on the current church in the late 19th century and it was completed in 1892. It was built on the site of a previous 17th-century church that was destroyed during the 19th century by a cyclone which damaged a great many buildings in Trinidad. 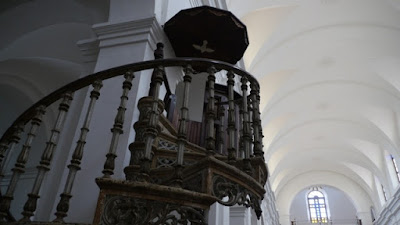 The church contains an 18th-century wooden statue of Christ, El Señor de la Vera Cruz (The Lord of the True Cross) which is an object of particular reverence in Trinidad. Originally destined for a church in Veracruz in Mexico, the ship carrying the statue was driven back to Trinidad three times by bad weather and was only able to make the journey after abandoning part of its cargo which included the statue of Christ. This was taken as divine intervention by the local population and the statue has been housed in the church ever since. 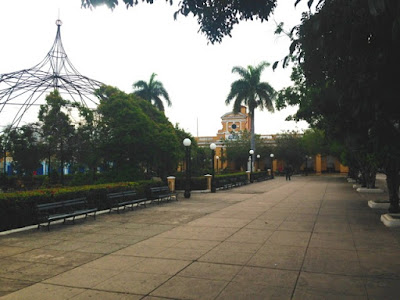 I wandered a bit and found the Parque Central Cespedes. This park seemed to have more locals and fewer tourists. There were a number of benches surrounding the park and I found it a great area to people watch. It also happened to be the only place in the city with wifi internet. So I sat watching people walking by and trying to load posts for my blog. One blog post with text and images might take 15 minutes to post and cost me about $3-4 in internet time. 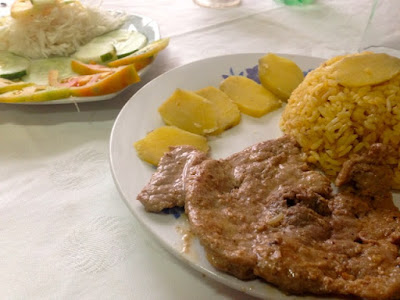 Just off the Parque Central Cespedes I found a little restaurant that offered hearty meals and charged local prices. The meal included a slice of pork, seasoned rice, congri (cabbage), cucumbers and tomatoes for the whopping price of 40 Pesos ($1.50). I had a nice dinner then retired to my casa particular for the evening.