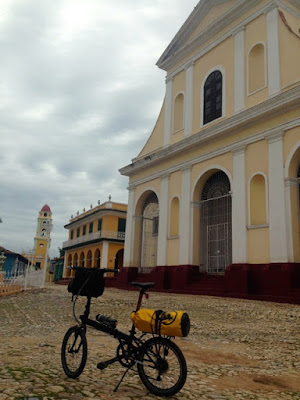 I landed in Trinidad a little past mid day. Honestly, I was excited.

I had seen photos of the city and heard rumors about the city. By all accounts the city was considered by many to be one of the most beautiful cities in Cuba. 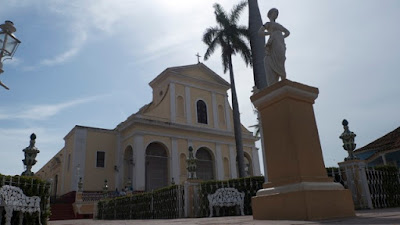 At the center of town there was the Plaza Major (Central Park). Standing in front of the park was the Iglesia Parroquial Mayor del Espiritu Santo (Church of the Holy Spirit). 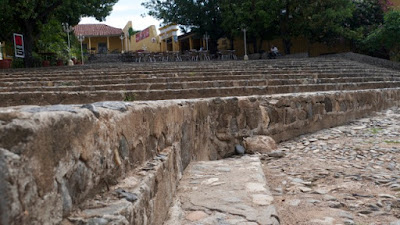 To the right of the cathedral there is a rustic looking sprawling staircase made of cobblestones that bent like a giant V. It formed somewhat of an amphitheater. 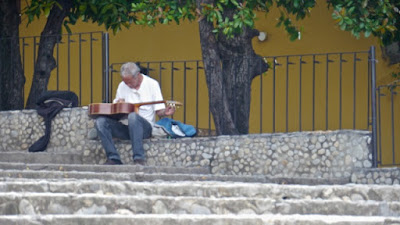 At one edge of the staircase I saw this gentleman tuning his guitar. 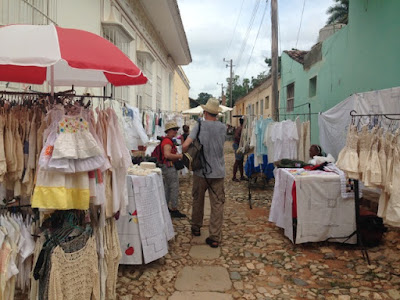 A few blocks off of the Plaza Major there was an outdoor market selling textiles. It appeared to me that this little street market was primarily set up for tourists. They were not quoting prices in Pesos, but rather in CUC. 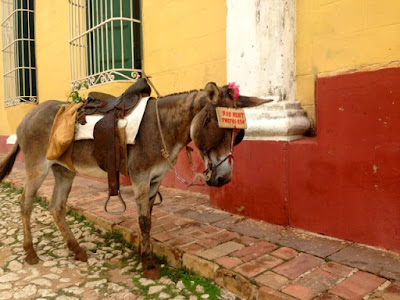 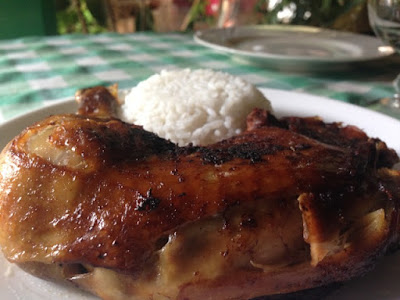 For dinner I decided to try the cooking at my casa particular. In Cuba, many casa particulars offer meals that range in price of $3 for a breakfast of eggs, bread and fruit to $15 for a dinner of lobster and sides. I asked for a reasonable meal of chicken, rice and vegetables. It cost me around $8. 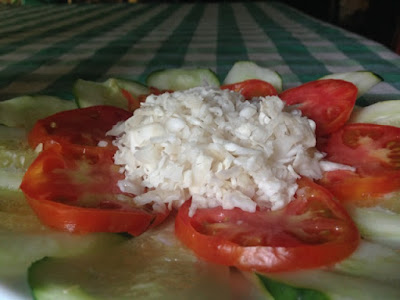 When you ask for vegetables in Cuba you will likely be offered cucumbers, tomatoes, cabbage and onions. At various places I asked what vegetables they had available and I was always offered the same thing. Many times it was just cucumbers. 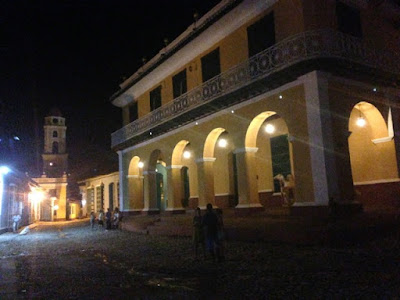 After dinner I decide to walk around the Plaza Major to see what the night life was like. It seemed like the main activity centered around the staircase. 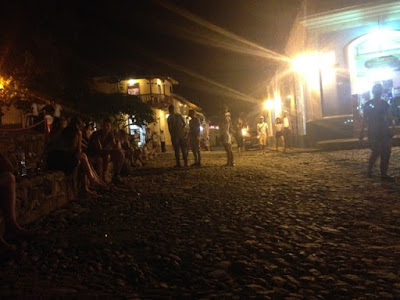 At the top of the staircase there was a restaurant with outdoor seating. There was a Cuban band playing some Trova and Salsa. It seemed like most of the clientele at the restaurant were tourists traveling in packaged tours. The prices were in CUC and it appeared that most of the meals cost 15 to 30 CUC. At the base of the staircase there was a variety of different tourists. There were mostly Europeans, some Latin Americans and a few North Americans who were probably Canadian. I believe that they were mostly traveling independently and in smaller numbers of 1 to 4 people.

The scene was pretty relaxing. Everyone seemed to be enjoying listening to the music in the background and watching people pass by. The locals were passing by on the way home to their families after a day of work. The tourists were passing by strolling around the plaza.

I did forget to mention that when I first walked by the church on my way to the staircase I was solicited.

There were two women standing in the shadow of church holding what appeared to be rolls of paper. One woman spoke to me from about 10 feet away and asked if I was looking for a restaurant. I politely turned to her and said "No, gracias. Ya comi" or "No, thanks. I've already eaten."

Hearing that I spoke Spanish, she then approached to within a few feet of me and more softly inquired "Quiere una mujer?" or "Do you want a woman?"  I wasn't quite sure that I had heard her correctly and I scanned my surroundings quickly to assess the situation.  I replied. "Que?"

I looked more closely at her and at her friend. She was holding a restaurant menu in her hand, but she was clutching like a rolled up newspaper. The two women were dressed rather plainly in jeans and tshirts. I looked around to see if there were any other people or perhaps pimps standing around. There were not. However, no more than 20 feet away there were two police officers talking to each other. I quickly assessed that I wasn't in any immediate danger, but that perhaps this could be a proposition, set up or sting. The woman approached me even closer, wrapped her arm around my arm and whispered softely, "Quiere una mujer?" I heard her correctly this time. I replied, "No, gracias." and continued on with my stroll.

Sex tourism in Cuba is for real. The story that I conveyed above was just one encounter that I experienced. I was propositioned a number of times. I also met some international sex tourists. I'll convey some of these stories in the future.

Anyways, Trinidad was an interesting place. The city does hold some historical significance. However, what I found interesting was that, more than any other place I visited in Cuba, Trinidad provided me insight into the near future of Cuba. The mix of colonial history with communist rule with modern tourism was creating a complex culture. I'm not sure if I liked what I saw developing.