I felt like I had seen all the museums, parks, markets and tourist attractions that I wanted to see in Trinidad.

Honestly, I was getting tired of being approached on the streets by Jineteros (hustlers) encouraging me to buy things, eat things or take a tour. The Jineteros can be helpful if you are looking for accommodation, a restaurant, a tour, a souvenir or just about anything really. However, they can be overbearing at times. Some are polite. Some are very persistent. Some are pushy. And if a Jinetero introduces you to anyone, anyplace or anything there is a built in commission that increases the price for the consumer - you. I was finding it disheartening to engage in normal conversations with the locals because at some point in the conversation a "pitch" would eventually be put forward.

Jinetero, "How do you like the Cuban food?"
Me, "I've only tried a few dishes so far."
Jinetero, "Have you tried lobster?"
Me, "I've eaten lobster, but I have not eaten it here yet."
Jinetero, "My aunt has a very good restaurant, I will take you there."
Me, "Hmmm"

The requests seem to go on and on.

The reality is that necessity is the mother of invention. Because the political system and economy can not produce many things, people have relied on relationships and a barter system to coexist and survive. This system has been transplanted into the tourism market. There is a legitimate scarcity of many things and those with knowledge of or access to goods and services often expect some form of compensation for their expertise. 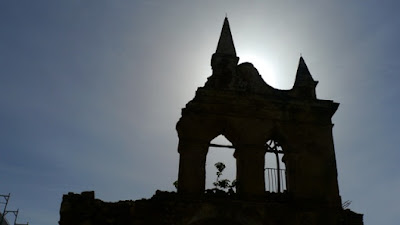 On this day I decided that I'd take it easy and check out a lesser known site outside the town center called Ermita de Nuestra Señora de la Candelaria de la Popa (Chapel of Our Lady of Candelaria). I walked past the Cathedral, down an alley, up a hill, through a neighborhood. I got a little lost and had to ask for directions. Then I stumbled upon this structure. 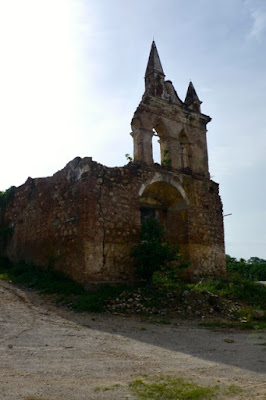 The Chapel dates back to the colonial era and was constructed in 1716. It was modeled after a similar chapel in Cartegena, Colombia because the two cities conducted trade. 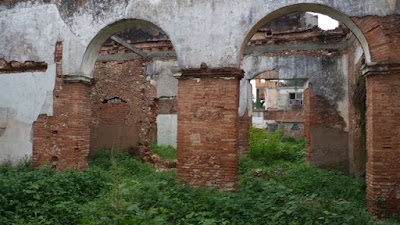 In 1812 the chapel was hit by a hurricane and sustained some damage. In the late nineteenth century the hospital attached to the chapel was used as headquarters of the US occupation army, between 1898 and 1902. In 1984 there were efforts to restore the chapel, but the efforts were not sustained. To the side of the chapel there was some new construction. I asked a local what was being built and I was told that it was a new hotel. The view of the city was nice from this vantage point. 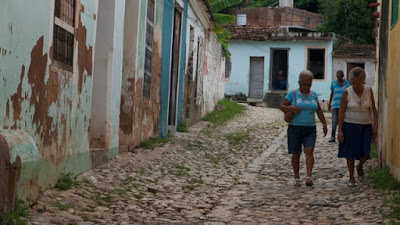 I returned to the city center, found a stoop to sit on and decided to do a little people watching. 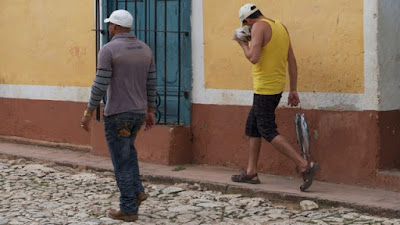 Bringing home the catch of the day. 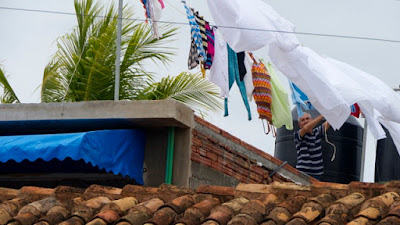 Drying the laundry on a rooftop patio. 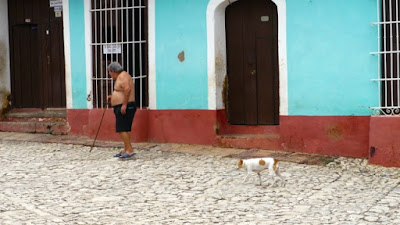 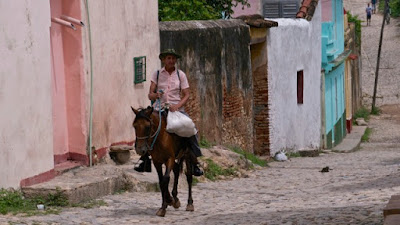 A man and a horse going to work. 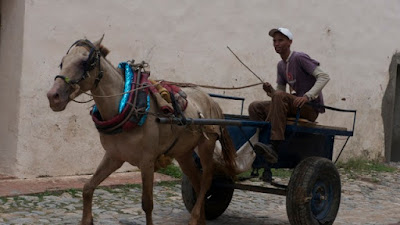 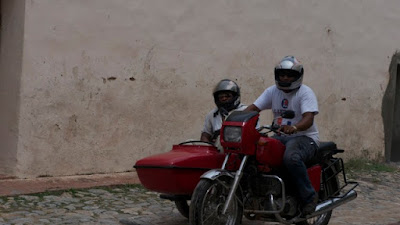 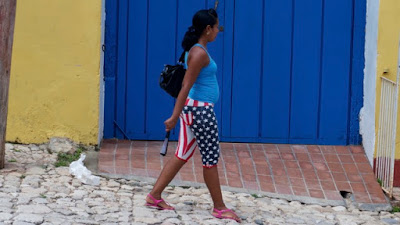 Sporting the stars and stripes 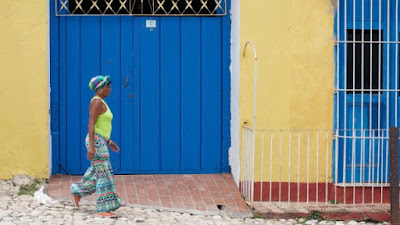 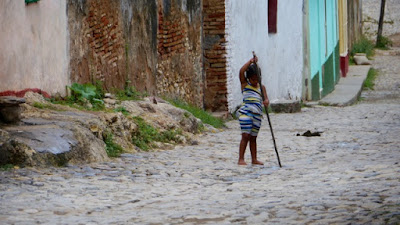 Playing with a stick in the street. 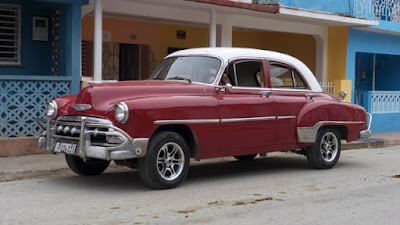 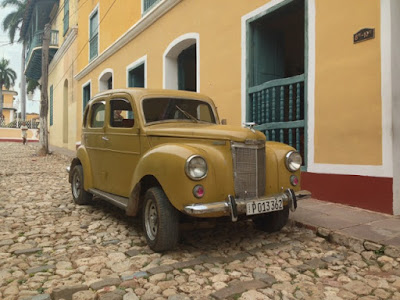 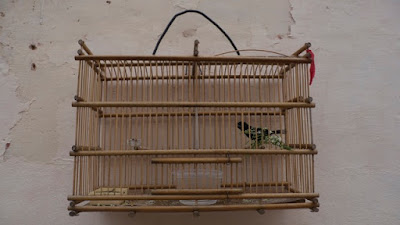 Black song bird in a cage against a white wall. 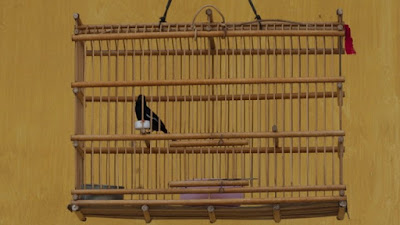 Black song bird in a cage against a yellow wall. 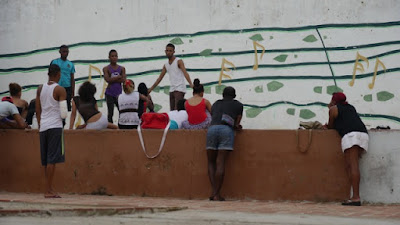 I walked into the Casa de Cultura (House of Culture) to see if there were any events occurring over the next few days. Inside the building in an open air patio there was a stage with a number of young people practicing a dance performance. I sat down and watched them for a while. After some time passed the gentleman with the red shirt sitting in the chair got out of his chair and approached me. He introduced himself as the head instructor.

Instructor, "Where are you from?"
Me, "Texas"
Instructor, "But you look Chinese or Japanese to me."
Me, "My ancestors are from China, but I was born in the US."
Instructor, "We see many Europeans and Canadian, but not many people from the US."
Me, "Yes, I'm traveling independently."
Instructor, "Are you enjoying Cuba?'
Me, "Yes, I've enjoyed most of the places that I've visited."
Instructor, "These are my students. That man over there is my assistant. They are practicing dance."
Me, "Looks interesting. Are they preparing for a performance?"
Instructor, "No."
Instructor, "Can I have a drink of your juice?"

I was carrying a bottle of juice that I had just purchased at the grocery store. I passed him the bottle. He drank about half the bottle and handed it back to me.

The Instructor walked up to his students and told them in Spanish, "No me dio nada, ni un centavo."

I walked out of the Casa de Cultura with a new lesson in culture.

Back on the streets, I decided that I was finished having conversations for the day. I resigned to be an observer. 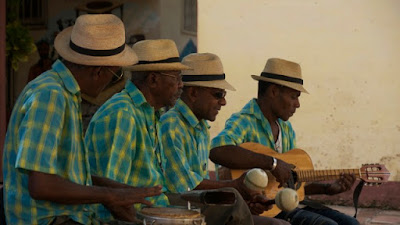 I caught this group of musicians playing trova music in a small park. 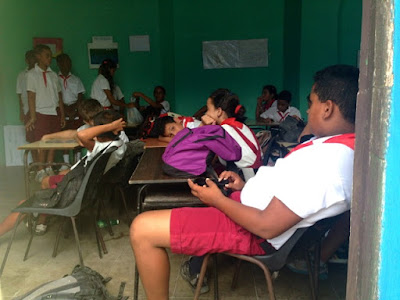 I walked by a school with the classroom door open. The students looked about as interested in their studies as students anywhere. 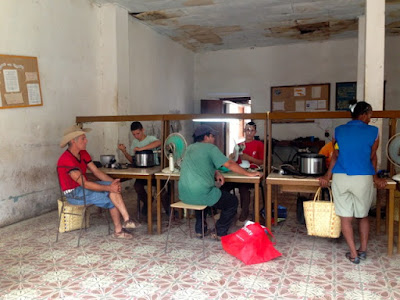 This establishment was a repair shop. Bring in a toaster, radio or any home appliance and one of these gentlemen would repair it for you while you wait. 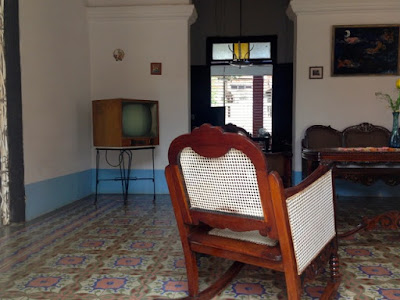 A glance through the window of a Cuban house revealed some vintage 1950s furnishing still in pristine condition. 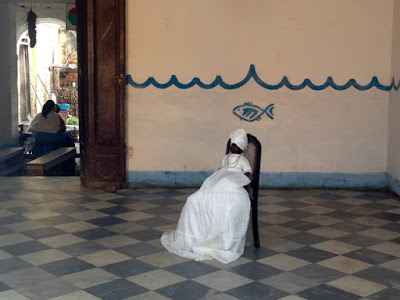 I passed by the open doorway of this house and had to double back for a second look. I had stumbled upon Regla de Ocho also known as the Casa Templo de Santería Yemayá… a temple of Santería.

Santería is a system of beliefs that merges Yoruba slave mythology with Christianity and Indigenous American traditions. Santería involves various religious customs, including a trance, animal sacrifice, sacred drumming and spiritual dance. The doll dressed in white is Yemayá - a goddess of the sea. Traditionally she wears a long flowing dress, cinched by a wide belt, with a full skirt made of blue and white ruffles, which represent the waves in the ocean. As a mother, she's wise and virtuous, but she likes to have a good time and she enjoys dancing. Although she's maternal and nurturing, she's also fierce. She's fair minded and forgiving when proper remorse is shown, but her punishments can be terrible when she's outraged.

I didn't want to upset Yemayá or disrupt my day so I continued on with my walk. 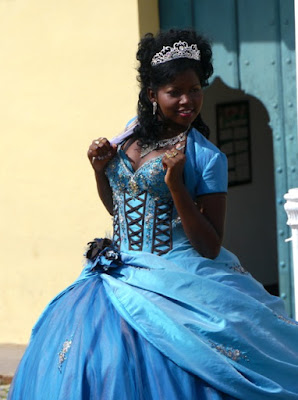 Of a gentler nature, while walking by the Plaza Mayor, I saw this young girl having her photo taken and dressed like a princess. I'm guessing that she was about to celebrate her quinceañera. A quinceañera, also called fiesta de quince años, is a celebration of a girl's fifteenth birthday in parts of Latin America. This birthday is celebrated differently from any other as it marks the transition from childhood to young womanhood. 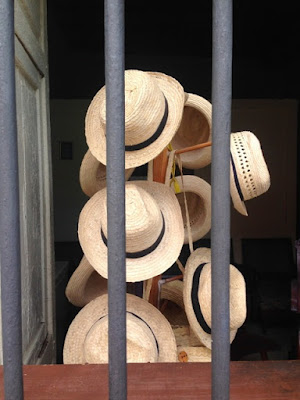 Still more placid, a collection of straw hats hanging on a rack inside of a window. 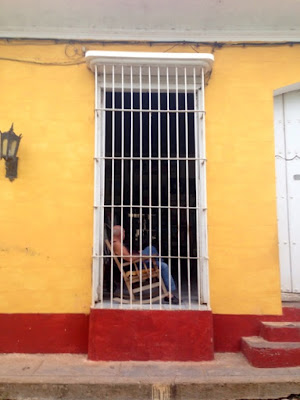