Baracoa to Imias - Over La Farola 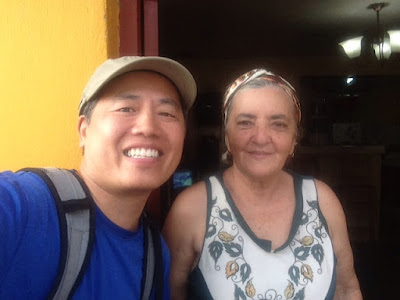 In Cuba there are hotels, but it is also very common for travelers to stay at casa particulares, Cuban versions of a B&B (bed and breakfast). This is the mama of the casa particular at which I stayed in Baracoa. 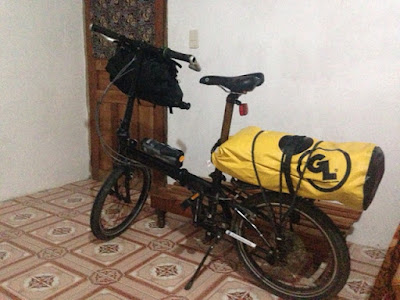 Inside my room I prepared my clown bucycle for dome serious bicycle touring.

My first day of touring would be from Baracoa to Imias over a mountain called La Farola. The mountain is not to tallest mountain in Cuba, but it is one of the tallest overpasses. I did not feel up to tackling this beast on my first day, so I devised a plan to take a bus or truck up the mountain and ride my bicycle down the mountain. 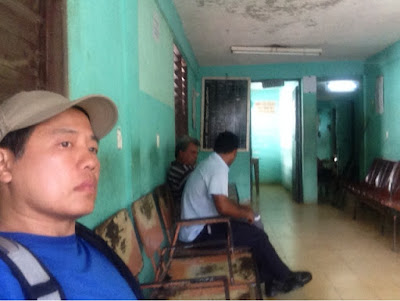 I went to the truck stop and was told by the station manager that there would be a truck at about 9:30am. I would wait.

I waited until about 11:30am. I was just about to make other arrangements when a guy approaches me and says La Farola. I ask him, how? He say in a camion particular (personal truck) for 5 cuc (US$5). 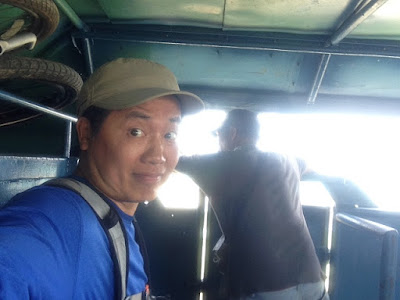 I agreed and got on board. Here I am sitting inside my personal transport over La Farola with my bicycle tucked in the overcab storage area behind my head. 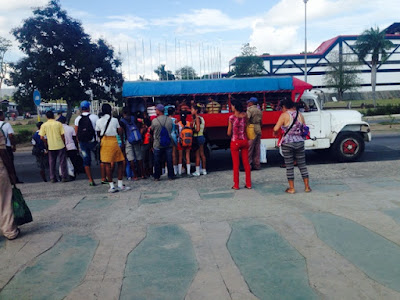 This is what Cuban buses look like. Basically they are Russian work trucks with metal cabins welded on top. 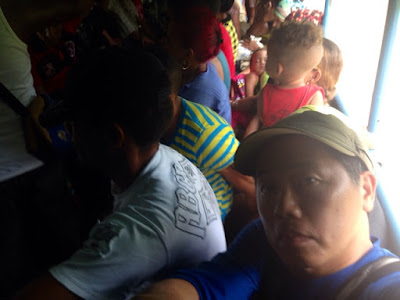 I thought that I had negotiated a personal truck ride for $5. But then the truck started picking up people and soon the cabin was pretty full. I didn't mind the people, but I didn't like the deal. So I asked the ayudante (helper) how much he was going to charge me. He said 5 cuc like we discussed. I said the price was for a camion particular, not a camion collectivo. I said, I'd pay 2 cuc. He said, 5 cuc. I said, I'm getting off. He said, ok, 2 cuc. He knew that he waa overcharging me and changed his mine. He was still getting a pretty good deal by Cuban standards. I felt like I was getting a fair deal and getting more accustomed to the local bargaining culture. 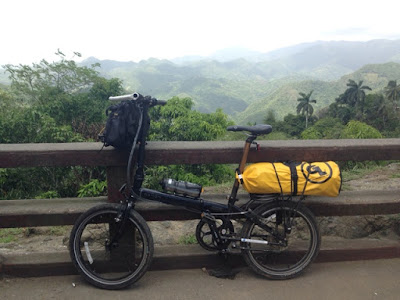 At the top of La Farola I got off and unfolded my bicycle. 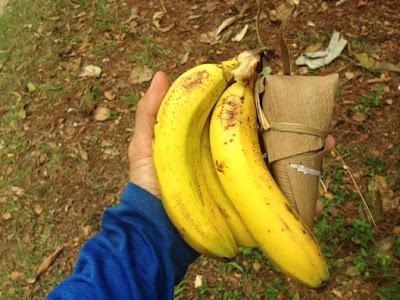 I picked up some snacks which I was equating as my local version of energy bars... some bananas and a cucuruchu. A cucuruchu is a local treat found in the Baracoa area consisting of honey, sugar and coconut... a sugar bomb. 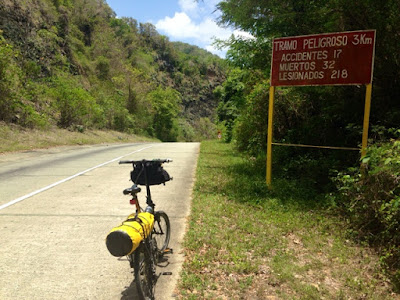 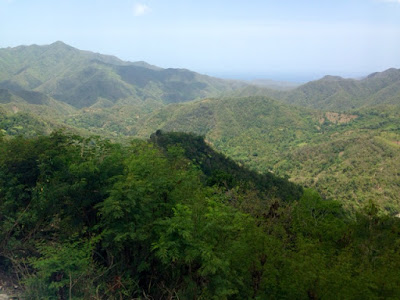 Most of the route would be downhill with spectacular views of mountains, forest and the ocean in the distance. 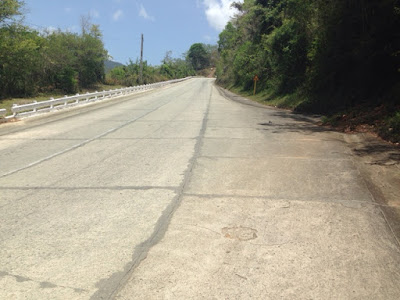 There were still some up sections that were very steep which I got off and walked. 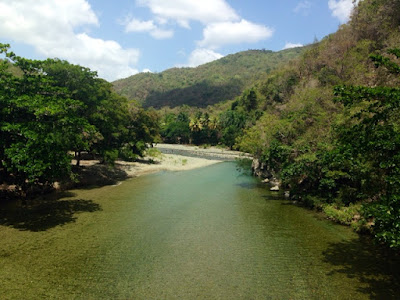 I pased some beautiful rivers. I believe that this was the head waters of the Rio Yumuri which I visited the previous day where it met the ocean. 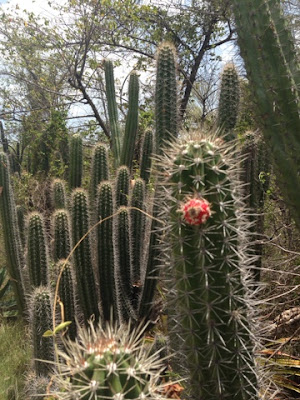 After riding about 40km the environment changed from mountains to plains to dessert. 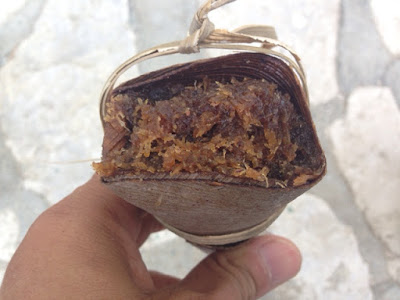 I opened up the cucuruchu and chowed down on the sugar bomb for energy. 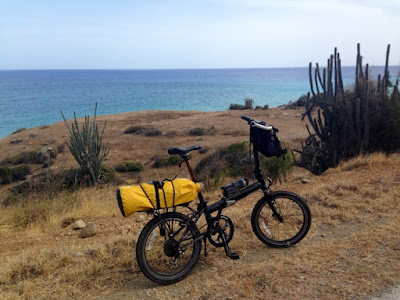 There was one part where I had ocean to my one side and dessert to my other side. The sky was a little cloudy which helped keep the temperature to a moderate 90 F (32 C). 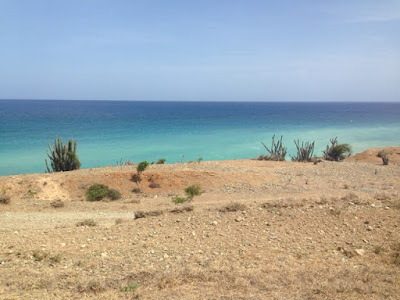 As I neared my destination of Imias the ocean was a crystalline blue. I stopped, rested and jumped in for a swim. 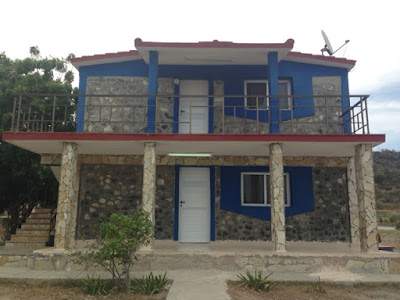 I eventually reached my destination which was a Campismo (camping area) outside the town of Imias. Camping in Cuba is done in these stone and concrete cabins.  Cubans visit campismos to be close to nature, bbq, listen to loud music and scream at the top of their voices across the camp grounds. 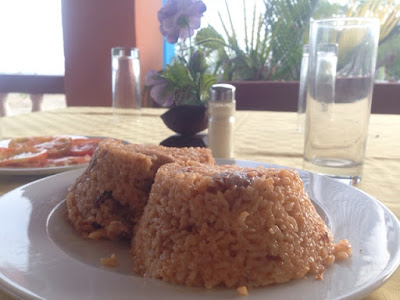 There are little cafes at the campismos that offer simple Cuban fair like chicken and rice. I ordered two portions, downed them and went to my cabin to sleep. With the aid of ear plugs I slept soundly.
By Troy - May 31, 2015