At the casa particular at which I was staying I met a fellow traveler named Robert. He was visiting Cuba on behalf of a travel agency that wanted current photography for promotional purposes. We decided to walk the city. 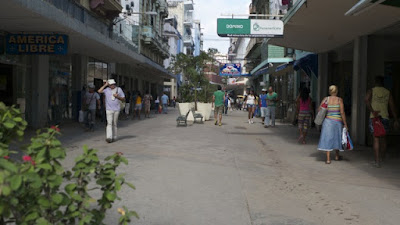 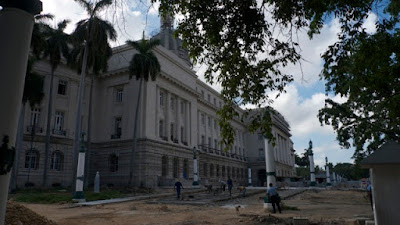 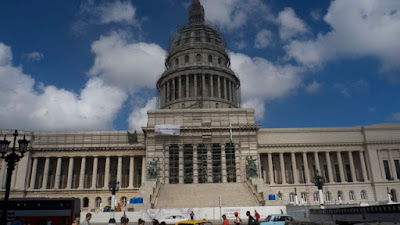 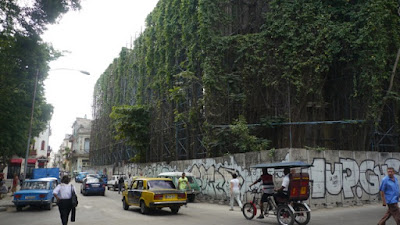 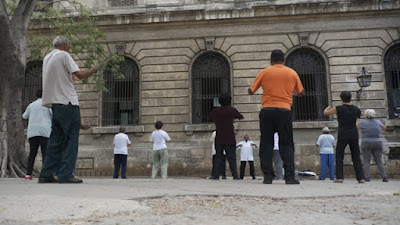 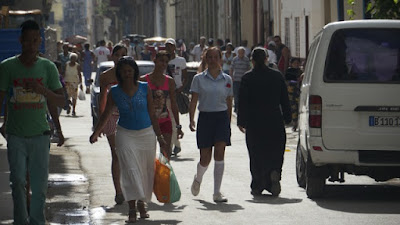 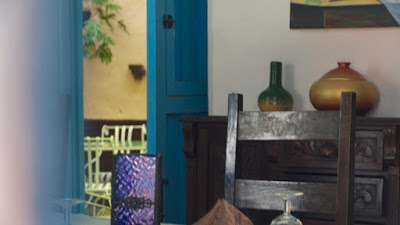 Sneaking a peak through a window into a house. 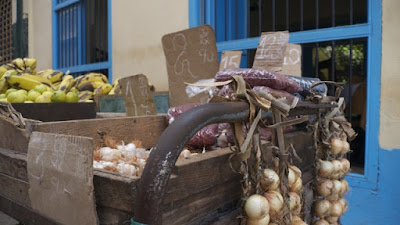 I did not find any local markets, but there were occasionally these little stands with produce. 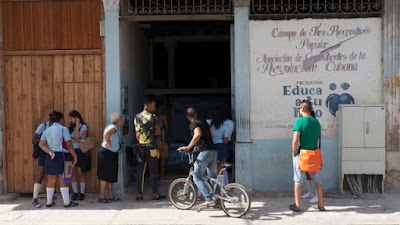 I walked by this group of school kids waiting in line. At first I did not understand what was going on. On the outside of the building there was a sign that read… Camp of Recreational Shooting. 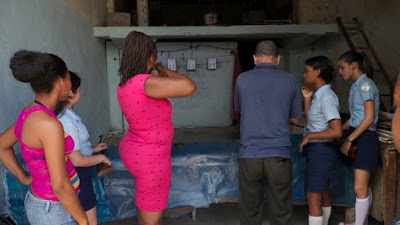 In the doorway, there was a teacher showing her students how to fire a rifle. 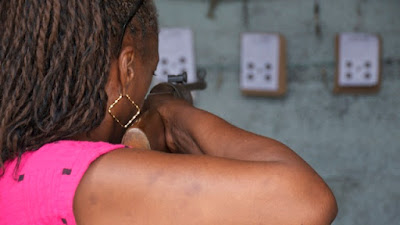 She was not actually a very good shot, but seemed to be enjoying shooting the rifle. 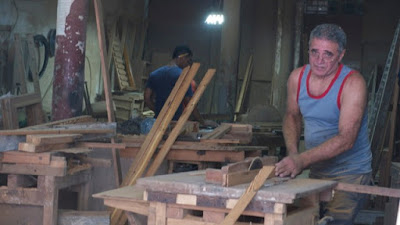 We passes lots of little shops like this carpenter shop. 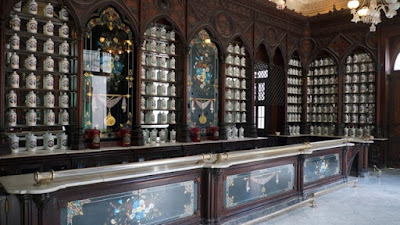 This was an ornately preserved pharmacy. 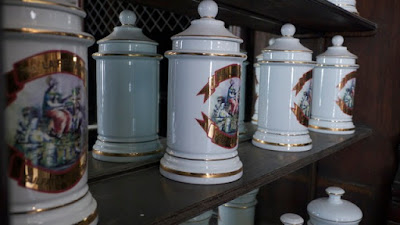 On display were a number of jars supposedly containing medicine. But on the inside, most were empty. 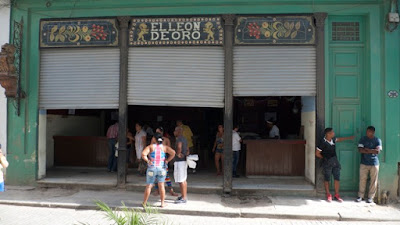 Across the street there was a distribution center for food. I would not call it a supermarket. In Cuba there is a rationing system called Libreta de Abastecimiento (Supplies booklet). 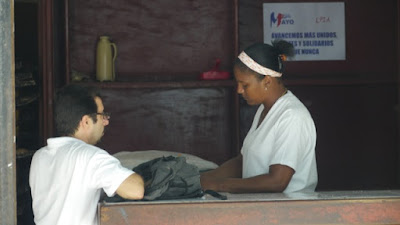 Each day individuals and families are allocated basic rations of food. 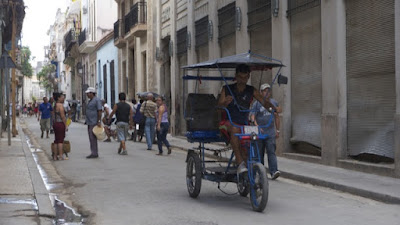 Back out on the street there were pedal taxis on every corner. It is the way many people get around. 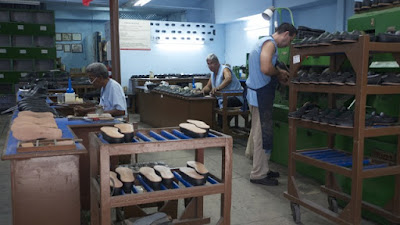 We passed by a shoe cobbler. 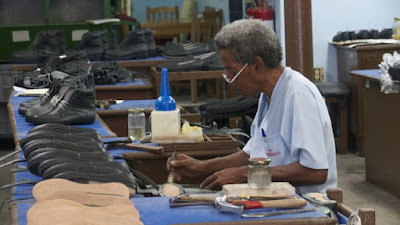 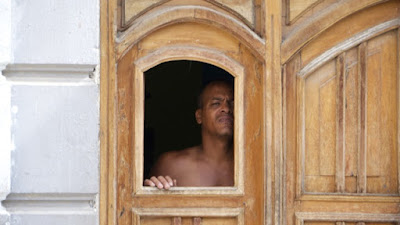 Looking outside from inside. 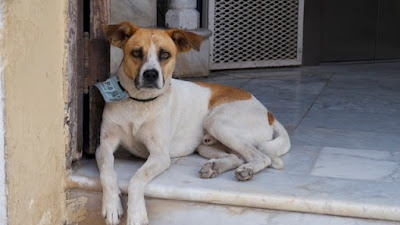 Pets wore collars and licenses. Animals without collars might end up with a different fate. 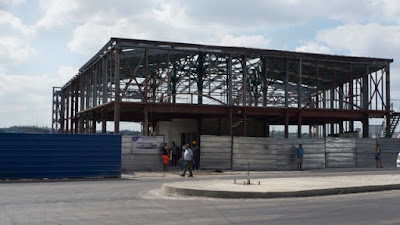 Along the harbor there were signs that there was some new construction going on. This was a new ferry port being constructed. Any guesses where those ferries might be coming from? 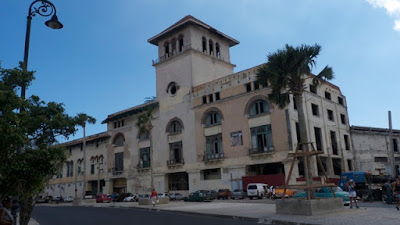 The old port and train station was being remodeled as well. Expecting visitors? 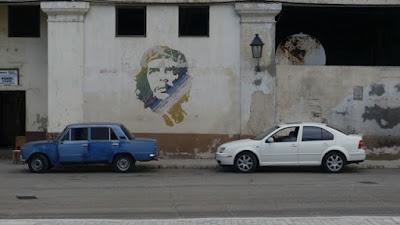 I don't know if Che would approve of the out with the old in with the new consumerism. 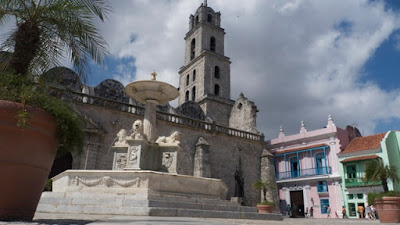 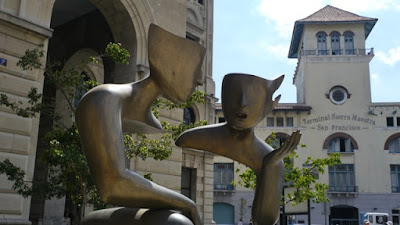 The discussion is open. 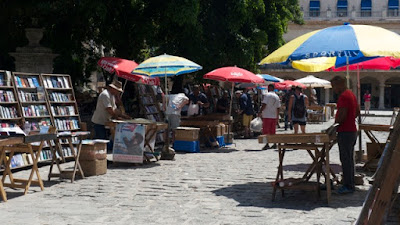 This is the book market in the Plaza de Armas. 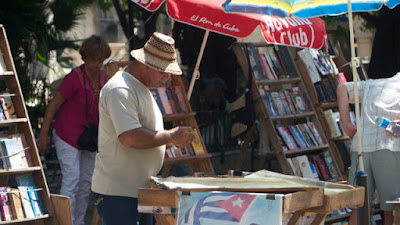 There was some browsing, but I did not see a lot of buying. 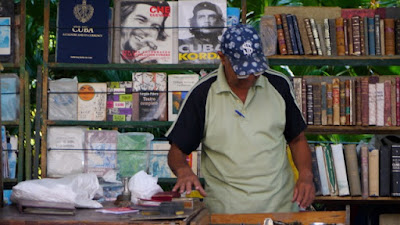 I suppose the selection was somewhat limited to the approved material. This man's hat perhaps indicates what is on his mind. 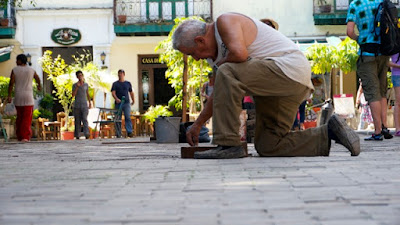 Cuba seems to be laying down a new foundation. But will that foundation be based on Communism or Capitalism. To be determined.