Boise, Idaho and Four States In One Day 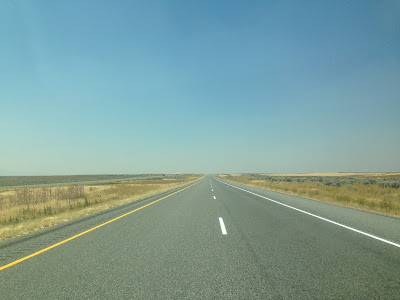 I spent a few days seeking fish holes along the Fly Highway, then I realized that I was running out of time. I needed to make some mileage. 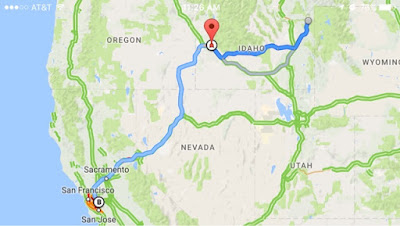 I needed to travel from Idaho to California and cover about 1000 miles within two days. 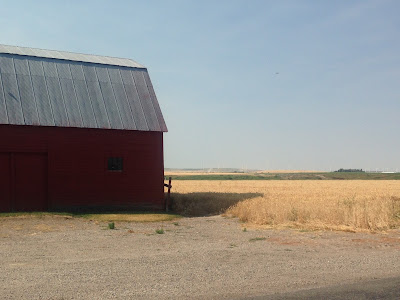 Cutting across Idaho, I passed by farm after farm. I believe that the majority of the farms were devoted to the production of potatoes. While the potato may have originated in Peru and Bolivia, the mass production of the potato, and specifically the russet potato, was probably perfected in Idaho.

Potatoes were first introduced into Idaho not by a farmer but by a missionary named Henry Spalding. He established a mission in 1836 at Lapwai, in the state's northern panhandle, to bring Christianity to the Nez Perce people. He wanted to show the Nez Perce how to provide food for themselves through agriculture rather than hunting and gathering.

Later, when settlers moved into the area, potatoes were some of the first crops that they planted.  In the river valleys, where water was easily diverted, and with the rich volcanic-ash soil, the settlers raised a few more potatoes than they needed and found that the extra potatoes resulted in a good cash crop. From this small beginning, Idaho's farmers set out on the conquest of the potato markets of the United States.

Prior to traveling through Idaho, I did not know much about the state. I knew that the state was famous for growing potatoes, fly fishing and this... 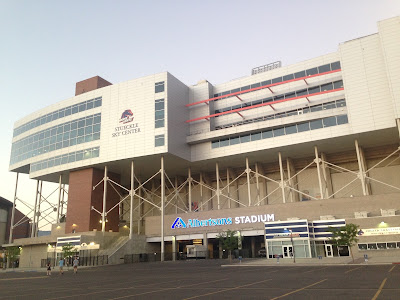 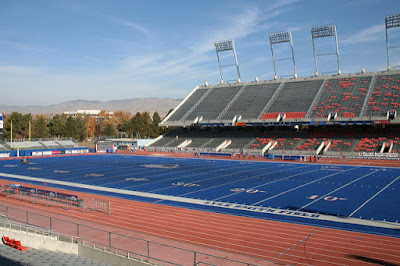 Or more specifically this... Bronco Stadium at Boise State University.

While most football fields are green, Albertsons Stadium is widely known for its unusual blue playing surface. Installed in 1986, it was the first non-green playing surface in football history and remained the only one among NCAA schools for over 20 years.

Chris Berman of ESPN famously called the turf "The Blue Plastic Tundra," a joking reference to "the frozen tundra" of Lambeau Field in Green Bay, Wisconsin. Another nickname for the surface is "Smurf Turf." Players refer to it simply as "The Blue." 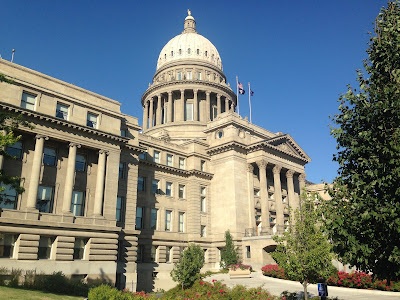 I did not have much time to spend in Boise, but I thought that that it might be worthwhile to drive around a bit and see some of the sites. I passed by the Idaho Sate Capitol Building. 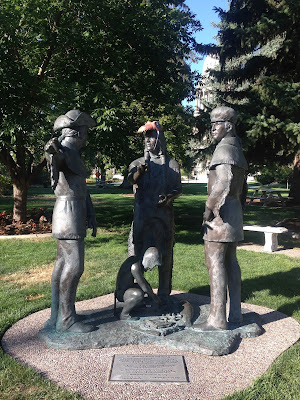 Stood by the statue titled Hospitality of the Nez Perce. 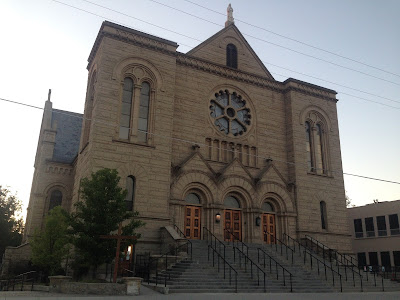 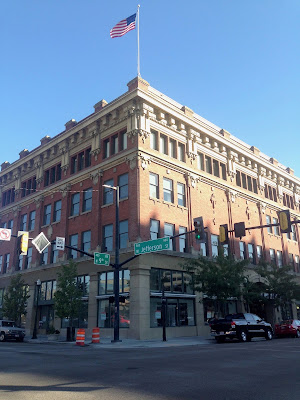 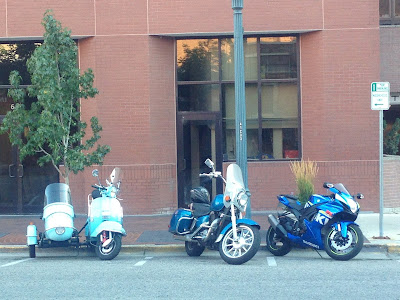 I spotted this odd grouping of motorcycles - a Vespa scooter and sidecar, a Harley Davidson cruiser and a Suzuki GXSR sport bike. 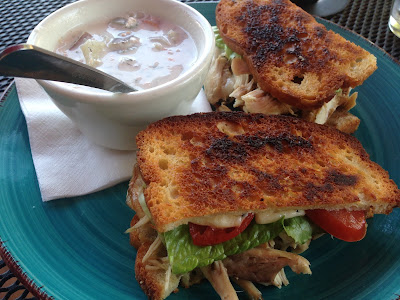 I had a sandwich and clam chowder at a cafe called The High Note. 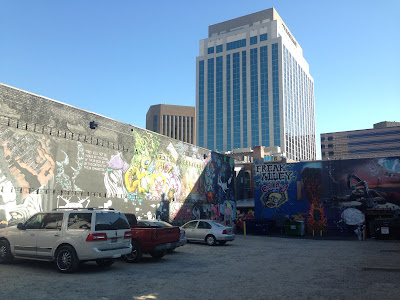 And then, I stumbled upon this place. 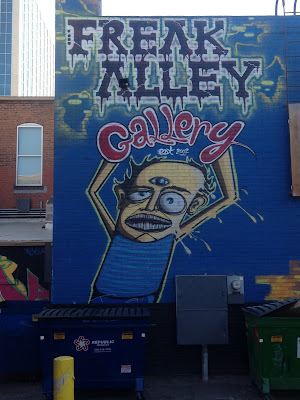 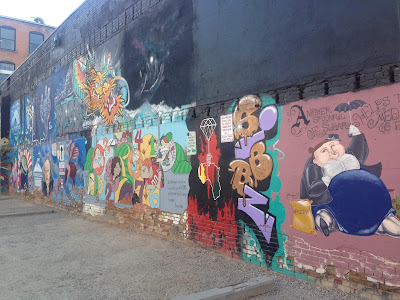 Freak Alley Gallery is a space for public art in the form of graffiti and murals located in an alley and parking lot in the middle of downtown Boise. 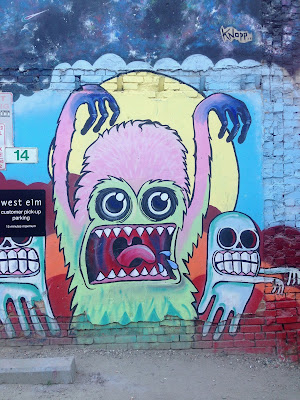 It began with a painting of a single alley doorway and now extends from the alley itself to a car parking lot. An artist named Colby Akers was drawing on an establishment's door. He was approached by one of the employees and simply asked to sign his work when he was done for the day. The artist then asked if he could come back and continue his work. Every since that day the space has been open to artists and their creativity. 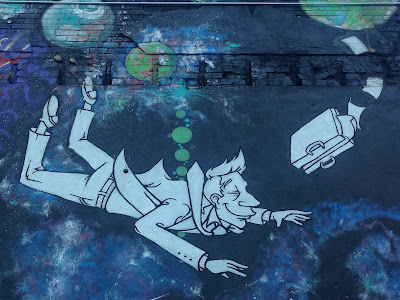 Extant murals are painted over and replaced by new murals every two years. 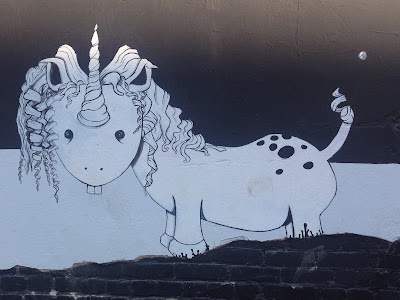 It is the largest outdoor gallery in the Northwest, and a Boise institution. 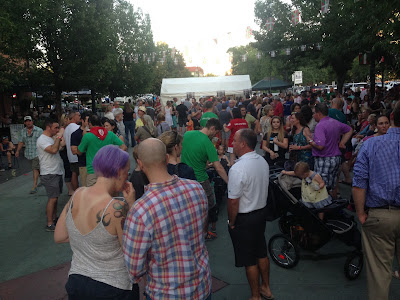 As I was walking back to my car, I happened upon a food and wine street fair. I didn't have time to enjoy it. I had to get back on the road. 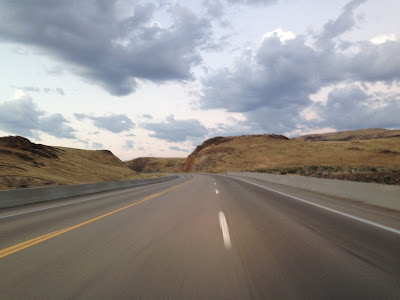 On the next day, I drove from Boise to the Bay Area. 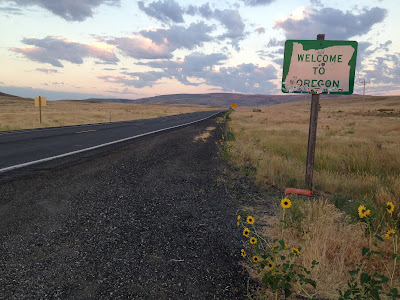 I passed through the eastern part of Oregon. 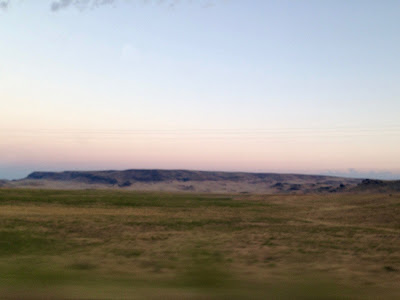 It appeared to me to be a high altitude desert. 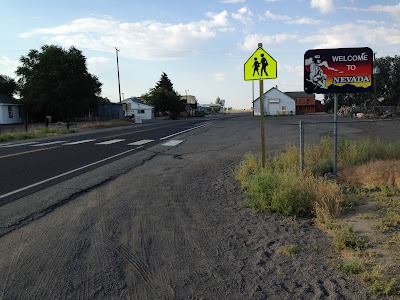 I drove through some really small towns in Nevada. 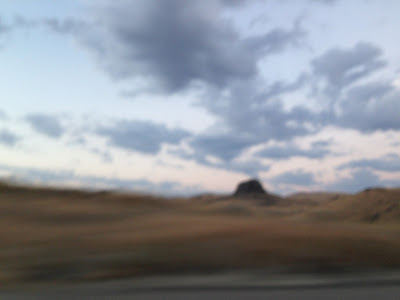 The desert and sky were just a blur. 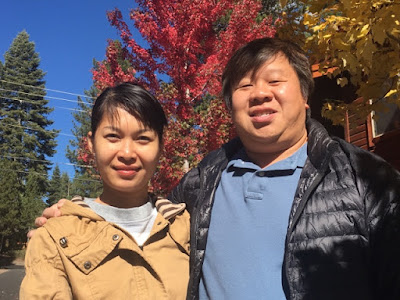 After I passed through the city of Reno, Nevada I called my old friend Bee who was currently living in Fulsom, California. Bee previously lived in Austin. I wanted to see if he had time to meet.

When I got him on the phone, I shared with him that I would be passing by Fulsom in a few hours and asked if he had time to meet up. He said that he was actually in Reno. I turned my car around.

The last time that I saw Bee was a couple years prior when we were traveling through South East Asia. We traveled through Vietnam, Cambodia and Laos together. We went our separate ways in the town of Luang Prabang. I made my way home through Thailand. He ventured back into Vietnam and was planning to travel the world. He never really made it out of Vietnam. He met a beautiful girl named Linh. They started dating, got engaged and eventually got married. They eventually moved back to the US and settled in the town of Fulsom, California.

We met at a restaurant in one of casinos. We talked about the good old days, our trip through SEA, his wedding and his new marriage. This was actually the first time that I had the opportunity to meet Linh. I thought that they made a great couple. 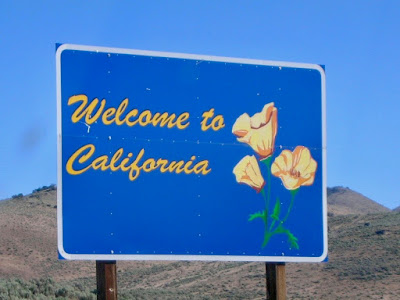 Shortly after our lunch, I was back on the road. I crossed into California. 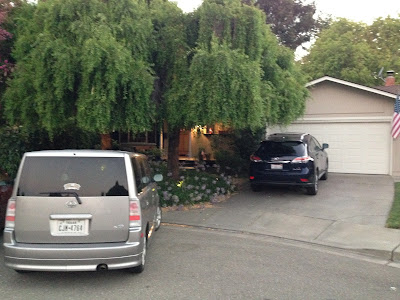 And in a few hours, I arrived at my sister's house.