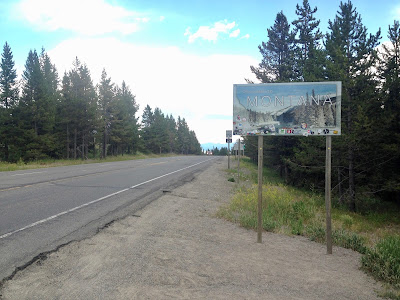 I exited Yellowstone Park on the western side and crossed into Montana. Just outside the boundary of the park is the small town of West Yellowstone. As I was driving through the town I saw a fly fishing shop and thought that it might be a good idea to stop and inquire about possible camping locations and local fishing holes. The store owner was nice and pointed me in the direction of the Upper Coffee Campground. I stopped at a Subway sandwich shop and ate lunch. Then I located a gas station to fill up the tank of my car. I entered the Upper Coffee Campground into my GPS and was provided the directions. 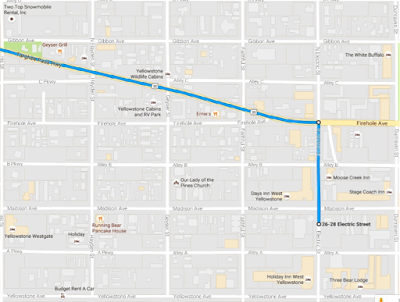 Not being familiar with the city of West Yellowstone, I was relying on my GPS to help me navigate the area. My GPS instructed me to exit the parking lot of the gas service station, turn left onto Electric Street, then turn left onto Highway 20. While at the stop sign at the intersection of Electric Street and Highway 20 I waited for various vehicles to pass. When there was an opening in the traffic, I turned left and began to accelerate.

After passing two streets I reached the speed of 35mph. It was at this time that I saw a police car sitting on the side of the road. The police officer turned on his lights and signaled me to pull over. It had been years since I've been pulled over for speeding, but I knew the procedure. When the police officer approached my window he asked for my license and registration. I had already turned off my car, put my keys on the dashboard and pulled out my license and registration. I handed over my documents.

Realizing that I was in a small town with a consistent flow of tourists/targets passing through, that I had been caught in a speed trap. I realized that I was probably not going to get out of this predicament, so I just mentioned that I had just turned left onto the highway and I may have missed the three speed signs.

By this time a second patrol car had pulled up. The second police officer walked over to the passenger side of my car and was attempting to talk to me through my window. I could not hear what he was saying clearly, so I asked the first office if I could lower my window. He said that I could. I lowered my window. The second officer then said that he saw me speeding further down the street and flashed his lights at me to warn me to slow down. He asked if I saw him flash his lights at me. I was puzzled. I said, no. I asked him when and where did he flash his lights at me. He said that it was back a few streets. I asked him if he was behind me. He said, no. He said that he was on the side road. At this point the first officer signaled the second officer to meet him at the back of my car. They walked around to the back of my car and began to talk. I could not hear clearly what they were saying, but I could make out that the first officer told the second officer that I had turned left onto the highway just two blocks back. They were corroborating their story. Fishy!

The two officers returned to talk to me. The first officer said that he was going to issue me a ticket. He asked if I would like to pay $50 now or he could issue the ticket and I would need to pay $55 by mail or online. Like I mentioned before, it had been a while since I had been stopped for speeding. I wasn't aware that police had the ability or authorization to collect fines on the spot. I was puzzled. I asked the officer if he knew, in this county, if I could take defensive driving to remove the ticket. This seemed to upset him. He said, he did not know. I said, then I would prefer to be issued the ticket because I may contest the ticket. This seemed to upset him more. He reminded me that it would cost $5 extra if I paid the ticket by mail or online. I said that it would be okay.

I was issued a citation by Trooper Marcus N. Cook of the Montana Highway Patrol for traveling 35mph in a 25mph zone.

After I was issued the ticket I circled back in the direction from which I had driven. Sure enough, there was a posted speed sign and there was a hand written speed sign. I suppose that sometimes you have to just pay the man.

I continued on my way. 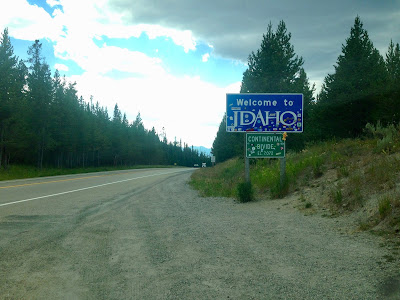 After exiting West Yellowstone, I crossed over into the state of Idaho.

Prior to this trip, I had heard of a stretch of highway in Idaho called the Fly Highway. 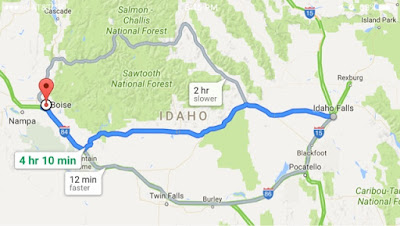 The real name of the road was Highway 20, but it was nicknamed the Fly Highway because the road paralleled a number of rivers, streams and tributaries that were excellent for fly fishing. I first learned of this mythical place from a movie called The Rocky Mountain Fly Highway. There is a movie, website and app dedicated to this road that passes by some of the best fly fishing waters in the world. I had to check it out. 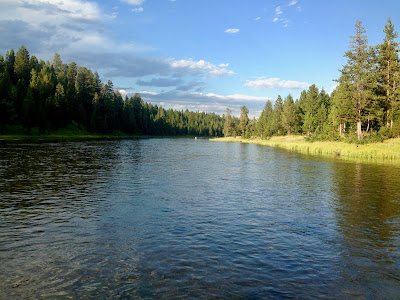 I eventually found the Upper Coffee Campground. I drove around the small campground twice, but it appeared that all the camping spots were occupied. This is one of my techniques for securing a camping spot almost anywhere.

I noticed one camping spot where there was a single man, a single tent and a single car. I approached the man and greeted him. I explained that I just arrived and that it appeared that all the camping spots were occupied. I inquired if he would be willing to share his campground with me and I would be happy to pay the fee for the both of us. He would get a free camping spot for the night. I would get a camping spot for the night. I mentioned that I had a couple of beers that I'd be willing to share as well. He said that he was camping by himself and that he would not mind sharing the spot. He said that he had already paid the fee, so it was not necessary to pay any additional money. I accepted his generosity and we celebrated our new friendship by breaking open a couple of beers that I had stored in my cooler. 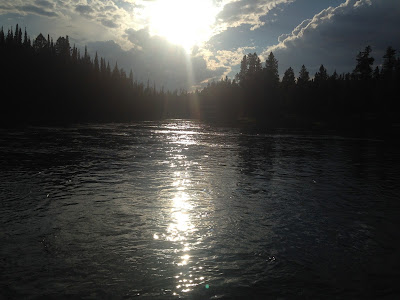 The sun was getting lower in the sky, but the river looked so tempting that I had to try my luck at fly fishing. I fished for maybe an hour, but didn't catch a thing. 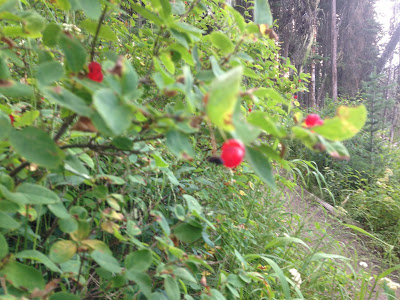 The next morning I woke up early in the morning to try my luck at fly fishing again. I waded into the water and fished up and down the river, but did not have any luck. I didn't know if I was using the wrong flies or technique. I struck up a conversation with another fisherman. He said that he fished this river all the time. It just so happens that we were between the seasons. He said that two weeks ago people were pulling out huge trout from this very location. He said that in another two more weeks people would be pulling out huge fish. He said that there was always a lull in the fishing during this particular time. I was disheartened.

I didn't bother wading and fishing my way back to my car. I simply walked along the shore. There was a young lady walking through the woods with a basket in her arms. She was gathering something from the forrest. I stopped and asked her what she was collecting. She said that she was collecting huckleberries. I had never seen real huckleberries before. I'm not sure if they even grow in Texas.

A Huckleberry is a small berry. However, it is also a vintage slang term in the US. A huckleberry could be used to connote something small. Also, "I'm your huckleberry" is a way of saying "I'm just the man you're looking for".

Anyways, the young lady showed me her collection of huckleberries. I ended the day without catching any fish, but I walked away thinking that at least I learned about huckleberries. 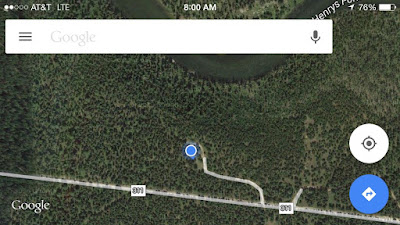 I still wanted to catch some fish. So, I sought help from google maps. I located a river, then I followed a road that ran along the river, then I found an access point to the river. It looked pretty remote, so I thought that maybe there would be less human pressure on the fish and thus more catchable fish. 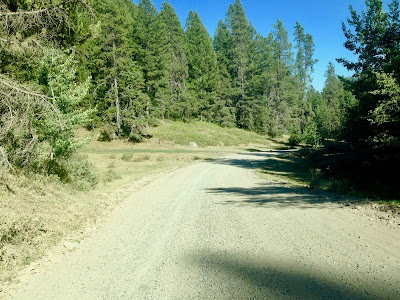 I drove down a gravel road bordered by a forrest of conifers. 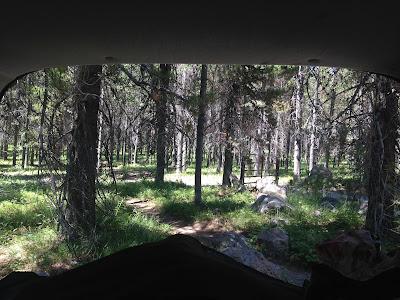 Outside the box. I eventually found this spot to park at an area called Henry's Fork. 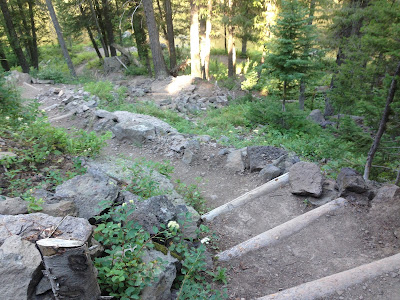 I walked down a dirt road that eventually turned into a dirt trail. The trail descended into a canyon. 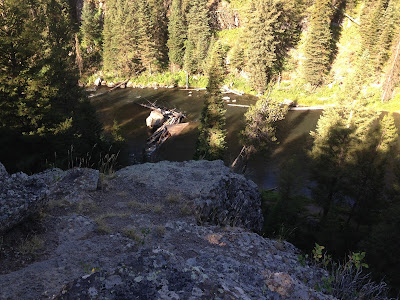 From above the river, it looked like an ideal place to fish. There were bends, ripples, boulders, fallen trees, grass and other great habitat for fish. 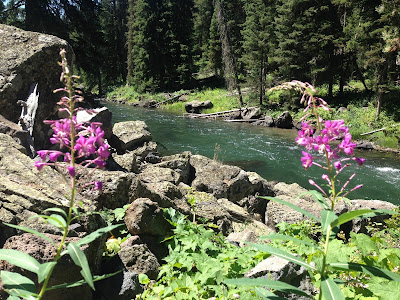 So I spent the rest of the day on this section of the river fishing. 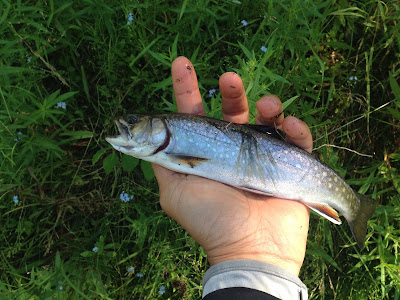 I caught a number of medium sized rainbow trout. Nothing huge, nothing in abundance, but I was satisfied. 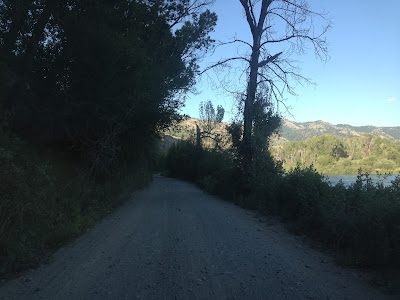 Towards the end of the day I found my way to another area under the management of the Bureau of Land Management (BLM). This area was on the South Fork of the Boise River. On BLM land there is no fee to camp, you just have to find an available spot. 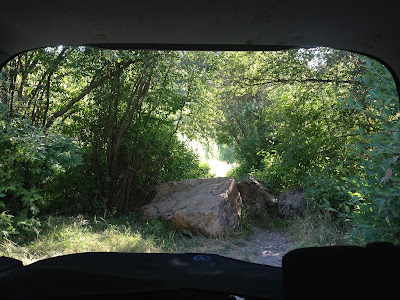 Outside the Box. I found this spot. The scenery in back of me wasn't too grand. 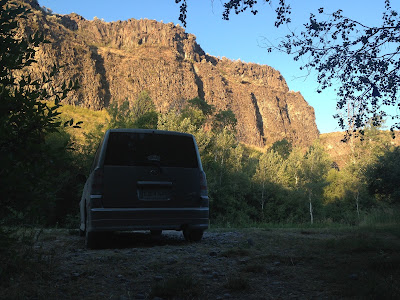 But the scenery in front was pretty impressive. 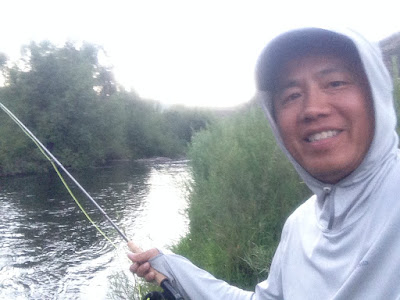 And down a small path there was a river. I fished along this small waterway for an evening and morning. 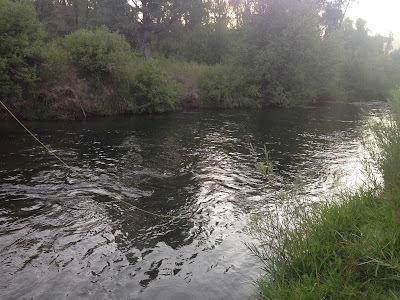 Twenty feet away and under the overhanging tree I hooked into a big trout. As I pulled it close to the shore it shook off my hook and escaped. 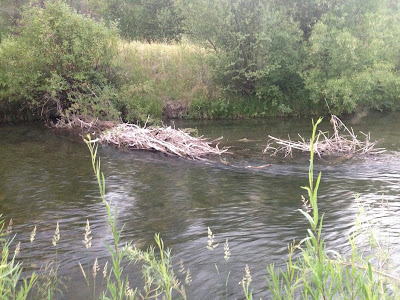 Further down the river I saw a big splash. I went to investigate. I happened upon two otters playing near some fallen brush, perhaps it was their home. When they saw me they took off swimming up river. I was amazed at how fast they could swim. Within 2 to 3 seconds they covered at least 100 feet. They popped their heads out of the water to check on my whereabouts, then calmly swam away on their backs. Playful.

I continued to fish for a couple more days. Then time escaped me. I had to move on.