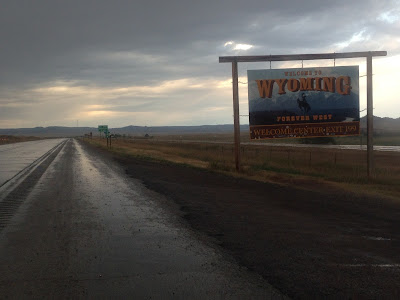 I love wide open spaces. Landscapes that stretch as far as the eye can see. Sky that is unobstructed except for the pillowy clouds. Grasslands that paint the earth green. I've always wanted to visit the state of Wyoming - Big Sky Country. 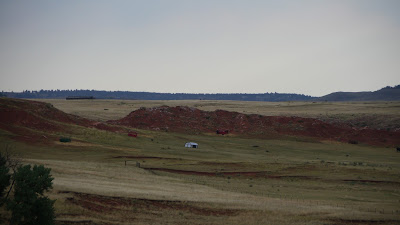 As I departed South Dakota and entered Wyoming there was not an immediate change in the scenery. 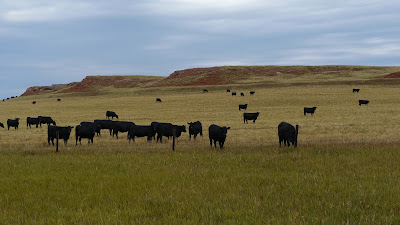 There were still large ranches with green pastures. 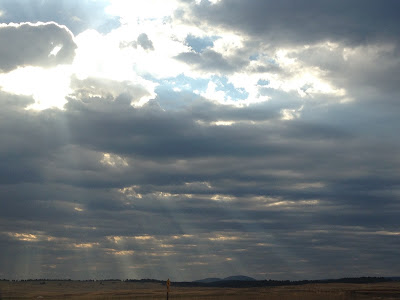 But the sky did seem to expand and cast a different light. 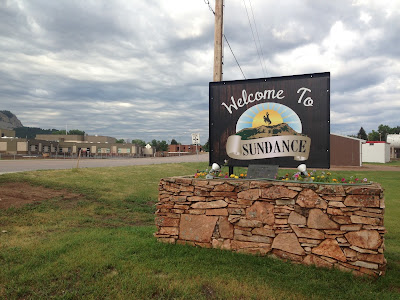 It was still early in the morning when I saw a road sign for Sundance and decided to stop for breakfast. I really knew very little about Sundance. All I did know was that during the wild west days that there was an outlaw by the name of The Sundance Kid. I assumed that he originated from this town. 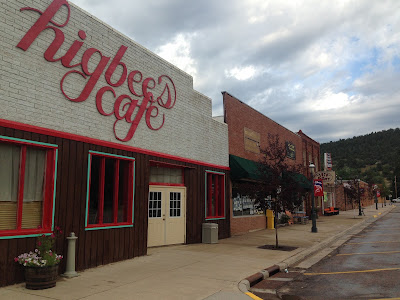 As I entered the town, there was a little main street that had a cafe, general store and few other shops.  Everything seemed to be closed. From a sign, I discovered that the population of the town was only 1,182. And, that the town was named for the sun dance ceremony practiced by several Native American tribes in the area. 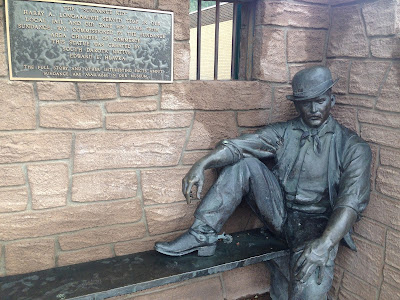 I then stumbled upon this monument dedicated to The Sundance Kid.

Apparently, Harry Longabaugh, at age 15, traveled westward in a covered wagon with his cousin George. In 1887, Longabaugh stole a gun, horse and saddle from a ranch near Sundance, Wyoming. While attempting to flee, he was captured by authorities and was convicted and sentenced to 18 months in jail. During this jail time, he adopted the nickname of the Sundance Kid. He later became a member of Butch Cassidy's Wild Bunch. Together with the other members of "The Wild Bunch" gang, they performed the longest string of successful train and bank robberies in American history.

After pursuing a career in crime for several years in the United States, the pressures of being pursued, notably by the Pinkerton Detective Agency, forced Longabaugh, his girlfriend Etta Place, and Butch Cassidy to leave the United States. The trio fled first to Argentina and then to Bolivia, where Butch Cassidy and The Sundance Kid were reportedly killed in a shootout in November 1908.

The Sundance Kid gained notoriety with release of the 1969 movie which won several Academy Awards called Butch Cassidy and the Sundance Kid. 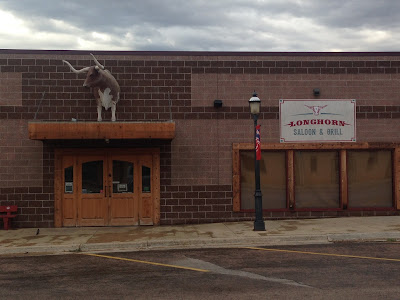 It was still early in the morning and none of the stores appeared to be open - not even the saloon. 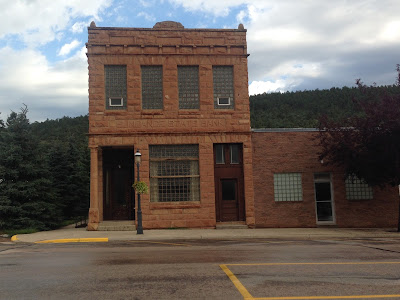 The town still had the feel of a western town. 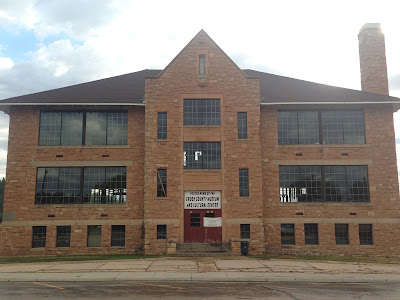 There were some old vacant buildings that indicated that at one time this town was prosperous. 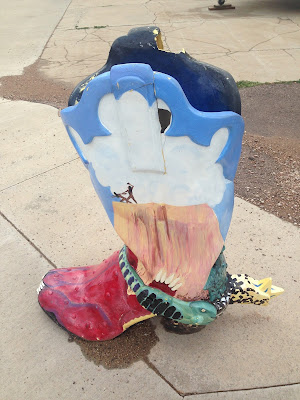 But I guess now the town is more of a quick stopover for tourist looking to catch a glimpse of wild west mythology. 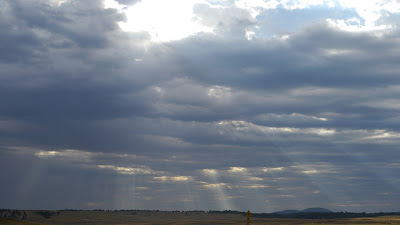 I continued westward and the sky turned gray. 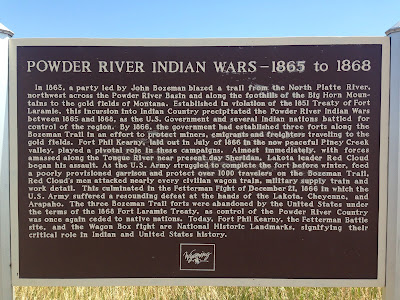 I passed by this historical marker that explained the history of the area and the Powder River Indian Wars. 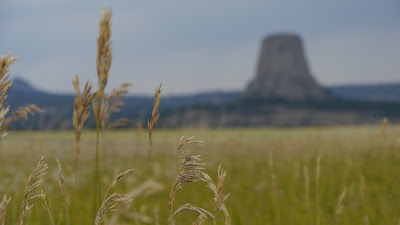 I was headed toward this landmark. 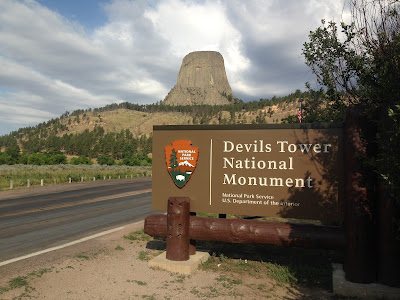 The Devils Tower is a laccolithic butte composed of igneous rock in the Black Hills near Sundance in northeastern Wyoming. It rises dramatically 1,267 feet (386 m) above the Belle Fourche River, standing 867 feet (265 m) from summit to base. The summit is 5,112 feet (1,559 m) above sea level. 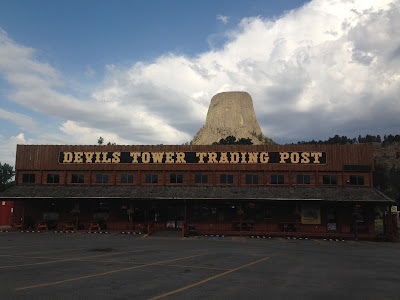 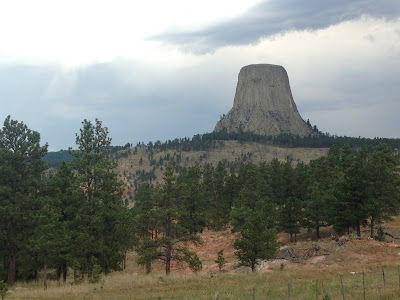 The name Devil's Tower originated in 1875 during an expedition led by Colonel Richard Irving Dodge, when his interpreter reportedly misinterpreted a native name to mean "Bad God's Tower". All information signs in that area use the name "Devils Tower", following a geographic naming standard whereby the apostrophe is eliminated. 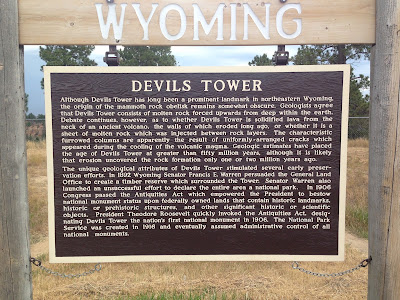 Geologists studied Devils Tower in the late 19th century and came to the conclusion that it was formed by an igneous intrusion. 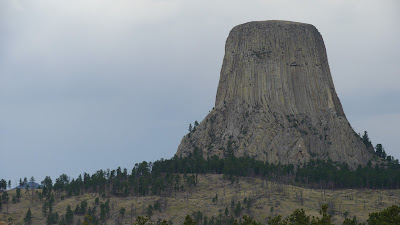 Modern geologists agree that it was formed by the intrusion of igneous material, but not on exactly how that process took place. Several believe the molten rock comprising the Tower might not have surfaced; others are convinced the tower is all that remains of what once was a large explosive volcano. Devils Tower did not visibly protrude out of the landscape until the overlying sedimentary rocks eroded away. As the elements wore down the softer sandstones and shales, the more resistant igneous rock making up the tower survived the erosional forces. As a result, the gray columns of Devils Tower began to appear as an isolated mass above the landscape. 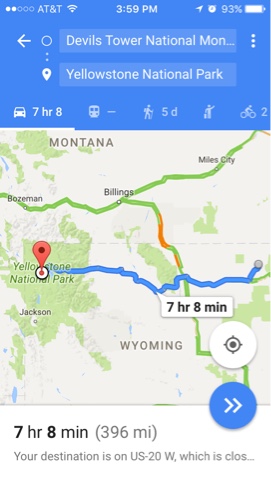 At this point in my little adventure, I was hoping to visit Yellowstone National Park. 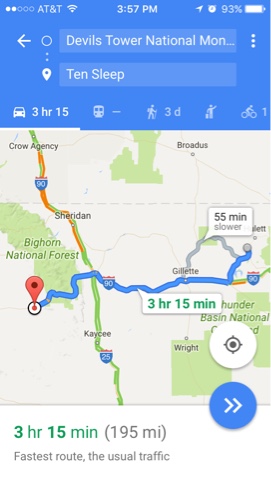 I had been in communication with a friend of mine that lived in the area. He had invited me to visit him in the town where he lived called Ten Sleep. Ten Sleep was in the same direction as Yellowstone and it appeared to be just a little off the main highway. I was behind schedule, but I thought that it would be fun to see an old friend. 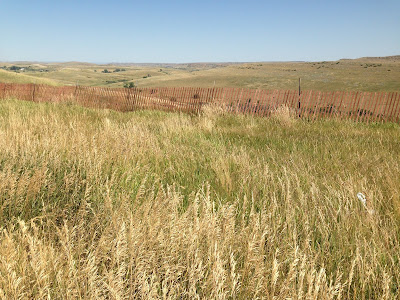 So I started to head toward Ten Sleep. 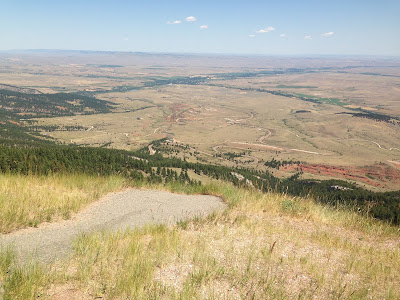 When I reached the town of Buffalo, I turned off highway 90 onto highway 16 which headed toward Ten Sleep. As luck would have it, there was a small tourist information office along the road so I stopped to gather information about Wyoming. It was a small office and there was only one other person seeking information. The discussion was somewhat animated, so I listened in.

Evidently there was a fairly large forest fire burning over the pass in the Bighorn National Forest. The highway department had closed access to highway 16 and the route that I was planning to travel. I inquired if there was another route to reach Ten Sleep. The gentleman said that there was a gravel backroad to reach Ten Sleep, but he did not advise driving that route unless I knew where I was going. He said that there would not be signs and that he could not guarantee that the road would be open. 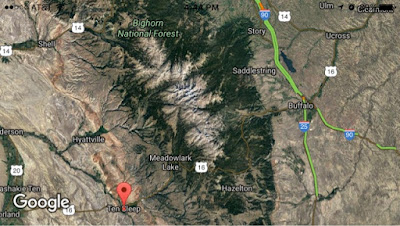 I contacted my friend and we discussed the situation. He said that he had heard that the main highway had been closed, but he thought the alternative route would probably be open. I looked on my GPS and on my map and I could not identify the alternative route. There appeared to be a round-a-bout route to reach Ten Sleep which involved going north, then west, then south - basically making a loop. My friend told me that that route would probably take 3 to 4 hours. It didn't look promising.

Finally my friend said that he and his family were hoping to get out of the house and do some hiking, so he proposed that maybe we could meet for lunch at the Burgess Junction. He said that it would probably take me 1 and 1/2 hours to reach the junction. And it would take his family 1 and 1/2 hours to reach the junction. It sounded like a good plan. For some reason, I could not find the Burgess Junction on my GPS. However, my friend told me to go highway 90 to highway 14 then after a while I'd recognize the junction when I saw it. When traveling, I sometimes like a little ambiguity. So I climbed back into my car and headed down the road. 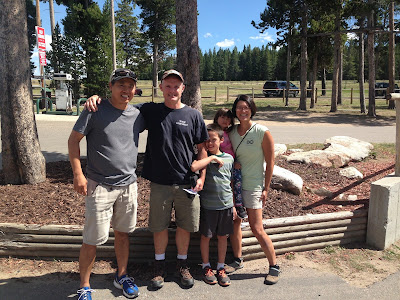 After driving through some really majestic mountain passes, I did find Burgess Junction. And I was able to meet up with my friend Justin, his wife Jody and their kids Yosh and Siri. There are not many people who would drive 1 and 1/2 hours out of their way to meet up for lunch. Justin is one of those guys. 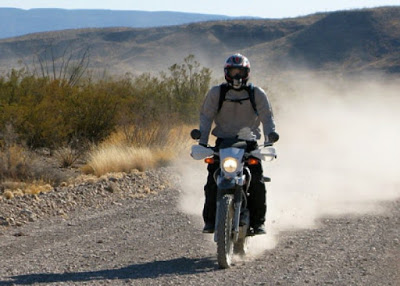 When I was first learning to ride a motorcycle, Justin was generous to share his knowledge and show me the ropes. I believe that he took this photo of me years ago while riding in Big Bend, Texas.

We had a nice lunch and talked about family, friends, food, travel, motorcycles and life.

My only regret was that I was unable to actually visit Ten Sleep. In Ten Sleep, Justin and his family own and operate a brewery called the Ten Sleep Brewing Co. I missed out. If you're ever in the area, try to check it out.

After lunch, we said our goodbyes. Justin gave me a tip that I would be heading in the direction of a pretty cool formation called Shell Falls. And that it might be worthwhile to check out. 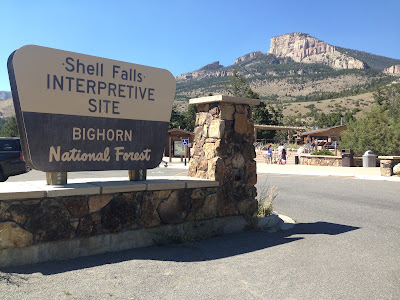 I continued heading west and did pass right by the Shell Falls Interpretive Site. 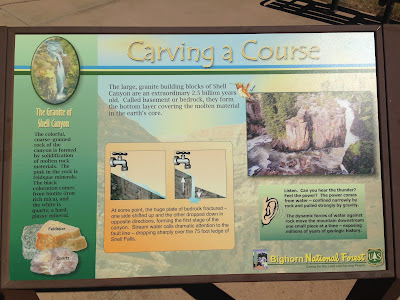 From what I could gather, Shell Falls is a waterfall on Shell Creek in the Bighorn National Forest. 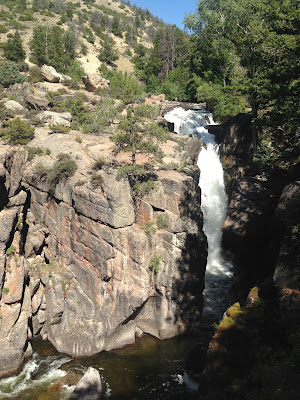 The falls are 120 feet in height and tumble over basement rock of granite.

From the interpretive center, one can see outcrops of the Cambrian flathead sandstone, about 550 million years old, resting on 2.9 billion year old Precambrian rocks—some of the oldest rocks on earth. 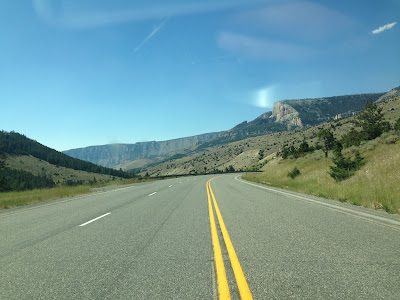 After a quick view of the falls, I continued westward.