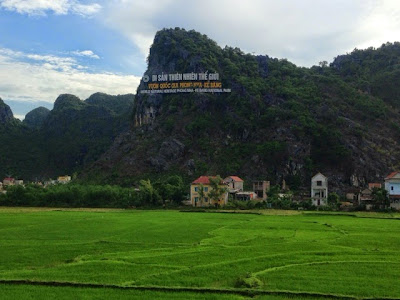 I found myself in the town of Phong Nha. The town is located at an elevation of 200 meters above the sea level, near the west branch of Ho Chi Minh Highway, in the Quảng Bình Province, Vietnam. The town is nestled in a valley and surrounded by a small but jagged mountain range. The thing to do around this area is to visit caves. The largest cave in the world is located in this area along with a number of other caves. 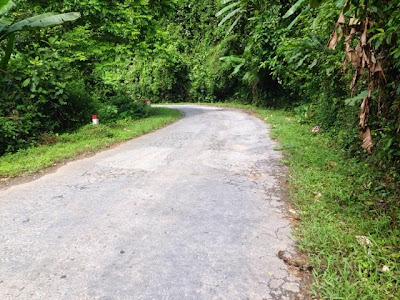 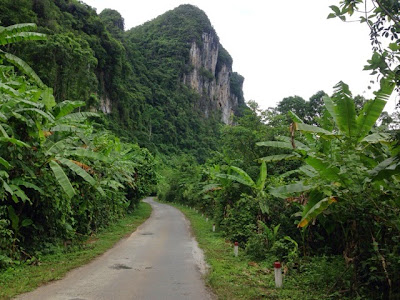 The road was a single lane that twisted through lush green forest. 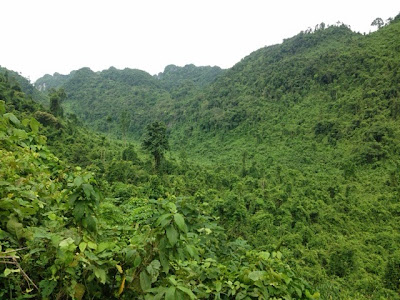 I pulled over to the side of the road to look and listen. With no other people around me, I could hear the sounds of the of the dense forest… birds, insects, water, wind. 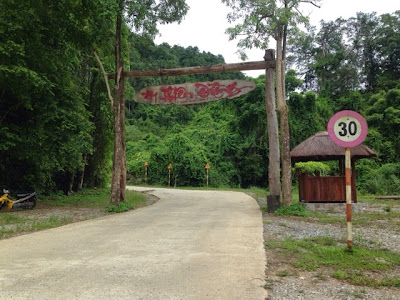 I located the road to Paradise Cave, which is a cave in the Phong Nha-Kẻ Bàng National Park. 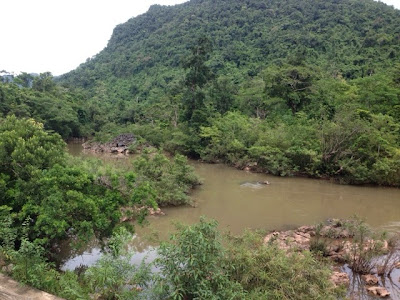 There was a river and swimming hole running along the road. I did not stop for a swim because I was excited to check out the cave. 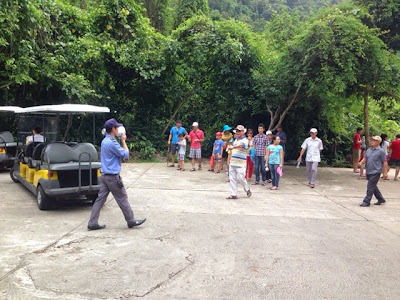 Paradise Cave attracts a lot of tourists. There were golf cart shuttles that would carry tourists from the ticket booth close to the entrance of the cave. 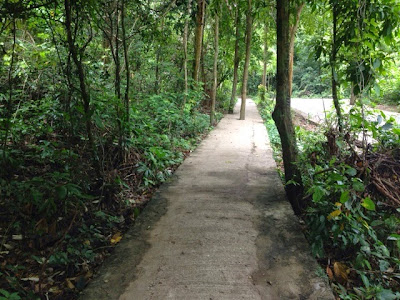 I decided that I wanted to approach the cave in a more natural way so I walked along a nice nature trail for about 2 km. 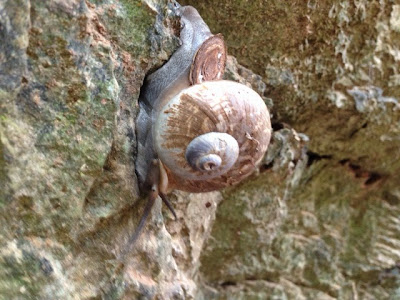 Along the way I found this snail. I spotted the snail because it was not so little, it was about the size of a golf ball, so it was hard to miss. 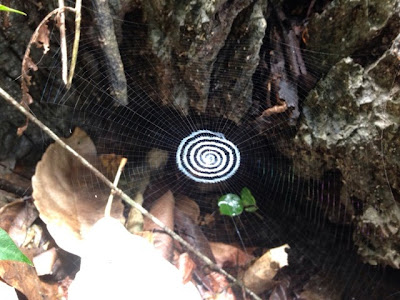 I also came across this unusual spider web. In the middle of the spider web there was a geometric circle design… incredible. It caught my eye, I'm guessing that it is also good at catching bugs as well. 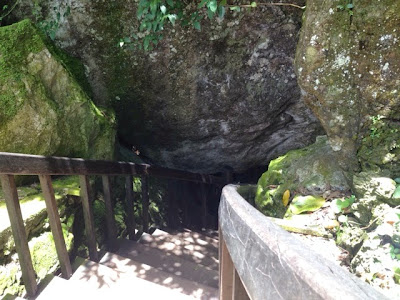 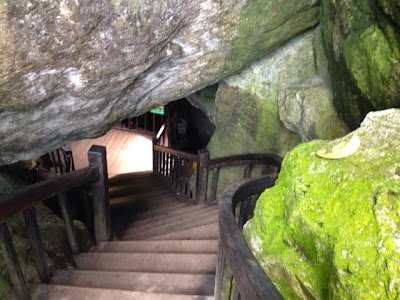 The cave was discovered by a local Vietnamese man in 2005. Later, the 5 first km of this cave was explored by explorers from the British Cave Research Association.  The whole 31 km was explored and publicly announced by the British cave explorers. At the time, this was the largest explored cave in the world. 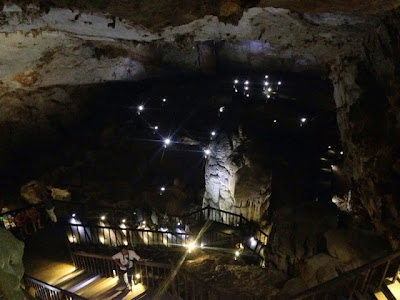 This cave is 31 km long, longer than Phong Nha Cave which had been considered the longest cave in this national park. The span of the cave can reach 100 m high and 150 wide. The limestone formations are said to be some of the most spectacular formations in the area. The British cave explorers were impressed by the beautiful and spectacular stalactites and stalagmites inside this cave and they named it Paradise Cave (Thiên Đường) Cave. In 2012, a new scorpion species Vietbocap thienduongensis was found here. 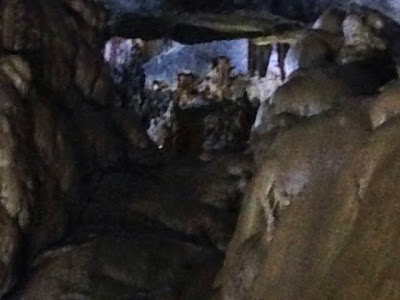 A look deep into the cave, beyond what the eye could see. 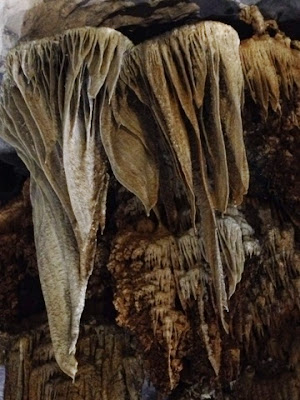 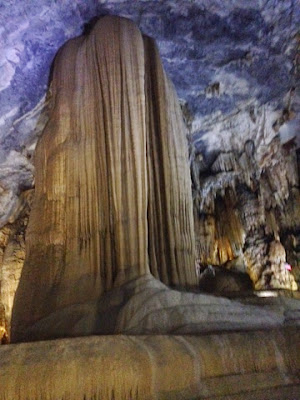 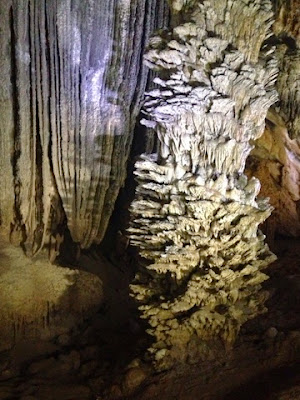 A little of both and some strange formation growing in every direction. 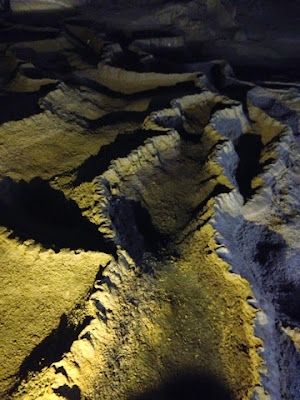 Ridge formations on the floor of the cave. 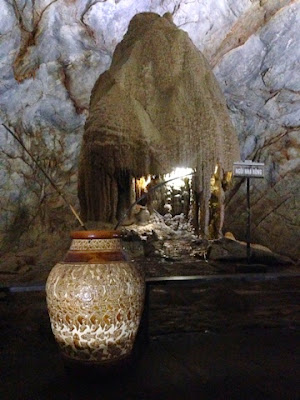 A shrine within the cave 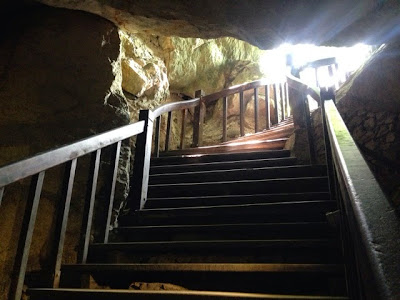 In 2009, a larger cave than Paradise Cave was found in the park called Son Doong Cave. At this time, the cave is still being charted and only scientific teams are allowed into the Son Doong Cave.
Here's a cheesy little video of the cave.