Hoi An to Dalat… Adjusting to the sun, rain, dry, dust and clouds 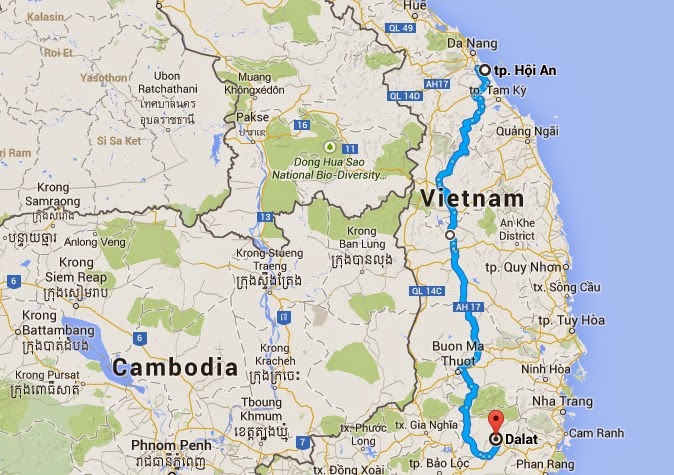 From Hoi An I wanted to travel to Dalat. I could have traveled along the coast, but I was not enjoying the ride along the main highway called the A1. The highway had lots of traffic, big trailer trucks, areas under construction and the scenery along the road was just not very pretty. So I decided to take the road less traveled and I headed toward the interior highway the AH17. 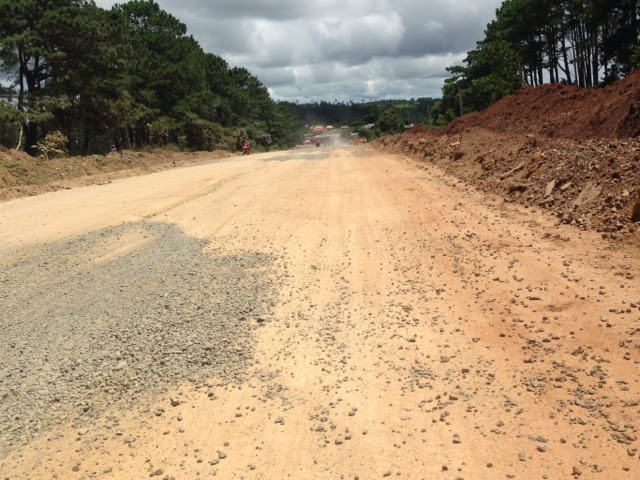 Once I turned off the A1 highway the road varied between asphalt, to gravel to dirt. 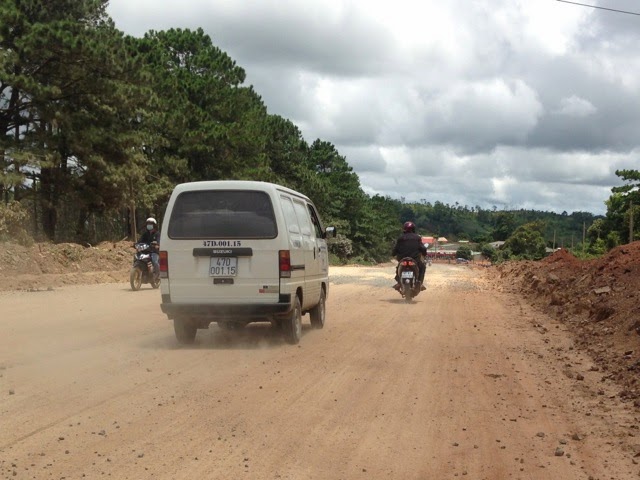 When riding behind other motorcycles or minivans I found that the traffic would kick up quite a bit of dust. 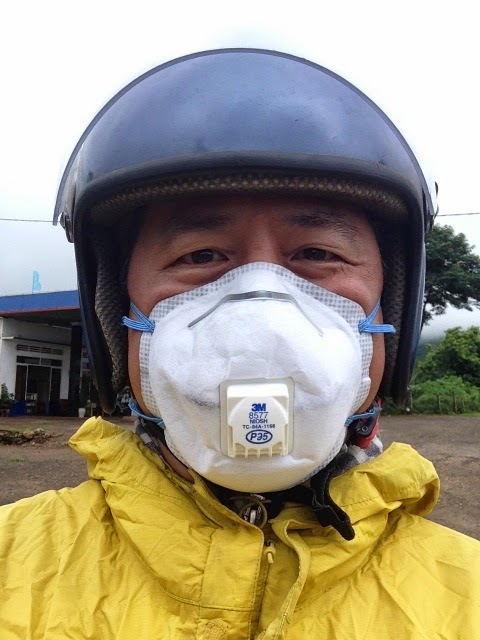 So, I felt that it was time to pull out my 3M mask that filters out particulates and odors. I was amazed at how well this mask worked. It did protect me from breathing in particulate matter, but it worked so well that it filtered out the smell of exhaust. I don't know why I did not pull this out earlier in my trip. In the USA this mask cost about US$7… and it was worth every cent. It was a long day of riding back roads. 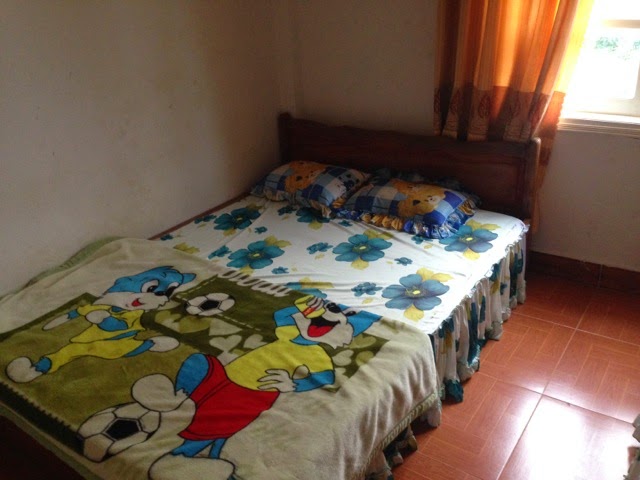 I knew that I would not be able to travel the entire distance between Hoi An and Dalat in one day. I rode for most of the day. It started to turn dark, so I started to look for a hotel. I found a hotel in the middle of nowhere in particular. The colorful decor made me feel like a kid again. 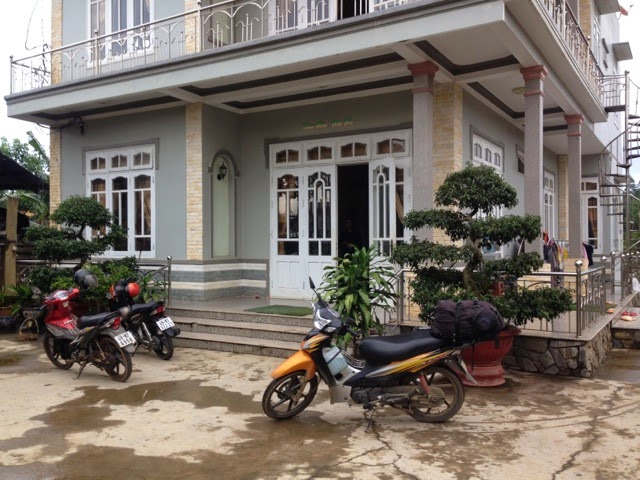 The next morning I skipped breakfast, packed up my things and hit the road. I knew that I had another full day of riding ahead of me. 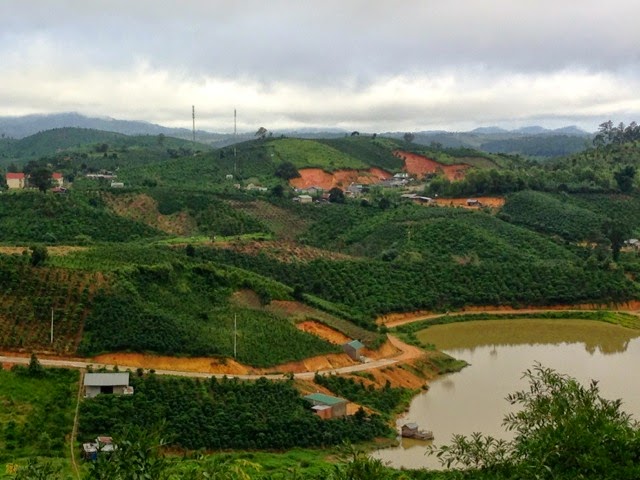 I was surprised that as I headed south and west the terrain turned green and hilly. I do not know why, but I honestly was expecting the geography to be flat. 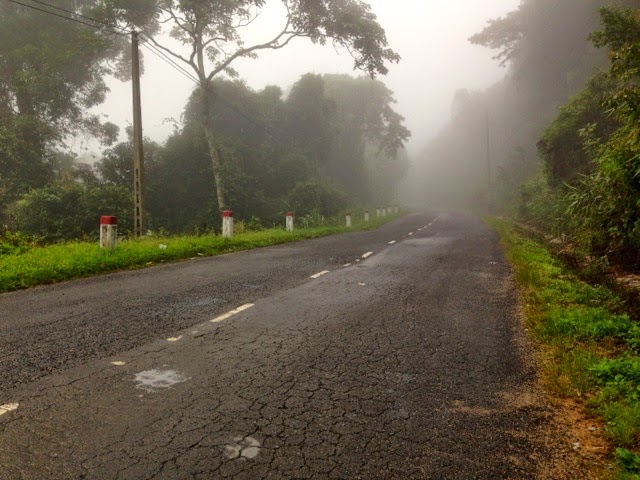 After a while the terrain actually turned mountainous. It began to rain and at one point a fog rolled in. During this part of the ride my visibility was limited to only about 50 feet. It was okay, there wasn't much traffic, so I eased off the throttle, slowed down and opened up all my senses. 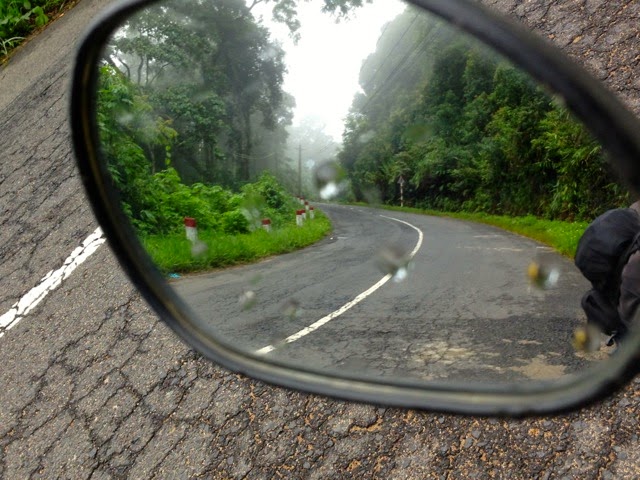 Looking back, it was one of those moments in which I felt very at peace. I felt like I was one with my motorcycle, my motorcycle was connected to the road, nature was enveloping me and I sensed that I was effortlessly carving through the clouds… I was in the zone. 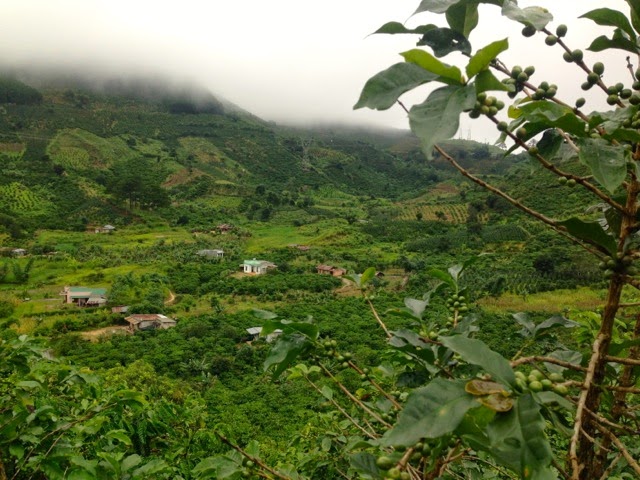 This is a story that is perhaps a little rediculous. For most of this day it was raining. I got drenched. I had a rain parka that protected my upper body, but I did not have rain pants to protect my lower body. I was wearing quick dry pants that would dry if the sun came out and the wind was warm. But it was a pretty continuous rain, so my pants and underwear stayed wet. Therefore, I developed an interesting strategy to cope with my wet bottom. I decided to ride without underwear… that's right… commando! What I realized was that when my pants and underwear got wet, the sun and wind were not strong enough to dry them. But if I rode without my underwear, the sun and wind would dry my pants.

I feel a bit silly sharing this information, but in this situation I found this to be the most effective manner to dry my clothes while on the road. Maybe this silly technique might be of use to some other adventure motorcyclist that is riding through the rain somewhere around the world… or maybe not. 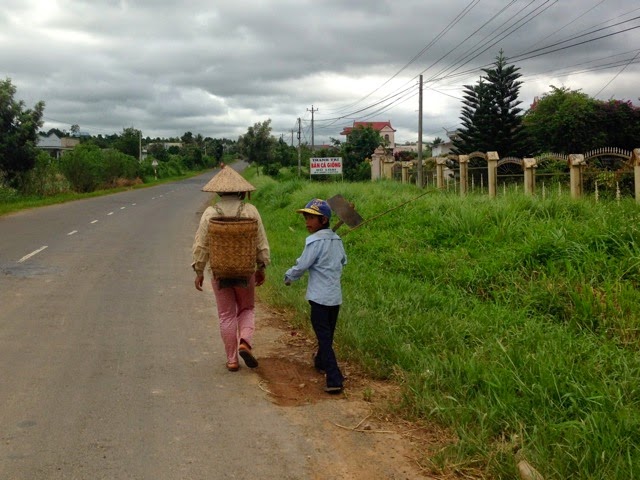 From my ride between Hoi An and Dalat, this photo is my favorite. It was late in the afternoon. I was riding through a farming area. I parked along the side of the road to take a little break. This father and son walked by. Based on some of the tools that they were carrying I could deduce that they had been working in the fields during the day. But I could also tell by some of the other equipment that they were carrying, that they had been fishing. They walked right by me, then the boy turned half way around to look at me, then I happened to snap the photo. The focus was a little off. But this image reminded me of some basics of life everywhere… father and son, work and play.