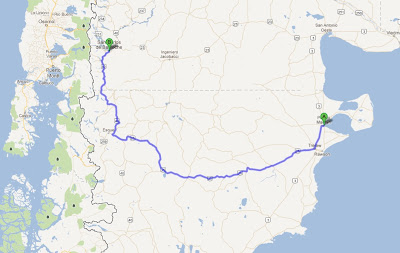 From Bariloche I wanted to travel to Puerto Madryn and the Valdez Peninsula. I planned to split the journey of about  620 miles (1000 km) into two segments. From the map you can see that there really was not much in between the two locations. There was one town called Esquel in the west, one town called Trelew in the east, and in-between... there was whole lot of nothing...except pampa.

Supposedly, about half way between these locations there was a town called Paso Del Indio (The Indian Pass). It was on a road map that I had, but it did not show up on google maps. Paso Del Indio would be my resting place since it was about the mid-way point. I searched online to see if there were any hotels in Paso Del Indio, but came up empty. Well... in a worse case scenario I could camp. 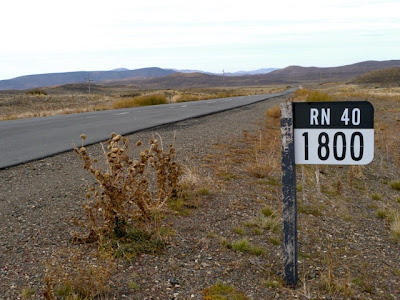 I headed down Ruta 40 to Ruta 25. It was a long and flat and straight asphalt road all the way. After a full day of riding I pulled into Paso de Los Indios.

In Paso Del Indio, I would estimate there were no more that 50 houses in the entire town. Exactly two hotels. One hotel had about 6 rooms. The second hotel had exactly 2 rooms. I stayed in the hotel with 2 rooms. The one restaurant in town wasn't open, so I went to a small tienda (store) and bought some ham and bread and made a sandwich for dinner. And, one gas station with gas! Not exactly a tourist destination. However, the people were super nice.

I bedded down for the evening.

The next day, I would continue on my way. I was not looking forward to the ride, because I anticipated that the road would be long and flat and straight and boring... and it was.

For a while... then I came across a beautiful pass...The Paso Del Indio. There were dramatic bluffs lining each side of the road, rock formations the size of skyscrapers and the road snaked between them. It reminded me of Big Bend, Texas or Sedona, Arizona. I was amazed.
Here is a short 1:30 minute video that shows some of the ride. Unfortunately, I did not have my camera mounted and ready to roll when I was passing through the really scenic areas. 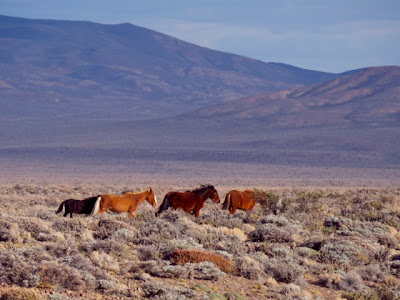 It was just one of those days when I had to pinch myself... and be thankful for being in the moment. It was one of those days in which I was expecting the worse...but was blessed with something unexpected.
By Troy - May 18, 2012