A Slight Detour of 5 Hours

From the town of Rio Grande I planned to ride across Tierra del Fuego through San Sebastian to a little town call Provenir from which I would take a 2 hour ferry to Puntas Arenas.

The journey started off on asphalt with moderate wind gust of around 20mph. By now any gusts under 50mph are manageable. 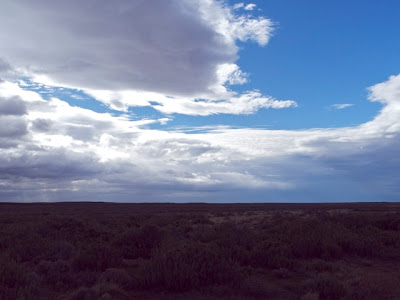 When I reached the pampa the wind dropped...but so did the rain. 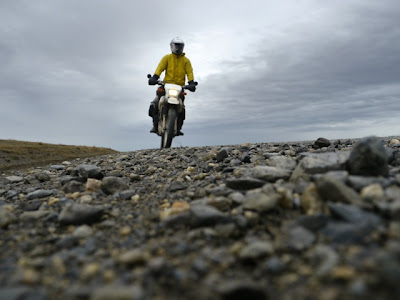 From San Sebastion it was gravel and dirt and rain. Luckily it was not cold, so I didn't mind it so much. Actually I kind of enjoyed it. There was absolutely no traffic on the road. Except for a patagonia fox, a few guanacos and some nandus. I tried to stop and take photos, but those critters are fast. 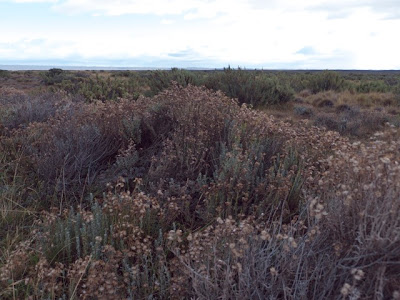 Sometimes when I'm riding in these remote areas with no traffic coming or going I get a little nervous. What if I go down? What if I get lost? 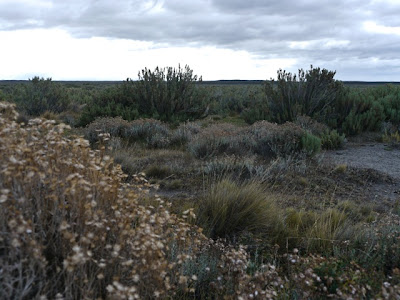 But for some reason today all of those negative thoughts did not occupy my mind. I was open to whatever lay ahead. The total ride should have taken about 4 hours. But the rain, animals and some photo taking slowed me down.

I needed to push. I sped through town.

Just as I was pulling up to the ferry loading area...the ferry was raising it's gate and pulling out to sea.

I had missed it by about 2 minutes. Shucks!

My options were not good. The ferry departed once a day. The next ferry would be the next day.  There was an alternative route in which I could travel east and north, take a 15 minute ferry, then west and south, basically making a loop around the Strait of Magellan and a bay. The route would take about 5-6 hours.

I was kicking myself for stopping to take photos of those guanacos. I didn't even get a good shot before they ran off.

Not wanting to stay in Provenir and waste daylight I decide to take the alternative route.

I asked for directions from two different people. It's my way of confirming directions. Each person warned me that the first stretch is ripio (gravel). I asked how bad it was. All I got back in response was a facial gesture that I was not entirely sure how to interpret. Ripio can be fun to ride in if it is compacted, but dreadful to ride in if it is loose.

I filled up with gas, then headed off.

The first few miles it was all asphalt. And then came the ripio. I slowed down. At first the road was primarily hard pack dirt with small pieces of gravel the size of peas. Easy to ride on. 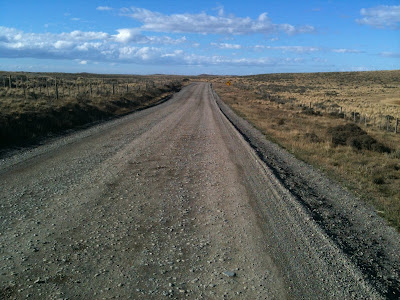 Then I came across some larger gravel the size of olives. Still easy to ride on, but the larger pieces of gravel allow the tire to slide around a bit more. 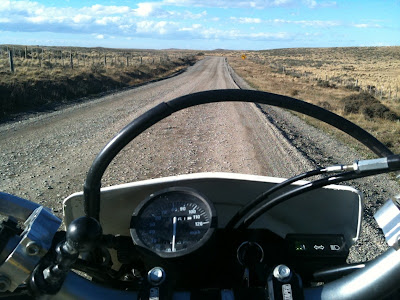 Then came grooves of hard packed dirt with banks of loose gravel. It's fine to ride in the grooves, but to move over one of the banks or to react in an emergency could be tricky. 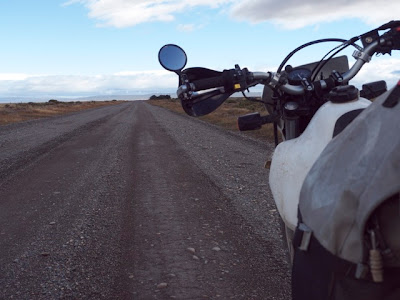 I relaxed and rode on. Every once in a while I'd come across a grapefruit sized rock in the middle of my groove that I would have to avoid. OK, hop the bank, no problem. But honestly, I was kind of in the zone.
The weather had cleared and the wind was moderate. I was riding and standing and weaving between the obstacles like it was second nature. I was enjoying this.

After about 2:30 hours of pure riding bliss I came upon the Strait of Magellan where I would catch a 15 minute ferry to the other side of the bay. This ferry was still waiting for me.

Since this was a short crossing the ferry crew did not even strap down Emi. I was kind of surprised. I was wondering if they were just playing games with the foreigner, but no, no one came to strap down Emi. 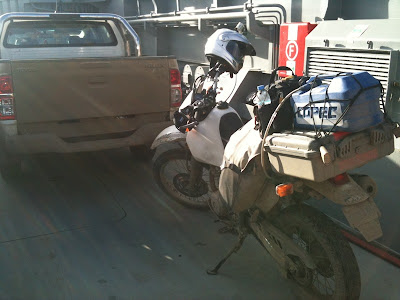 While we were in transit I got off Emi to take this picture. As we crested a wave Emi was rocked and almost fell over. I decided that I should sit on her to hold her steady for the remainder of the crossing.

After crossing the Straight of Magellan I headed west and south along the bay. 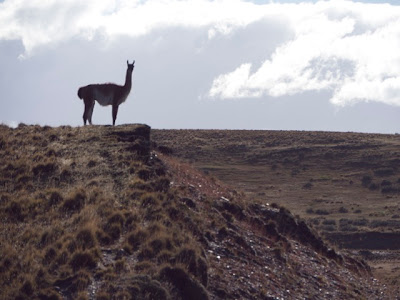 I came to an intersection. Staring at me from across the road and up on a plateau was this guanaco. It was all by itself... just standing there... staring at me... after about 2 minutes it left... then I left.

The road was asphalt, but the wind really started to pick up. I leaned into the wind to keep my bike straight. Also, I employed the technique of sticking leg out to act as a sail to capture the wind...I call it the chicken wing technique. It was a pretty uncomfortable ride for 3 hours.

What started out as a nice ride in the dirt during the morning turned into a brutal ride against the wind.

I did see some more guanacos.
And some nandus.

I arrived in Punta Arenas at about 8pm. It was already dark. I found a hostel and found the bed. It had been a long day, but I reached my destination. I was happy.