In Tierra del Fuego there is a legendary river called the Rio Grande. People come from all over the world to fish this river. They will pay anywhere from $7000 to $10000 for 7 days of fishing and lodging at one of the numerous estancias (lodges) along the river. Most of the best fishing spots are located on these estancias and you have to pay to play. They are usually rewarded by catching a sea trout that can weigh in at around 30 to 40 pounds. That's a huge fish!
Since I was in the area, I decided that I would have to try my luck. 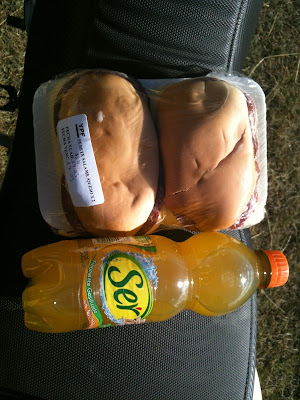 I loaded up on some supplies...a salami sandwich and some orange juice...and headed down the road. 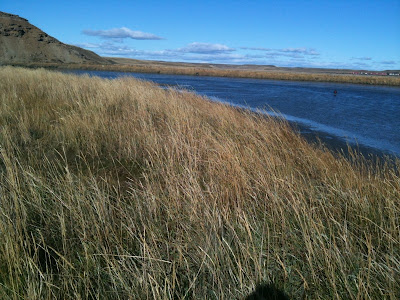 I found a public access spot along the river near the highway. 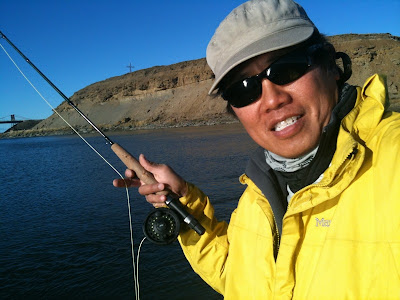 It was a cold and windy day...not idea for fly fishing...but hey...I was willing to suffer for the cause.
The area that I found to fish was near a steep embankment. When fly fishing one has to cast forward by first casting backward...it is called the back cast. Since there was a steep embankment behind me I had to use a strange technique of using a forward cast as my back cast...then flicking my back cast as my forward cast. Sound confusing...it is a bit awkward...but I had to use this technique to a avoid snagging my line during my backcast.
Check out this short video in which I demonstrate this technique...although rather poorly.
The strong winds and the unusual location from which I was fishing caused me problems all day. My line was getting snagged on trees, grass or you name it. My line was flying all over the place and often ending up in knots. It really made me realize how much I have to learn about fly fishing. 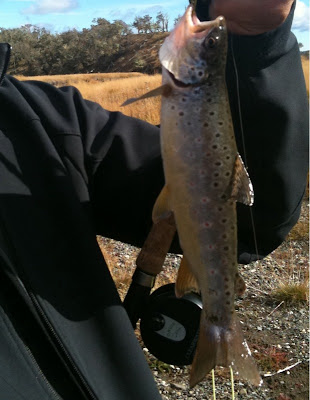 I did end up catching one small rainbow trout from the Rio Grande. It was not a whopper...but it was something.