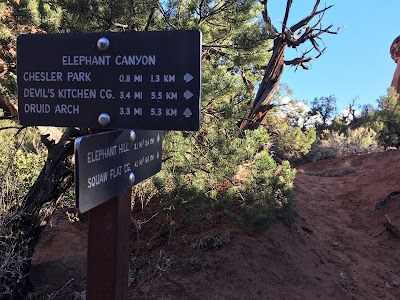 Our hike through the Canyonlands continued. The tentative plan was to hike a loop through Chesler Park, then if we had the time and energy we would continue on a route toward the Devil's Kitchen, then back to Elephant Canyon and EC1. The Chesler Park route would be about 7 miles and the Devil's Kitchen would add an additional 5 miles for a total of about 12 miles. 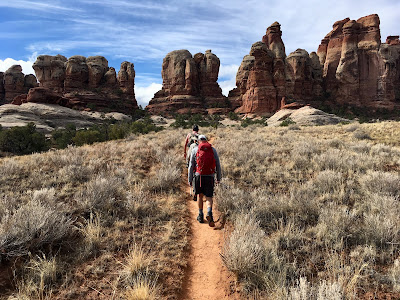 For the past few days the needles were in constant view as a backdrop. Today we would be walking through the needles. 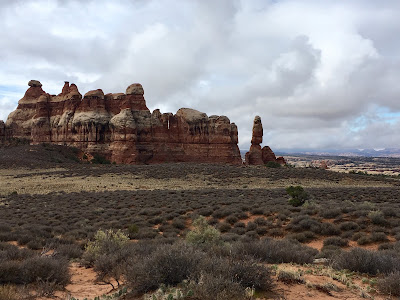 We exited Elephant Canyon and hiked across a high plateau toward the needles. 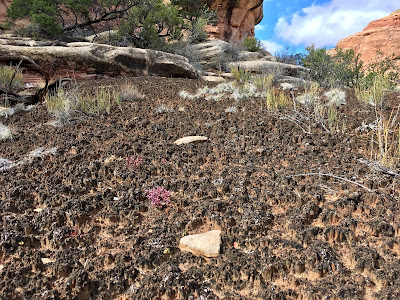 While traveling through this high desert plateau we had the opportunity to see some unique soil. Much of the ground on the plateau is rock or sand, but there is a soil crust which is a living groundcover that forms the foundation of high desert plant life in the Canyonlands. This black crust is dominated by cyanobacteria, but also includes lichens, mosses, green algae, microfungi and bacteria. Cyanobacteria are one of the oldest known life forms. The Cyanobacteria soil binds together and an otherwise unstable surface becomes very resistant to both wind and water erosion. 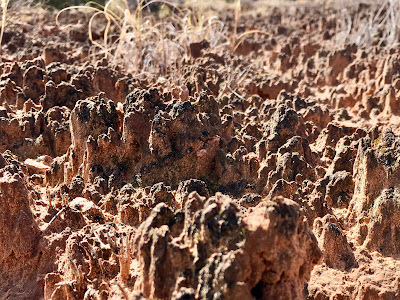 Human activities negatively affects the presence and health of the soil crust. Walking over the live soil, especially when the crusts are dry and brittle, causes compression and long lasting damage. Impacted areas may never fully recover. Under the best circumstances, the cryptobiotic soil may return in five to seven years. Damage done to the sheath material, and the accompanying loss of soil nutrients, may take up to 50 years to recover. When hiking through the Canyonlands it is recommended that you stay on the trail and avoid trampling any of the live soil. 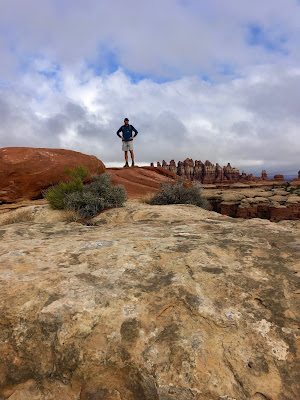 We scrambled over some slick rock and came upon a mountain pass. 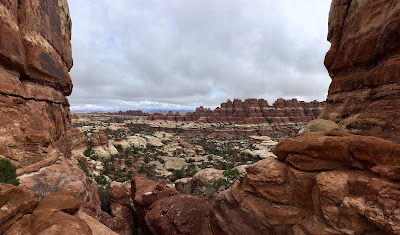 We went over the mountain pass via a saddle and entered into Chesler Park. It was as if we had walked into a valley of giants. 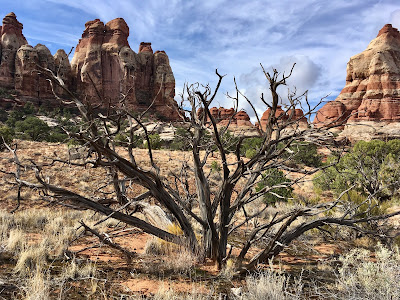 The Needles surround us. They stood at between 400 to 500 feet tall in my estimation. 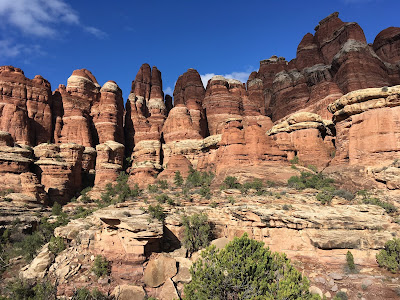 Up close we had the opportunity to clearly see the striations in the rock layers - red, white, orange, amber, caramel, rust, marigold. There were too many colors and layers to count. 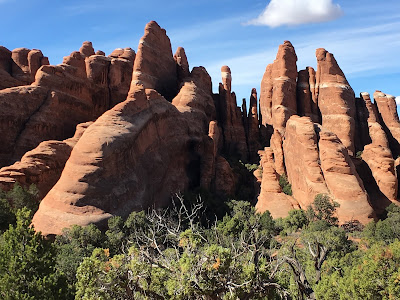 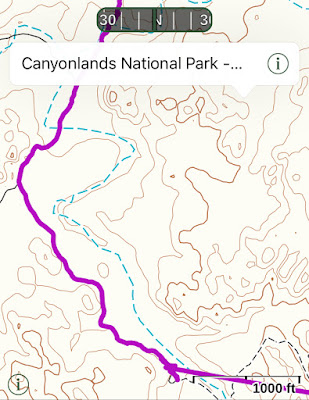 As we were preparing to start hiking again a husband and wife approached us. They appeared a bit distressed and asked us for directions. They were arguing with each other over which route to take. A couple of the guys in our group tried to help the couple and provide them directions, but they were so distressed that they were not really listening. A guide from the day hiking group was present so he provided them a route. He showed them an easy direct route that would take them along a dirt road and that would eventually meet up with the trail. (See the purple line above)

The guys in our group heard these directions and were convinced that it was the route that we should take too. I had a different opinion because I had researched a route that followed the true trail and would take us through a canyon. (See the blue dashed line above) Also, in additional to my paper map I had a trail navigation app called Gaia GPS that had topo maps. I pleaded with the guys that we should take the trail indicated by the dashed blue line because it would pass through the canyon. However, they were convinced that we should follow the lost people. 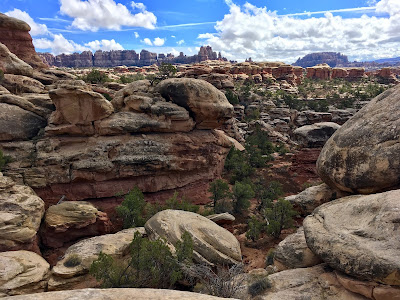 We ended up following the lost people along the dirt road. From the dirt road, I kept looking toward the spires and the canyon wondering what we were missing. After about a mile of hiking the two trails converged. At this point it was confirmed, we had not taken the road less traveled. ;(

I was not a happy camper. I was actually very disappointed and pretty upset. I was convinced that we had just walked around one of the most scenic sections of Chesler Park and the Canyonlands.

We continued hiking. I was still perturbed, but I decided that I could stay upset or try to make the most of the situation. I did decide at this point that in the future if the group decided to take a path with which I did not agree, I would follow my own path. 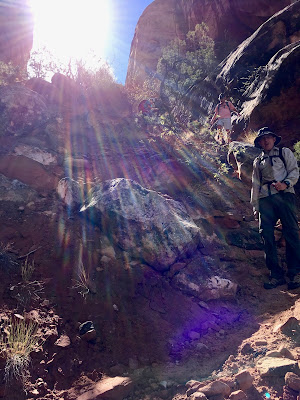 As we were exiting Chesler Park we had to descend down some switchbacks. It was now past noon and the sun would be at our backs for the rest of the day as we hiked northeast towards the Devil's Kitchen. 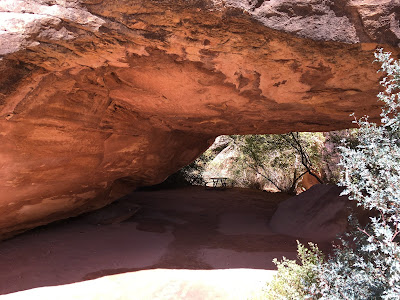 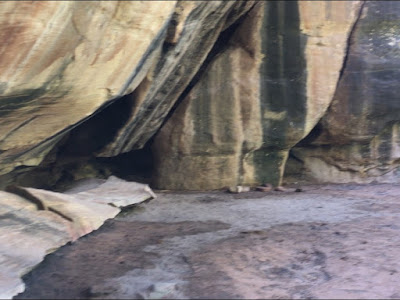 After walking under the overhang you entered a natural alcove. On one side there were massive stone walls. 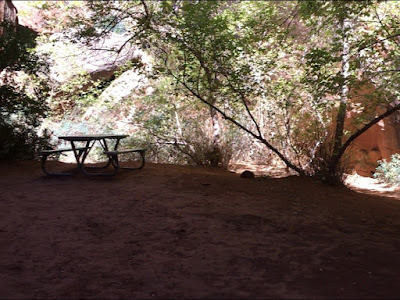 On the other side there was an open area may 50 feet in diameter with some small trees growing around the edges. It felt as if I had walked into an atrium. The temperature was cooler and more humid that the temperature of the open plateau. It reminded me of being in a temperate rain forest.

After we departed the Devil's Kitchen it was about a 3 mile hike back to our campsite at EC1. 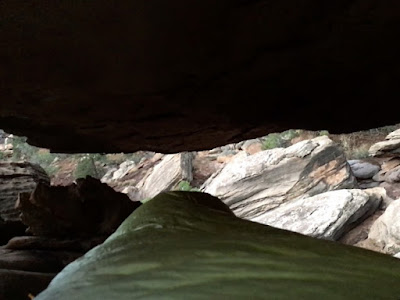 We returned to the campsite a bit hungry, a little tired, but all of us were in awe at what we saw on our hike. After dinner, we watched the stars emerge from the night sky. We felt the cold air move in. Then we each retreated to our respective tents for a time of reflection and dreaming.