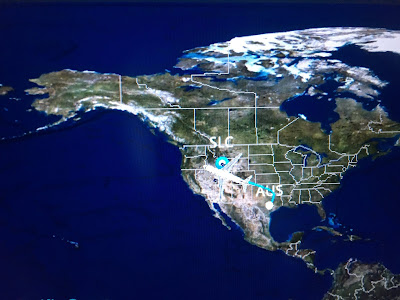 The adventure begins with the idea to travel to Utah to hike, camp and backpack in and around Canyonlands National Park. Three of my friends, Brian, Dave, Kevin and I, flew from Texas to Salt Lake City, then drove four hours to Dead Horse Point State Park. We planned to use Dead Horse as a basecamp for a few days to explore some of the surrounding natural areas.

The park is so named because it is believed to have been used by cowboys in the 19th century as a natural corral. Unfortunately, the area is so demanding and desolate for much of the year that the horses often died of exposure.

The area was also used in the 1991 film Thelma and Louise for the final 'Grand Canyon' scene in which they drove their 1966 Ford Thunderbird over the cliff. 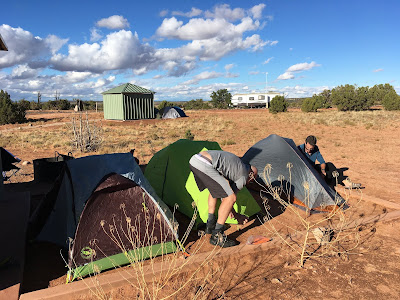 Upon arriving at Dead Horse Point State Park we set up our first campsite at the new Windgate Campground. The campground was well laid out and had some of the cleanest restrooms that I've ever seen at a campground. 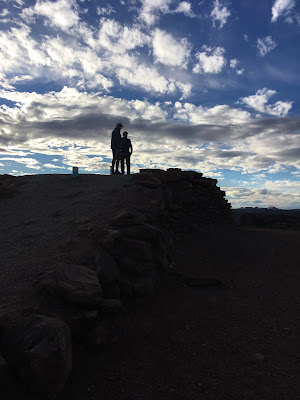 We then set out for a short hike to look around the park and find a particular scenic overlook. 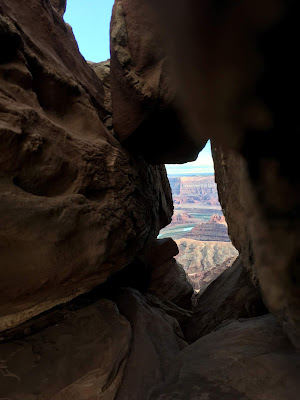 Peering through a stone window, I caught a glimpse of what lie ahead. 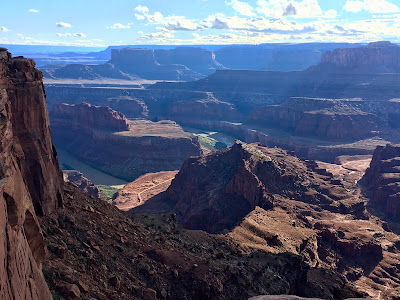 This is a famous scenic view of the Colorado River at Dead Horse. The river makes a dramatic horseshoe shaped bend and double backs on itself. 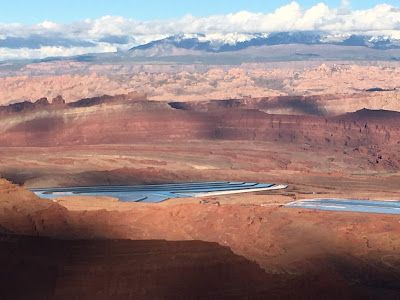 An eastward view at the park revealed some potash mining, mesas and mountains. Potash refers to potassium compounds and potassium-bearing materials, the most common being potassium chloride. The mountains in the background are the La Sal Mountains. 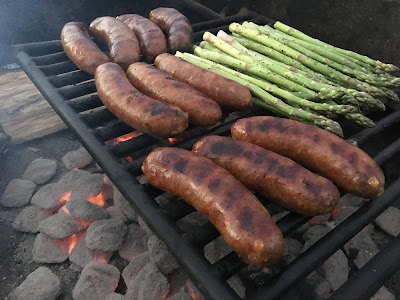 After our short hike of Dead Horse we returned to our campground and cooked our dinner of sausage and asparagus over a campfire. 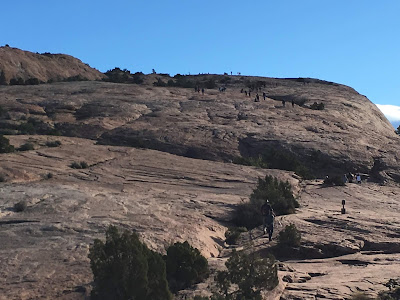 The next morning we woke up early, piled into our van and headed to Arches National Park. We drove straight to the trailhead to check out one of the most distinguished features of the park - The Delicate Arch. The hike began with a steep climb up a slick rock hill. 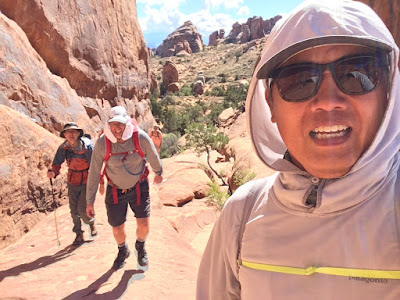 The weather started to warm up as we made our way on the trail. The early morning temperature started at around 40 degree Fahrenheit and warmed up to about 75 degrees. It was actually great weather for hiking. It was sunny and with a cool breeze. There was not much shade along the trail, so if you visit in the summer... beware. 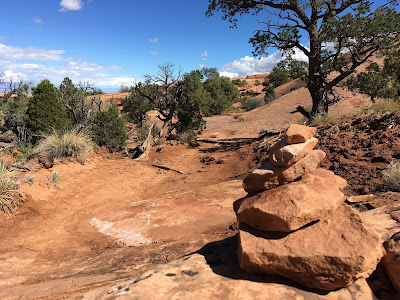 In Arches National Park and other Utah parks the trail often passes over expanses of slick rock areas. There are not an abundance or trees nor soil to post a sign, so the common way to mark the trail is to stack rocks on rocks to create cairns to identify the route. Follow the cairns to follow the trail. 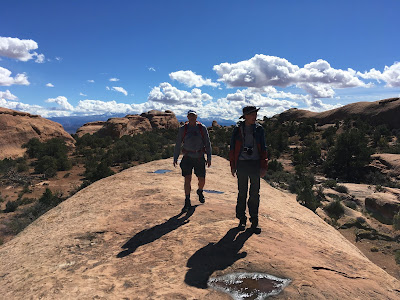 Near the top of the hill the views started to open up. 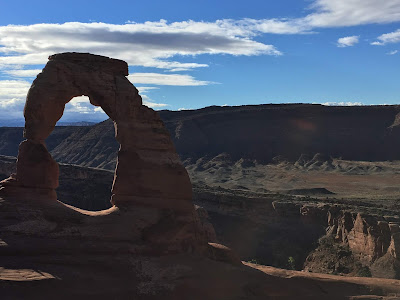 After hiking for about two miles we came into view of The Delicate Arch.  The Delicate Arch is 60-foot-tall (18 m) freestanding natural arch. It is perhaps the most widely recognized landmark in Arches National Park. It is formed of Entrada Sandstone. The original sandstone fin was gradually worn away by weathering and erosion, leaving the arch. 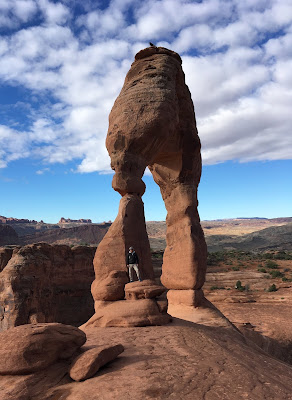 Here's a different angle and perspective of The Delicate Arch. That's me standing on the stone pedestal. And that's a black raven perched on the top of the arch... ominous. Because of its distinctive shape, the arch was known as "the Chaps" and "the Schoolmarm's Bloomers" by local cowboys. Can you see "the chaps" from this perspective? 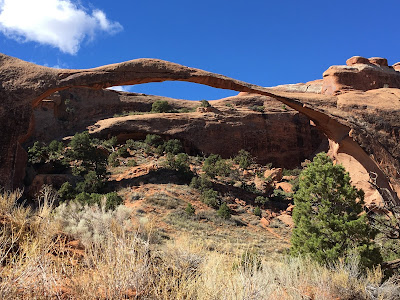 We then traveled to a different area of the park called The Devil's Garden. We decided to hike a loop trail that would encompass about seven miles. Along the trail we came across a number of amazing arches. This rock formation is called The Skyline Arch. 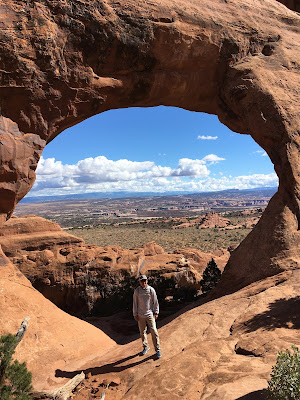 I believe that this arch is the Wall Arch. 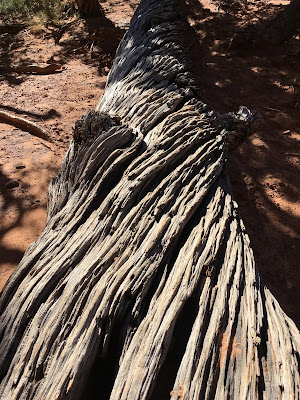 People from all of the world travel to Arches National Park to see the stone formations and arches. I found this twisted tree quite fascinating. 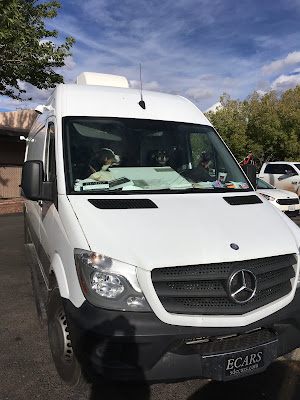 After a full day of hiking and exploring we headed to the nearby town of Moab for dinner. Parked at this cafe was a van full of dogs. #vanlife #doglife #dogsthatdrivevans 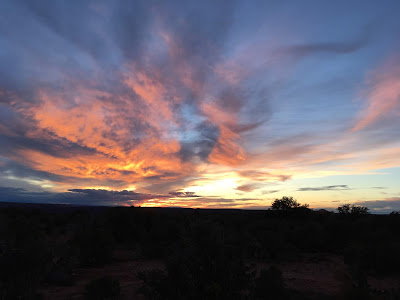 After dinner we returned to our campsite at Dead Horse and settled in for the night. We were treated to this warm sunset, but in reality the night temperature was quite cold. As the sun set a cold front passed through. In the middle of the night there was a strong rain and wind storm and the temperature dropped down into the 30s.

Go to the Next Chapter (Part 2)