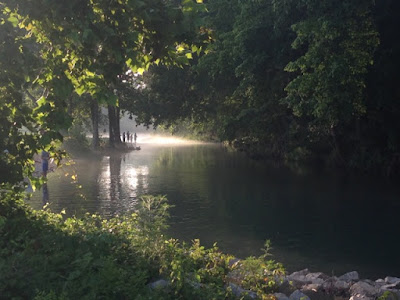 From Bentonville I planned to travel through Missouri. 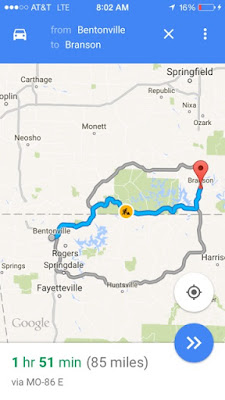 I really did not know where to go or what to do, so I asked for some recommendations on my Facebook page. First, I was told that Branson, Missouri might be worth a visit. Apparently Branson was notable for having a number of venues that offered Las Vegas style shows and musicals. In all honesty I'm not a huge fan of shows and musicals. I mean, they are alright, but I typically prefer to pass my time in other pursuits. However, I'm a strong believer in experiencing new things. So I charted the course in my gps and started driving toward Branson. 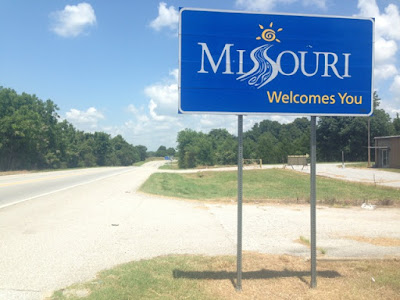 I soon crossed the board of Arkansas and Missouri and was greeted by this sign. Missouri Welcomes You. It's always nice to be welcomed. 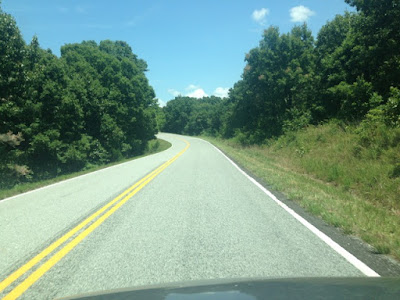 The color of the asphalt changed from a black to a grey. The road was still twisty. There were fewer mountains, but probably more farmland and rivers. I eventually reached Branson.

Near the entrance to the city I saw a sign for a Tourist Information Office. I pulled over and stopped at the office. It was a pretty nondescript building with a few posters hanging on the outside that were promoting the local shows. I noticed that there were posters for a musical, a magic show, a dance performance and a comedian. I thought that maybe I would check out a comedian. I entered the office and there was a man behind the counter. He greeted me and inquired how he could be of assistance. I told him that I was just passing through the town and I was told that I should check out a show... so here I am. He pulled out a folder that listed a number of shows. He started going down the list and mentioned the name, type of show and start times of each show. I was thinking that there might be a performance by Cirque du Soleil, Celine Dion, Penn and Teller, maybe Jabbawokkeez or Wayne Newton. However, I had never really heard of any of the shows that this man was mentioning. I inquired about the price of the shows. They ranged from about $20 to $100. It seems that I had already missed the early performance, but there were shows later in the evening. I was not prepared to drop $100 on some show that I had never heard of. I asked if I could just take a few of the brochures and think it over. He obliged.

I asked the man, besides the shows, what else was there to do in Branson. He mentioned that there was a wharf near the river with a number of restaurants and shops. I was hungry so I thought that I would find something to eat and deliberate my options of shows.

I drove down the Main Street for a while and eventually found the wharf. I was pleasantly surprised to find that there was quite a bit of activity. The wharf was not an old shabby pier as I had expected. It was a modern and clean boardwalk. There were a number of restaurants and stores. I found one store in particular that caught my eye. 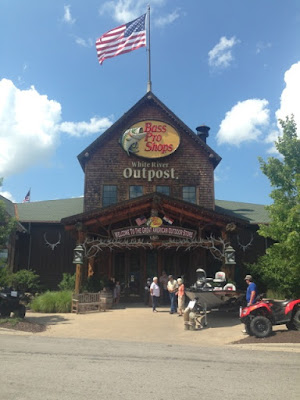 At one end of the wharf there was a Bass Pro Shop. Bass Pro Shop is a massive retailer of fishing and outdoor gear. There is a similar store in Texas that I visit on occasion. I decided that I would check this location out to see how it compared. 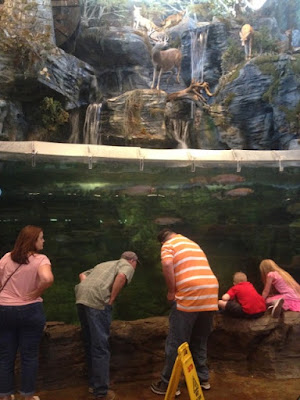 One of the notable features inside the Bass Pro Shop was a huge aquarium in the center of the store. This aquarium was really the size of a small swimming pool, perhaps 30 feet long x 20 feet wide x 10 feet deep. Inside there were a number of huge freshwater fish swimming around - a few sunfish, bass and catfish. On the outside of the aquarium there were rock structures that simulated a natural cove with a waterfall. People go to Bass Pro Shops to shop, but they are entertained by the massive fish aquarium - it drew quite a crowd. 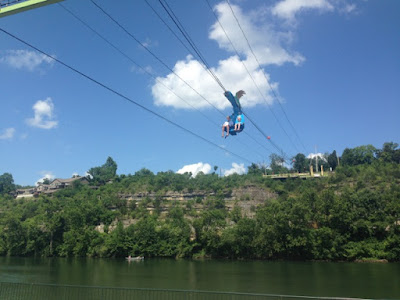 As I walked around the boardwalk, I came across this amusement ride. There were cables stretching across the river and on the cables there was a dangling chair. People would board the chair on the near side of the river. The chair would travel slowly to the opposite side of the river. Then a mechanism would release and the chair and people would be slung back to the near side of the river. It was like a zipline with a chair. There were mostly kids riding the zipline so I decided to pass. As I was walking around I received a message from my friend Dale that I should check out the Roaring River while I was in Missouri. Wow, that sounded cool. I didn't really know what it was, but a quick search indicated that it was a recreational park and river to fish. I was hooked. I looked up the location on the map and I realized that I had driven right by the river on my way to Branson. I weighed my options. I could stay in Branson and go watch a show for $100 or I could get in my car and drive an hour in the direction from which I just drove... just to go fishing. Simple decision really. 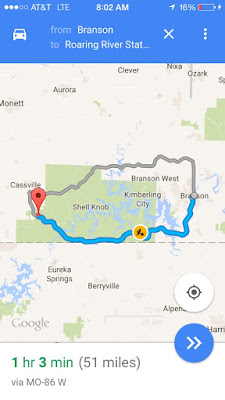 I backtracked toward the Roaring River. 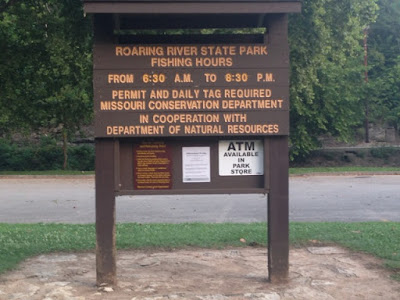 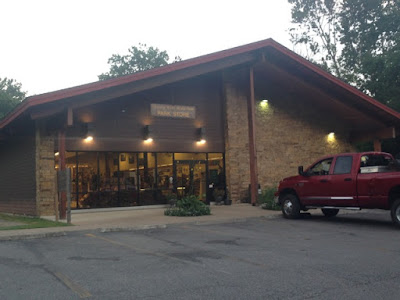 There was a store at the park that sold fishing gear, souvenirs and fishing permits. The river had regulated hours of operation and only permitted fishing between the hours of 6:30am to 8:30pm. It was already late by the time that I arrived, so I decided that I would forego fishing for the day, but would start fishing the next morning. 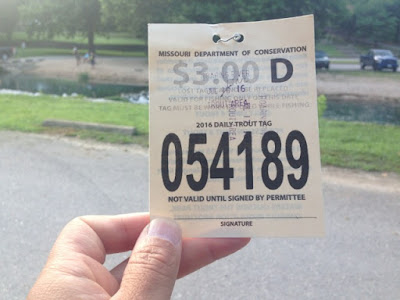 I bought a fishing permit for the next day. 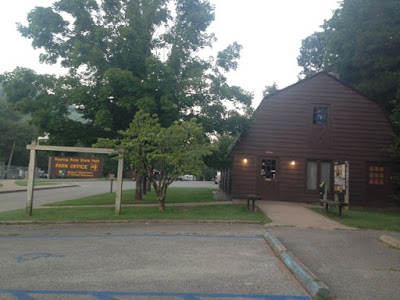 Next, I went over to the headquarters of the camp ground. I inquired if there were any camping spots open. I was told that they were fully booked. Bad luck. I wasn't too concerned because I was traveling around in my car and I felt that I could easily find some area to camp inside my car if needed. 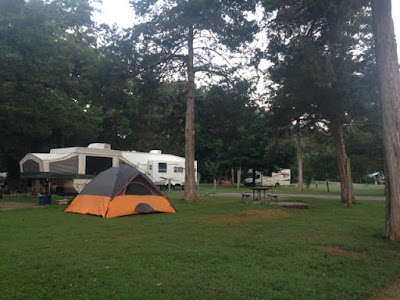 The camp area did look nice. There were some tents and some recreational vehicles spread out amongst the trees. 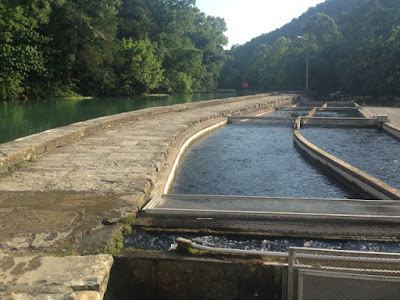 I was told that there was a fishery up the river, so I thought that I would check it out. 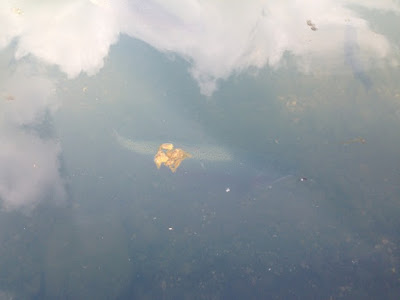 See that fish? This is what spotting fish looks like without polarized glasses. 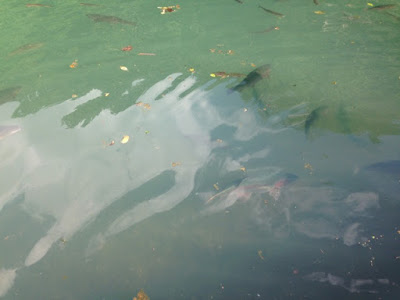 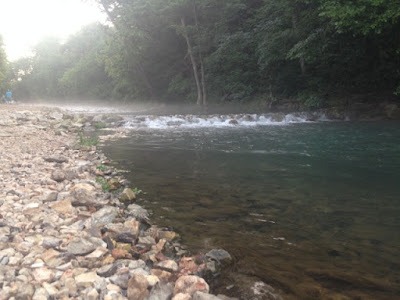 The river had various segments that were devided by little rock partitions. I think the rock partitions helped to divide the fish habitat and also aerate or oxygenate the water for the fish. I never felt like the river was roaring, but it was ripping. 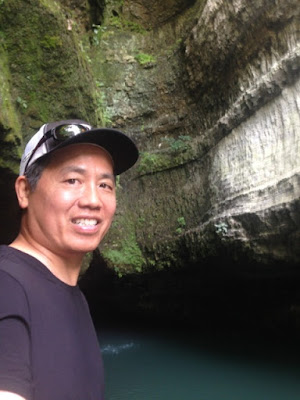 I walked around the fishery for a while and found the source of the river. Apparently the river flows from an underground string that originates from inside this cave. There was no fishing allowed in this area, but there were schools of large fish swimming around the water source. 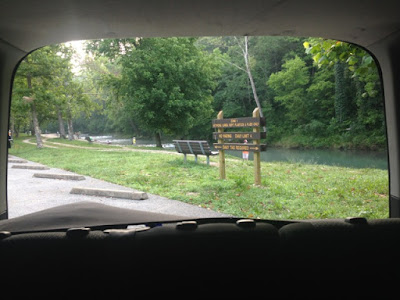 When I travel I seldom make plans and rarely make reservations. It is a very liberating way of traveling. So I often find myself looking for accommodation upon my arrival. I'm comfortable with this style of traveling and I have learned some techniques to improve my chances of securing a place to stay. At National and State Parks I have a little strategy to secure camping spots. People often make reservations months or weeks in advance for car camping spots. I show up either early in the morning or late in the afternoon or evening. Early in the morning, when the reservation office first opens, the staff usually receive some notice of campers that are canceling their reservation or leaving their spot early for some reason. The camp office often makes these spots available on a first come first served basis. I sometimes obtain a camp spot in this manner. Likewise, late in the afternoon or evening, when the reservation office is about to close, they usually have one or two camping spots that they have held for late arrivals. If no one claims the spots before the office closes, they open them up.

So I passed by the camp reservation office at 5 minutes before 8pm, closing time. I walked into the office and inquired again if they had any spots that had opened up. Luckily, they had one spot open that they issued to me. Sweet!

I camped for the night in the park. I woke up early to catch the morning light and the steam rising off of the river. It is typically very quite at this time of the morning. I love it. 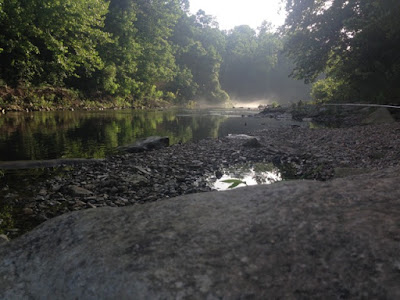 This part of the river was quite tranquil. I found a location along the bank of the river to fish. At precisely 6:30am a siren sounds which indicates that it was now legal to fish. After the siren sounded, the chaos began. 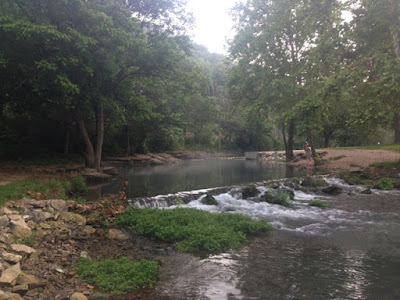 I could spot the fish fairly easily, but I wasn't having much luck catching them. 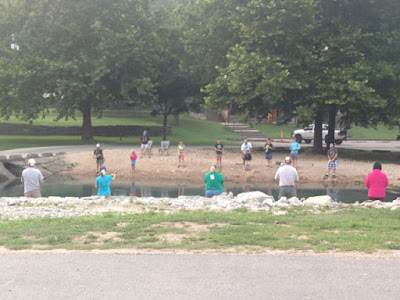 As the morning turned to mid-day there were more and more people that showed up to fish. This part of the river was quite busy with people standing only ten feet apart. I think that the fish in this river were over-pressured. I could drop my fly right in front of a trout... agitate it... but the fish would not strike. It was a nice environment to fish. There were families and friends fishing all along the river. People would fish for a while, then take a break and picnic for a while, then go back to fishing. I engaged a number of locals in conversation. Many of the locals had fished this river for years. Fun for all. 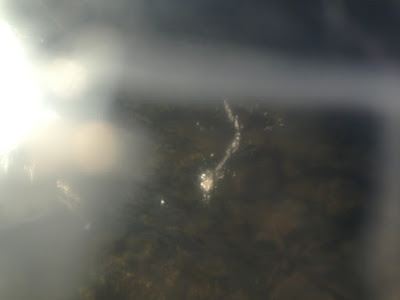 I was able to catch a few fish. This is a really bad photo of a rainbow trout being pulled in. 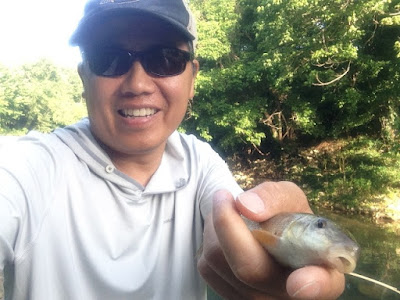 Also, I caught this fish. I had never caught this variety of fish before. Another fisherman that was standing nearby said that it was a sucker fish. However, I'm not sure if the man was referring to the name of the fish or the guy that caught it.

I ended up staying at the Roaring River for two days. I caught maybe six fish. I did not feel like cleaning, preparing and cooking them, so I released them all. Overall, a great way to experience Missouri.