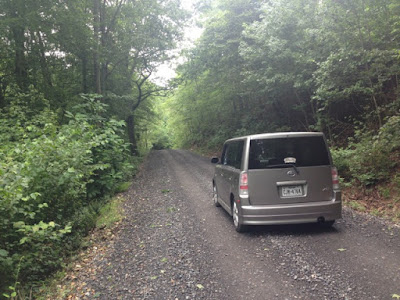 From the Quachita National Forest I continued north. 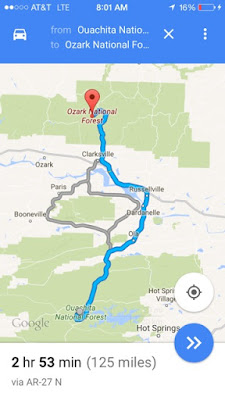 My destination would be a short three hour journey to the Ozark National Forest. Leaving the one forest to get to the other forest would take me along some gravel roads, but soon I was back on the asphalt highway. The highways in Arkansas are like highways just about anywhere - straight and non-descriptive. However, the backroads of Arkansas are twisty and scenic, simply a pleasure on which to drive.

After about two and a half hours of driving on the highway, I turned off the highway and traveled on a side street that turned into a gravel path. Earlier in the year, I visited the Ozarks with my friend Brian and a few of his friends. We saw some sights, went on some hikes and I had a great time. The area that we visited has mountains, valleys, canyon, rivers and waterfalls, but this part of the Ozarks seemed completely different. 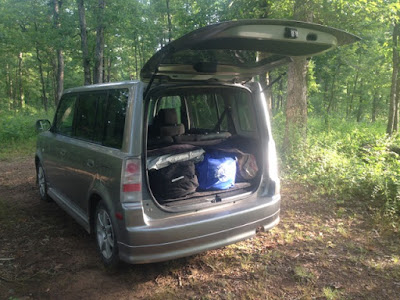 I followed this gravel path for quite a while. I really did not have a destination in mind, I was just following it as deep into the forest as it would take me. I eventually found an area off the side of the pathway to stay for the night. I was pretty much surrounded by a green wall of trees. I was somewhere in the middle of the Ozark Mountains, but to my surprise there were no mountains ridges, no scenic overlooks, just lots and lots of trees. It was late in the afternoon by the time that I arrived, so I ate some fruit and nuts that I had stored in my cooler. Fruit and nuts are pretty much my food of choice when traveling on a road trip. They are easy to transport, can be stored for a long time and to me they are tasty. A banana, an orange and a mix of good nuts and I'm a happy camper. 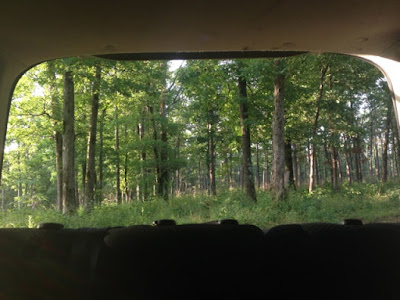 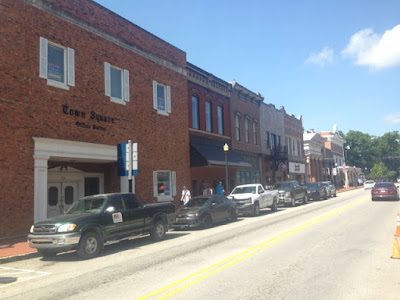 I camped for one night in the Ozark National Forest. On my way out of the area I stopped at a gas station to fill up with gas. I asked the attendant if there were any sights to see around the vicinity. He said that the town of Bentonville was probably the biggest attraction. Really? I asked, Why? He said because of Walmart... because Bentonville was where the original Walmart was founded. He said that there is now a museum to visit. Hmmmm, interesting. I thought that it might be cool to see a little Americana. I headed toward Bentonville. 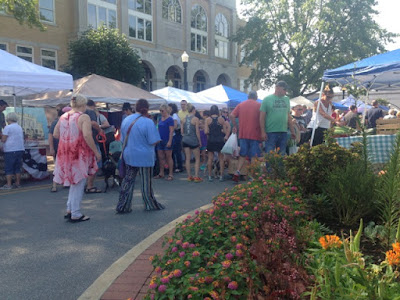 As I entered the town there were signs that directed me towards Walmart. The signs seemed to be guiding me toward the center of town. I could not see the Walmart, but what I could see was that there was a bustling street market happening. The street market was pretty much occupying the entire town square. The traffic was restricted from driving through the center of town, so I decided that it would be better to just park my car and check out the local event. I found a parking spot just adjacent to the town square. I was pretty happy with myself. Then I took a stroll around the market. 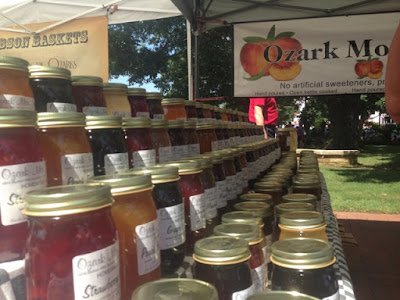 There were some booths with jelly and jam. 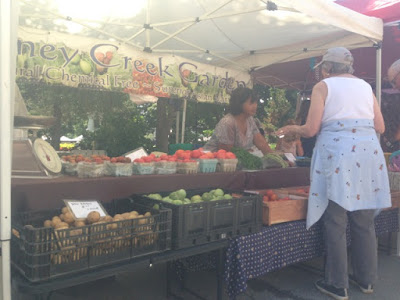 There were some booths with fresh vegetables and fruit. 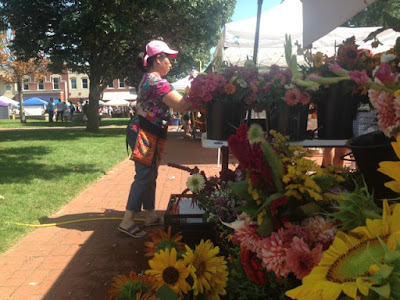 There were even some booths with fresh cut flowers. One interesting thing that I noticed was that many of the booth proprietors were Asian. I had only been traveling in Arkansas for about 3 or 4 days, but in that time I had not seen a single Asian person. Then, all of the sudden, they were everywhere. I was curious how such a large number of Asian people ended up settling in the town of Bentonville. And why they all seemed to be farmers or selling agricultural products. I did not have the chance to engage anyone in a conversation because I got distracted. As I rounded the corner of the town square I saw this... 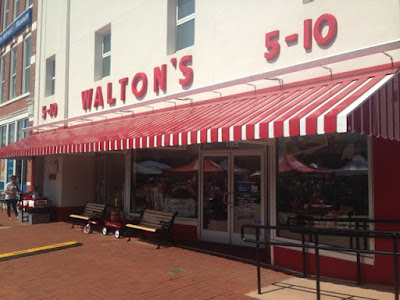 Walton's 5-10, that's five and dime for those unfamiliar with the lingo. Back in the day, small convenient stores were called five and dimes because most of the items in the stores could be bought for 5 to 10 cents. Walton's 5-10 was a successful store that would eventually grow to become Walmart - the largest retailer in the world. 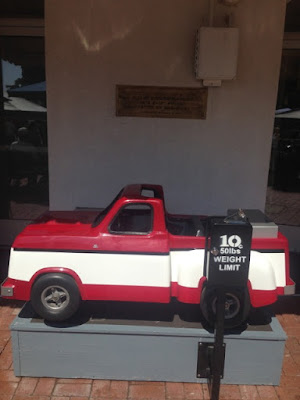 In front of the Walton's store they were peddling nostalgia. These types of kiddie rides use to be prevalent in front of every retail store in America. One parent could go inside the store and shop, while the other parent could amuse the kid with a ride in a kid sized vehicle for the price of a dime (10 cents). While I stood in front of the store almost every kid that pasted by the little truck was begging their parents for a ride. Many obliged, but others directed their kids to go inside the store. 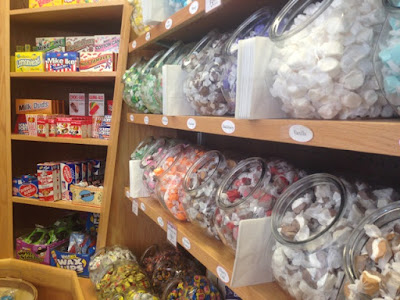 Inside the Walton's they were also peddling nostalgia... I think to the older generation. On one side of the store there were all types of sweets. The treats were predominantly classic candy offerings like salt water taffy, bazooka gum, milk duds, wax lips and items like cracker jacks. Most kids would probably not recognize these types of candies, but their parents definitely would. It was the type of candy with which they might have grown up. 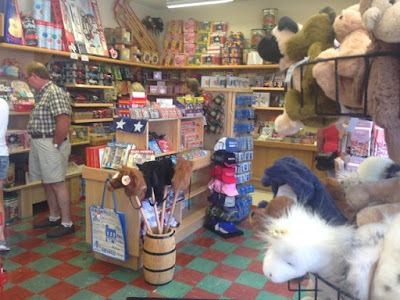 On the other side of the store there were classic toys. There were items like broom stick horses, jigsaw puzzles, magic card tricks, cast iron toy cars and wooden sleds. 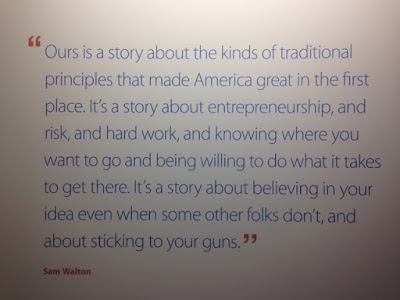 Through a hallway was a museum. There were displays that extolled the vision of the founder and original owner of Walton's - Sam Walton. 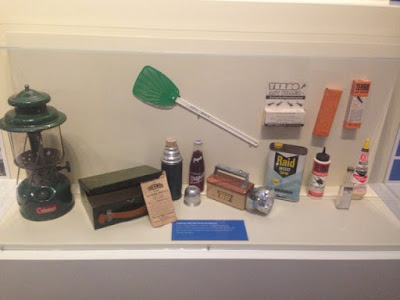 There were displays that contained items that were sold in the original Walton's like camping gear and household items. 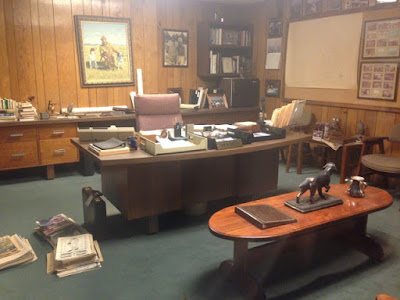 There was a display that modeled Sam Walton's office. It provided a little insight into the things that were important to the man. 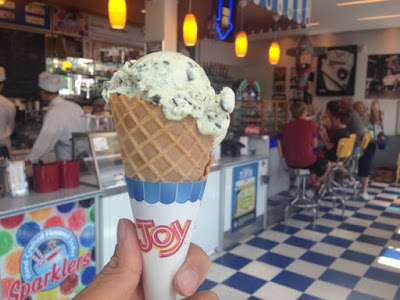 At the exit of the store and museum there was a classic style ice cream parlor. I was hoping that maybe they were only charging 5 cents or 10 cents for an ice cream cone, but I believe that this ice cream cost me $1.50. One thing that is evident about Walton's and Walmart is that they are very aware of how to price items. 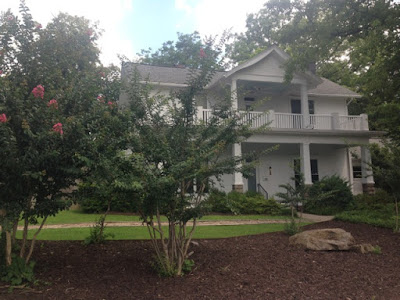 When many people think of Arkansas they think of the Ozarks and the natural areas within the state. When other people think of Arkansas they may think of small towns, slow speaking locals, trailer parks, backward places and hillbillies. Well, I suppose that maybe you can find some backward places and hillbillies. There are certainly some underdeveloped areas in the state. However, what I discovered during my time in the state were incredible rustic natural areas with nice friendly people. And, I found some places like the communities of Bentonville. As I was leaving Bentonville, I passed by a neighborhood with some stately manors like the one above. I can only speculate that the success of Sam Walton and the success of Walmart had something to do with the success of the surrounding community. I often marvel at how some people are able to transform simple concepts into complex businesses. How can one man transform the concept of a five and dime store into a mega commercial operation like Walmart that impacts economies. I reflect back on the words of Sam Walton...

"Ours is a story about the kinds of traditional principles that made America great in the first place. It's a story about entrepreneurship, and risk and hard work, and knowing where you want to go and being willing to do what it takes to get you there. It's a story about believing in your idea even when some other folks don't, and about sticking to your guns."

Here's a little video about Sam Walton and the history of Walmart (10 minutes). 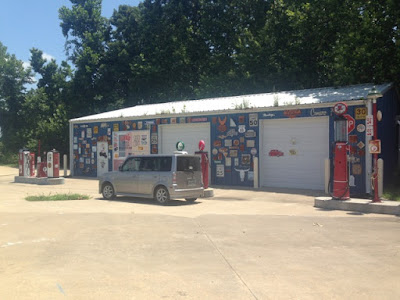 I continued my journey and headed north. I came across this business that appeared to be a gas station or mechanic shop. 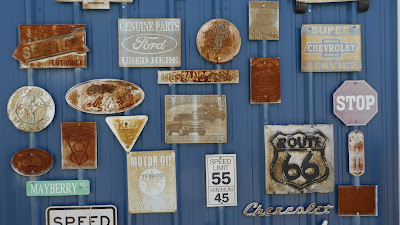 It had some classic automotive emblems posted on the walls. 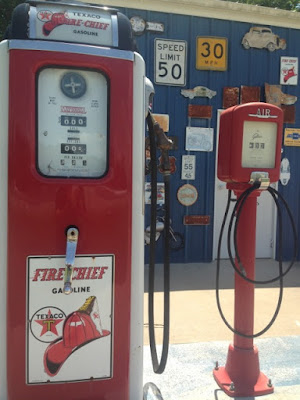 And this vintage gasoline pump ready for service. The shop was closed, so I was unable to find out more about the history of this place or if it was actually in operation. Irregardless, it was a blast from the past. 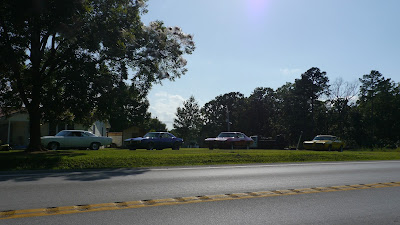 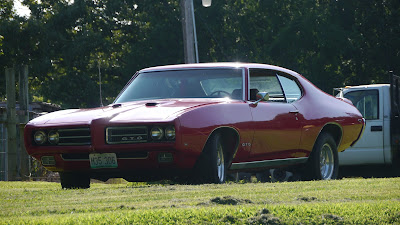 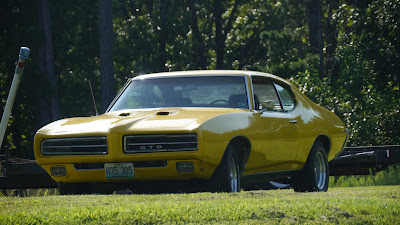 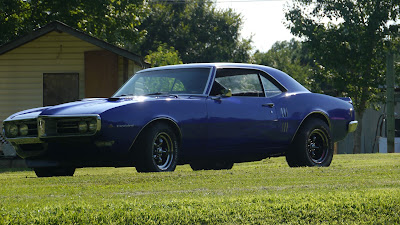