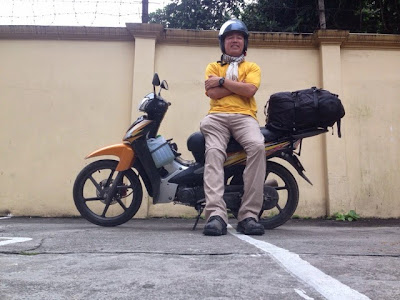 To start this adventure I needed a few things. First, I needed a motorcycle, so I bought a used one for US$420. 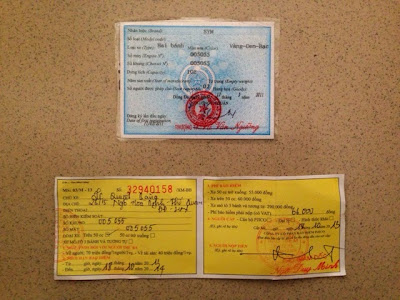 Accompanying the moto was a registration card and insurance card. 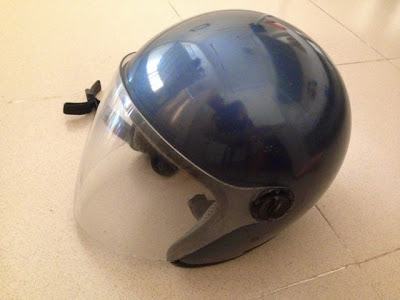 I obtained a moto helmet. Helmets in Vietnam are required, but I do not think that safety certified helmets are required. Many of the helmets that I have seen on the streets offer the very minimum of protection. They are more of a fashion statement than protection. I was fortunate to find a Protec helmet with full face screen. I would say that it was the best of all the bad options. The value of the helmet was about US$40, but the protection of my head and face was priceless. 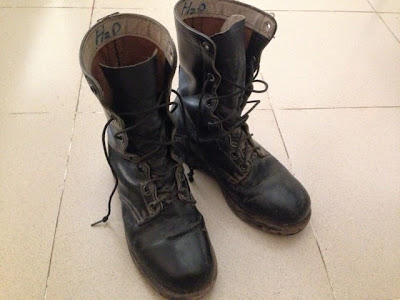 Next, my friend introduced me to a friend that sold new and used camping and motorcycle gear. I was able to buy these used combat boots for US$15. In Vietnam many people ride motorcycles in regular shoes or flip flops. I wanted to go home with all my toes, so I felt that these boots would be a worthwhile investment. 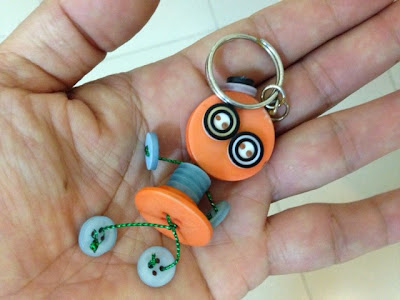 The morning that my new adventure was beginning my friend Quy Nho presented me with this little button man. Some motorcyclists attach little bells or trinkets to their motos to bring them good luck and safe journeys. I've never done it, but I decided to attached the button man to my moto. 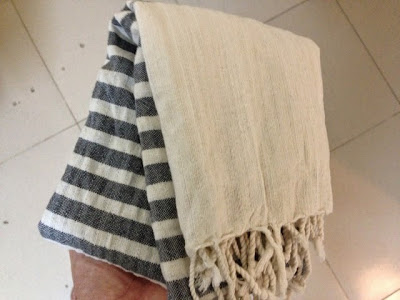 As I was pulling out of the garage, another friend Da pulled up and presented me with this scarf. He said that it might come in handy in the mountains where it could get cold. With these two gifts I felt that I was off to a good start. 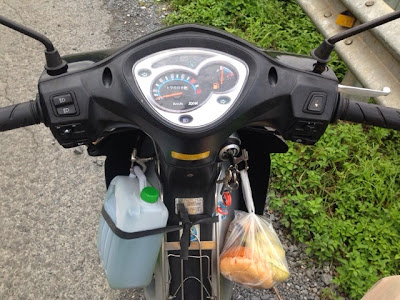 I was not sure about my route nor distances that I would be covering, so I bought a 3 liter container to carry extra fuel. And I bought some bread and pastries as emergency food. I also carried a bottle of water in my rear bag. 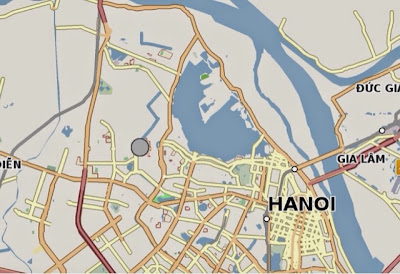 Leaving Hanoi was actually a little tricky. I got lost in the maze of highways, but eventually found my way out of the city. 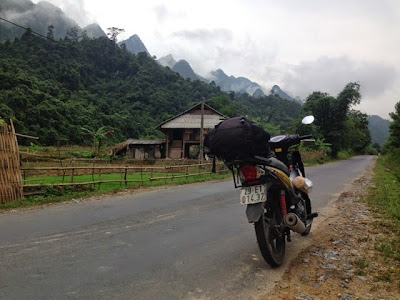 Once I got free from the city the traffic lessened and the views opened up. 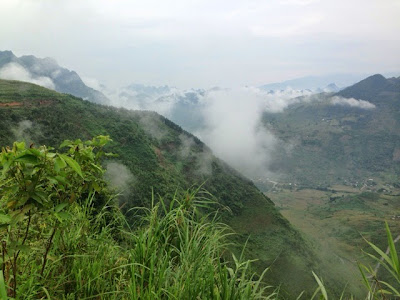 The north is known for mountains, agriculture and the ethnic hill tribe groups. 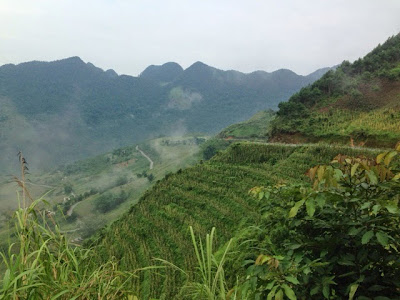 The terrain is so mountainous that to take advantage of the soil and to farm the land, the ground is often terraced. 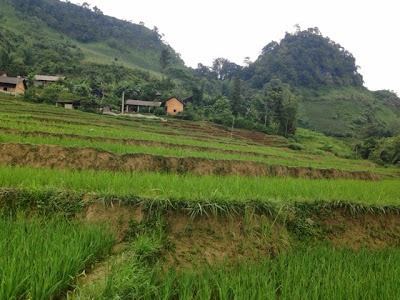 Some common crops include rice, coffee, tea and vegetables. These are rice fields. 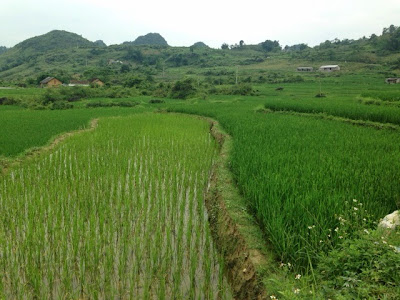 Carpets if green... It appeared that the rice fields in this area were maticuously  cared for sculptures. 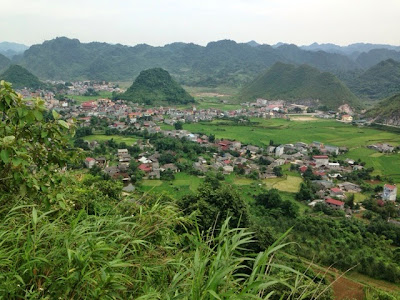 In some of the valleys there were mid-sized towns. But most of the towns and villages that I passed along the way consisted of 20 to 30 home structures. 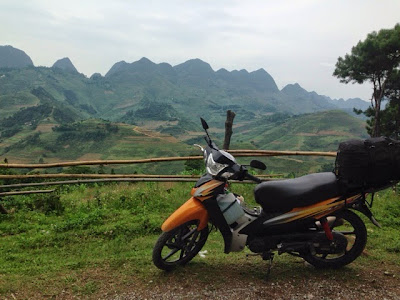 I took a few breaks to rest and take photos, but I was trying to reach the town of Ha Giang on my first day.

About 8 hours into my ride I was stopped at a police check point. An officer was standing in the middle of the road and motioning to me with his baton to pull over to the side of the road. The officer started to talk to me, but I pretended to not understand what was going on. Actually I may not have understand what he was saying in Vietnamese, but I completely understood that a shakedown was about to occur. He was indicating that when I turned left at the prior intersection that I did not turn on my turn indicator. Well, if you've ever seen driving in Vietnam, his happens all the time with far more risky behaviors occurring everywhere. Irregardless, I was busted. A second officer motioned for me to approach the cab of his car. I did. At that point he wrote on a piece of paper the amount of 1,000,000 dong. That would be my fine... about $50. I continue to act as if I could not understand him, even though I completely understood what was going on. Eventually the first officer pulled out his iphone and thanks to google translator wrote and translated that I had turned without signaling, the fine was 1,000,000 dong (US$50) and that my moto would be confiscated if I did not pay the fine. Isn't technology great. My little charade was finished. I was busted by technology and could no longer pretend that I did not understand. After about 30 minutes of trying to argue my way out of the ticket, I decided that I was wasting time. I then told google translator and the officer that I was sorry if I failed to signal, that I was just a tourist and asked if I could pay half the fine because I was unaware of the rules of the road. The two officers glanced at each other, gave that look of approval and shook their heads in agreement. I paid the 500,000 dong (US$25) fine. Asked if I was free to go. They motioned yes. I smiled at them wryly. And off I rode. I did not even wait for the fictitious ticket to be issued.

I thought to myself that this little motorcycle adventure could get expensive if I were to run into too many police stops. I continued on my way unfazed with the realization that at least I would have an interesting story to tell my blog followers. It would be the price I would have to pay for my readers. 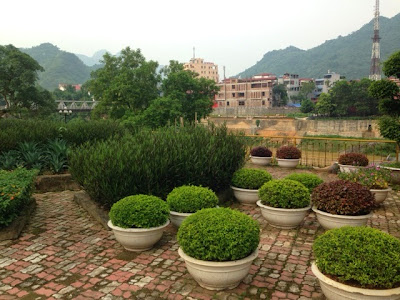 After 2 more hours of riding I arrived in the town of Ha Giang. 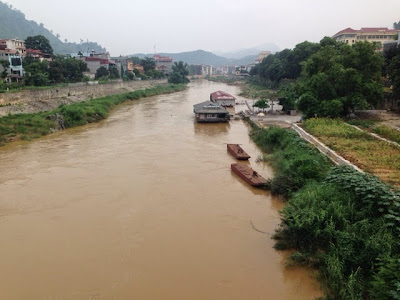 The town sits alongside a chocolate colored river. 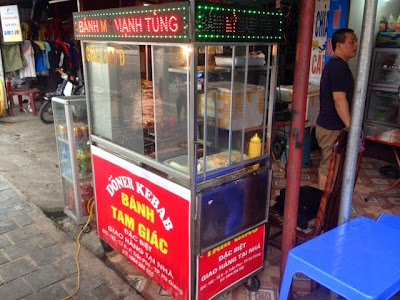 As I entered town I caught sight of this doner kebab stand. After my initial experience getting lost leaving Hanoi, a 500,000 dong ficticous ticket and a 10 hour ride I thought a doner kebab would be the perfect comfort food. 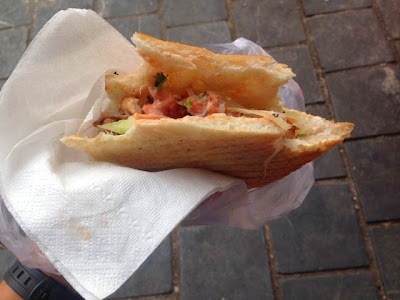 I ordered one kebab and engulfed it quickly. It was average in terms of overall quality, but it tasted pretty great at that moment. So, I ordered a second kebab and finished it just as rapidly. 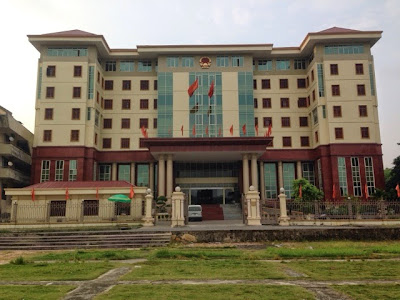 I snapped a photo of this huge government building that occupied a prominent location in the center of town. 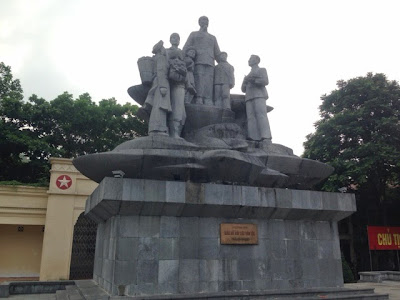 Across from the government building was this large monument of Ho Chi Minh. 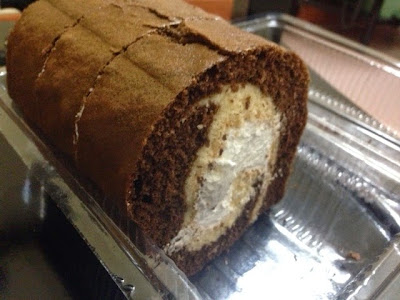 There just so happened to be a bakery close to my hotel. I spotted this roll cake from the street. These types of cakes just happen to be a favorite of mine. I bought a whole chocolate cake and took it back to my hotel room.