Not what I wanted, but what I needed.

It started off as a rough day.  I was running behind schedule and I had not planned out my route.  From Nghia Lo I started down the road and made my way south.  I ended up in the town of Yen Bai. 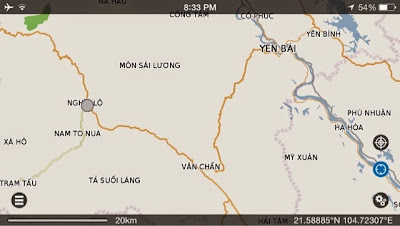 I eventually made my way back one and a half hours to where I needed to be in the town of Van Chan. How had I missed this intersection?

As I was passing through the town I noticed a bicycle shop.  I thought to myself that I should stop and purchase a bicycle tire pump.  After getting lost on a rough road I began thinking that I should prep a little better for these types of situations.  When traveling by motorcycle I always like to have the necessary tools and equipment for roadside repairs.  I had most of the basic tools and two spare inner tubes in case I were to get a flat tire. But I didn't have a pump to inflate the tubes.  So I stopped at the bicycle shop to see if there might be a pump for sell. 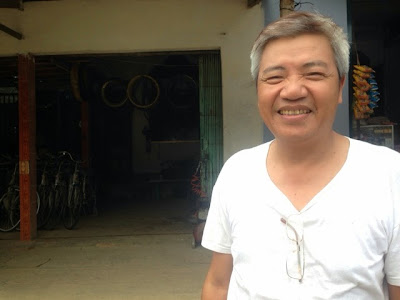 This smiling gentleman came out to greet me.  He could tell that I wasn't his typical customer by the way that I was dressed and the way that I was acting.  I greated him with a hello in Vietnamese.  Then I pointed to one of the tires on a bicycle and made a pumping action with my hands.  I'm becoming an expert at pantomiming.  He understood immediately that was looking for a pump.  He nodded his head yes and showed me a electric pneumatic pump that he had in his shop.  I pantomimed that I needed a small handheld pump.  He shook his head right and left indicating that he did not have one.  But he pointed across the street at a hardware store and indicated that they might have one for sell.  I thanked him and walked across the street to the hardware store.  I called out, but no one responded.  Then the gentleman walked across the street and called out for the owner.  The shop keeper emerged.  The gentleman explained that I needed a small hand pump.  The shop owner directed me to one aisle of the store and pulled out a footpump.  I indicated that I was looking for small handheld pump.  The shopkeeper eventually pulled out a bicycle hand to foot pump.  The pump was not exactly what I was looking for, but it would meet my needs.  And it only cost 40,000 dong or about two dollars.  So I bought it.

As I was walking back towards my motorcycle the gentleman made a gesture to me.  He moved his hand as if he were holding a cup and lifted it toward his mouth.  I smiled at him and shook my head... Yes... I needed a drink. I was parched and really beyond just thirsty.  However, I thought that he was telling me that I should go into the small grocery store next door a buy a drink. So I started walking in the direction of the grocery store.  But then I realized that he was actually inviting me for a drink inside his house.  So I turned around and I followed him. 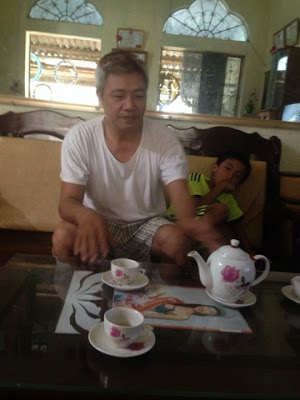 I can only speak and understand about five words in Vietnamese.  But over three or four cups of hot tea I learned a few things about this man and women.

I learned that this nice couple were husband and wife.  I learned that they had one son and these children were their grandchildren.  The television was turned on and the program that was being shown was a program about travel within Vietnam.  So I assumed this gentleman liked travel stories.  I showed him the list of towns in Vietnam that I had visited and was planning to visit.  He seemed to appreciate the journey that I was on.  I think that it is amazing what you can share and learn with gestures and a few words. 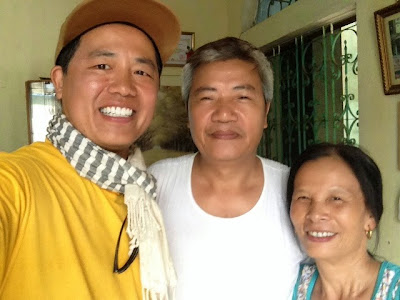 In the end, what became important wasn't about what I learned about this man, his wife and his family. Nor was it important what I shared about myself, my family and my journey.

But at that time and at that place, he gave me just what I needed... humanity.

I do not know if it was the break from riding, time out from under the sun, the stillness of the moment, or the three or four cups of tea that I drank, but when I began to ride my motorcycle I felt very alive.

For the remainder of the day I rode like the wind.