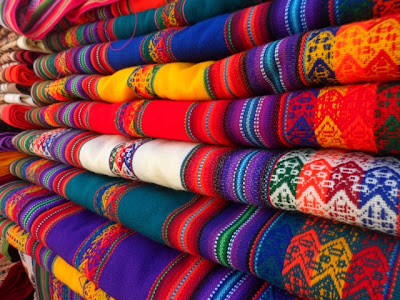 While staying in Sucre, I heard about the town of Tarabuco. The village is known for its beautiful weavings and for having a colorful Sunday market. Typically for the market day, thousands of indigenous people from the surrounding countryside descend on the town in traditional costumes. 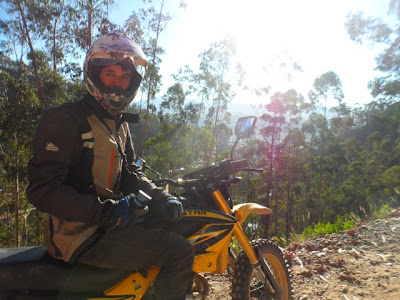 At the hostel in which I was staying in Sucre, I met another motorcycle rider name Russell. We decided to take a little ride to Tarabuco to check it out. 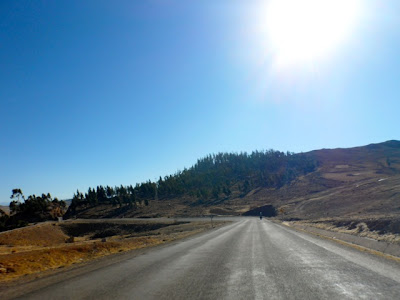 It was a clear and cool day. We rode for about an hour through some rolling hill country. We reached Tarabuco around noon... lunch time. 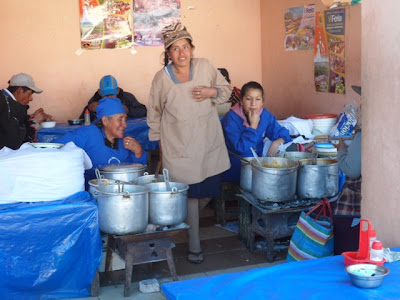 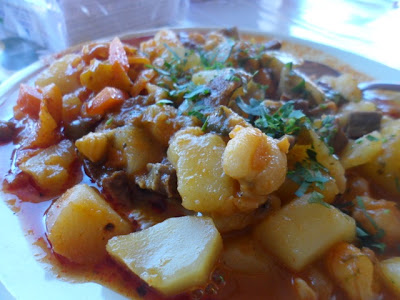 I ordered a heaping portion of pulmón! It was cooked as a stew with some potatoes, beans, carrots, greens and spices. Looking at the stew, one could easily mistake the pulmón for beef or pork.

I took a taste of the potato first. It was good. The sauce was a little spicy, just the way I like it. Then, I found a piece of pulmon. I lifted it to my mouth...took it in.... and began to chew.

Not bad! It was a little soft and a little chewy. It had the consistency of a firm mushroom. I could not really tell if the pulmon had a distinct flavor. I think that it had absorbed most of the flavor of the sauce.

OK, let's hope that I do not get sick later. 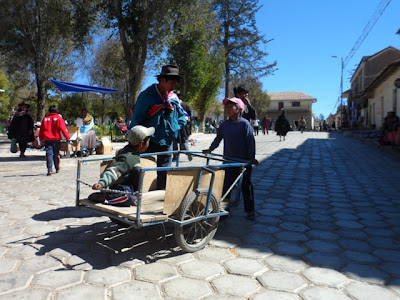 After eating lunch we took a stroll around the village. There was a lot of activity. People were transporting good, vendors were set up along the streets. 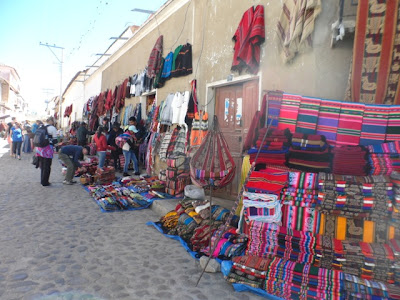 There were predominantly woven ponchos, bags and belts. 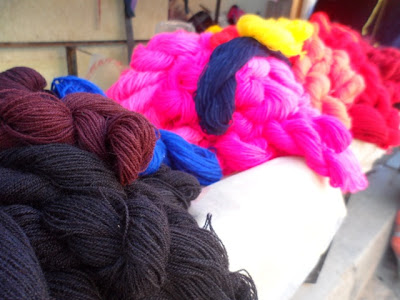 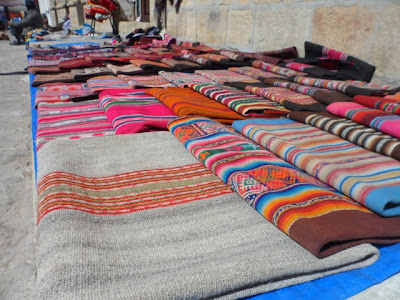 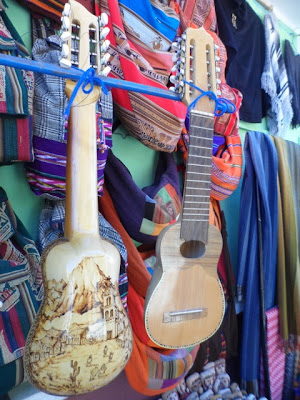 As well I saw a few charangos, which are traditional Andean musical instruments with a sound somewhat similar to a ukulele. Typically made from the shell of an armadillo, thankfully these charangos were made of wood.

While in the market I came across another tourist from Europe.  He exclaimed that he was disappointed in the market because the street venders were only interested in trying to sell him things. Hmmmm... I thought to myself for a moment.... then I mentioned to him... well this is a "market"... a place to buy and sell things. I understood what he meant, but thought that his comment was a bit odd. 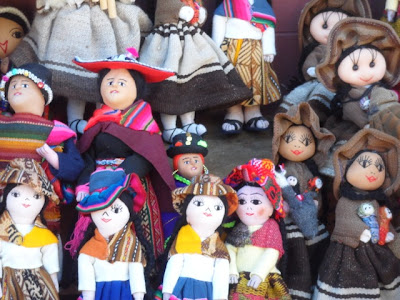 As expected, there were a number of items made especially for tourists. 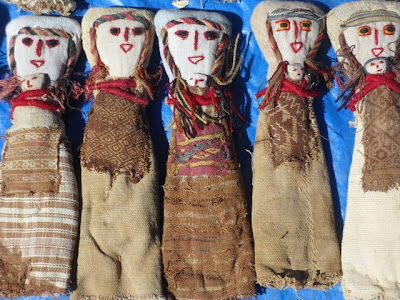 However, these dolls appeared to be more traditional and perhaps for other purposes. 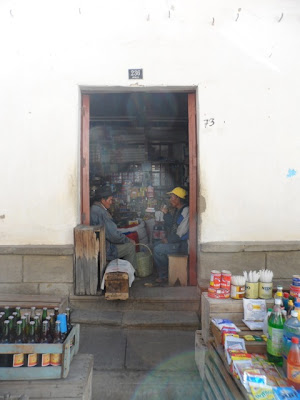 Russell and I continued walking around, just taking in the local culture. Here are two gentlemen sitting inside the doorway of a store, just chatting and drinking one of the local concoctions. 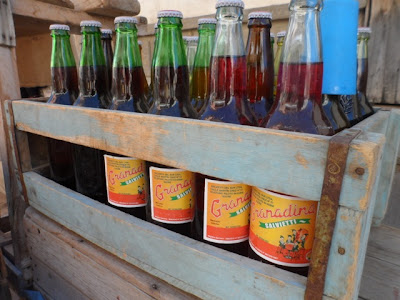 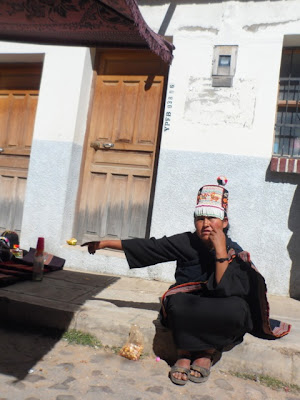 If you wander around long enough in Tarabuco or get directions from a local, you might find the real local market. 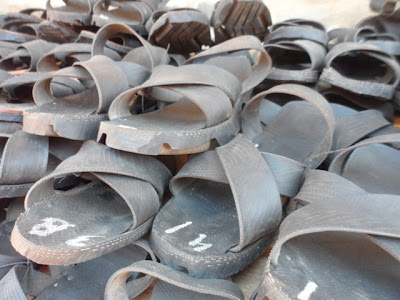 Where they sell real chacos made from the tread of old tires. 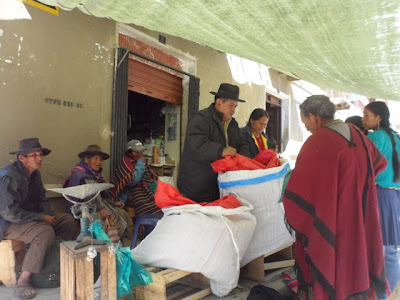 They sell items in bulk.... 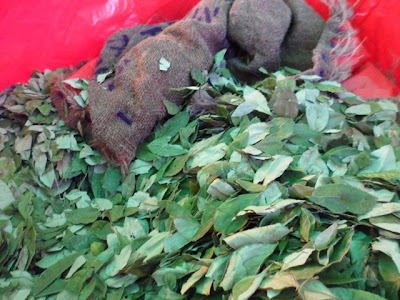 like coca leaves (used for chewing, tea, medicine and occasionally other uses). 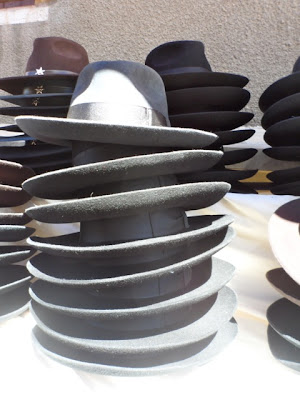 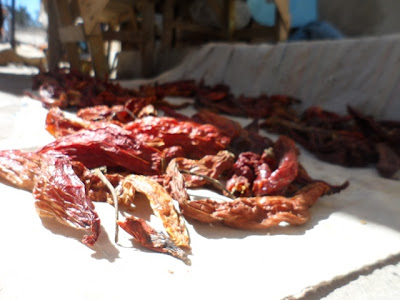 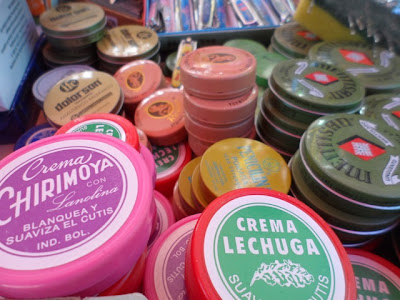 Balms for all types of ailments. 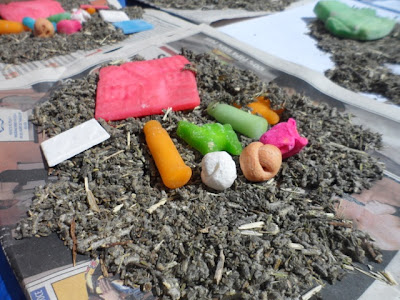 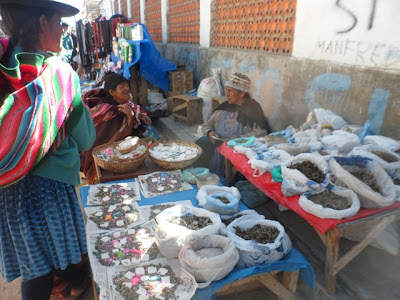 In some cases, celebrants assist traditional priests, known as yatiris in Aymara, in performing ancient rites to bring good luck or the good will of the goddess. 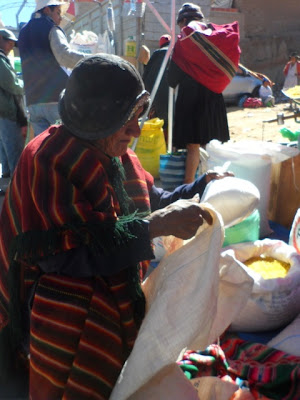 This man dressed in a traditional outfit was buying grain by the bulk. 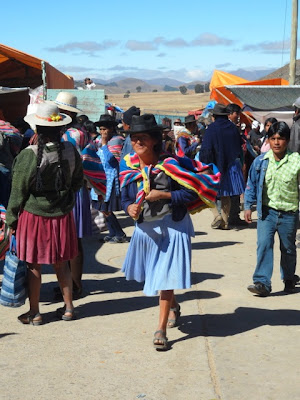 In this area of the market I did not see any tourists, just locals going about their regular routine of shopping. 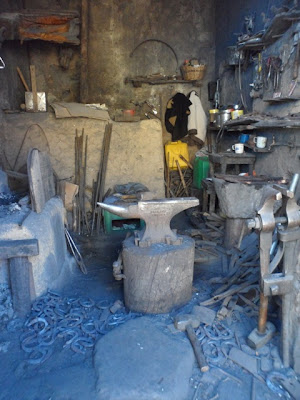 As I was walking down the street this scene caught my eye. It was a blacksmith's shop. The natural light from the outside was casting light inside the workshop perfectly to highlight the anvil. The furnace was stoked, the craftsman's tools were hanging on the wall, and remnants of the man's work laid about the floor. It was a scene strait out of the 1800's. 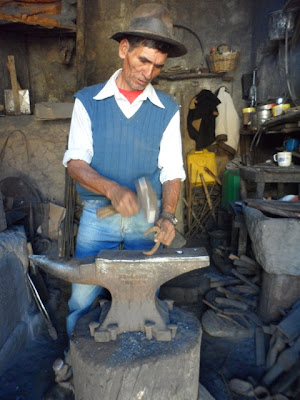 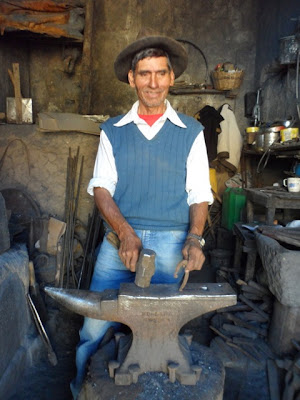 I then asked him if I could take a photo of him and his workshop. He stood proudly and said ok. 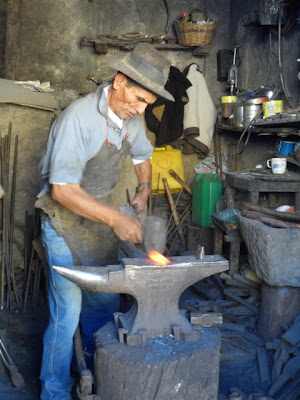 He then went into a demonstration of how he stoked the furnace to heat the steal. And, how he pounded the steel to form a shape. Amazing.

Here is a short 1 minute video with the master at work. 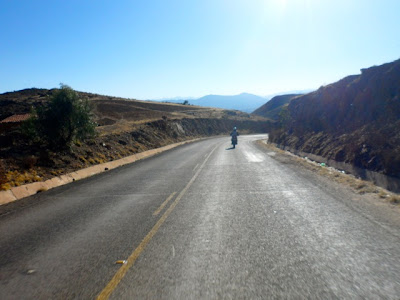 Russell and I walked around a little more. Then called it a day and rode back to Sucre.

There seems to be layers in life in Bolivia. Sometimes one just needs to slow down,  wander, perhaps get lost to uncover the really good parts.