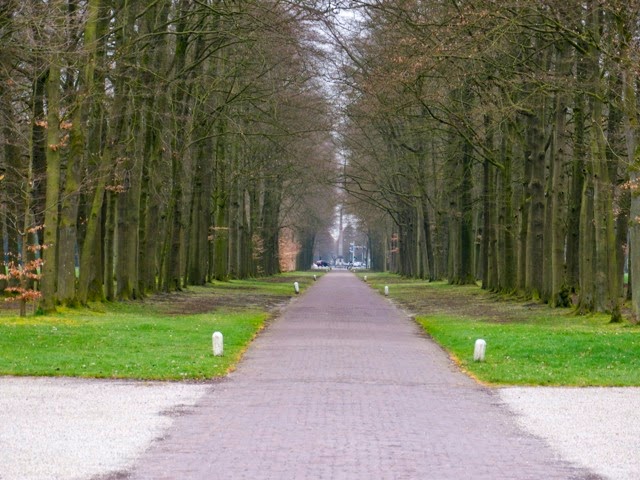 Our river boat moved during the night to the town of Arnhem. In the 19th century, Arnhem was a genteel resort town famous for its picturesque beauty. It was known mainly because a number of rich sugar barons or planters from the Indies settled in the area. Even now the city is famous for its parks and greenery. The hilly terrain around the city is also quite unusual for the Netherlands.

During World War II Arnhem experienced battles and bombings. There were ruins of some bombed structures in parts of the city that have now been converted to memorials. Because of the destruction that occurred during the war, many neighborhoods now consist of more modern architecture structures compared to other cities in The Netherlands. But we really did not come to see the modern buildings. 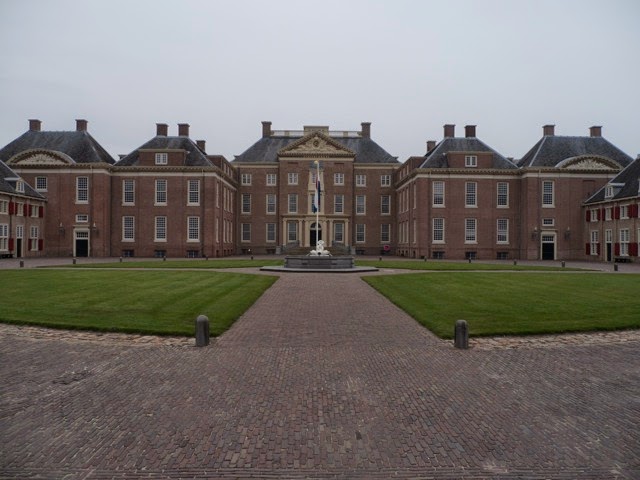 We came to see a palace. The Paleis Het Loo (The Woods Palace) is a palace on the outskirts of Arnhem. The symmetrical Dutch Baroque building was built between 1684 and 1686 for King William III. 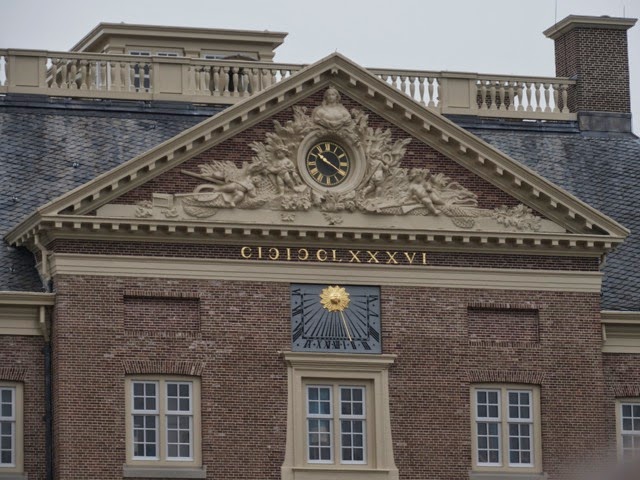 The palace was a residence of the House of Orange-Nassau from the 17th century until the death of Queen Wilhelmina in 1962. 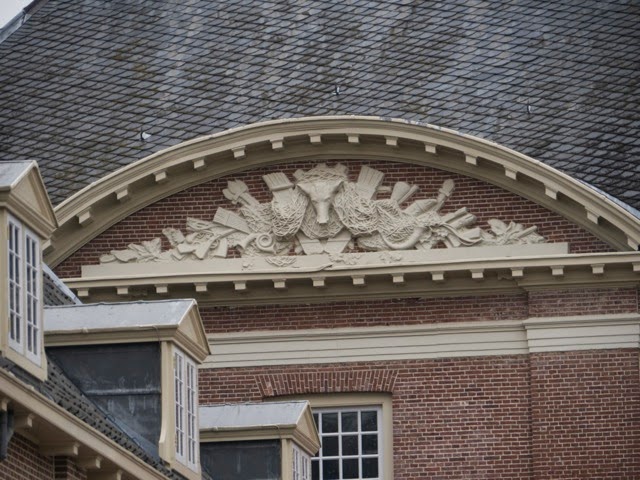 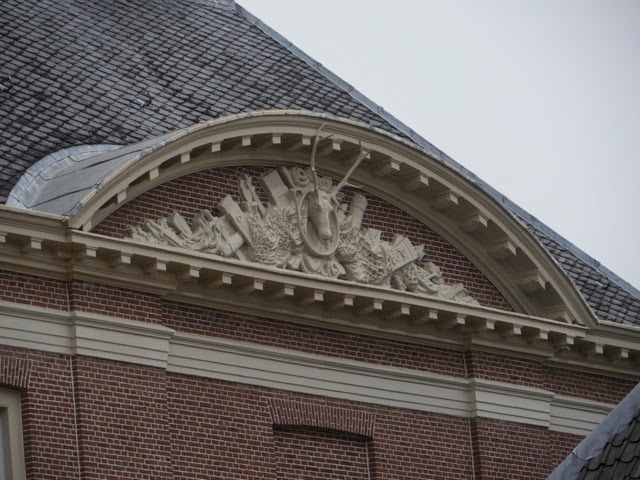 This facade contains a stag's head in tribute to the hunt. 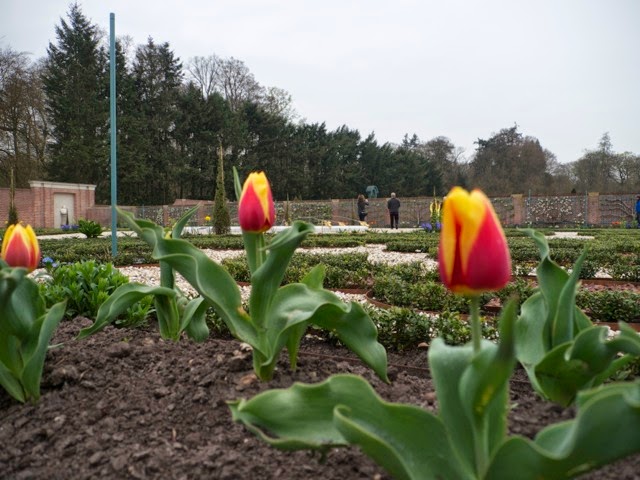 We first walked around the palace and through the garden which was designed by Claude Desgotz. 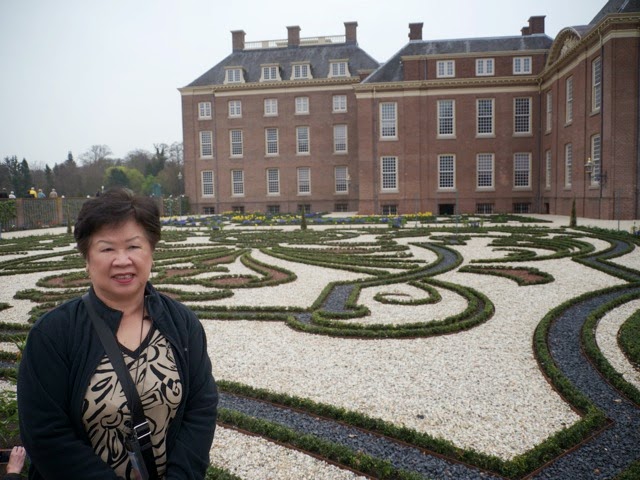 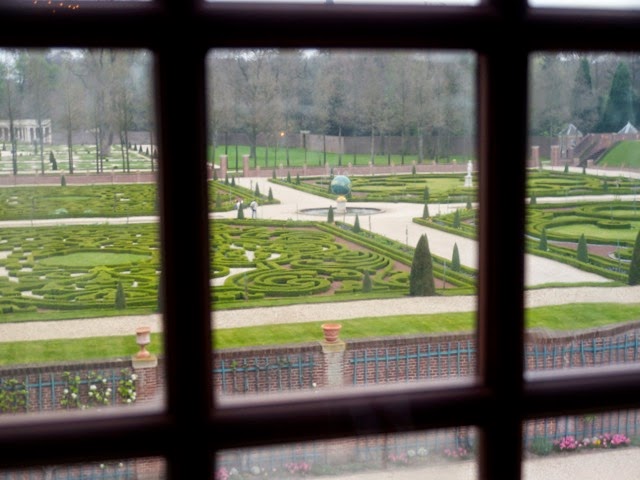 The private "Great Garden" situated in the back of the palace contained more conservative rectangular beds instead of more elaborately shaped ones. It was an enclosed space surrounded by raised walks, as a Renaissance garden might be, tucked into the woods for private enjoyment. 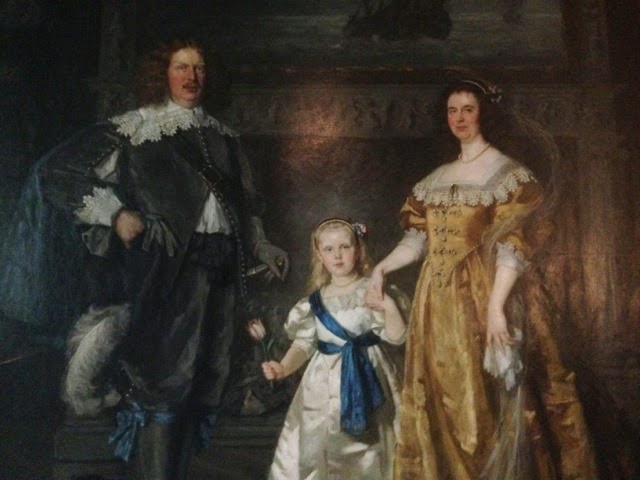 We entered the palace and learned a little about the history of the monarchy of The Netherlands. The painting above is of the royal family of the House of Orange-Nassau with King William III and the future heiress Wilhelmina.

The Netherlands has been a constitutional monarchy since 1815 and a parliamentary democracy since 1848. The monarchy has been passed down through the House of Orange-Nassau. The dynasty was established as a result of the marriage of Henry III of Nassau-Breda from Germany and Claudia of Châlon-Orange from French Burgundy in 1515.

Since 1984, the palace has served as a state museum open for the general public, showing interiors with original furniture, objects and paintings of the House of Orange-Nassau. 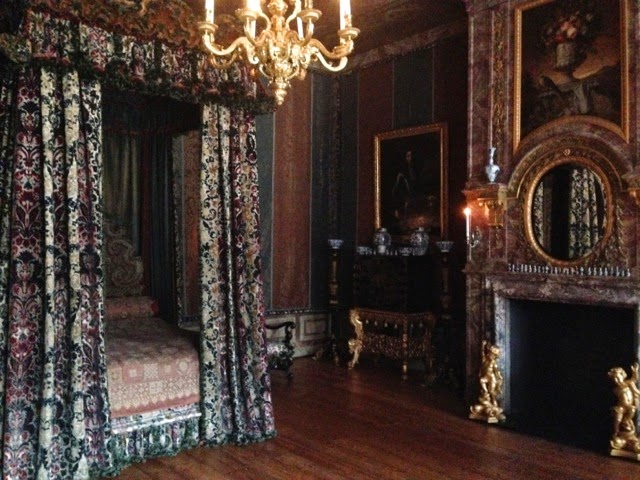 Inside the palace there was room after room decorated primarily in Baroque style. 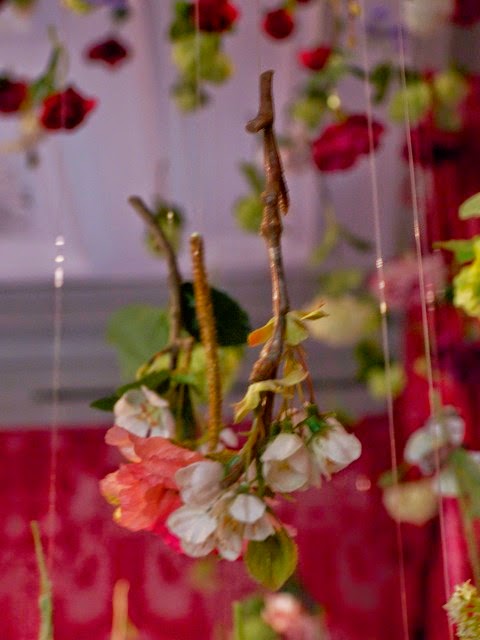 But since the palace is now also a museum, there were some exhibits of art like this display of suspended flowers. 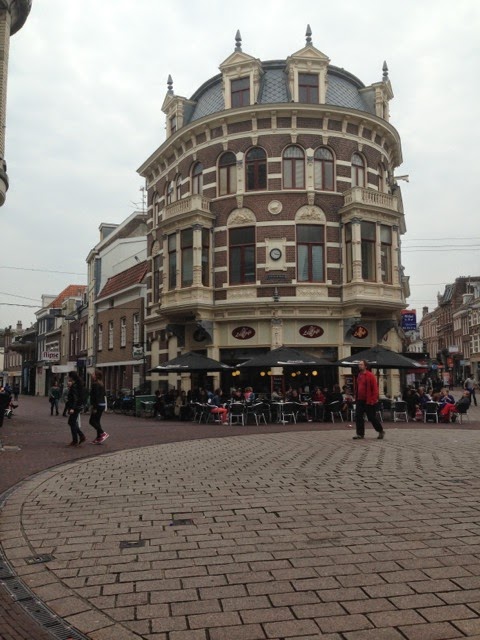 Later in the afternoon, we took a walk around the downtown commercial area. It was bustling with shoppers and cafe loungers. 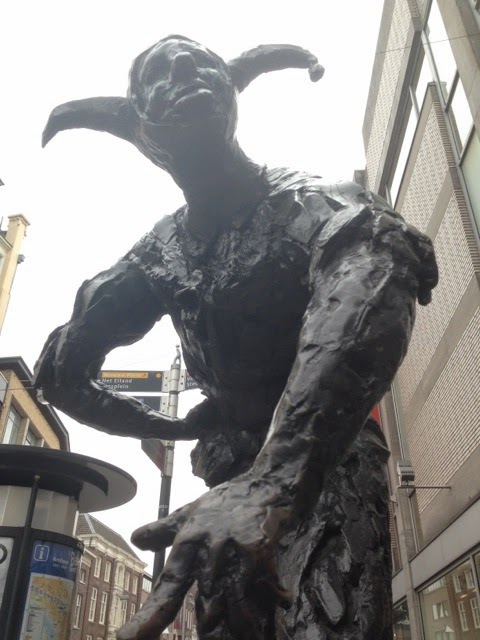 This jester seemed to be having a good time. 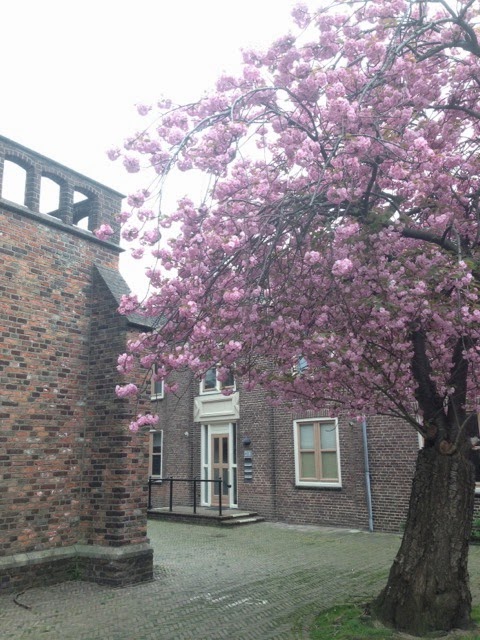 We passed by this church and this nook which had a cherry blossom tree in full bloom. 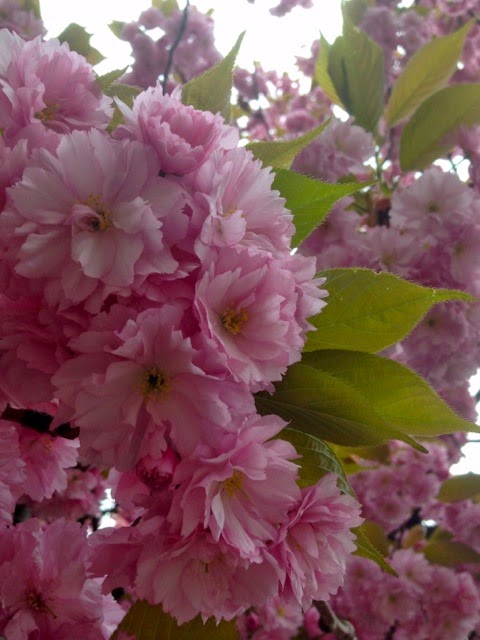 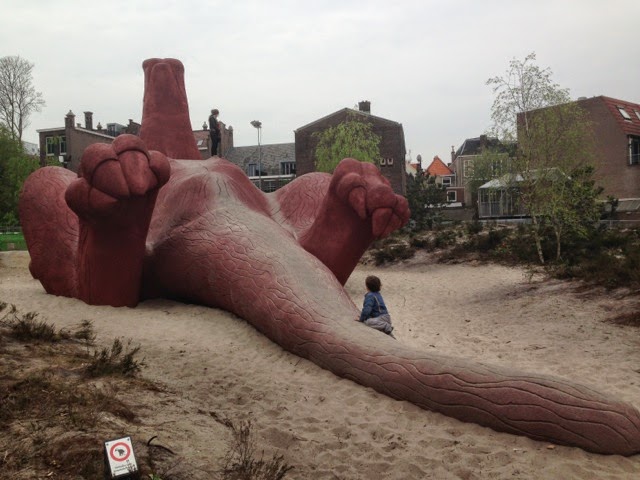 In the center of town was this huge reclining aardvark. The local kids seemed to be having a good time walking up its tail and hanging out on its stomach. 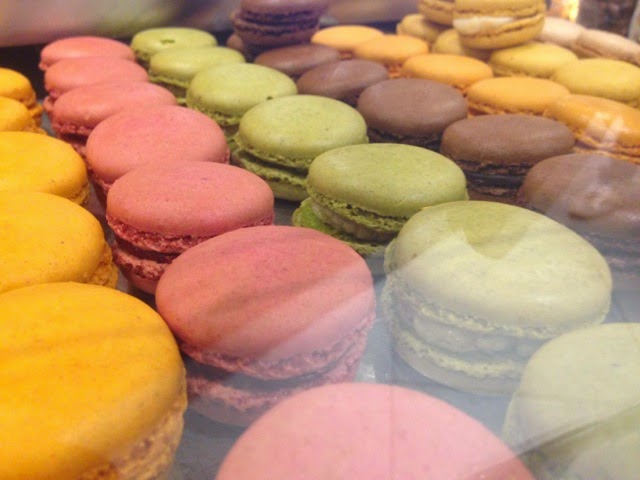 We went inside a department store to see what the locals might be buying. It turns out that they had a really nice sweet shop inside the store with these Dutch macaroon meringues. 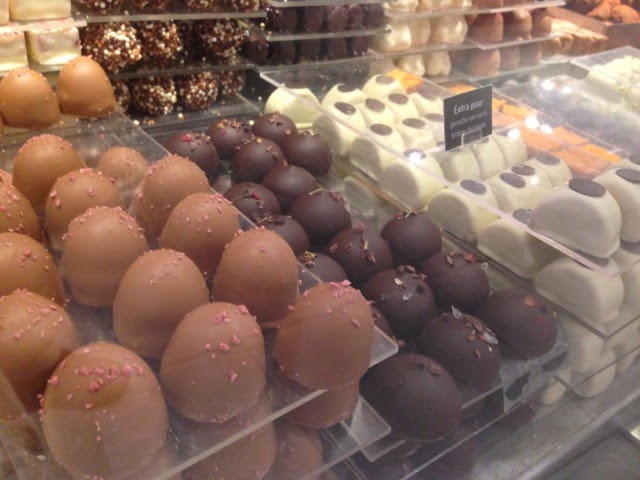 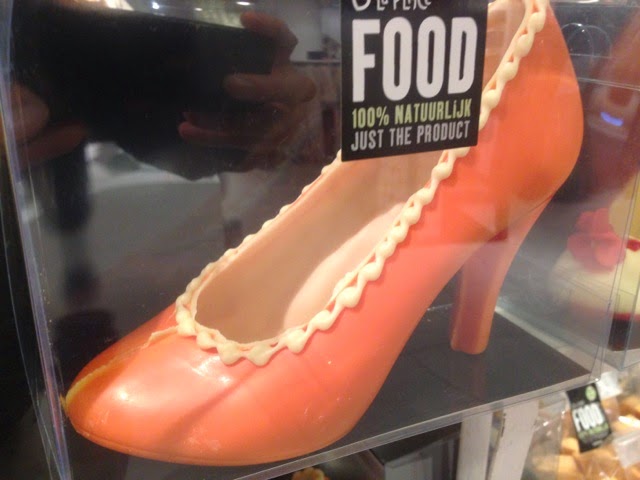 And a chocolate shoe… every woman's dream. 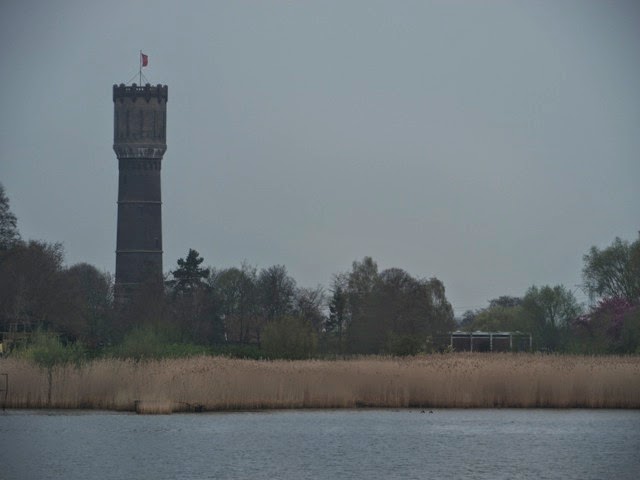 We returned to our river boat, enjoyed dinner and set sail for the next destination.
By Troy - April 23, 2014

Email ThisBlogThis!Share to TwitterShare to FacebookShare to Pinterest
Location: Arnhem, The Netherlands