I was walking around the Palermo neighborhood of Buenos Aires. It is one of the nicer areas of the city which contains boutiques, cafes, galleries and some interesting architecture. 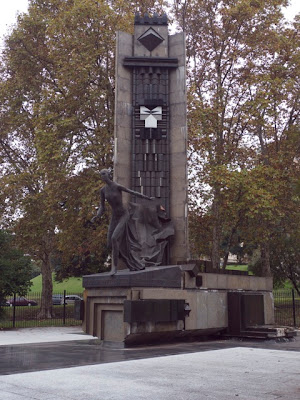 I stopped to take a photo of a statue of Evita.

While I was standing and facing the statue I felt something splash on my back and legs. I looked down toward my leg on which I found a green goopy liquid. I quickly looked around. The substance looked like bird poop. I looked up to see if a bird had passed by and sprayed me. All of this was within a few seconds.

At the same time a couple walked by and sympathetically pointed at my leg then up to the sky and said "un pajaro". Indicating that a bird had flown by and pooped on me.

The lady tried to use the water and tissue to clean the spots of goop. I said, "Gracias, tengo papel". Indicating that I had my own tissue. She still offered her water and tissue.

The man said, "Hay algo en su esplada". Indicating that there was goop on my back. The lady said, "Quitala." Indicating that I should take off my jacket. As I started to remove my jacket to see what was on my back. They both approached me closer. The woman was trying to offer the water and tissue to clean my jacket. And the man was pointing at my pants and making gestures as if he was brushing my pants clean.

Something inside me told me that they were too close to me. We Americans have a fairly large personal space barrier that we like to preserve. About 3 feet (1 meter) is all that we can tolerate when someone we do not know trespasses into our personal space. In other cultures the personal space barrier is much closer, including Latin American culture. I didn't want to offend the couple, but I felt that something was wrong.

I happened to have my sunglasses on and was watching both of them. They couldn't see my eyes. I saw the man get close to my right front pocket where I was carrying my wallet. I realized that this was a con...a pickpocket con.

There was an awkward pause.

The lady actually pointed to my camera inside my jacket pocket and said, "Arededor su cuerro es mejor". Indicating with her hands that it is better to carry my camera around my neck". I thought... how strange... better for me... or better for her.

They backed away and started walking off.

Luckily I was traveling light and it was a quick check list. I even checked inside my wallet to make sure that all was okay. I had everything.

As I glanced around to see where the couple had gone, I noticed that they were entering a cab. I thought... yes definitely a con. They looked back at me as they entered the cab and then sped away.

Yes, definitely a con. I remember that that were walking towards the building in front of me when they originally passed me, yet they had turned completely around, walked the other direction and got into the cab.

I've actually read about this type of con somewhere online. 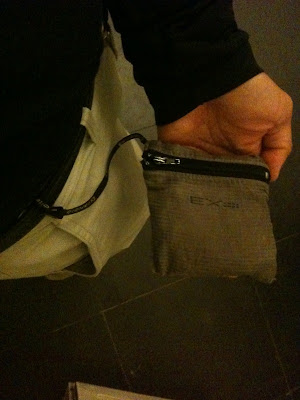 My wallet is a little pouch with a cord attaching it to my pants. I don't know if it served as a deterrent or not. Looking back, I still could have been pick pocketed or robbed. They could have stolen my camera or iPhone.

It was a close encounter and it makes a good travel story. Fortunately it had a good ending.

Be careful out there... I will.

1. Sandwiching: One pickpocket stops suddenly in a narrow street causing the victim to bump into them. The second pickpocket bumps into the victim and lifts their wallet.
2. Bad Samaritans: One pickpocket drops their bag and papers fly out. The victim and another pickpocket stop to help at which point the victim is dipped. In casinos, a bucket of coins may be dropped, the sound drawing the victim’s attention.
3. Pressure Misdirection: The pickpocket puts a large amount of pressure on one part of the victim’s body to draw attention away from the smaller action of the theft. E.g. they may fall on a train and grab the victim’s shoulder to steady themselves.
4. Cardboard Children: In Rome, a large group of children carry cardboard signs will surround the victim, begging for money. The signs are used as cover for the pickpocket to work.
5. Dangles: Anything left hanging from a pocket or bag is a potential target.
6. Thieves At Work: The pickpocket hangs posters warning that “THIEVES OPERATE IN THIS AREA”. The victim then pats his wallet, telling the pickpocket where to look.
7. Strap Cutting: The con artist cuts the strap on a hand bag, bum bag/fanny pack or camera bag. This allows them to take the bag more easily.
8. Flat Tyre: In Spain, tourists have reported suddenly getting a flat tyre. A group of men stop to help them change the tyre, only to find out later on that the men have stolen from the boot of their car or pickpocketed them. It has been suggested that the tyres are damaged at traffic lights.
9. Throwing the baby out with...: The least subtle dip of all. The thief throws what appears to be a bundled baby at the victim. The baby is really just a doll but the victim drops their bag and a accomplice gets away with it.
10. Son Of A Beach: One pickpocket pretends to drown on the beach. When the victim rushes in to save them, another pickpocket comes and steals their wallet/clothes.
11. Sexy Distraction: A beautiful girl causes heads to turn by bending down in a short skirt or similar ruse. He accomplice uses the destraction to pick pockets. She might even spill something in the victim's lap and whilst dabbing his groin, steal his wallet!
12. Oh Shit: A blob of what looks l like bird poo lands on your shoulder. The con artist has actually dropped it there and, in helping you clean up, steals your wallet. It is unlikely for the pickpocket to carry bird poo around and so relies on ice cream, yogurt or something similar to make the mark. This can also be done with spilt food or drink.